Chinese cuisine is an important part of Chinese culture, which includes cuisines originating from the diverse regions of China as well as from Overseas Chinese who have settled in other parts of the world. Because of the Chinese diaspora and historical power of the country, Chinese cuisine has influenced many other cuisines in Asia, with modifications made to cater to local palates. Chinese food staples such as rice, soy sauce, noodles, tea, chili oil and tofu, and utensils such as chopsticks and the wok, can now be found worldwide. The preferences for seasoning and cooking techniques of Chinese provinces depend on differences in historical background and ethnic groups. Geographic features including mountains, rivers, forests, and deserts also have a strong effect on the local available ingredients, considering that the climate of China varies from tropical in the south to subarctic in the northeast. Imperial royal and noble preference also plays a role in the change of Chinese cuisine. Because of imperial expansion and trading, ingredients and cooking techniques from other cultures have been integrated into Chinese cuisines over time. The most praised Four Great Traditions are Chuan, Lu, Yue, and Huaiyang, representing cuisines of West, North, South, and East China, respectively. The modern Eight Cuisines of China are Anhui (), Guangdong (), Fujian (), Hunan (), Jiangsu (), Shandong (), Sichuan (), and Zhejiang () cuisines. 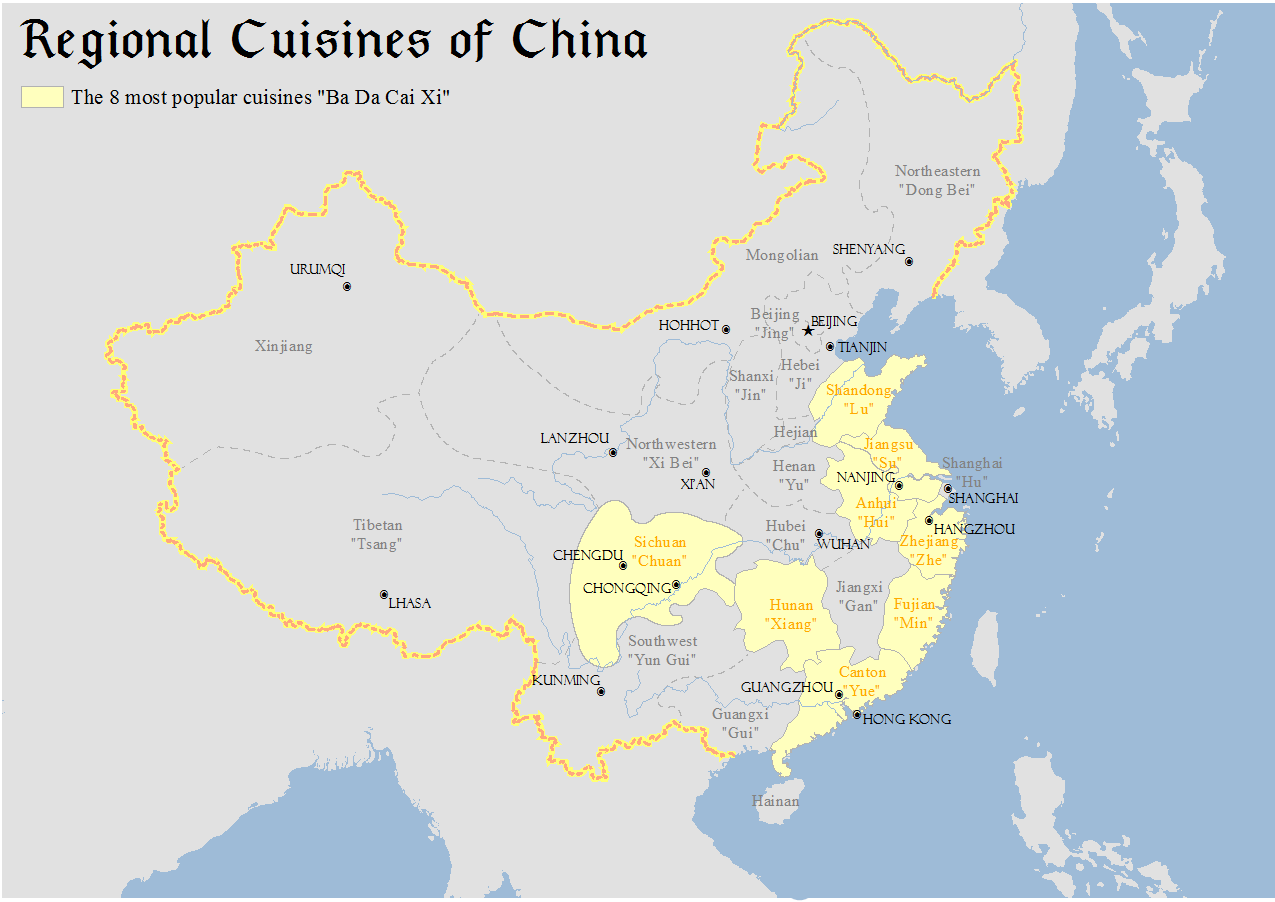 There are a variety of styles of cooking in China, but most Chinese chefs classified eight regional cuisines according to their distinct tastes and local characteristics. A number of different styles contribute to Chinese cuisine but perhaps the best known and most influential are Cantonese cuisine, Shandong cuisine, Jiangsu cuisine (specifically Huaiyang cuisine) and Sichuan cuisine. These styles are distinctive from one another due to factors such as availability of resources, climate, geography, history, cooking techniques and lifestyle. One style may favour the use of garlic and shallots over chili and spices, while another may favour preparing seafood over other meats and fowl. Jiangsu cuisine favours cooking techniques such as braising and stewing, while Sichuan cuisine employs baking. Zhejiang cuisine focuses more on serving fresh food and shares some traits in common with Japanese food. Fujian cuisine is famous for its delicious seafood and soups and the precise use of scintillating spices. Hunan cuisine is famous for its hot and sour taste. Anhui cuisine incorporates wild food for an unusual taste and is wilder than Fujian cuisine. Based on the raw materials and ingredients used, the method of preparation and cultural differences, a variety of foods with different flavors and textures are prepared in different regions of the country. Many traditional regional cuisines rely on basic methods of preservation such as drying, salting, pickling and fermentation. In addition, the "rice theory" attempts to describe cultural differences between north and south China; in the north, noodles are more consumed due to wheat being widely grown whereas in the south, rice is more preferred as it has historically been more cultivated there.

Chinese ancestors successfully planted millet, rice, and other grains about 9,000 and 8,000 years ago. As for wheat, another staple, it took another three or four thousand years. For the first time, grains provided people with a steady supply of food. Because of the lack of food, Chinese people have to adapt to the new eating habits. The meat was scarce at that time, so people cooked with small amounts of meat and rice or noodles.

Rice is a major staple food for people from rice farming areas in southern China. Steamed rice, usually white rice, is the most commonly eaten form. People in southern China also like to use rice to make congee as breakfast. Rice is also used to produce beer, baijiu and vinegars. Glutinous rice ("sticky rice") is a variety of rice used in special dishes such as lotus leaf rice and glutinous rice balls.

In wheat-farming areas in Northern China, people largely rely on flour-based food, such as noodles, ''bing'' (bread), ''jiaozi'' (a kind of Chinese dumplings), and ''mantou'' (a type of steamed buns).

Chinese noodles come dry or fresh in a variety of sizes, shapes and textures and are often served in soups or fried as toppings. Some varieties, such as Shou Mian (寿面, literally noodles of longevity), is an avatar of long life and good health according to Chinese traditions. Noodles can be served hot or cold with different toppings, with broth, and occasionally dry (as is the case with mi-fen). Noodles are commonly made with rice flour or wheat flour, but other flours such as soybean are also used in minor groups. 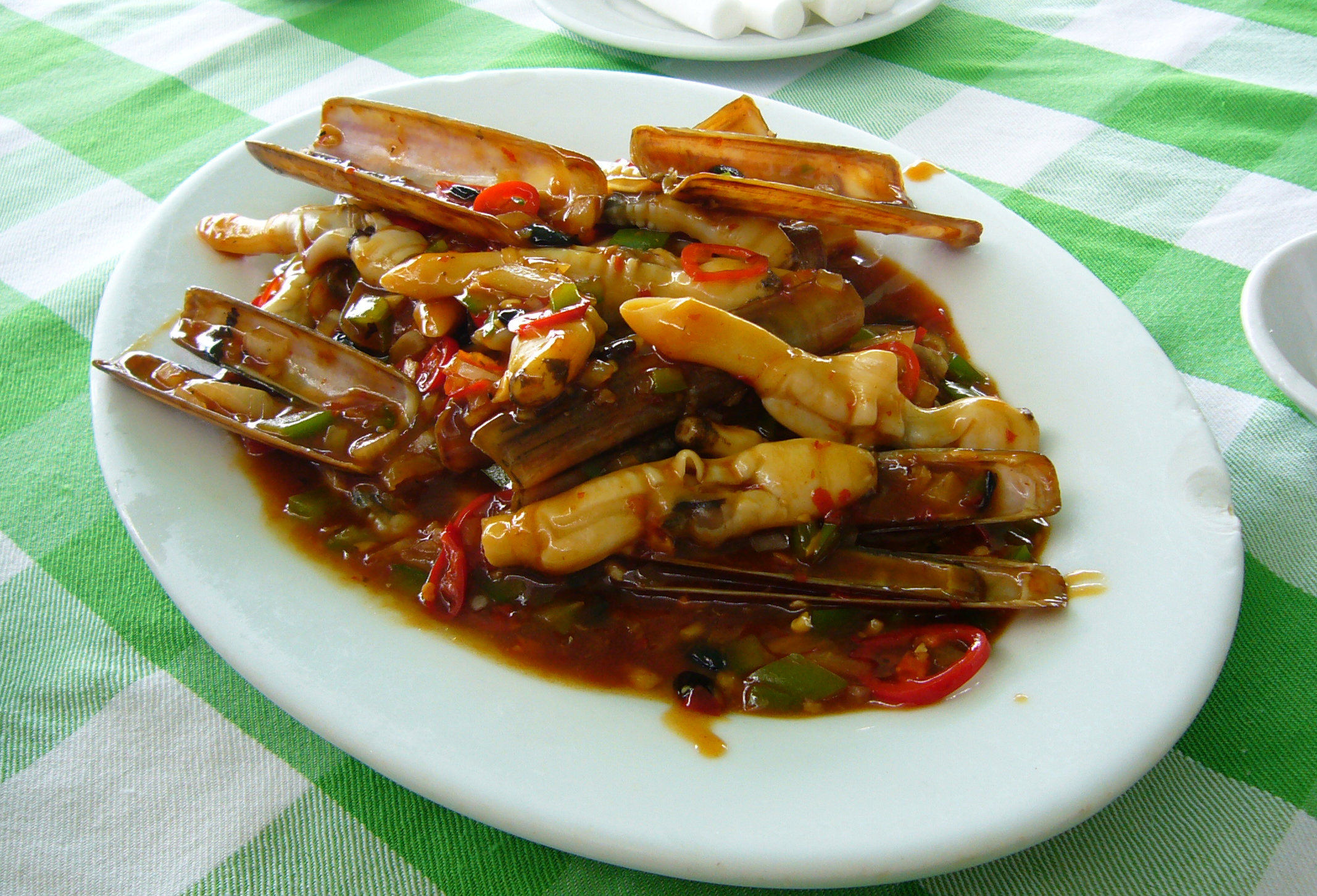 Tofu is made of soybeans and is another popular food product that supplies protein. The production process of tofu varies from region to region, resulting in different kinds of tofu with a wide range of texture and taste. Other products such as soy milk, soy paste, soy oil, and fermented soy sauce are also important in Chinese cooking. There are many kinds of soybean products, including tofu skin, smoked tofu, dried tofu, and fried tofu. Stinky tofu is fermented tofu. Like blue cheese or durian, it has a very distinct, potent and strong smell, and is an acquired taste. Hard stinky tofu is often deep-fried and paired with soy sauce or salty spice. Soft stinky tofu are usually used as a spread on steamed buns. Doufuru is another type of fermented tofu that has a salty taste. Doufuru can be pickled together with soy beans, red yeast rice or chili to create different color and flavor. This is more of a pickled type of tofu and is not as strongly scented as stinky tofu. Doufuru has the consistency of slightly soft blue cheese, and a taste similar to Japanese miso paste, but less salty. Doufuru can be used as a spread on steamed buns, or paired with rice congee.

Apart from vegetables that can be commonly seen, some unique vegetables used in Chinese cuisine include baby corn, bok choy, snow peas, Chinese eggplant, Chinese broccoli, and straw mushrooms. Other vegetables including bean sprouts, pea vine tips, watercress, lotus roots, chestnuts, water chestnuts, and bamboo shoots are also used in different cuisines of China. Because of different climate and soil conditions, cultivars of green beans, peas, and mushrooms can be found in rich variety. A variety of dried or pickled vegetables are also processed, especially in drier or colder regions where fresh vegetables were hard to get out of season.

Generally, seasonal fruits serve as the most common form of dessert consumed after dinner. Dim sum (點心), originally means small portion of food, can refer to dessert, pastries. Later to avoid the disambiguation, tian dian (甜點) and gao dian (糕點) are used to describe desserts and pastries. Chinese desserts are sweet foods and dishes that are served with tea, usually during the meal, or at the end of meals in Chinese cuisine. Besides being served as dim sum along with tea, pastries are used for celebration of traditional festivals. The most famous one is moon cake, used to celebrate the Mid-Autumn Festival. A wide variety of Chinese desserts are available, mainly including steamed and boiled sweet snacks. Bing is an umbrella term for all breads in Chinese, also including pastries and sweets. These are baked wheat-flour-based confections, with different stuffings including red bean paste, jujube, and a variety of others. Su (酥) is another kind of pastry made with more amount of oil, making the confection more friable. Chinese candies and sweets, called ''táng'' (糖)