A , often abbreviated as VN, is an interactive fiction video game genre, featuring text-based story with narrative style of literature and interactivity aided by static or sprite-based visuals, most often using anime-style art or occasionally live-action stills (and sometimes video footage). As the name suggests, they resemble mixed-media novels. Visual novels originated in and are especially prevalent in Japan, where they made up nearly 70% of the PC game titles released in 2006. In Japanese, a distinction is often made between visual novels (NVL, from "novel"), which consist primarily of narration and have very few interactive elements, and adventure games (AVG or ADV, from "adventure"), which incorporate problem-solving and other types of gameplay. This distinction is normally lost outside Japan, where both NVLs and ADVs are commonly referred to as "visual novels" by international fans. Visual novels are rarely produced for video game consoles, but the more popular games have occasionally been ported to systems such as the Sega Saturn, Dreamcast, PlayStation Portable, or Xbox 360. The more famous visual novels are also often adapted into light novels, manga or anime. The market for visual novels outside of East Asia is small, though a number of anime based on visual novels are popular among anime fans in the Western world; examples include ''Clannad'', ''Steins;Gate'', and ''Fate/stay night''.

Visual novels are distinguished from other game types by their generally minimal gameplay. Typically the majority of player interaction is limited to clicking to keep the text, graphics and sound moving (many recent games offer "play" or "fast-forward" toggles that make this unnecessary), while making narrative choices along the way. Another main characteristic of visual novels are its strong emphasis on the prose, as the narration in visual novels are delivered through text. This characteristic makes playing visual novels similar to reading a book. Most visual novels have multiple storylines and more than one ending; the mechanic in these cases typically consists of intermittent multiple-choice decision points, where the player selects a direction in which to take the game. For example, in a dating simulator-themed visual novel, the player is prompted to pick different girls to date which, in turn, leads to a different ending. This style of gameplay is similar to story-driven interactive fiction, or the shorter and less detailed real-life gamebook books. Many fans of visual novels hold them up as exceptions to the relatively weak storytelling in video games overall. Some visual novels do not limit themselves into merely interactive fictions, but also incorporate other elements into them. An example of this approach is ''Symphonic Rain'', where the player is required to play a musical instrument of some sort, and attain a good score in order to advance. Usually such an element is related as a plot device in the game. Fan-created novel games are reasonably popular; there are a number of free game engines and construction kits aimed at making them easy to construct, most notably NScripter, KiriKiri and Ren'Py. Many visual novels use voice actors to provide voices for the characters in the game. Often, the protagonist is left unvoiced, even when the rest of the characters are fully voiced. This choice is meant to aid the player in identifying with the protagonist and to avoid having to record large amounts of dialogue, as the main character typically has the most speaking lines due to the branching nature of visual novels. 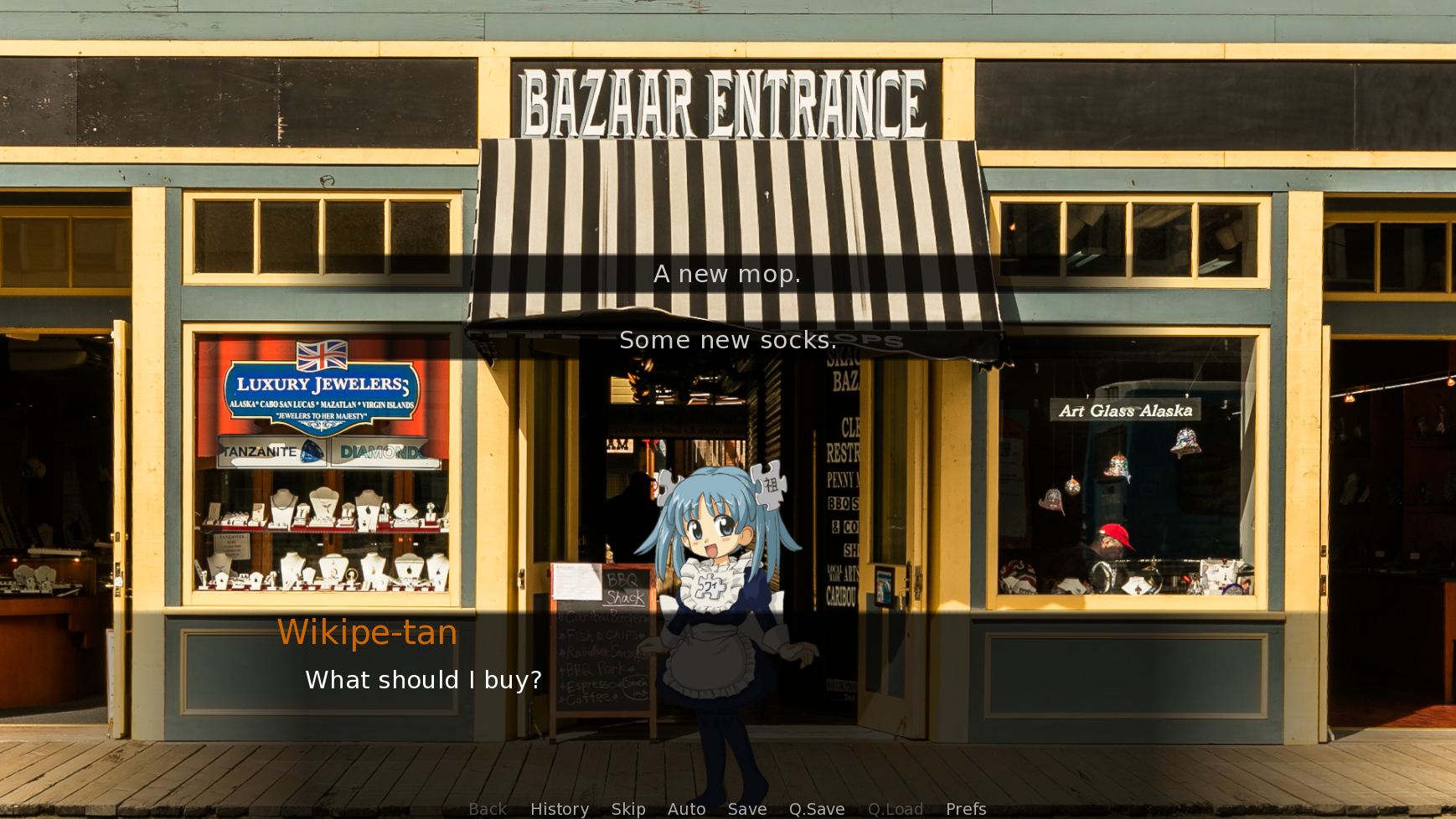 Non-linear branching storylines are a common trend in visual novels, which frequently use multiple branching storylines to achieve multiple different endings, allowing non-linear freedom of choice along the way, similar to a choose-your-own-adventure novel. Decision points within a visual novel often present players with the option of altering the course of events during the game, leading to many different possible outcomes. An acclaimed example is ''Zero Escape: Virtue's Last Reward'', where nearly every action and dialogue choice can lead to entirely new branching paths and endings. Each path only reveals certain aspects of the overall storyline and it is only after uncovering all the possible different paths and outcomes, through multiple playthroughs, that every component comes together to form a coherent, well-written story. The digital medium in visual novels allow for significant improvements, such as being able to fully explore multiple aspects and perspectives of a story. Another improvement is having hidden decision points that are automatically determined based on the player's past decisions. In ''Fate/stay night'', for example, the way the player character behaved towards non-player characters during the course of the game affects the way they react to the player character in later scenes, such as whether or not they choose to help in life-or-death situations. This would be far more difficult to track with physical books. More importantly, visual novels do not face the same length restrictions as a physical book. For example, the total word count of the English fan translation of ''Fate/stay night'', taking all the branching paths into account, exceeds that of ''The Lord of the Rings'' by almost 80%. This significant increase in length allows visual novels to tell stories as long and complex as those often found in traditional novels, while still maintaining a branching path structure, and allowing them to focus on complex stories with mature themes and consistent plots in a way which ''Choose Your Own Adventure'' books were unable to do due to their physical limitations. Visual novels with non-branching plots, such as ''Higurashi When They Cry'', ''Planetarian: The Reverie of a Little Planet'', ''Muv-Luv Alternative'', and ''Digital: A Love Story'' are rare exceptions within the genre, and are known as kinetic novels. Many visual novels often revolve almost entirely around character interactions and dialogue choices usually featuring complex branching dialogues and often presenting the player's possible responses word-for-word as the player character would say them. Such titles revolving around relationship-building, including visual novels as well as dating simulations, such as ''Tokimeki Memorial'', and some role-playing video games, such as ''Shin Megami Tensei: Persona'', often give choices that have a different number of associated "mood points" that influence a player character's relationship and future conversations with a non-player character. These games often feature a day-night cycle with a time scheduling system that provides context and relevance to character interactions, allowing players to choose when and if to interact with certain characters, which in turn influences their responses during later conversations. It is not uncommon for visual novels to have morality systems. A well-known example is the 2005 title ''School Days'', an animated visual novel that Kotaku describes as going well beyond the usual "black and white choice systems" (referring to video games such as ''Mass Effect'', ''Fallout 3'' and ''BioShock'') where you "pick a side and stick with it" while leaving "the expansive middle area between unexplored". ''School Days'' instead encourages players to explore the grey, neutral middle-ground in order to view the more interesting, "bad" endings, i. e. an ending where a character dies or the main protagonist does not advance towards the flow of the story.

There are role-playing video games that feature visual novel-style elements. A well-known example in the West is Mistwalker's ''Lost Odyssey'', an RPG that features a series of visual novel-style flashback sequences called "A Thousand Years of Dreams". These sequences were penned by an award-winning Japanese short story writer, Kiyoshi Shigematsu. Another title is the Arc System Works fighting game series ''BlazBlue'', which plays off of a complex fantasy setting where a one-hundred-year period is reset indefinitely with many variables. The many branching storylines in Story Mode can serve as stand-alone stories, but players must consider them together along with Arcade Mode stories to be able to fully understand the universe. Another successful example is Sega's ''Sakura Wars'' series, which combined tactical role-playing game combat with visual novel elements, introducing a real-time branching choice system where, during an event or conversation, the player must choose an action or dialogue choice within a time limit, or to not respond at all within that time. The player's choice, or lack thereof, affects the player character's relationship with other characters and in turn the characters' performance in battle, the direction of the storyline, and the ending. Later games in the series added several variations, including an action gauge that can be raised up or down depending on the situation, and a gauge that the player can manipulate using the analog stick depending on the situation. The success of ''Sakura Wars'' led to a wave of games that combine role-playing and visual novel elements, including ''Thousand Arms'', ''Riviera: The Promised Land'', and ''Luminous Arc''.

Despite using the narrative style of literature, visual novels have evolved a style somewhat different from print novels. In general, visual novels are more likely to be narrated in the first person than the third, and typically present events from the point of view of only one character. In the typical visual novel, the graphics comprise a set of generic backgrounds (normally just one for each location in the game), with character superimposed onto these; the perspective is usually first-person, with the protagonist remaining unseen. At certain key moments in the plot, special ''event CG'' computer graphics are displayed instead; these are more detailed images, drawn specially for that scene rather than being composed from predefined elements, which often use more cinematic camera angles and include the protagonist. These event CGs can usually be viewed at any time once they have been "unlocked" by finding them in-game; this provides a motivation to replay the game and try making different decisions, as it is normally impossible to view all special events on a single play-through. Up until the 1990s, the majority of visual novels utilized pixel art. This was particularly common on the NEC PC-9801 format, which showcased what is considered to be some of the best pixel art in the history of video games, with a popular example being ''Policenauts'' in 1994.