Distillation, or classical distillation, is the process of separating the components or substances from a liquid mixture by using selective boiling and condensation. Dry distillation is the heating of solid materials to produce gaseous products (which may condense into liquids or solids). Dry distillation may involve chemical changes such as destructive distillation or cracking and is not discussed under this article. Distillation may result in essentially complete separation (nearly pure components), or it may be a partial separation that increases the concentration of selected components in the mixture. In either case, the process exploits differences in the relative volatility of the mixture's components. In industrial applications, distillation is a unit operation of practically universal importance, but it is a physical separation process, not a chemical reaction. Distillation has many applications. For example: * The distillation of fermented products produces distilled beverages with a high alcohol content, or separates other fermentation products of commercial value. * Distillation is an effective and traditional method of desalination. * In the petroleum industry, oil stabilization is a form of partial distillation that reduces the vapor pressure of crude oil, thereby making it safe for storage and transport as well as reducing the atmospheric emissions of volatile hydrocarbons. In midstream operations at oil refineries, fractional distillation is a major class of operation for transforming crude oil into fuels and chemical feed stocks. * Cryogenic distillation leads to the separation of air into its components – notably oxygen, nitrogen, and argon – for industrial use. * In the chemical industry, large amounts of crude liquid products of chemical synthesis are distilled to separate them, either from other products, from impurities, or from unreacted starting materials. An installation used for distillation, especially of distilled beverages, is a distillery. The distillation equipment itself is a still.

Early evidence of distillation was found on Akkadian tablets dated c. 1200 BCE describing perfumery operations. The tablets provided textual evidence that an early primitive form of distillation was known to the Babylonians of ancient Mesopotamia. Early evidence of distillation was also found related to alchemists working in Alexandria in Roman Egypt in the 1st century CE. Distilled water has been in use since at least c. 200 CE, when Alexander of Aphrodisias described the process. Work on distilling other liquids continued in early Byzantine Egypt under Zosimus of Panopolis in the 3rd century. Distillation was practiced in the ancient Indian subcontinent, which is evident from baked clay retorts and receivers found at Taxila, Shaikhan Dheri, and Charsadda in modern Pakistan, dating to the early centuries of the Common Era. These "Gandhara stills" were only capable of producing very weak liquor, as there was no efficient means of collecting the vapors at low heat. Distillation in China may have begun during the Eastern Han dynasty (1st–2nd centuries CE), but the distillation of beverages began in the Jin (12th–13th centuries) and Southern Song (10th–13th centuries) dynasties, according to archaeological evidence. Medieval Muslim chemists such as Jābir ibn Ḥayyān (Latin: Geber, ninth century) and Abū Bakr al-Rāzī (Latin: Rhazes, 854–925) experimented extensively with the distillation of various substances. The distillation of wine is attested in Arabic works attributed to al-Kindī (c. 801–873 CE) and to al-Fārābī (c. 872–950), and in the 28th book of al-Zahrāwī's (Latin: Abulcasis, 936–1013) ''Kitāb al-Taṣrīf'' (later translated into Latin as ''Liber servatoris''). In the twelfth century, recipes for the production of ''aqua ardens'' ("burning water", i.e., ethanol) by distilling wine with salt started to appear in a number of Latin works, and by the end of the thirteenth century it had become a widely known substance among Western European chemists. Fractional distillation was developed by Tadeo Alderotti in the 13th century. A still was found in an archaeological site in Qinglong, Hebei province, in China, dating back to the 12th century. Distilled beverages were common during the Yuan dynasty (13th–14th centuries). In 1500, German alchemist Hieronymus Braunschweig published ''Liber de arte destillandi'' (''The Book of the Art of Distillation''), the first book solely dedicated to the subject of distillation, followed in 1512 by a much expanded version. In 1651, John French published ''The Art of Distillation'', the first major English compendium on the practice, but it has been claimed that much of it derives from Braunschweig's work. This includes diagrams with people in them showing the industrial rather than bench scale of the operation. 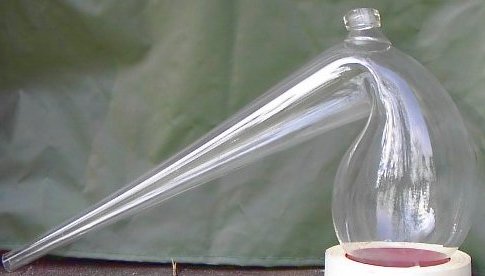 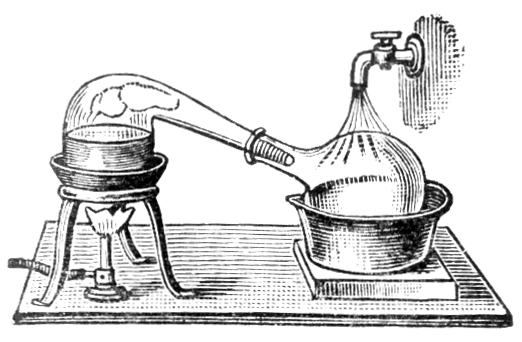 As alchemy evolved into the science of chemistry, vessels called retorts became used for distillations. Both alembics and retorts are forms of glassware with long necks pointing to the side at a downward angle to act as air-cooled condensers to condense the distillate and let it drip downward for collection. Later, copper alembics were invented. Riveted joints were often kept tight by using various mixtures, for instance a dough made of rye flour. These alembics often featured a cooling system around the beak, using cold water, for instance, which made the condensation of alcohol more efficient. These were called pot stills. Today, the retorts and pot stills have been largely supplanted by more efficient distillation methods in most industrial processes. However, the pot still is still widely used for the elaboration of some fine alcohols, such as cognac, Scotch whisky, Irish whiskey, tequila, rum, and some vodkas. Pot stills made of various materials (wood, clay, stainless steel) are also used by bootleggers in various countries. Small pot stills are also sold for use in the domestic production of flower water or essential oils. Early forms of distillation involved batch processes using one vaporization and one condensation. Purity was improved by further distillation of the condensate. Greater volumes were processed by simply repeating the distillation. Chemists reportedly carried out as many as 500 to 600 distillations in order to obtain a pure compound. In the early 19th century, the basics of modern techniques, including pre-heating and reflux, were developed.