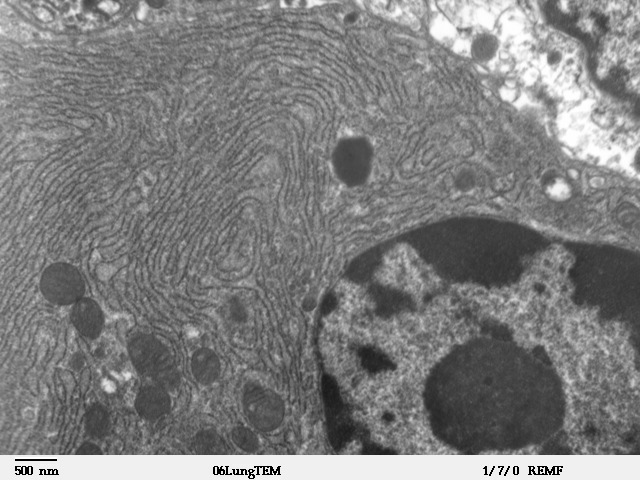 The ER was observed with light microscope by Garnier in 1897, who coined the term ''ergastoplasm''. With electron microscopy, the lacy membranes of the endoplasmic reticulum were first seen in 1945 by Keith R. Porter, Albert Claude, and Ernest F. Fullam. Later, the word ''reticulum'', which means "network", was applied by Porter in 1953 to describe this fabric of membranes.

3D rendering of endoplasmic reticulum The general structure of the endoplasmic reticulum is a network of membranes called cisternae. These sac-like structures are held together by the cytoskeleton. The phospholipid membrane encloses the cisternal space (or lumen), which is continuous with the perinuclear space but separate from the cytosol. The functions of the endoplasmic reticulum can be summarized as the synthesis and export of proteins and membrane lipids, but varies between ER and cell type and cell function. The quantity of both rough and smooth endoplasmic reticulum in a cell can slowly interchange from one type to the other, depending on the changing metabolic activities of the cell. Transformation can include embedding of new proteins in membrane as well as structural changes. Changes in protein content may occur without noticeable structural changes.

The surface of the rough endoplasmic reticulum (often abbreviated ''RER'' or ''rough ER''; also called ''granular endoplasmic reticulum'') is studded with protein-manufacturing ribosomes giving it a "rough" appearance (hence its name). The binding site of the ribosome on the rough endoplasmic reticulum is the translocon. However, the ribosomes are not a stable part of this organelle's structure as they are constantly being bound and released from the membrane. A ribosome only binds to the RER once a specific protein-nucleic acid complex forms in the cytosol. This special complex forms when a free ribosome begins translating the mRNA of a protein destined for the secretory pathway. The first 5–30 amino acids polymerized encode a signal peptide, a molecular message that is recognized and bound by a signal recognition particle (SRP). Translation pauses and the ribosome complex binds to the RER translocon where translation continues with the nascent (new) protein forming into the RER lumen and/or membrane. The protein is processed in the ER lumen by an enzyme (a signal peptidase), which removes the signal peptide. Ribosomes at this point may be released back into the cytosol; however, non-translating ribosomes are also known to stay associated with translocons. The membrane of the rough endoplasmic reticulum forms large double-membrane sheets that are located near, and continuous with, the outer layer of the nuclear envelope. The double membrane sheets are stacked and connected through several right- or left-handed helical ramps, the "Terasaki ramps", giving rise to a structure resembling a multi-story car park. Although there is no continuous membrane between the endoplasmic reticulum and the Golgi apparatus, membrane-bound transport vesicles shuttle proteins between these two compartments. Vesicles are surrounded by coating proteins called COPI and COPII. COPII targets vesicles to the Golgi apparatus and COPI marks them to be brought back to the rough endoplasmic reticulum. The rough endoplasmic reticulum works in concert with the Golgi complex to target new proteins to their proper destinations. The second method of transport out of the endoplasmic reticulum involves areas called membrane contact sites, where the membranes of the endoplasmic reticulum and other organelles are held closely together, allowing the transfer of lipids and other small molecules. The rough endoplasmic reticulum is key in multiple functions: * Manufacture of lysosomal enzymes with a mannose-6-phosphate marker added in the ''cis''-Golgi network. * Manufacture of secreted proteins, either secreted constitutively with no tag or secreted in a regulatory manner involving clathrin and paired basic amino acids in the signal peptide. * Integral membrane proteins that stay embedded in the membrane as vesicles exit and bind to new membranes. Rab proteins are key in targeting the membrane; SNAP and SNARE proteins are key in the fusion event. * Initial glycosylation as assembly continues. This is N-linked (O-linking occurs in the Golgi). ** N-linked glycosylation: If the protein is properly folded, oligosaccharyltransferase recognizes the AA sequence NXS or NXT (with the S/T residue phosphorylated) and adds a 14-sugar backbone (2-''N''-acetylglucosamine, 9-branching mannose, and 3-glucose at the end) to the side-chain nitrogen of Asn.

The endoplasmic reticulum serves many general functions, including the folding of protein molecules in sacs called cisternae and the transport of synthesized proteins in vesicles to the Golgi apparatus. Correct folding of newly made proteins is made possible by several endoplasmic reticulum chaperone proteins, including protein disulfide isomerase (PDI), ERp29, the Hsp70 family member BiP/Grp78, calnexin, calreticulin, and the peptidylpropyl isomerase family. Only properly folded proteins are transported from the rough ER to the Golgi apparatus – unfolded proteins cause an unfolded protein response as a stress response in the ER. Disturbances in redox regulation, calcium regulation, glucose deprivation, and viral infection or the over-expression of proteins can lead to endoplasmic reticulum stress response (ER stress), a state in which the folding of proteins slows, leading to an increase in unfolded proteins. This stress is emerging as a potential cause of damage in hypoxia/ischemia, insulin resistance, and other disorders.

Secretory proteins, mostly glycoproteins, are moved across the endoplasmic reticulum membrane. Proteins that are transported by the endoplasmic reticulum throughout the cell are marked with an address tag called a signal sequence. The N-terminus (one end) of a polypeptide chain (i.e., a protein) contains a few amino acids that work as an address tag, which are removed when the polypeptide reaches its destination. Nascent peptides reach the ER via the translocon, a membrane-embedded multiprotein complex. Proteins that are destined for places outside the endoplasmic reticulum are packed into transport vesicles and moved along the cytoskeleton toward their destination. In human fibroblasts, the ER is always co-distributed with microtubules and the depolymerisation of the latter cause its co-aggregation with mitochondria, which are also associated with the ER. The endoplasmic reticulum is also part of a protein sorting pathway. It is, in essence, the transportation system of the eukaryotic cell. The majority of its resident proteins are retained within it through a retention motif. This motif is composed of four amino acids at the end of the protein sequence. The most common retention sequences are KDEL for lumen located proteins and KKXX for transmembrane protein. However, variations of KDEL and KKXX do occur, and other sequences can also give rise to endoplasmic reticulum retention. It is not known whether such variation can lead to sub-ER localizations. There are three KDEL (1, 2 and 3) receptors in mammalian cells, and they have a very high degree of sequence identity. The functional differences between these receptors remain to be established.


Bioenergetics regulation of ER ATP supply by a CaATiER mechanism

The endoplasmic reticulum does not harbor an ATP-regeneration machinery, and therefore requires ATP import from mitochondria. The imported ATP is vital for the ER to carry out its house keeping cellular functions, such as for protein folding and trafficking. The ER ATP transporter, SLC35B1/AXER, was recently cloned and characterized, and the mitochondria supply ATP to the ER through a ''Ca2+-antagonized transport into the ER'' (''CaATiER'') mechanism. The ''CaATiER'' mechanism shows sensitivity to cytosolic Ca2+ ranging from high nM to low μM range, with the Ca2+-sensing element yet to be identified and validated.

Abnormalities in XBP1 lead to a heightened endoplasmic reticulum stress response and subsequently causes a higher susceptibility for inflammatory processes that may even contribute to Alzheimer's disease. In the colon, XBP1 anomalies have been linked to the inflammatory bowel diseases including Crohn's disease. The unfolded protein response (UPR) is a cellular stress response related to the endoplasmic reticulum. The UPR is activated in response to an accumulation of unfolded or misfolded proteins in the lumen of the endoplasmic reticulum. The UPR functions to restore normal function of the cell by halting protein translation, degrading misfolded proteins, and activating the signaling pathways that lead to increasing the production of molecular chaperones involved in protein folding. Sustained overactivation of the UPR has been implicated in prion diseases as well as several other neurodegenerative diseases and the inhibition of the UPR could become a treatment for those diseases.