Le Havre (, ; nrf|Lé Hâvre) is an urban French commune and city in the Seine-Maritime department in the Normandy region of northwestern France. It is situated on the right bank of the estuary of the river Seine on the Channel southwest of the Pays de Caux, very close to the Prime Meridian. Le Havre is the most populous commune of Upper Normandy, although the total population of the greater Le Havre conurbation is smaller than that of Rouen. After Reims, it is also the second largest subprefecture in France. The name ''Le Havre'' means "the harbour" or "the port". Its inhabitants are known as ''Havrais'' or ''Havraises''. The city and port were founded by King Francis I in 1517. Economic development in the Early modern period was hampered by religious wars, conflicts with the English, epidemics, and storms. It was from the end of the 18th century that Le Havre started growing and the port took off first with the slave trade then other international trade. After the 1944 bombings the firm of Auguste Perret began to rebuild the city in concrete. The oil, chemical, and automotive industries were dynamic during the Trente Glorieuses (postwar boom) but the 1970s marked the end of the golden age of ocean liners and the beginning of the economic crisis: the population declined, unemployment increased and remains at a high level today. Changes in years 1990–2000 were numerous. The right won the municipal elections and committed the city to the path of reconversion, seeking to develop the service sector and new industries (Aeronautics, Wind turbines). The Port 2000 project increased the container capacity to compete with ports of northern Europe, transformed the southern districts of the city, and ocean liners returned. Modern Le Havre remains deeply influenced by its employment and maritime traditions. Its port is the second largest in France, after that of Marseille, for total traffic, and the largest French container port. In 2005, UNESCO inscribed the central city of Le Havre as a World Heritage Site. The André Malraux Modern Art Museum is the second of France for the number of impressionist paintings. The city has been awarded two flowers by the National Council of Towns and Villages in Bloom in the Competition of cities and villages in Bloom.

Le Havre is located west of Rouen on the shore of the English Channel and at the mouth of the Seine. Numerous roads link to Le Havre with the main access roads being the A29 autoroute from Amiens and the A13 autoroute from Paris linking to the A131 autoroute. 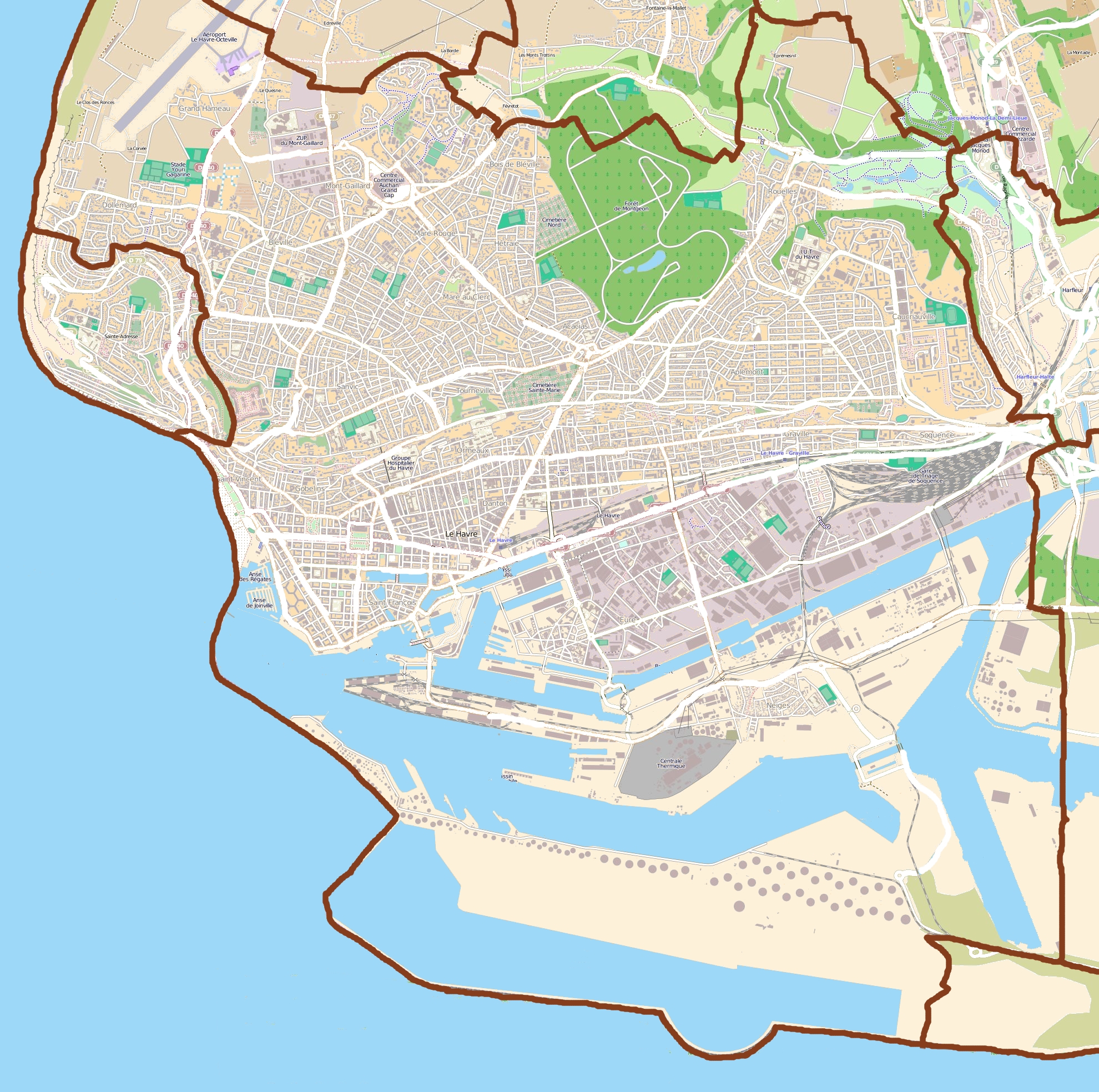 Administratively, Le Havre is a commune in the Normandy region in the west of the department of Seine-Maritime. The urban area of Le Havre corresponds roughly to the territory of the Agglomeration community of Le Havre (CODAH) which includes 17 communes and 250,000 people. It occupies the south-western tip of the natural region of Pays de Caux where it is the largest city. Le Havre is sandwiched between the coast of the Channel from south-west to north-west and the estuary of the Seine to the south.

Le Havre belongs to the Paris Basin which was formed in the Mesozoic period. The Paris Basin consists of sedimentary rocks. The commune of Le Havre consists of two areas separated by a natural cliff edge: one part in the lower part of the town to the south including the harbour, the city centre and the suburbs. It was built on former marshland and mudflats that were drained in the 16th century. The soil consists of several metres of alluvium or silt deposited by the Seine. The city centre was rebuilt after the Second World War using a metre of flattened rubble as a foundation. The upper town to the north, is part of the cauchois plateau: the neighbourhood of Dollemard is its highest point (between above sea level). The plateau is covered with a layer of flinty clay and a fertile silt. The bedrock consists of a large thickness of chalk measuring up to deep. Because of the slope the coast is affected by the risk of landslides.

Due to its location on the coast of the Channel, the climate of Le Havre is temperate oceanic. Days without wind are rare. There are maritime influences throughout the year. According to the records of the meteorological station of the Cap de la Heve (from 1961 to 1990), the temperature drops below on 24.9 days per year and it rises above on 11.3 days per year. The average annual sunshine duration is 1,785.8 hours per year.