)
| image_map = Algeria (centered orthographic projection).svg | map_caption = | image_map2 = | capital = Algiers | coordinates = | largest_city = capital | religion = | official_languages = | languages_type = Other languages | languages =Algerian Arabic (Darja)
French | ethnic_groups = | demonym = Algerian | government_type = Unitary semi-presidential constitutional republic | leader_title1 = President | leader_name1 = Abdelmadjid Tebboune | leader_title2 = Prime Minister | leader_name2 = Abdelaziz Djerad | leader_title3 = Council President | leader_name3 = Salah Goudjil | leader_title4 = Assembly President | leader_name4 = Slimane Chenine | legislature = Parliament | upper_house = Council of the Nation | lower_house = People's National Assembly | sovereignty_type = Formation | established_event1 = Numidia Unification | established_date1 = 202 BC | established_event2 = Zirid dynasty | established_date2 = 972 | established_event3 = Hammadid dynasty | established_date3 = 1015 | established_event4 = Zayyanid dynasty | established_date4 = 1236 | established_event5 = Al Jazâ'ir | established_date5 = 1516 | established_event6 = French occupation | established_date6 = 5 July 1830 | established_event7 = Independence from France | established_date7 = 5 July 1962 | area_km2 = 2381741 | area_rank = 10th | area_sq_mi = 919595 | percent_water = 1.1 | population_estimate = 44,700,000 | population_estimate_year = 2021 | population_estimate_rank = 32nd | population_census_year = | population_density_km2 = 17.7 | population_density_sq_mi = 47 | population_density_rank = 168 | GDP_PPP = $684.649 billion | GDP_PPP_year = 2019 | GDP_PPP_rank = 35th | GDP_PPP_per_capita = $15,765 | GDP_PPP_per_capita_rank = 82nd | GDP_nominal = $183.687 billion | GDP_nominal_year = 2019 | GDP_nominal_rank = 53rd | GDP_nominal_per_capita = $4,229 | GDP_nominal_per_capita_rank = 109th | Gini = 27.6 | Gini_year = 2011 | Gini_ref = | HDI = 0.748 | HDI_year = 2019 | HDI_change = decrease | HDI_ref = | HDI_rank = 91st | currency = Algerian dinar | currency_code = DZD | time_zone = CET | utc_offset = +1 | date_format = dd/mm/yyyy | drives_on = right | calling_code = +213 | cctld = .dz
الجزائر. | today = Algeria ( ; ar|الجزائر|al-Jazāʾir), officially the People's Democratic Republic of Algeria, is a country in the Maghreb region of North Africa. The capital and most populous city is Algiers, located in the far north of the country on the Mediterranean coast. With an area of , Algeria is the tenth-largest country in the world, and the largest by area in the African Union and the Arab world. With an estimated population of over 44 million, it is the ninth-most populous country in Africa. Algeria is bordered to the northeast by Tunisia, to the east by Libya, to the southeast by Niger, to the southwest by Mali, Mauritania, and the Western Saharan territory, to the west by Morocco, and to the north by the Mediterranean Sea. The country has a semi-arid geography, with most of the population living in the fertile north and the Sahara dominating the geography of the south. This arid geography makes the country very vulnerable to climate change. Pre-1962 Algeria has known many empires and dynasties, including ancient Numidians, Phoenicians, Carthaginians, Romans, Vandals, Byzantines, Umayyads, Abbasids, Rustamid, Idrisid, Aghlabids, Fatimids, Zirid, Hammadids, Almoravids, Almohads, Zayyanids, Spaniards, Ottomans and finally, the French colonial empire. Most of the population is Arab-Berber, practicing Islam and using the official languages of Arabic and Berber. However, French serves as an administrative and education language in some contexts, and Algerian Arabic is the main spoken language. Algeria has a semi-presidential republic, with local constituencies consisting of 58 provinces and 1,541 communes. Algeria is a regional and middle power. It has the highest Human Development Index of all non-island African countries and one of the largest economies on the continent, based largely on energy exports. Algeria has the 16th largest oil reserves in the world and the second largest in Africa, while it has the ninth largest reserves of natural gas. Sonatrach, the national oil company, is the largest company in Africa, supplying large amounts of natural gas to Europe. Algeria has one of the largest militaries in Africa and the largest defence budget. It is a member of the African Union, the Arab League, OPEC, the United Nations, and the Arab Maghreb Union, of which it is a founding member.

The country's name derives from the city of Algiers which in turn derives from the Arabic (, "The Islands"), a truncated form of the older (, "Islands of the Mazghanna Tribe"), employed by medieval geographers such as al-Idrisi.

In the region of Ain Hanech (Saïda Province), early remnants (200,000 BC) of hominid occupation in North Africa were found. Neanderthal tool makers produced hand axes in the Levalloisian and Mousterian styles (43,000 BC) similar to those in the Levant. Algeria was the site of the highest state of development of Middle Paleolithic Flake tool techniques. Tools of this era, starting about 30,000 BC, are called Aterian (after the archaeological site of Bir el Ater, south of Tebessa). The earliest blade industries in North Africa are called Iberomaurusian (located mainly in the Oran region). This industry appears to have spread throughout the coastal regions of the Maghreb between 15,000 and 10,000 BC. Neolithic civilization (animal domestication and agriculture) developed in the Saharan and Mediterranean Maghreb perhaps as early as 11,000 BC or as late as between 6000 and 2000 BC. This life, richly depicted in the Tassili n'Ajjer paintings, predominated in Algeria until the classical period. The mixture of peoples of North Africa coalesced eventually into a distinct native population that came to be called Berbers, who are the indigenous peoples of northern Africa. 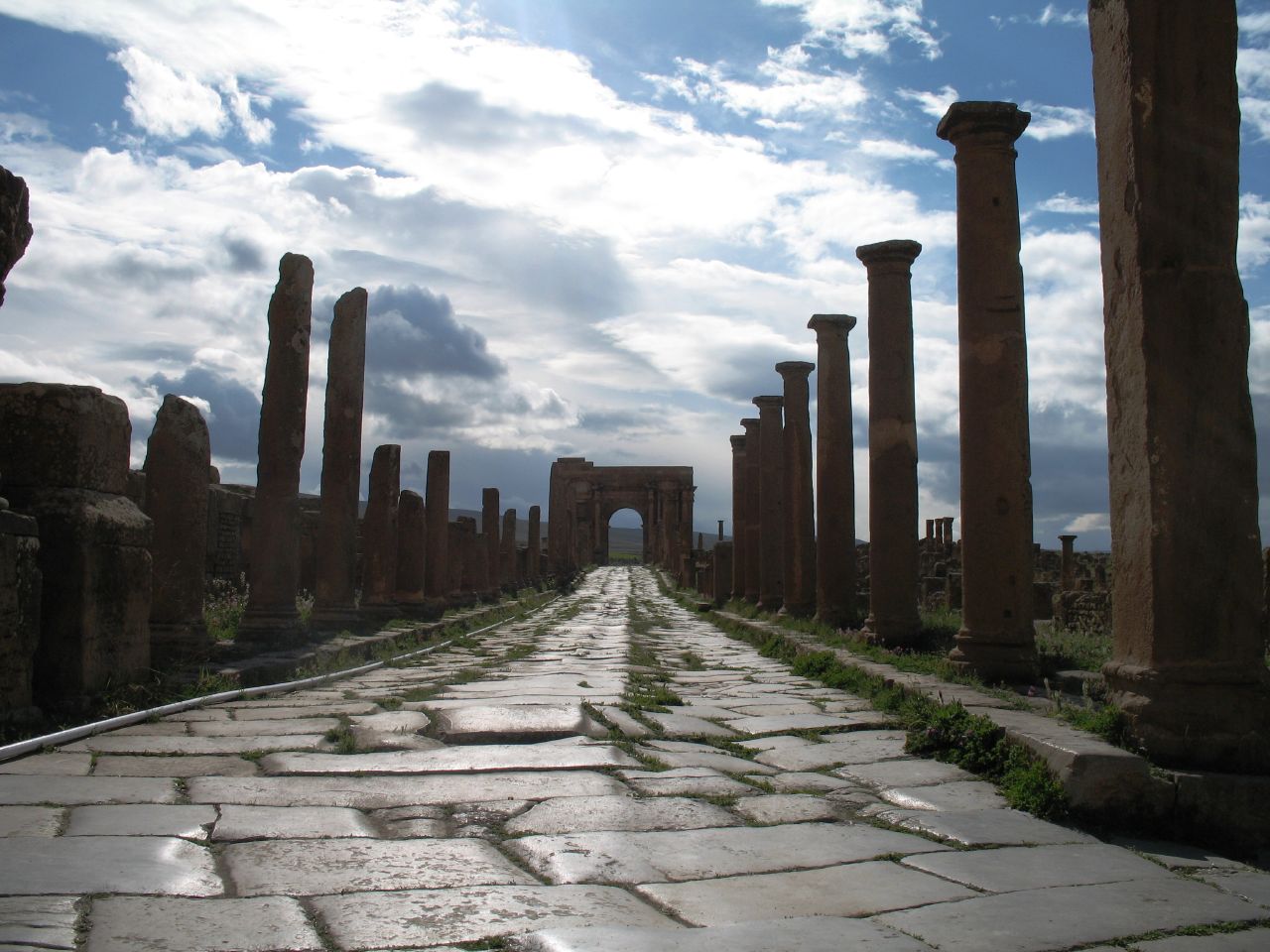 From their principal center of power at Carthage, the Carthaginians expanded and established small settlements along the North African coast; by 600 BC, a Phoenician presence existed at Tipasa, east of Cherchell, Hippo Regius (modern Annaba) and Rusicade (modern Skikda). These settlements served as market towns as well as anchorages. As Carthaginian power grew, its impact on the indigenous population increased dramatically. Berber civilisation was already at a stage in which agriculture, manufacturing, trade, and political organisation supported several states. Trade links between Carthage and the Berbers in the interior grew, but territorial expansion also resulted in the enslavement or military recruitment of some Berbers and in the extraction of tribute from others.

By the early 4th century BC, Berbers formed the single largest element of the Carthaginian army. In the Revolt of the Mercenaries, Berber soldiers rebelled from 241 to 238 BC after being unpaid following the defeat of Carthage in the First Punic War. They succeeded in obtaining control of much of Carthage's North African territory, and they minted coins bearing the name Libyan, used in Greek to describe natives of North Africa. The Carthaginian state declined because of successive defeats by the Romans in the Punic Wars. In 146 BC the city of Carthage was destroyed. As Carthaginian power waned, the influence of Berber leaders in the hinterland grew. By the 2nd century BC, several large but loosely administered Berber kingdoms had emerged. Two of them were established in Numidia, behind the coastal areas controlled by Carthage. West of Numidia lay Mauretania, which extended across the Moulouya River in modern-day Morocco to the Atlantic Ocean. The high point of Berber civilisation, unequalled until the coming of the Almohads and Almoravids more than a millennium later, was reached during the reign of Masinissa in the 2nd century BC. 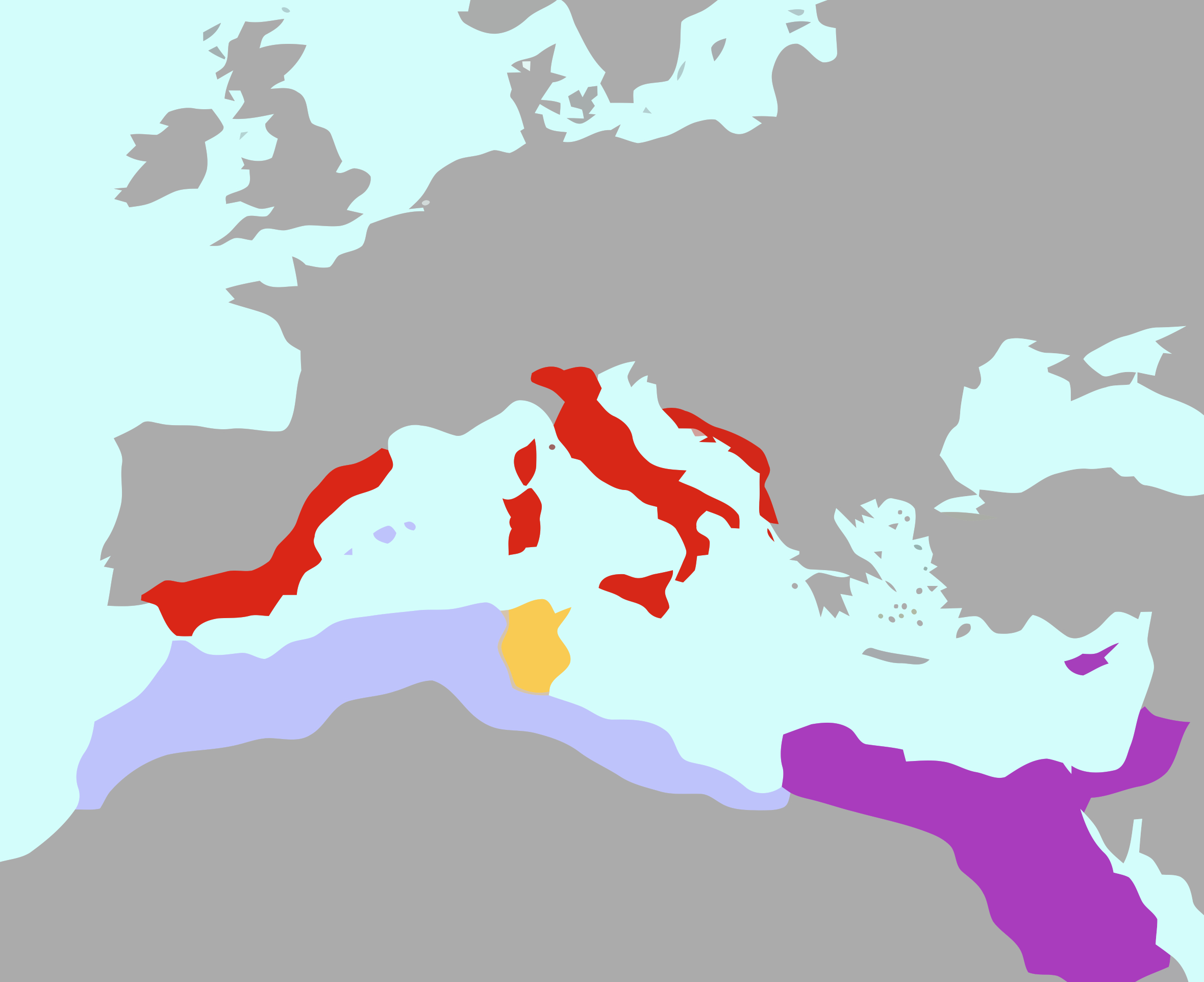 After Masinissa's death in 148 BC, the Berber kingdoms were divided and reunited several times. Masinissa's line survived until 24 AD, when the remaining Berber territory was annexed to the Roman Empire. For several centuries Algeria was ruled by the Romans, who founded many colonies in the region. Like the rest of North Africa, Algeria was one of the breadbaskets of the empire, exporting cereals and other agricultural products. Saint Augustine was the bishop of Hippo Regius (modern-day Annaba, Algeria), located in the Roman province of Africa. The Germanic Vandals of Geiseric moved into North Africa in 429, and by 435 controlled coastal Numidia. They did not make any significant settlement on the land, as they were harassed by local tribes. In fact, by the time the Byzantines arrived Leptis Magna was abandoned and the Msellata region was occupied by the indigenous Laguatan who had been busy facilitating an Amazigh political, military and cultural revival. Furthermore, during the rule of the Romans, Byzantines, Vandals and Carthaginians the Kabyle people were the only or one of the few in North Africa who remained independent. The Kabyle people were incredibly resistible so much so that even during the Arab conquest of North Africa they still had control and possession over their mountains.

After negligible resistance from the locals, Muslim Arabs of the Umayyad Caliphate conquered Algeria in the early 8th century. 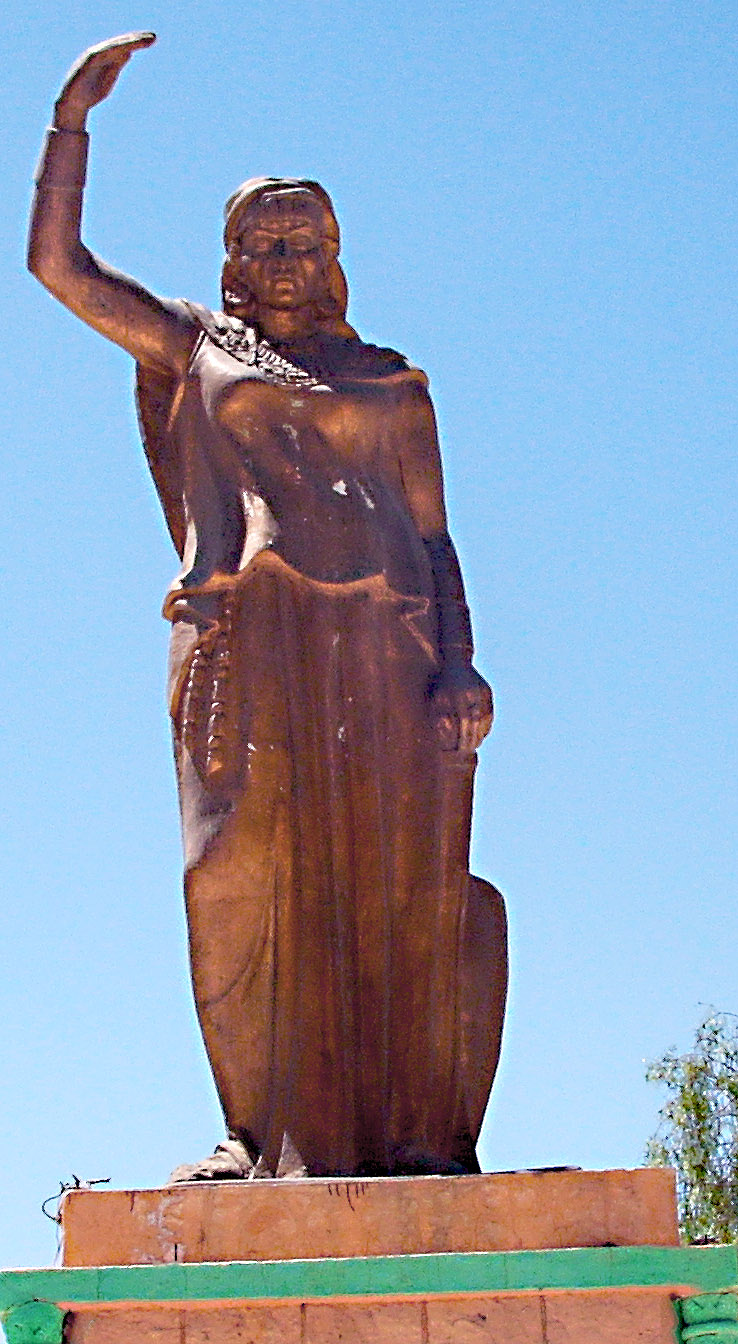 Large numbers of the indigenous Berber people converted to Islam. Christians, Berber and Latin speakers remained in the great majority in Tunisia until the end of the 9th century and Muslims only became a vast majority some time in the 10th. After the fall of the Umayyad Caliphate, numerous local dynasties emerged, including the Rustamids, Aghlabids, Fatimids, Zirids, Hammadids, Almoravids, Almohads and the Abdalwadid. The Christians left in three waves: after the initial conquest, in the 10th century and the 11th. The last were evacuated to Sicily by the Normans and the few remaining died out in the 14th century.