The Vietnamese alphabet ( vi|Chữ Quốc Ngữ, "script of the national language") is the modern Latin writing script or writing system for the Vietnamese language. It uses the Latin script based on Romance languages developed by Portuguese missionaries. The Vietnamese alphabet contains 29 letters, including one digraph (''đ'') and nine with diacritics, five of which are used to designate a tone (''a'', ''à'', ''á'', ''ả'', ''ã'', and ''ạ'') and the other four used for other letters of the alphabet (''ă, â/ê/ô, ơ, ư'' ). The large number of letters with diacritics, which can stack up to twice on the same letter, e.g. "nhất" meaning "first", its origins being the Sino-Vietnamese interpretation of the Chinese character 一 (Yī) meaning "one", makes it recognizable amongst Latin scripts. __TOC__

There are six tones, each with a separate diacritic, which are marked in the IPA as suprasegmentals following the phonemic value. It uses all 22 letters of the ISO basic Latin alphabet plus 6 additional "letters" where 4 letters are with the other 3 diacritics: Ă/ă, Â/â, Ê/ê, Ô/ô, Ơ/ơ, Ư/ư and the letter Đ/đ except for F/f, J/j, W/w and Z/z. The aforementioned 4 letters are only used to write loanwords, languages of other ethnic groups in the country based on Vietnamese phonetics to differentiate the meanings or even Vietnamese dialects, for example: dz or z for Northern Vietnamese pronunciation of "gi" in standard Vietnamese, or to distinguish the from the Vietnamese D (pronounced y/j or dz/z) and from Đ (pronounced D like in English). ''Notes'': * ''Pronouncing b as'' and ''p'' as is to avoid confusion in some contexts, the same for ''s'' and ''x'' , ''i'' and ''y'' . * ''Q'', ''q'' is always followed by ''u'' in every word and phrase in Vietnamese, e.g. (trousers), (to attract), etc. * The name for ''y'' is from the French name for the letter: (Greek I), referring to the letter's origin from the Greek letter ''upsilon''. The other obsolete French pronunciations include ''e'' /ə:˧/ and ''u'' /wi˧/.

The alphabet is largely derived from Portugese with major influence from French, although the usage of ''gh'' and ''gi'' was borrowed from Italian (compare , ) and that for ''c/k/qu'' from Greek and Latin (compare , , ), mirroring the English usage of these letters (compare , , ).

The correspondence between the orthography and pronunciation is somewhat complicated. In some cases, the same letter may represent several different sounds, and different letters may represent the same sound. This is because the orthography was designed centuries ago and the spoken language has changed, as shown in the chart directly above that contrasts the difference between Middle and Modern Vietnamese. The letters ''y'' and ''i'' are mostly equivalent, and there is no concrete rule that says when to use one or the other, except in sequences like ''ay'' and ''uy'' (i.e. tay ("arm, hand") is read while tai ("ear") is read ). There have been attempts since the late 20th century to standardize the orthography by replacing all the vowel uses of ''y'' with ''i'', the latest being a decision from the Vietnamese Ministry of Education in 1984. These efforts seem to have had limited effect. In textbooks published by Nhà Xuất bản Giáo dục ("Publishing House of Education"), ''y'' is used to represent only in Sino-Vietnamese words that are written with one letter ''y'' alone (diacritics can still be added, as in ''ý'', ''ỷ''), at the beginning of a syllable when followed by ''ê'' (as in ''yếm'', ''yết''), after ''u'' and in the sequence ''ay''; therefore such forms as ''*lý'' and ''*kỹ'' are not "standard", though they are much preferred elsewhere. Most people and the popular media continue to use the spelling that they are most accustomed to. The uses of the letters ''i'' and ''y'' to represent the phoneme can be categorized as "standard" (as used in textbooks published by Nhà Xuất bản Giáo dục) and "non-standard" as follows. This "standard" set by Nhà Xuất bản Giáo dục is not definite. It is unknown why the literature books use ''Lí'' while the history books use ''Lý''.

Vietnamese is a tonal language, i.e. the meaning of each word depends on the pitch (basically a specific tone and glottalization pattern) in which it is pronounced. There are six distinct tones in the standard northern dialect. In the south, there is a merging of the hỏi and ngã tones, in effect leaving five basic tones. The first one ("level tone") is not marked and the other five are indicated by diacritics applied to the vowel part of the syllable. The tone names are chosen such that the name of each tone is spoken in the tone it identifies. *Unmarked vowels are pronounced with a level voice, in the middle of the speaking range. *The grave accent indicates that the speaker should start somewhat low and drop slightly in tone, with the voice becoming increasingly breathy. *The hook indicates in Northern Vietnamese that the speaker should start in the middle range and fall, but in Southern Vietnamese that the speaker should start somewhat low and fall, then rise (as when asking a question in English). *In the North, a tilde indicates that the speaker should start mid, break off (with a glottal stop), then start again and rise like a question in tone. In the South, it is realized identically to the Hỏi tone. *The acute accent indicates that the speaker should start mid and rise sharply in tone. *The dot signifies in Northern Vietnamese that the speaker starts low and fall lower in tone, with the voice becoming increasingly creaky and ending in a glottal stop In syllables where the vowel part consists of more than one vowel (such as diphthongs and triphthongs), the placement of the tone is still a matter of debate. Generally, there are two methodologies, an "old style" and a "new style". While the "old style" emphasizes aesthetics by placing the tone mark as close as possible to the center of the word (by placing the tone mark on the last vowel if an ending consonant part exists and on the next-to-last vowel if the ending consonant doesn't exist, as in ''hóa'', ''hủy''), the "new style" emphasizes linguistic principles and tries to apply the tone mark on the main vowel (as in ''hoá'', ''huỷ''). In both styles, when one vowel already has a quality diacritic on it, the tone mark must be applied to it as well, regardless of where it appears in the syllable (thus '' thuế'' is acceptable while ''thúê'' is not). In the case of the ''ươ'' diphthong, the mark is placed on the ''ơ''. The ''u'' in ''qu'' is considered part of the consonant. Currently, the new style is usually used in textbooks published by Nhà Xuất bản Giáo dục, while most people still prefer the old style in casual uses. Among Overseas Vietnamese communities, the old style is predominant for all purposes. In lexical ordering, differences in letters are treated as primary, differences in tone markings as secondary and differences in case as tertiary differences. (Letters include for instance A and Ă but not Ẳ. Older dictionaries also treated digraphs and trigraphs like CH and NGH as base letters.) Ordering according to primary and secondary differences proceeds syllable by syllable. According to this principle, a dictionary lists ''tuân thủ'' before ''tuần chay'' because the secondary difference in the first syllable takes precedence over the primary difference in the second syllable.

In the past, syllables in multisyllabic words were concatenated with hyphens, but this practice has died out and hyphenation is now reserved for word-borrowings from other languages. A written syllable consists of at most three parts, in the following order from left to right: #An optional beginning consonant part #A required vowel syllable nucleus and the tone mark, if needed, applied above or below it #An ending consonant part, can only be one of the following: ''c'', ''ch'', ''m'', ''n'', ''ng'', ''nh'', ''p'', ''t'', or nothing. 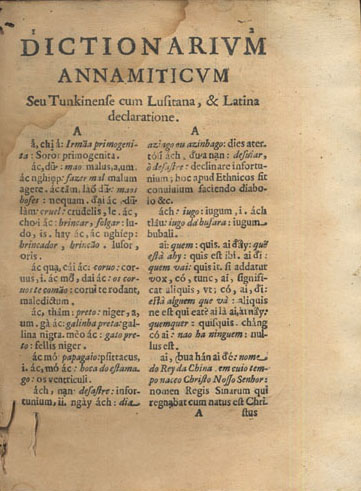 Since the beginning of Chinese rules in the 111 BC, literature, government papers, scholarly works and religious scripture were all written in classical Chinese (''chữ Hán'') while indigenous writing in chu han started around 9th century. Since the 12th century, several Vietnamese words started to be written in ', using variant Chinese characters, each of them representing one word. The system was based on chữ Hán, but was also supplemented with Vietnamese-invented characters (', proper Nôm characters) to represent native Vietnamese words.

As early as 1620 with the work of Francisco de Pina, Portuguese and Italian Jesuit missionaries in Vietnam began using Latin script to transcribe the Vietnamese language as an assistance for learning the language. The work was continued by the Avignonese Alexandre de Rhodes. Building on previous dictionaries by Gaspar do Amaral and Antonio Barbosa, Rhodes compiled the ''Dictionarium Annamiticum Lusitanum et Latinum'', a Vietnamese–Portuguese–Latin dictionary, which was later printed in Rome in 1651, using their spelling system. These efforts led eventually to the development of the present Vietnamese alphabet. For 200 years, chữ Quốc ngữ was used within the Catholic community.

In 1910, French colonial administration enforced chữ Quốc ngữ. The Latin alphabet then became a means to publish Vietnamese popular literature, which were disparaged as vulgar by the Chinese-educated imperial elites. Historian Pamela A. Pears asserted that by instituting the Latin alphabet in Vietnam, the French cut the Vietnamese from their traditional Hán Nôm literature. Nowadays, although the Vietnamese majorly use chữ Quốc ngữ since the 1920s, and new Vietnamese terms for new items or words are often calqued from Hán Nôm. Some French had originally planned to replace Vietnamese with French, but this never was a serious project, given the small number of French settlers compared with the native population. The French had to reluctantly accept the use of chữ Quốc ngữ to write Vietnamese since this writing system, created by Portuguese missionaries, is based on Portuguese orthography, not French.

Between 1907 and 1908 the short-lived Tonkin Free School promulgated chữ quốc ngữ and taught French language to the general population. In 1917, the French system suppressed Vietnam's Confucian examination system, viewed as an aristocratic system linked with the "ancient regime", thereby forcing Vietnamese elites to educate their offspring in the French language education system. Emperor Khải Định declared the traditional writing system abolished in 1918. While traditional nationalists favoured the Confucian examination system and the use of chữ Hán, Vietnamese revolutionaries, progressive nationalists as well as pro-French elites viewed the French education system as a means to "liberate" the Vietnamese from old Chinese domination and the unsatisfactory "outdated" Confucian examination system, to "democratize" education and to help link Vietnamese to European philosophies. The French colonial system then set up another educational system, teaching Vietnamese as first language using chữ quốc ngữ in primary school and then French language (taught in chữ quốc ngữ). Hundreds of thosands of textbooks for primary education began to be published in chữ quốc ngữ, with the unintentional result of turning the script into the popular medium for the expression of Vietnamese culture.

Prior to 21st-century computer-assistance, the act of typesetting and printing Vietnamese has been described as a nightmare due to the number of accents/diacritics.