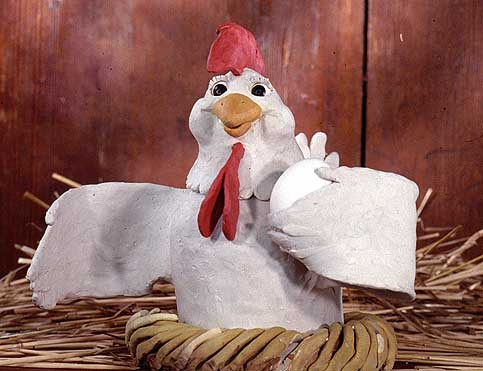 Stop motion is an animated filmmaking technique in which objects are physically manipulated in small increments between individually photographed frames so that they will appear to exhibit independent motion or change when the series of frames is played back. Any kind of object can thus be animated, but puppets with movable joints (puppet animation) or plasticine figures (clay animation or claymation) are most commonly used. Puppets, models or clay figures built around an armature are used in model animation. Stop motion with live actors is often referred to as pixilation. Stop motion of flat materials such as paper, fabrics or photographs is usually called cutout animation.

The term "stop motion," relating to the animation technique, is often spelled with a hyphen as "stop-motion." Both orthographical variants, with and without the hyphen, are correct, but the hyphenated one has a second meaning that is unrelated to animation or cinema: "a device for automatically stopping a machine or engine when something has gone wrong" (''The New Shorter Oxford English Dictionary'', 1993 edition). Stop motion should not be confused with the time-lapse technique in which still photographs of a live scene are taken at regular intervals and then combined to make a continuous film in which time appears to be moving faster.

Before the advent of chronophotography in 1878, a small number of picture sequences were photographed with subjects in separate poses. These can now be regarded as a form of stop motion or pixilation, but very few results were meant to be animated. In 1849, Joseph Plateau published a note about improvements for his Fantascope (a.k.a. phénakisticope). A new translucent variation had improved picture quality and could be viewed with both eyes, by several people at the same time. Plateau stated that the illusion could be advanced even further with an idea communicated to him by Charles Wheatstone: a combination of the fantascope and Wheatstone's stereoscope. Plateau thought the construction of a sequential set of stereoscopic image pairs would be the more difficult part of the plan than adapting two copies of his improved fantascope to be fitted with a stereoscope. Wheatstone had suggested using photographs on paper of a solid object, for instance a statuette. Plateau concluded that for this purpose 16 plaster models could be made with 16 regular modifications. He believed such a project would take much time and careful effort, but would be well worth it because of the expected marvelous results. Unfortunately, the plan was never executed, possibly because Plateau was almost completely blind by this time. In 1852 Jules Duboscq patented a "Stéréoscope-fantascope ou Bïoscope" (or abbreviated as stéréofantascope) stroboscopic disc. The only known extant disc contains stereoscopic photograph pairs of different phases of the motion of a machine. Due to the long exposure times necessary to capture an image with the photographic emulsions of the period, the sequence could not be recorded live and must have been assembled from separate photographs of the various positions of the machinery. In 1855, Johann Nepomuk Czermak's published an article about his Stereophoroskop and other experiments aimed at stereoscopic moving images. He mentioned a method of sticking needles in a stroboscopic disc so that it looked like one needle was being pushed in and out of the cardboard when animated. He realized that this method provided basically endless possibilities to make different 3D animations. He then introduced two methods to animate stereoscopic pairs of images, one was basically a stereo viewer using two stroboscopic discs and the other was more or less similar to the later zoetrope. Czermak explained how suitable stereoscopic photographs could be made by recording a series of models, for instance to animate a growing pyramid. On 27 February 1860 Peter Hubert Desvignes received British patent no. 537 for 28 monocular and stereoscopic variations of cylindrical stroboscopic devices (much like the later zoetrope). Desvignes' ''Mimoscope'', received an Honourable Mention "for ingenuity of construction" at the 1862 International Exhibition in London. Desvignes "employed models, insects and other objects, instead of pictures, with perfect success." In 1874 Jules Janssen made several practice discs for the recording of the passage of Venus with his photographic rifle. He used a model of the planet and a light source standing in for the sun. While actual recordings of the passage of Venus have not been located, some practice discs survived and the images of one were turned into a short animated film decades after the development of cinematography. In 1887, Étienne-Jules Marey created a large zoetrope with a series of plaster models based on his chronophotographs of birds in flight.

It is estimated that 80 to 90 percent of all silent films are lost. Extant contemporary movie catalogs, reviews and other documentation can provide some details on lost films, but this kind of written documentation is also incomplete and often insufficient to properly date all extant films or even identify them if original titles are missing. Possible stop motion in lost films is even harder to trace. The principles of animation and other special effects were mostly kept a secret, not only to prevent use of such techniques by competitors, but also to keep audiences interested in the mystery of the magic tricks. Stop motion is closely related to the stop trick, in which the camera is temporarily stopped during the recording of a scene to create a change before filming is continued (or for which the cause of the change is edited out of the film). In the resulting film the change will be sudden and a logical cause of the change will be mysteriously absent or replaced with a fake cause that is suggested in the scene. The oldest known example is used for the beheading in Edison Manufacturing Company's 1895 film ''The Execution of Mary Stuart''. The technique of stop motion can be interpreted as repeatedly applying the stop trick. In 1917 clay animation pioneer Helena Smith-Dayton referred to the principle behind her work as "stop action", a synonym of "stop motion". French trick film pioneer Georges Méliès claimed to have invented the stop-trick and popularized it by using it in many of his short films. He reportedly used stop-motion animation in 1899 to produce moving letterforms.

Spanish filmmaker Segundo de Chomón (1871–1929) made many trick films in France for Pathé. He has often been compared to Georges Méliès as he also made many fantasy films with stop tricks and other illusions (helped by his wife, Julienne Mathieu). By 1906 Chomón was using stop motion animation. ''Le théâtre de Bob'' (April 1906) features over three minutes of stop motion animation with dolls and objects to represent a fictional automated theatre owned by Bob, played by a live-action child actor. It is the oldest extant film with proper stop motion and a definite release date. Segundo de Chomón's ''Sculpteur moderne'' was released on 31 January 1908 and features heaps of clay molding itself into detailed sculptures that are capable of minor movements. The final sculpture depicts an old woman and walks around before it's picked up, squashed and molded back into a sitting old lady.

American film pioneer Edwin S. Porter filmed a single-shot "lightning sculpting" film with a baker molding faces from a patch of dough in ''Fun in a Bakery Shop'' (1902), considered as foreshadowing of clay animation. In 1905, Porter showed animated letters and very simple cutout animation of two hands in the intertitles in ''How Jones lost his roll''. Porter experimented with a small bit of crude stop-motion animation in his trick film ''Dream of a Rarebit Fiend'' (1906). ''The "Teddy" Bears'' (2 March 1907), made in collaboration with Wallace McCutcheon Sr., mainly shows people in bear costumes, but the short film also features a short stop-motion segment with small teddy bears. On 15 February 1908, Porter released the trick film ''A Sculptor's Welsh Rabbit Dream'' that featured clay molding itself into three complete busts. No copy of the film has yet been located. It was soon followed by the similar extant film ''The Sculptor's Nightmare'' (6 May 1908) by Wallace McCutcheon Sr.

J. Stuart Blackton's ''The Haunted Hotel'' (23 February 1907) featured a combination of live-action with practical special effects and stop motion animation of several objects, a puppet and a model of the haunted hotel. It was the first stop motion film to receive wide scale appreciation. Especially a large close-up view of a table being set by itself baffled viewers; there were no visible wires or other noticeable well-known tricks. This inspired other filmmakers, including French animator Émile Cohl and Segundo de Chomón. De Chomón would release the similar ''The House of Ghosts'' and ''El hotel eléctrico'' in 1908, with the latter also containing some very early pixilation. ''The Humpty Dumpty Circus'' (1908, considered lost) by Blackton and his British-American Vitagraph partner Albert E. Smith showed an animated performance of the figures from a popular wooden toy set. Smith would later claim that this was "the first stop-motion picture in America". The inspiration would have come from seeing how puffs of smoke behaved in the interrupted recordings for a stop trick film they were making. Smith would have suggested to get a patent for the technique, but Blackton thought it wasn't that important. Smith's recollections are not considered to be very reliable.

Blackton's ''The Haunted Hotel'' made a big impression in Paris, where it was released as ''L'hôtel hanté: fantasmagorie épouvantable''. When Gaumont bought a copy to further distribute the film, it was carefully studied by some of their filmmakers to find out how it was made. Reportedly it was newcomer Émile Cohl who unraveled the mystery. Not long after, Cohl released his first film, ''Japon de fantaisie'' (June 1907), featuring his own imaginative use of the stop-motion technique. It was followed by the revolutionary hand-drawn ''Fantasmagorie'' (17 August 1908) and many more animated films by Cohl. Other notable stop-motion films by Cohl include ''Les allumettes animées (Animated Matches)'' (1908), and ''Mobilier fidèle'' (1910, in collaboration with Romeo Bosetti). ''Mobilier fidèle'' is often confused with Bosetti's object animation tour de force ''Le garde-meubles automatique (The Automatic Moving Company)'' (1912). Both films feature furniture moving by itself.

Of the more than 300 short films produced between 1896 and 1915 by British film pioneer Arthur Melbourne-Cooper, an estimated 36 contained forms of animation. Based on later reports by Melbourne-Cooper and by his daughter Audrey Wadowska, some believe that Cooper's ''Matches: an Appeal'' was produced in 1899 and therefore the very first stop-motion animation. The extant black-and-white film shows a matchstick figure writing an appeal to donate a Guinea for which Bryant and May would supply soldiers with sufficient matches. No archival records are known that could proof that the film was indeed created in 1899 during the beginning of the Second Boer War. Others place it at 1914, during the beginning of World War I. Cooper created more ''Animated Matches'' scenes in the same setting. These are believed to also have been produced in 1899, while a release date of 1908 has also been given. The 1908 ''Animated Matches'' film by Émile Cohl may have caused more confusion about the release dates of Cooper's matchstick animations. It also raises the question whether Cohl may have been inspired by Melbourne-Cooper or vice versa. Melbourne-Cooper's lost films ''Dolly's Toys'' (1901) and ''The Enchanted Toymaker'' (1904) may have included stop-motion animation.