Ljubljana ( , ; , locally also ; also known by other historical names) is the capital and largest city of Slovenia. It has been the cultural, educational, economic, political and administrative centre. During antiquity, a Roman city called Emona stood in the area. Ljubljana itself was first mentioned in the first half of the 12th century. Situated at the middle of a trade route between the northern Adriatic Sea and the Danube region, it was the historical capital of Carniola, one of the Slovene-inhabited parts of the Habsburg Monarchy. It was under Habsburg rule from the Middle Ages until the dissolution of the Austro-Hungarian Empire in 1918. After World War II, Ljubljana became the capital of the Socialist Republic of Slovenia, part of the Socialist Federal Republic of Yugoslavia. It retained this status until Slovenia became independent in 1991 and Ljubljana became the capital of the newly formed state.

The origin of the name of the city, Ljubljana, is unclear. In the Middle Ages, both the river and the town were also known by the German name Laibach. This name was in official use as an endonym until 1918, and it remains frequent as a German exonym, both in common speech and official use. The city is alternatively named Lublana in many English language documents. The city is called ''Lubiana'' in Italian, in la|Labacum and anciently ''Aemona''. For most scholars, the problem has been in how to connect the Slovene and the German names. The origin from the Slavic ''ljub''- "to love, like" was in 2007 supported as the most probable by the linguist Tijmen Pronk, a specialist in comparative Indo-European linguistics and Slovene dialectology, from the University of Leiden. He supported the thesis that the name of the river derived from the name of the settlement. The linguist Silvo Torkar, who specialises in Slovene personal and place names, argued for the thesis that the name ''Ljubljana'' derives from ''Ljubija'', the original name of the Ljubljanica River flowing through it, itself derived from the Old Slavic male name ''Ljubovid'', "the one of a lovely appearance". The name ''Laibach'', he claimed, was actually a hybrid of German and Slovene and derived from the same personal name. The symbol of the city is the Ljubljana Dragon. It is depicted on the top of the tower of Ljubljana Castle in the Ljubljana coat of arms and on the Ljubljanica-crossing Dragon Bridge (). It symbolises power, courage, and greatness. There are several explanations on the origin of the Ljubljana Dragon. According to a Slavic myth, the slaying of a dragon releases the waters and ensures the fertility of the earth, and it is thought that the myth is tied to the Ljubljana Marshes, the expansive marshy area that periodically threatens Ljubljana with flooding. According to the celebrated Greek legend, the Argonauts on their return home after having taken the Golden Fleece found a large lake surrounded by a marsh between the present-day towns of Vrhnika and Ljubljana. It was there that Jason struck down a monster. This monster has evolved into the dragon that today is present in the city coat of arms and flag. It is historically more believable that the dragon was adopted from Saint George, the patron of the Ljubljana Castle chapel built in the 15th century. In the legend of Saint George, the dragon represents the old ancestral paganism overcome by Christianity. According to another explanation, related to the second, the dragon was at first only a decoration above the city coat of arms. In the Baroque, it became part of the coat of arms, and in the 19th and especially the 20th century, it outstripped the tower and other elements in importance.

Around 2000 BC, the Ljubljana Marshes in the immediate vicinity of Ljubljana were settled by people living in pile dwellings. Prehistoric pile dwellings and the oldest wooden wheel in the world are among the most notable archeological findings from the marshland. These lake-dwelling people lived through hunting, fishing and primitive agriculture. To get around the marshes, they used dugout canoes made by cutting out the inside of tree trunks. Their archaeological remains, nowadays in the Municipality of Ig, have been designated a UNESCO World Heritage Site since June 2011, in the common nomination of six Alpine states. Later, the area remained a transit point for numerous tribes and peoples, among them the Illyrians, followed by a mixed nation of the Celts and the Illyrians called the Iapydes, and then in the 3rd century BC a Celtic tribe, the Taurisci. 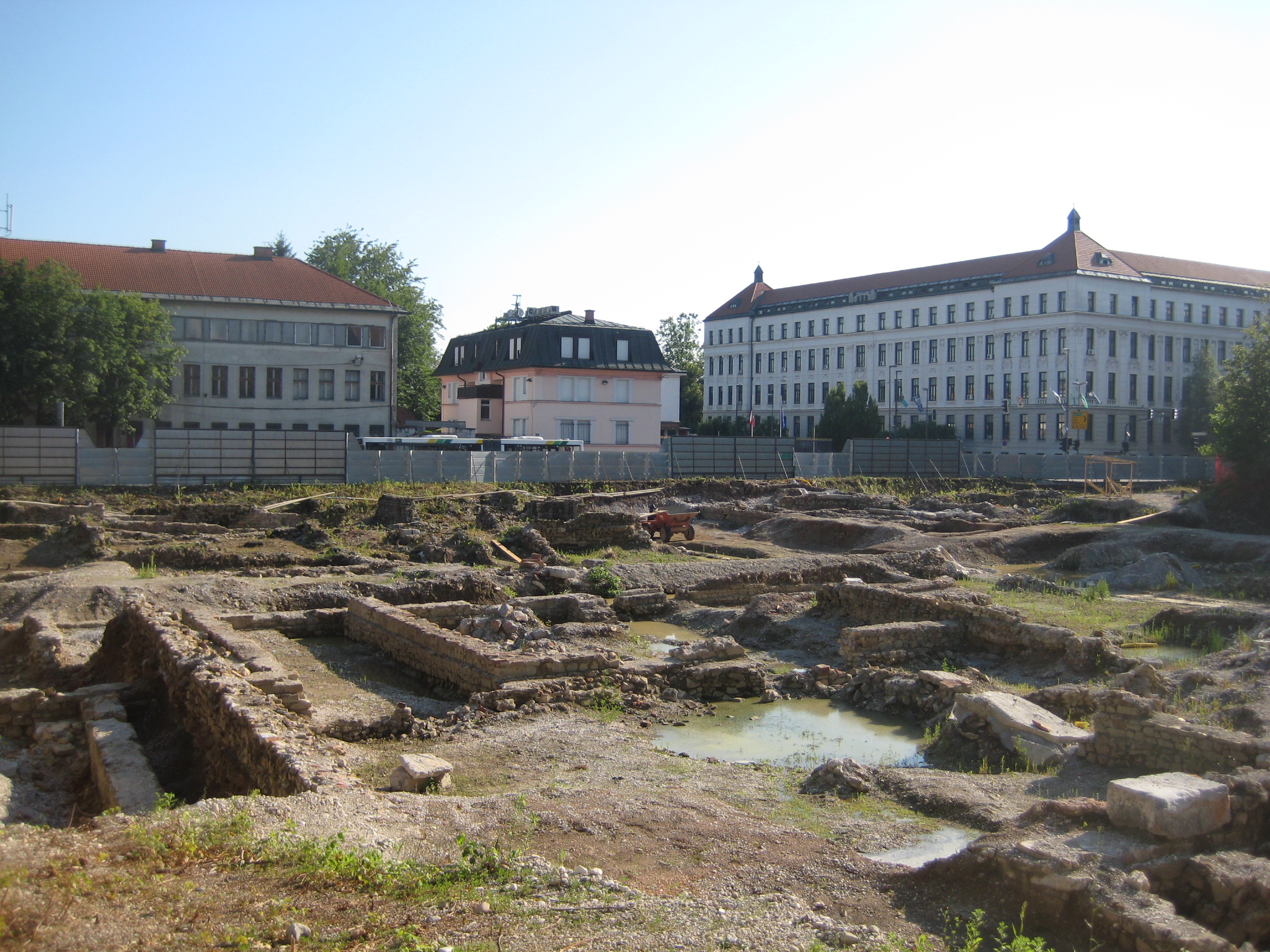 Around 50 BC, the Romans built a military encampment that later became a permanent settlement called Iulia Aemona. This entrenched fort was occupied by the ''Legio XV Apollinaris''.