Lithuanian ( lt|lietuvių kalba|links=no) is a Baltic language. It is the official language of Lithuania and one of the official languages of the European Union. There are about 2.8 million native Lithuanian speakers in Lithuania and about 200,000 speakers elsewhere. Lithuanian is closely related to the neighbouring Latvian language. It is written in a Latin script. It is said to be the most conservative of the existing Indo-European languages, retaining features of the Proto-Indo-European language now lost in other languages. 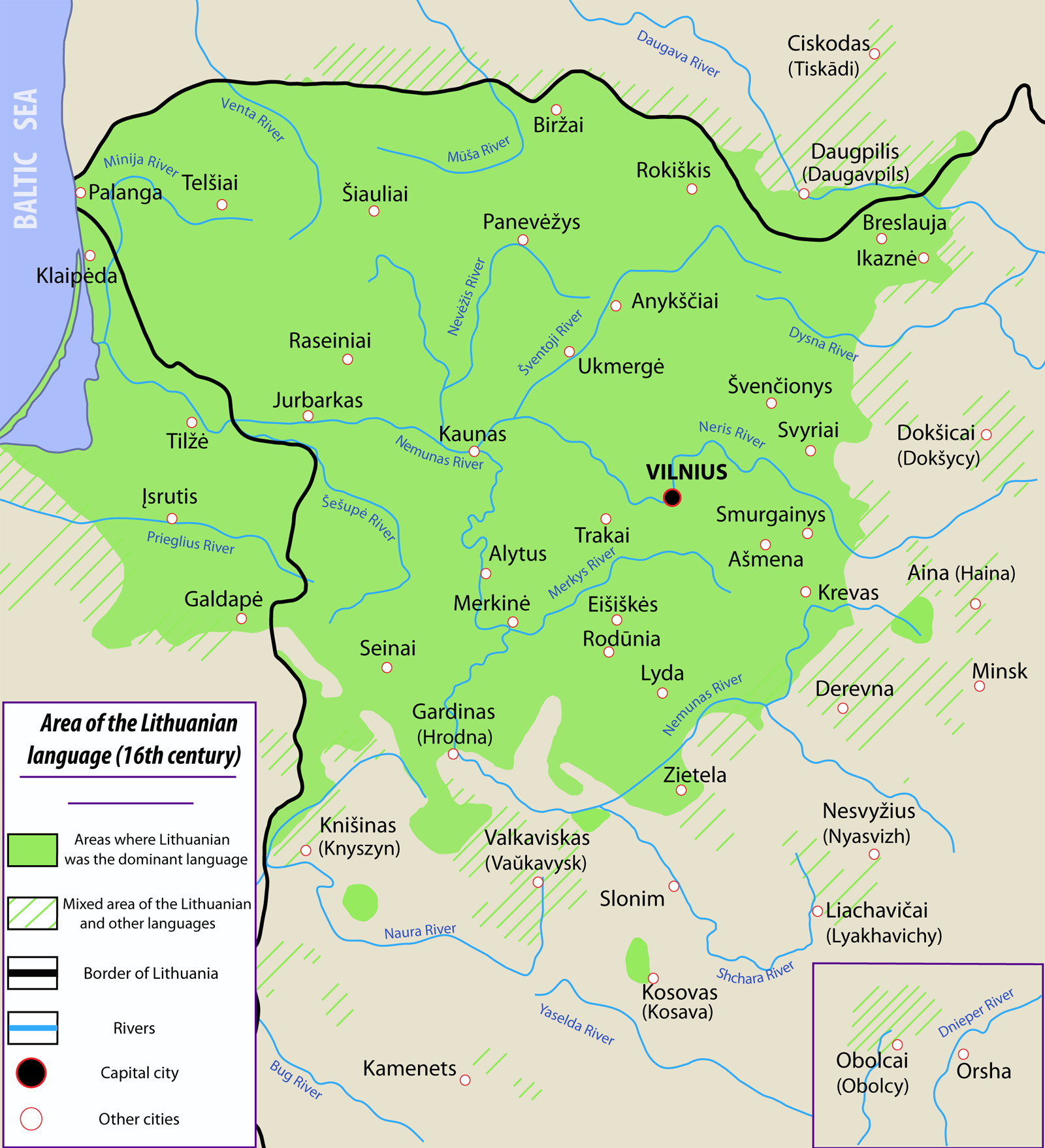 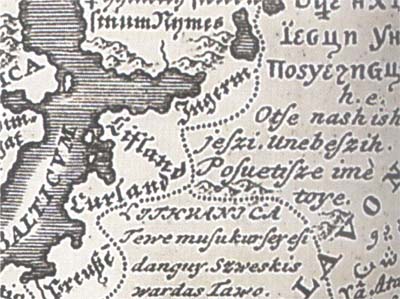 Among Indo-European languages, Lithuanian is conservative in some aspects of its grammar and phonology, retaining archaic features otherwise found only in ancient languages such as Sanskrit (particularly its early form, Vedic Sanskrit) or Ancient Greek. For this reason, it is an important source for the reconstruction of the Proto-Indo-European language despite its late attestation (with the earliest texts dating only to 1500). Lithuanian was studied by linguists such as Franz Bopp, August Schleicher, Adalbert Bezzenberger, Louis Hjelmslev, Ferdinand de Saussure, Winfred P. Lehmann and Vladimir Toporov and others. The Proto-Balto-Slavic languages branched off directly from Proto-Indo-European, then sub-branched into Proto-Baltic and Proto-Slavic. Proto-Baltic branched off into Proto-West Baltic and Proto-East Baltic. Baltic languages passed through a Proto-Balto-Slavic stage, from which Baltic languages retain numerous exclusive and non-exclusive lexical, morphological, phonological and accentual isoglosses in common with the Slavic languages, which represent their closest living Indo-European relatives. Moreover, with Lithuanian being so archaic in phonology, Slavic words can often be deduced from Lithuanian by regular sound laws; for example, Lith. ''vilkas'' and Polish wilk ← PBSl. *wilkás (cf. PSl. *vьlkъ) ← PIE *wĺ̥kʷos, all meaning "wolf". According to some glottochronological speculations, the Eastern Baltic languages split from the Western Baltic ones between AD 400 and 600. The Greek geographer Ptolemy had already written of two Baltic tribe/nations by name, the Galindai and Sudinoi (Γαλίνδαι, Σουδινοί) in the 2nd century AD. The differentiation between Lithuanian and Latvian started after 800; for a long period, they could be considered dialects of a single language. At a minimum, transitional dialects existed until the 14th or 15th century and perhaps as late as the 17th century. Also, the 13th- and 14th-century occupation of the western part of the Daugava basin (closely coinciding with the territory of modern Latvia) by the German Sword Brethren had a significant influence on the languages' independent development. The earliest surviving written Lithuanian text is a translation dating from about 1503–1525 of the Lord's Prayer, the Hail Mary, and the Nicene Creed written in the Southern Aukštaitian dialect. Printed books existed after 1547, but the level of literacy among Lithuanians was low through the 18th century, and books were not commonly available. In 1864, following the January Uprising, Mikhail Muravyov, the Russian Governor General of Lithuania, banned the language in education and publishing and barred use of the Latin alphabet altogether, although books printed in Lithuanian continued to be printed across the border in East Prussia and in the United States. Brought into the country by book smugglers ( lt|knygnešiai|links=no) despite the threat of stiff prison sentences, they helped fuel a growing nationalist sentiment that finally led to the lifting of the ban in 1904. Jonas Jablonskis (1860–1930) made significant contributions to the formation of the standard Lithuanian language. The conventions of written Lithuanian had been evolving during the 19th century, but Jablonskis, in the introduction to his ''Lietuviškos kalbos gramatika'', was the first to formulate and expound the essential principles that were so indispensable to its later development. His proposal for Standard Lithuanian was based on his native Western Aukštaitijan dialect with some features of the eastern Prussian Lithuanians' dialect spoken in Lithuania Minor. These dialects had preserved archaic phonetics mostly intact due to the influence of the neighbouring Old Prussian language, while the other dialects had experienced different phonetic shifts. Lithuanian has been the official language of Lithuania since 1918. During the Soviet era (see History of Lithuania), it was used in official discourse along with Russian, which, as the official language of the USSR, took precedence over Lithuanian.

Lithuanian is one of two living Baltic languages, along with Latvian, and they constitute the eastern branch of Baltic languages family. An earlier Baltic language, Old Prussian, was extinct by the 18th century; the other Western Baltic languages, Curonian and Sudovian, became extinct earlier. Some theories, such as that of Jānis Endzelīns, considered that the Baltic languages form their own distinct branch of the family of Indo-European languages. There is also an opinion that suggests the union of Baltic and Slavic languages into a distinct sub-family of Balto-Slavic languages amongst the Indo-European family of languages. Such an opinion was first represented by the likes of August Schleicher, and to a certain extent, Antoine Meillet. Endzelīns thought that the similarity between Baltic and Slavic was explicable through language contact while Schleicher, Meillet and others argued for a genetic kinship between the two families. An attempt to reconcile the opposing stances was made by Jan Michał Rozwadowski. He proposed that the two language groups were indeed a unity after the division of Indo-European, but also suggested that after the two had divided into separate entities (Baltic and Slavic), they had posterior contact. The genetic kinship view is augmented by the fact that Proto-Balto-Slavic is easily reconstructible with important proofs in historic prosody. The alleged (or certain, as certain as historic linguistics can be) similarities due to contact are seen in such phenomena as the existence of definite adjectives formed by the addition of an inflected pronoun (descended from the same Proto-Indo-European pronoun), which exist in both Baltic and Slavic yet nowhere else in the Indo-European family (languages such as Albanian and the Germanic languages developed definite adjectives independently), and that are not reconstructible for Proto-Balto-Slavic, meaning that they most probably developed through language contact. The Baltic hydronyms area stretches from the Vistula River in the west to the east of Moscow and from the Baltic Sea in the north to the south of Kyiv. Vladimir Toporov and Oleg Trubachyov (1961, 1962) studied Baltic hydronyms in the Russian and Ukrainian territory. Hydronyms and archeology analysis show that the Slavs started migrating to the Baltic areas east and north-east directions in the 6-7th centuries, before then, the Baltic and Slavic boundary was south of the Pripyat River. In the 1960s Vladimir Toporov and Vyacheslav Ivanov made the following conclusions about the relationship between the Baltic and Slavic languages: a) the Proto-Slavic language formed from the peripheral-type Baltic dialects; b) the Slavic linguistic type formed later from the structural model of the Baltic languages; c) the Slavic structural model is a result of a transformation of the structural model of the Baltic languages. These scholars’ theses do not contradict the Baltic and Slavic languages closeness and from a historical perspective specify the Baltic-Slavic languages evolution.

Lithuanian is spoken mainly in Lithuania. It is also spoken by ethnic Lithuanians living in today's Belarus, Latvia, Poland, and the Kaliningrad Oblast of Russia, as well as by sizable emigrant communities in Argentina, Australia, Brazil, Canada, Denmark, Estonia, France, Germany, Iceland, Ireland, Norway, Russia, Sweden, the United Kingdom, the United States, Uruguay, and Spain. 2,955,200 people in Lithuania (including 3,460 Tatars), or about 86% of the 2015 population, are native Lithuanian speakers; most Lithuanian inhabitants of other nationalities also speak Lithuanian to some extent. The total worldwide Lithuanian-speaking population is about 3,200,000.

Lithuanian is the state language of Lithuania and an official language of the European Union.

The Lithuanian language has two dialects: Aukštaičių (Aukštaitian, Highland Lithuanian) and Žemaičių/Žemaitiu (Samogitian, Lowland Lithuanian). There are significant differences between standard Lithuanian and Samogitian and these were often described as separate languages. The modern Samogitian dialect formed in the 13th–16th centuries under the influence of the Curonian language. Lithuanian dialects are closely connected with ethnographical regions of Lithuania. Dialects are divided into subdialects. Both dialects have three subdialects. Samogitian is divided into West, North and South; Aukštaitian into West (Suvalkiečiai), South (Dzūkai) and East. Standard Lithuanian is derived mostly from Western Aukštaitian dialects, including the Eastern dialect of Lithuania Minor. The influence of other dialects is more significant in the vocabulary of standard Lithuanian.

Lithuanian uses the Latin script supplemented with diacritics. It has 32 letters. In the collation order, ''y'' follows immediately after ''į'' (called ''i nosinė''), because both ''y'' and ''į'' represent the same long vowel : In addition, the following digraphs are used, but are treated as sequences of two letters for collation purposes. The digraph ''ch'' represents a single sound, the velar fricative , while ''dz'' and ''dž'' are pronounced like straightforward combinations of their component letters (sounds): Dz dz (dzė), Dž dž (džė), Ch ch (cha). The Lithuanian writing system is largely phonemic, i.e., one letter usually corresponds to a single phoneme (sound). There are a few exceptions: for example, the letter ''i'' represents either the vowel , as in the English ''sit'', or is silent and merely indicates that the preceding consonant is palatalized. The latter is largely the case when ''i'' occurs after a consonant and is followed by a back or a central vowel, except in some borrowed words (e.g., the first consonant in ''lūpa'' , "lip", is a velarized dental lateral approximant; on the other hand, the first consonant in ''liūtas'' , "lion", is a palatalized alveolar lateral approximant; both consonants are followed by the same vowel, the long , and no can be pronounced in ''liūtas''). Before the 20th century, due to the Lithuanian press ban, Lithuanian alphabet included the Polish Ł for the first sound and regular L (without a following i) for the second: ''łupa'', ''lutas''. A macron (on ''u''), an ogonek (on ''a'', ''e'', ''i'', and ''u''), and ''y'' (in place of ''i'') are used for grammatical and historical reasons and always denote vowel length in Modern Standard Lithuanian. Acute, grave, and tilde diacritics are used to indicate pitch accents. However, these pitch accents are generally not written, except in dictionaries, grammars, and where needed for clarity, such as to differentiate homonyms and dialectal use.

All Lithuanian consonants except have two variants: the non-palatalized one represented by the IPA symbols in the chart, and the palatalized one (i.e.  – ,  – ,  – , and so on). The consonants , , and their palatalized variants are only found in loanwords. have been traditionally transcribed with , but they can be seen as equivalent transcriptions, with the former set being somewhat easier to write.

Lithuanian has six long vowels and four short ones (not including disputed phonemes marked in brackets). Length has traditionally been considered the distinctive feature, though short vowels are also more centralized and long vowels more peripheral: * are restricted to loanwords. Many speakers merge the former with .

The Lithuanian prosodic system is characterized by free accent and distinctive quantity. Its accentuation is sometimes described as a simple tone system, often called pitch accent.