Tristan da Cunha (), colloquially Tristan, is a remote group of volcanic islands in the south Atlantic Ocean. It is the most remote inhabited archipelago in the world, lying approximately off the coast of Cape Town in South Africa, from Saint Helena and off the coast of the Falkland Islands. These distances equate respectively to 1505, 1316 and 2161 nautical miles. The territory consists of the inhabited island, Tristan da Cunha, which has a diameter of roughly and an area of ; the wildlife reserves of Gough Island and Inaccessible Island; and the smaller, uninhabited Nightingale Islands. , the main island has 250 permanent inhabitants, who all carry British Overseas Territories citizenship. The other islands are uninhabited, except for the South African personnel of a weather station on Gough Island. Tristan da Cunha is a British Overseas Territory with its own constitution. There is no airstrip on the main island; the only way of travelling in and out of Tristan is by boat, a six-day trip from South Africa. 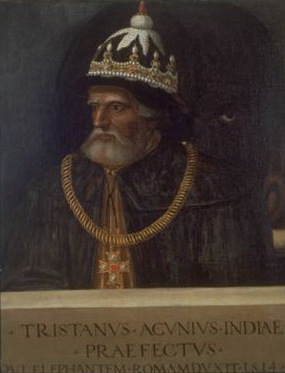 The islands were first recorded as sighted in 1506 by Portuguese explorer Tristão da Cunha, though rough seas prevented a landing. He named the main island after himself, ''Ilha de Tristão da Cunha.'' It was later anglicised from its earliest mention on British Admiralty charts to Tristan da Cunha Island. Some sources state that the Portuguese made the first landing in 1520, when the ''Lás Rafael'' captained by Ruy Vaz Pereira called at Tristan for water. The first undisputed landing was made on 7 February 1643 by the crew of the Dutch East India Company ship ''Heemstede,'' captained by Claes Gerritsz Bierenbroodspot. The Dutch stopped at the island four more times in the next 25 years, and in 1656 created the first rough charts of the archipelago. The first full survey of the archipelago was made by crew of the French corvette ''Heure du Berger'' in 1767. The first scientific exploration was conducted by French naturalist Louis-Marie Aubert du Petit-Thouars, who stayed on the island for three days in January 1793, during a French mercantile expedition from Brest, France to Mauritius. Thouars made botanical collections and reported traces of human habitation, including fireplaces and overgrown gardens, probably left by Dutch explorers in the 17th century.