Click Here for Items Related To - Australian Academy of Science

The Australian Academy of Science was founded in 1954 by a group of distinguished Australians, including Australian Fellows of the Royal Society of London. The first president was Sir Mark Oliphant. The Academy is modelled after the Royal Society and operates under a Royal Charter; as such, it is an independent body, but it has government endorsement. The Academy Secretariat is in Canberra, at the Shine Dome. The objectives of the Academy are to promote science and science education through a range of activities. It has defined four major program areas: :* Recognition of outstanding contributions to science :* Education and public awareness :* Science policy :* International relations The Academy also runs the 22 National Committees for Science which provide a forum to discuss issues relevant to all the scientific disciplines in Australia. 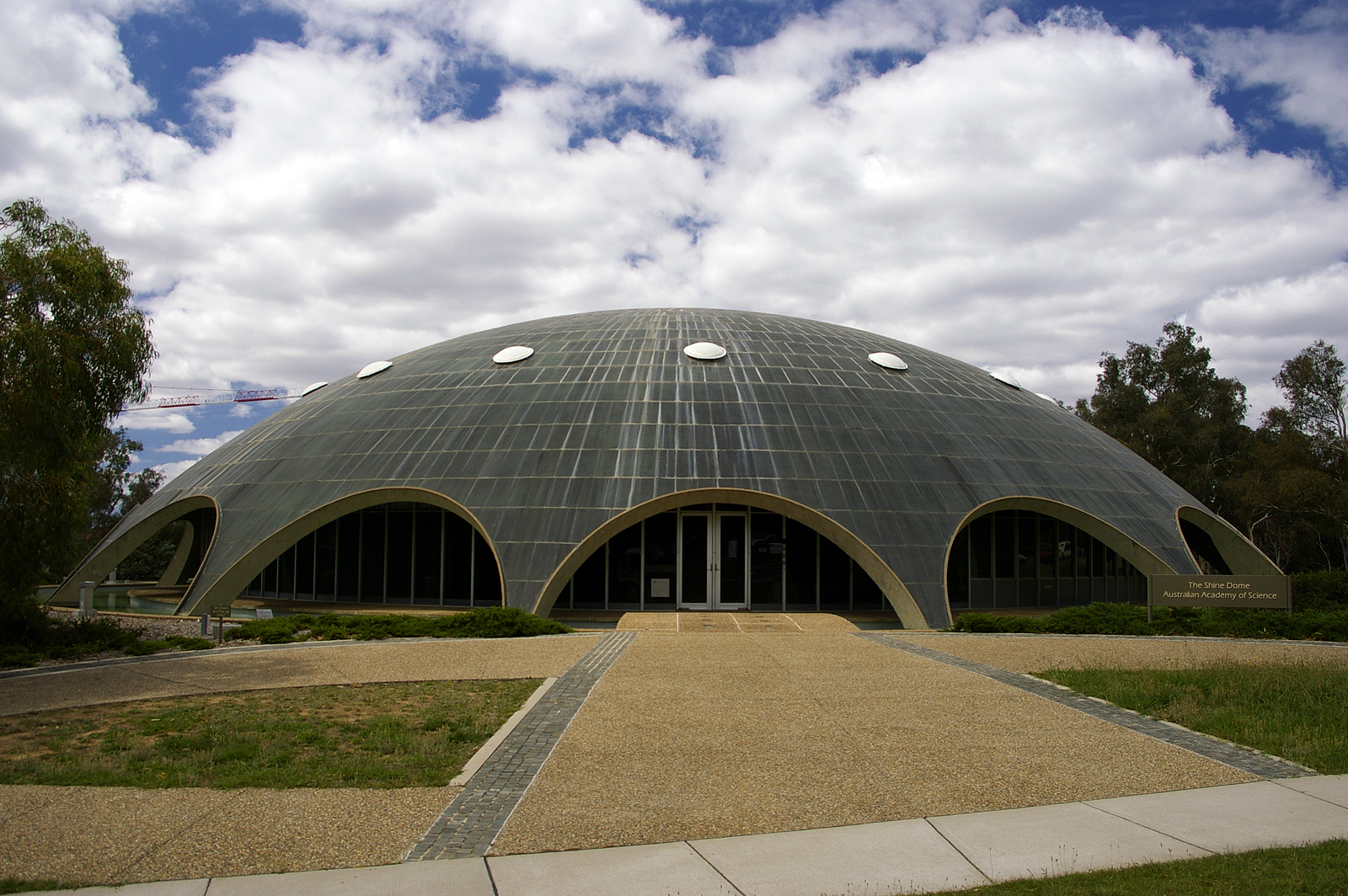 The Shine Dome (previously known as Becker House) is a well-known Canberra landmark, notable for its unusual structure, and colloquially referred to as "The Martian Embassy", an allusion to its shape and the fact that as the capital of Australia, Canberra is the home of foreign embassies. It was designed by architect Sir Roy Grounds, of Grounds, Romberg and Boyd. When completed in 1959 its 45.75-metre-diameter dome was the largest in Australia. On 1 December 1956, the Academy's building design committee met in Adelaide to look over plans submitted by six architects. The plan accepted involved a 710-tonne reinforced concrete dome, which had to be supported by 16 thin supports. The concrete is approximately 60 cm thick at the base supports, and 10 cm at the top. The dome supports itself, with no internal wall holding it up. It cost £200,000 to build. The foundation stone, laid on 2 May 1958 by Prime Minister of Australia, Robert Menzies, was originally part of the pier of the Great Melbourne Telescope constructed in 1869 under the supervision of the Royal Society and transferred to Mount Stromlo Observatory in the 1940s. The building was named Becker House, for benefactor and Fellow of the Academy Sir Jack Ellerton Becker, in 1962. In 2000, it was renamed in honour of Fellow John Shine, who donated one million dollars to renovate the dome. The interior contains three floors: on the ground level, the main auditorium, the Ian Wark Theatre, seats 156 people, the Jaeger Room for functions and meetings, the Becker Council Meeting Room and offices; the upper level includes a gallery to the theatre and the Adolf Basser Library; and the basement houses storage for historical records of science in Australia. In 2016, the dome appeared in the television documentary series about Australian modernist architecture ''Streets of Your Town'' presented by Tim Ross. On 20 January 2020 the Dome was seriously damaged by a hailstorm with smashed skylights and denting of the copper roof surface.

The Fellowship of the Australian Academy of Science is made up of around 500 leading Australian scientists. Scientists judged by their peers to have made an exceptional contribution to knowledge in their field may be elected to Fellowship of the Academy. Twenty new Fellows may be elected every year. No more than two Fellows may be elected every three years on the basis of distinguished contributions to science by means other than personal research. A small number of distinguished foreign scientists with substantial connections to Australian science are elected as Corresponding Members. Fellows are denoted by the letters FAA (Fellow of the Australian Academy of Science) after their name.

When the Academy was founded in 1954 there were 24 members, known as the Foundation Fellows: