Richmond () is a city in western Contra Costa County, California, United States. The city was incorporated on August 7, 1905 and has a city council. Located in the San Francisco Bay Area's East Bay region, Richmond borders San Pablo, Albany, El Cerrito and Pinole in addition to the unincorporated communities of North Richmond, Hasford Heights, Kensington, El Sobrante, Bayview-Montalvin Manor, Tara Hills, and East Richmond Heights, and for a short distance San Francisco on Red Rock Island in the San Francisco Bay. Richmond is one of two cities, the other being San Rafael, California, that sits on the shores of both San Francisco Bay and San Pablo Bay. During Gayle McLaughlin's mayoralty, Richmond was the nation's largest city with a Green Party mayor. As of the 2010 U.S. Census, the city's population was 103,710, making it the country's second-largest city named Richmond. The largest is Richmond, Virginia.

The name "Richmond" predates incorporation of the city by more than fifty years. Edmund Randolph, originally from Richmond, Virginia, represented the city of San Francisco when California's first legislature met in San Jose in December 1849, and he became state assemblyman from San Francisco. Out of fondness for his home town, Randolph persuaded a federal surveying party, surveying and mapping the San Francisco Bay, to place the names "Point Richmond" and "Richmond" on their 1854 geodetic coastal map. The map was used at the terminal selected by the San Francisco and San Joaquin Valley Railroad. By 1899 maps made by the railroad carried the name "Point Richmond Avenue", a county road that later became Barrett Avenue, a central street in Richmond. The Atchison, Topeka and Santa Fe Railroad purchased the railroad making their terminus at Richmond. The first post office opened in 1900, and the city of Richmond incorporated in 1905. 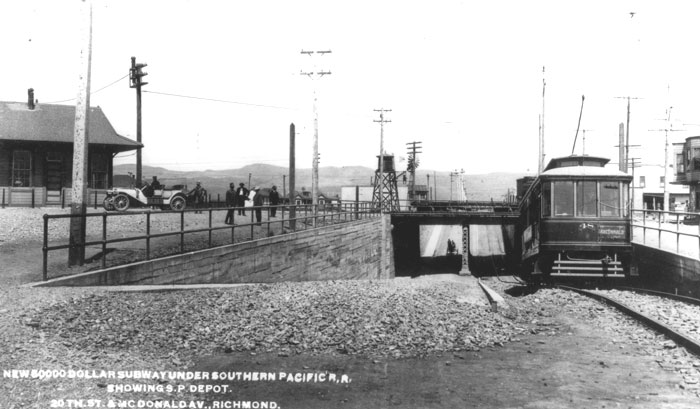 The Ohlone were the first inhabitants of the Richmond area, settling an estimated 5,000 years ago. They spoke the Chochenyo language, and subsisted as hunter-gatherers and harvesters. The city of Richmond was carved out of Rancho San Pablo, from which the nearby town of San Pablo inherited its name. Until the enactment of prohibition in 1919, the city had the largest winery in the world; the small abandoned village of Winehaven remains fenced off along Western Drive in the Point Molate Area. From 1917 and throughout the 1920s, the Ku Klux Klan was active in the city. In 1930 the Ford Motor Company opened the Richmond Assembly Plant, which moved to Milpitas in 1956. The old Ford plant has been a National Historic Place since 1988. In 2004 it was purchased by developer Eddie Orton, who converted it into an events center (Ford Point Building–The Craneway). Richmond was a small town at that time, until the onset of World War II brought a rush of migrants and a boom in the industrial sector. Standard Oil set up operations there in 1901, including what is now the Chevron Richmond Refinery and tank farm, which Chevron still operates. There is a pier into San Francisco Bay south of Point Molate for oil tankers. The Santa Fe Railroad's western terminus was established in Richmond with ferry connections at Ferry Point in the Brickyard Cove area of Point Richmond to San Francisco. At the outset of World War II, the four Richmond Shipyards were built along Richmond's waterfront, employing thousands of workers, many recruited from other parts of the country, including many African-Americans and women entering the workforce for the first time. Many of these workers lived in specially constructed houses scattered throughout the San Francisco Bay Area, including Richmond, Berkeley and Albany. A specially built rail line, the Shipyard Railway, transported workers to the shipyards. Kaiser's Richmond shipyards built 747 Victory and Liberty ships for the war effort, more than any other site in the U.S. The city broke many records and even built a Liberty ship in a record five days. On average the yards could build a ship in 30 days. The medical system established for the shipyard workers at the Richmond Field Hospital eventually became today's Kaiser Permanente HMO. It remained in operation until 1993, when it was replaced by the Richmond Medical Center hospital, which has since expanded to a multi-building campus. Point Richmond was originally Richmond's commercial hub, but a new downtown arose in the center of the city. It was populated by department stores such as Kress, J.C. Penney, Sears, Macy's, and Woolworth's. During the war Richmond's population increased dramatically, peaking at around 120,000 by 1945. When the war ended the shipyard workers were no longer needed, and a decades-long population decline ensued. The census listed 99,545 residents in 1950. By 1960 much of the temporary housing built for the shipyard workers was torn down, and the population dropped to about 71,000. Many of the people who moved to Richmond were black and came from the Midwest and South. Most of the white men were overseas at war, and this opened up new opportunities for ethnic minorities and women. This era also brought with it the innovation of daycare for children, as a few women could care for several dozen women's children while their mothers worked in the factories and shipyards. 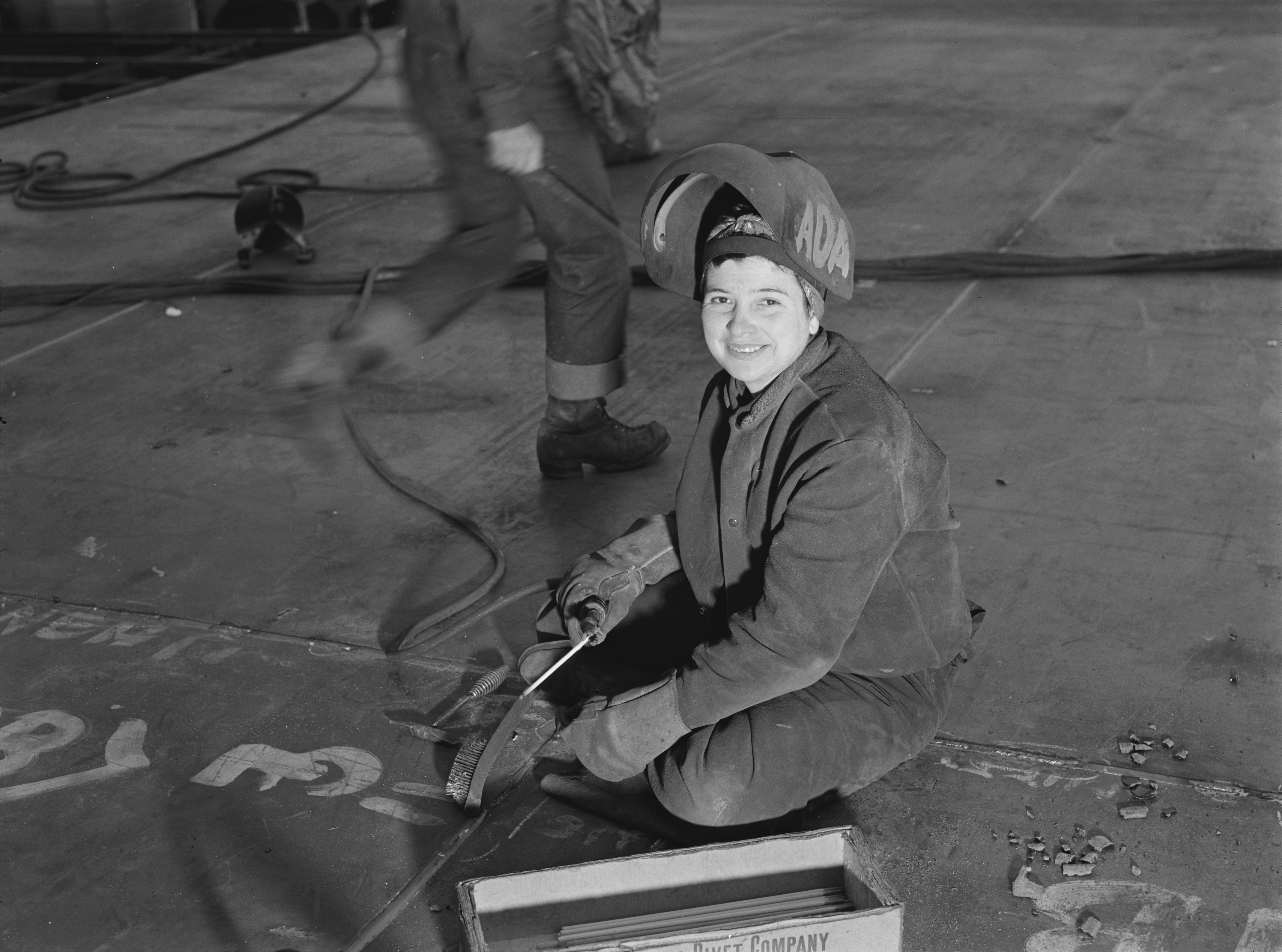 In the 1970s, the Hilltop area, including a large shopping mall, was developed in Richmond's northern suburbs, further depressing the downtown area as it drew retail clients and tenants away. In the late 1990s and early 2000s the Richmond Parkway was built along Richmond's western industrial and northwestern parkland, connecting Interstates 80 and 580. In the early 1900s, the Santa Fe railroad established a major railyard next to Point Richmond. It constructed a tunnel through the Potrero San Pablo ridge to run track from the yard to a ferry landing from which freight cars could be transshipped to San Francisco. Where this track crosses the main street in Point Richmond, there remain two of the last operational wigwag grade crossing signals in the United States, and the only surviving examples of the "upside-down" type. The wigwag is a type of railroad crossing signal that was phased out in the 1970s and '80s across the country. There was controversy in 2005 when the State Transportation Authority ordered the BNSF railroad company to upgrade the railroad crossing signals. A compromise was achieved that included installing new modern crossing gates, red lights and bells while not removing, but simply shutting off, the historic ones and preserving their functionality for special events. The Pullman Company also established a major facility in Richmond in the early 20th century. The facility connected with both the Santa Fe and Southern Pacific and serviced their passenger coach equipment. The Pullman Company was a large employer of African American men, who worked mainly as porters on the Pullman cars. Many of them settled in the East Bay, from Richmond to Oakland, before World War II. Just before the April 1968 assassination of Martin Luther King Jr., King had been working on plans for the Poor People's Campaign, including a multi-city tour of the U.S. with a stop in Richmond. His son, Martin Luther King III, completed the Poverty in America Tour in 2007, stopping in Richmond.