Boston (, ), officially the City of Boston, is the capital and most populous city of the Commonwealth of Massachusetts in the United States and 21st most populous city in the country. The city proper covers with an estimated population of 692,600 in 2019, also making it the most populous city in New England. It is the seat of Suffolk County (although the county government was disbanded on July 1, 1999). The city is the economic and cultural anchor of a substantially larger metropolitan area known as Greater Boston, a metropolitan statistical area (MSA) home to a census-estimated 4.8 million people in 2016 and ranking as the tenth-largest MSA in the country. A broader combined statistical area (CSA), corresponding to the commuting area and including Providence, Rhode Island, is home to some 8.2 million people, making it the sixth most populous in the United States. Boston is one of the oldest municipalities in the United States, founded on the Shawmut Peninsula in 1630 by Puritan settlers from the English town of the same name. It was the scene of several key events of the American Revolution, such as the Boston Massacre, the Boston Tea Party, the Battle of Bunker Hill and the siege of Boston. Upon American independence from Great Britain, the city continued to be an important port and manufacturing hub as well as a center for education and culture. The city has expanded beyond the original peninsula through land reclamation and municipal annexation. Its rich history attracts many tourists, with Faneuil Hall alone drawing more than 20 million visitors per year. Boston's many firsts include the United States' first public park (Boston Common, 1634), first public or state school (Boston Latin School, 1635) and first subway system (Tremont Street subway, 1897). Today, Boston is a thriving center of scientific research. The Boston area's many colleges and universities make it a world leader in higher education, including law, medicine, engineering and business, and the city is considered to be a global pioneer in innovation and entrepreneurship, with nearly 5,000 startups. Boston's economic base also includes finance, professional and business services, biotechnology, information technology and government activities. Households in the city claim the highest average rate of philanthropy in the United States; businesses and institutions rank among the top in the country for environmental sustainability and investment. The city has one of the highest costs of living in the United States as it has undergone gentrification, though it remains high on world livability rankings.

Boston's early European settlers had first called the area ''Trimountaine'' (after its "three mountains", only traces of which remain today) but later renamed it ''Boston'' after Boston, Lincolnshire, England, the origin of several prominent colonists. The renaming on September 7, 1630 (Old Style), was by Puritan colonists from England who had moved over from Charlestown earlier that year in quest for fresh water. Their settlement was initially limited to the Shawmut Peninsula, at that time surrounded by the Massachusetts Bay and Charles River and connected to the mainland by a narrow isthmus. The peninsula is thought to have been inhabited as early as 4000 BC. In 1629, the Massachusetts Bay Colony's first governor John Winthrop led the signing of the Cambridge Agreement, a key founding document of the city. Puritan ethics and their focus on education influenced its early history; America's first public school, Boston Latin School, was founded in Boston in 1635. John Hull and the pine tree shilling played a central role in the establishment of the Massachusetts Bay Colony and the Old South Church in the 1600s. In 1652 the Massachusetts legislature authorized John Hull to produce coinage. "The Hull Mint produced several denominations of silver coinage, including the pine tree shilling, for over 30 years until the political and economic situation made operating the mint no longer practical." King Charles II for reasons which were mostly political deemed the "Hull Mint" high treason which had a punishment of being hanged, drawn and quartered. "On April 6, 1681, Edward Randolph petitioned the king, informing him the colony was still pressing their own coins which he saw as high treason and believed it was enough to void the charter. He asked that a writ of Quo warranto (a legal action requiring the defendant to show what authority they have for exercising some right, power, or franchise they claim to hold) be issued against Massachusetts for the violations." Boston was the largest town in the Thirteen Colonies until Philadelphia outgrew it in the mid-18th century. Boston's oceanfront location made it a lively port, and the city primarily engaged in shipping and fishing during its colonial days. However, Boston stagnated in the decades prior to the Revolution. By the mid-18th century, New York City and Philadelphia surpassed Boston in wealth. During this period, Boston encountered financial difficulties even as other cities in New England grew rapidly.

Revolution and the siege of Boston

into Boston Harbor as a response to the Tea Act, in an event known as the Boston Tea Party. 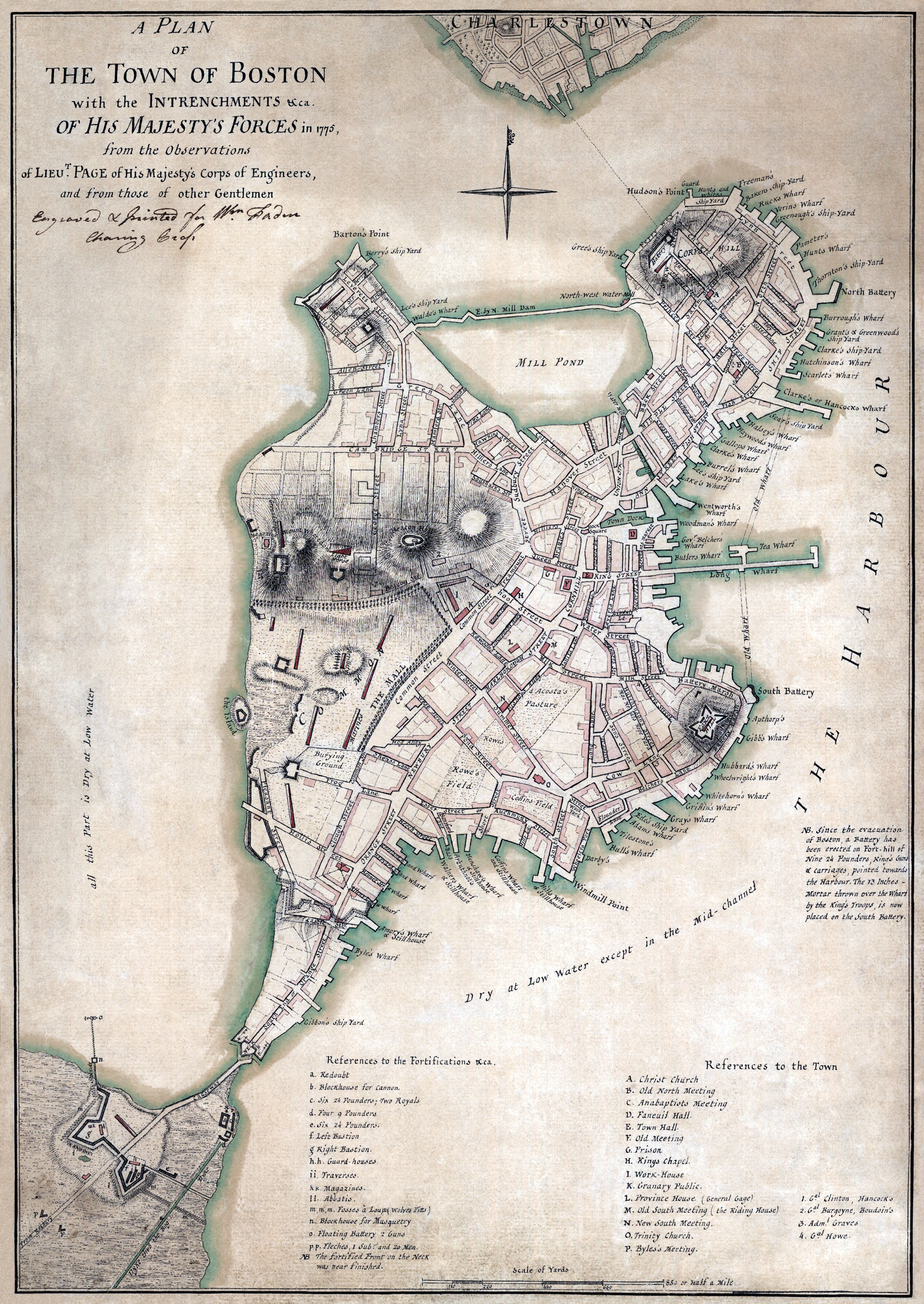 Many of the crucial events of the American Revolution occurred in or near Boston. Boston's penchant for mob action along with the colonists' growing lack of faith in either Britain or its Parliament fostered a revolutionary spirit in the city. When the British parliament passed the Stamp Act in 1765, a Boston mob ravaged the homes of Andrew Oliver, the official tasked with enforcing the Act, and Thomas Hutchinson, then the Lieutenant Governor of Massachusetts. The British sent two regiments to Boston in 1768 in an attempt to quell the angry colonists. This did not sit well with the colonists. In 1770, during the Boston Massacre, British troops shot into a crowd that had started to violently harass them. The colonists compelled the British to withdraw their troops. The event was widely publicized and fueled a revolutionary movement in America.

In 1773, Parliament passed the Tea Act. Many of the colonists saw the act as an attempt to force them to accept the taxes established by the Townshend Acts. The act prompted the Boston Tea Party, where a group of angered Bostonian citizens threw an entire shipment of tea sent by the East India Company into Boston Harbor. The Boston Tea Party was a key event leading up to the revolution, as the British government responded furiously with the Coercive Acts, demanding compensation for the destroyed tea from the Bostonians. This angered the colonists further and led to the American Revolutionary War. The war began in the area surrounding Boston with the Battles of Lexington and Concord. Boston itself was besieged for almost a year during the siege of Boston, which began on April 19, 1775. The New England militia impeded the movement of the British Army. Sir William Howe, then the commander-in-chief of the British forces in North America, led the British army in the siege. On June 17, the British captured the Charlestown peninsula in Boston, during the Battle of Bunker Hill. The British army outnumbered the militia stationed there, but it was a pyrrhic victory for the British because their army suffered irreplaceable casualties. It was also a testament to the skill and training of the militia, as their stubborn defence made it difficult for the British to capture Charlestown without suffering further irreplaceable casualties. Several weeks later, George Washington took over the militia after the Continental Congress established the Continental Army to unify the revolutionary effort. Both sides faced difficulties and supply shortages in the siege, and the fighting was limited to small-scale raids and skirmishes. The narrow Boston Neck, which at that time was only about a hundred feet wide, impeded Washington's ability to invade Boston, and a long stalemate ensued. A young officer, Rufus Putnam, came up with a plan to make portable fortifications out of wood that could be erected on the frozen ground under cover of darkness. Putnam supervised this effort, which successfully installed both the fortifications and dozens of cannon on Dorchester Heights that Henry Knox had laboriously brought through the snow from Fort Ticonderoga. The astonished British awoke the next morning to see a large array of cannons bearing down on them. General Howe is believed to have said that the Americans had done more in one night than his army could have done in six months. The British Army attempted a cannon barrage for two hours, but their shot could not reach the colonists' cannons at such a height. The British gave up, boarded their ships and sailed away. Boston still celebrates "Evacuation Day" each year. Washington was so impressed, he made Rufus Putnam his chief engineer.

After the Revolution, Boston's long seafaring tradition helped make it one of the world's wealthiest international ports, with the slave trade, rum, fish, salt, and tobacco being particularly important. Boston's harbor activity was significantly curtailed by the Embargo Act of 1807 (adopted during the Napoleonic Wars) and the War of 1812. Foreign trade returned after these hostilities, but Boston's merchants had found alternatives for their capital investments in the interim. Manufacturing became an important component of the city's economy, and the city's industrial manufacturing overtook international trade in economic importance by the mid-19th century. A network of small rivers bordering the city and connecting it to the surrounding region facilitated shipment of goods and led to a proliferation of mills and factories. Later, a dense network of railroads furthered the region's industry and commerce.

During this period, Boston flourished culturally, as well, admired for its rarefied literary life and generous artistic patronage, with members of old Boston families—eventually dubbed ''Boston Brahmins''—coming to be regarded as the nation's social and cultural elites. Boston was an early port of the Atlantic triangular slave trade in the New England colonies, but was soon overtaken by Salem, Massachusetts and Newport, Rhode Island. Boston eventually became a center of the abolitionist movement. The city reacted strongly to the Fugitive Slave Act of 1850, contributing to President Franklin Pierce's attempt to make an example of Boston after the Anthony Burns Fugitive Slave Case. In 1822,