Scallions (also known as green onions or spring onions or sibies) are vegetables derived from various species in the genus ''Allium''. Scallions have a milder taste than most onions. Their close relatives include garlic, shallot, leek, chive, and Chinese onions. Although the bulbs of many ''Allium'' species are used as food, the defining characteristic of spring onion species is that they lack a fully developed bulb. ''Allium'' species referred to as spring onions have hollow, tubular green leaves growing directly from the bulb. These leaves are used as a vegetable; they are eaten either raw or cooked. The leaves are often chopped into other dishes, in the manner of onions or garlic.

The words ''scallion'' and ''shallot'' are related and can be traced back to the Ancient Greek () as described by the Greek writer Theophrastus. This name, in turn, seems to originate from the name of the ancient Canaan city of Ashkelon. The plant itself came from farther east of Europe. 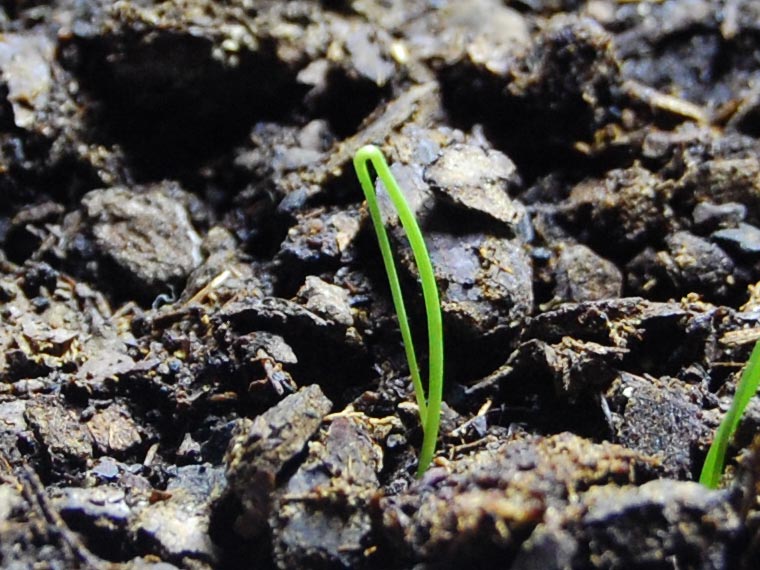 Species and cultivars that may be called "scallions" include: * ''A. cepa'' ** 'White Lisbon' ** 'White Lisbon Winter Hardy' – an extra-hardy variety for overwintering ** Calçot ** ''A. cepa'' var. ''cepa'' – Most of the cultivars grown in the West primarily as scallions belong to this variety. However, the "scallions" from ''A. cepa'' var. ''cepa'' (common onion) are from a young plant, harvested before a bulb forms or sometimes after slight bulbing has occurred. ** ''A. cepa'' var. ''aggregatum'' (formerly ''A. ascalonicum'') – commonly called shallots or sometimes ''eschalot''. * ''A. chinense'' * ''A. fistulosum'', the Welsh onion – does not form bulbs even when mature, and is grown in the West almost exclusively as a scallion or salad onion, although in Asia this species is of primary importance and used both fresh and cooked. * ''A.'' × ''proliferum'' – sometimes used as scallions

Commonly, scallions take 7-14 days to germinate depending on the variety.

Scallions may be cooked or used raw as a part of salads, salsas or Asian recipes. Diced scallions are used in soup, noodle and seafood dishes, sandwiches, curries and as part of a stir fry. In many Eastern sauces, the bottom half-centimetre (quarter-inch) of the root is commonly removed before use. In Mexico and the Southwest United States, ''cebollitas'' are scallions that are sprinkled with salt, grilled whole and eaten with cheese and rice. Topped with lime juice, they are typically served as a traditional accompaniment to ''asado'' dishes. In Catalan cuisine, ''calçot'' is a type of onion traditionally eaten in a ''calçotada'' (plural: ''calçotades''). A popular gastronomic event of the same name is held between the end of winter and early spring, where ''calçots'' are grilled, dipped in ''salvitxada'' or romesco sauce, and consumed in massive quantities. In Japan, tree onions (''wakegi'') are used mostly as topping of Japanese cuisine such like tofu. In China, scallion is commonly used together with ginger and garlic to cook a wide variety of vegetables and meat. The white part of scallion is usually fried with other ingredients while the green part is usually chopped to decorate finished food. In Vietnam, Welsh onion is important to prepare ''dưa hành'' (fermented onions) which is served for Tết, the Vietnamese New Year. A kind of sauce, ''mỡ hành'' (Welsh onion fried in oil), is used in dishes such as ''cơm tấm'', ''bánh ít'' and ''cà tím nướng''. Welsh onion is the main ingredient in the dish ''cháo hành'', which is a rice porridge used to treat the common cold. In India, it is eaten raw as an appetizer. In north India, coriander, mint and onion chutney are made using uncooked scallions. It is also used as a vegetable with Chapatis & Rotis. In the United Kingdom, scallions are sometimes chopped and added to mashed potatoes, known as champ particularly in Northern Ireland, or as an added ingredient to potato salad. In the southern Philippines, it is ground in a mortar along with ginger and chili pepper to make a native condiment called wet ''palapa'', which can be used to spice dishes or as a topping for fried or sun-dried food. It can also be used to make the dry version of ''palapa'', when it is stir fried with fresh coconut shavings and wet palapa. At the Passover meal (Seder), some Persian Jews strike one another with scallions before singing "Dayenu", thus re-enacting the whipping endured by the Hebrews enslaved by the ancient Egyptians.