Nuclear power is the use of nuclear reactions to produce electricity. Nuclear power can be obtained from nuclear fission, nuclear decay and nuclear fusion reactions. Presently, the vast majority of electricity from nuclear power is produced by nuclear fission of uranium and plutonium in nuclear power plants. Nuclear decay processes are used in niche applications such as radioisotope thermoelectric generators in some space probes such as Voyager 2. Generating electricity from fusion power remains the focus of international research. This article mostly deals with nuclear fission power for electricity generation. Civilian nuclear power supplied 2,586 terawatt hours (TWh) of electricity in 2019, equivalent to about 10% of global electricity generation, and was the second-largest low-carbon power source after hydroelectricity. there are 442 civilian fission reactors in the world, with a combined electrical capacity of 392 gigawatt (GW). There are also 53 nuclear power reactors under construction and 98 reactors planned, with a combined capacity of 60 GW and 103 GW, respectively. The United States has the largest fleet of nuclear reactors, generating over 800 TWh zero-emissions electricity per year with an average capacity factor of 92%. Most reactors under construction are generation III reactors in Asia. Nuclear power has one of the lowest levels of fatalities per unit of energy generated compared to other energy sources. Coal, petroleum, natural gas and hydroelectricity each have caused more fatalities per unit of energy due to air pollution and accidents. Since its commercialization in the 1970s, nuclear power has prevented about 1.84 million air pollution-related deaths and the emission of about 64 billion tonnes of carbon dioxide equivalent that would have otherwise resulted from the burning of fossil fuels. Accidents in nuclear power plants include the Chernobyl disaster in the Soviet Union in 1986, the Fukushima Daiichi nuclear disaster in Japan in 2011, and the more contained Three Mile Island accident in the United States in 1979. There is a debate about nuclear power. Proponents, such as the World Nuclear Association and Environmentalists for Nuclear Energy, contend that nuclear power is a safe, sustainable energy source that reduces carbon emissions. Nuclear power opponents, such as Greenpeace and NIRS, contend that nuclear power poses many threats to people and the environment. 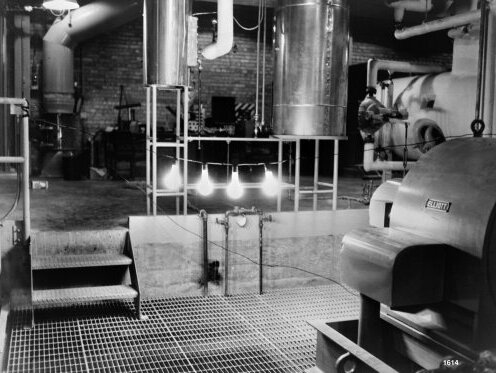 The discovery of nuclear fission occurred in 1938 following over four decades of work on the science of radioactivity and the elaboration of new nuclear physics that described the components of atoms. Soon after the discovery of the fission process, it was realized that a fissioning nucleus can induce further nucleus fissions, thus inducing a self-sustaining chain reaction. Once this was experimentally confirmed in 1939, scientists in many countries petitioned their governments for support of nuclear fission research, just on the cusp of World War II, for the development of a nuclear weapon. In the United States, these research efforts led to the creation of the first man-made nuclear reactor, the Chicago Pile-1, which achieved criticality on December 2, 1942. The reactor's development was part of the Manhattan Project, the Allied effort to create atomic bombs during World War II. It led to the building of larger single-purpose production reactors for the production of weapons-grade plutonium for use in the first nuclear weapons. The United States tested the first nuclear weapon in July 1945, the Trinity test, with the atomic bombings of Hiroshima and Nagasaki taking place one month later. 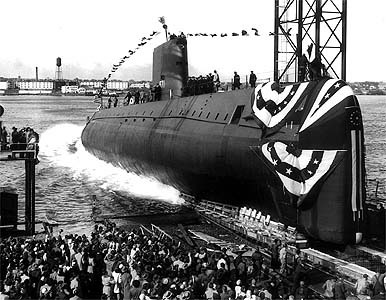 Despite the military nature of the first nuclear devices, the 1940s and 1950s were characterized by strong optimism for the potential of nuclear power to provide cheap and endless energy. Electricity was generated for the first time by a nuclear reactor on December 20, 1951, at the EBR-I experimental station near Arco, Idaho, which initially produced about 100 kW. In 1953, American President Dwight Eisenhower gave his "Atoms for Peace" speech at the United Nations, emphasizing the need to develop "peaceful" uses of nuclear power quickly. This was followed by the Atomic Energy Act of 1954 which allowed rapid declassification of U.S. reactor technology and encouraged development by the private sector.

The first organization to develop practical nuclear power was the U.S. Navy, with the S1W reactor for the purpose of propelling submarines and aircraft carriers. The first nuclear-powered submarine, , was put to sea in January 1954. The S1W reactor was a Pressurized Water Reactor. This design was chosen because it was simpler, more compact, and easier to operate compared to alternative designs, thus more suitable to be used in submarines. This decision would result in the PWR being the reactor of choice also for power generation, thus having a lasting impact on the civilian electricity market in the years to come. On June 27, 1954, the Obninsk Nuclear Power Plant in the USSR became the world's first nuclear power plant to generate electricity for a power grid, producing around 5 megawatts of electric power. The world's first commercial nuclear power station, Calder Hall at Windscale, England was connected to the national power grid on 27 August 1956. In common with a number of other generation I reactors, the plant had the dual purpose of producing electricity and plutonium-239, the latter for the nascent nuclear weapons program in Britain. The first major accident at a nuclear reactor occurred in 1961 at the SL-1, a U.S. Army experimental nuclear power reactor at the Idaho National Laboratory. An uncontrolled chain reaction resulted in a steam explosion which killed the three crew members and caused a meltdown. Another serious accident happened in 1968, when one of the two liquid-metal-cooled reactors on board the underwent a fuel element failure, with the emission of gaseous fission products into the surrounding air, resulting in 9 crew fatalities and 83 injuries.

The total global installed nuclear capacity initially rose relatively quickly, rising from less than 1 gigawatt (GW) in 1960 to 100 GW in the late 1970s. During the 1970s and 1980s rising economic costs (related to extended construction times largely due to regulatory changes and pressure-group litigation) and falling fossil fuel prices made nuclear power plants then under construction less attractive. In the 1980s in the U.S. and 1990s in Europe, the flat electric grid growth and electricity liberalization also made the addition of large new baseload energy generators economically unattractive.

The 1973 oil crisis had a significant effect on countries, such as France and Japan, which had relied more heavily on oil for electric generation to invest in nuclear power. France would construct 25 nuclear power plants over the next 15 years, and as of 2019, 71% of French electricity was generated by nuclear power, the highest percentage by any nation in the world. Some local opposition to nuclear power emerged in the United States in the early 1960s. In the late 1960s some members of the scientific community began to express pointed concerns. These anti-nuclear concerns related to nuclear accidents, nuclear proliferation, nuclear terrorism and radioactive waste disposal. In the early 1970s, there were large protests about a proposed nuclear power plant in Wyhl, Germany. The project was cancelled in 1975 the anti-nuclear success at Wyhl inspired opposition to nuclear power in other parts of Europe and North America. By the mid-1970s anti-nuclear activism gained a wider appeal and influence, and nuclear power began to become an issue of major public protest. In some countries, the nuclear power conflict "reached an intensity unprecedented in the history of technology controversies". The increased public hostility to nuclear power led to a longer license procurement process, regulations and increased requirements for safety equipment, which made new construction much more expensive. In the United States, over 120 LWR reactor proposals were ultimately cancelled and the construction of new reactors ground to a halt. The 1979 accident at Three Mile Island with no fatalities, played a major part in the reduction in the number of new plant constructions in many countries.

under construction in 2009. It was the first EPR, a modernized PWR design, to start construction. ]] During the 1980s one new nuclear reactor started up every 17 days on average. By the end of the decade, global installed nuclear capacity reached 300 GW. Since the late 1980s, new capacity additions slowed down significantly, with the installed nuclear capacity reaching 366 GW in 2005. The 1986 Chernobyl disaster in the USSR, involving an RBMK reactor, altered the development of nuclear power and led to a greater focus on meeting international safety and regulatory standards. It is considered the worst nuclear disaster in history both in total casualties, with 56 direct deaths, and financially, with the cleanup and the cost estimated at 18 billion Soviet rubles (US$68 billion in 2019, adjusted for inflation). The international organization to promote safety awareness and the professional development of operators in nuclear facilities, the World Association of Nuclear Operators (WANO), was created as a direct outcome of the 1986 Chernobyl accident. The Chernobyl disaster played a major part in the reduction in the number of new plant constructions in the following years.