Northeast India (officially North Eastern Region, NER) is the easternmost region of India representing both a geographic and political administrative division of the country. It comprises eight states – Arunachal Pradesh, Assam, Manipur, Meghalaya, Mizoram, Nagaland, Tripura and Sikkim. The region shares an international border of (about 99 percent of its total geographical boundary) with several neighbouring countries – with Tibet Autonomous Region, China in the north, with Myanmar in the east, with Bangladesh in the south-west, with Nepal in the west, and with Bhutan in the north-west. It comprises an area of , almost 8 percent of that of India. The states of North Eastern Region are officially recognised under the North Eastern Council (NEC), constituted in 1971 as the acting agency for the development of the north eastern states. Long after induction of NEC, Sikkim formed part of the North Eastern Region as the eighth state in 2002. India's Look-East connectivity projects connect Northeast India to East Asia and ASEAN. Guwahati city in Assam is called the Gateway to the North East and is the largest metropolis in North East India. 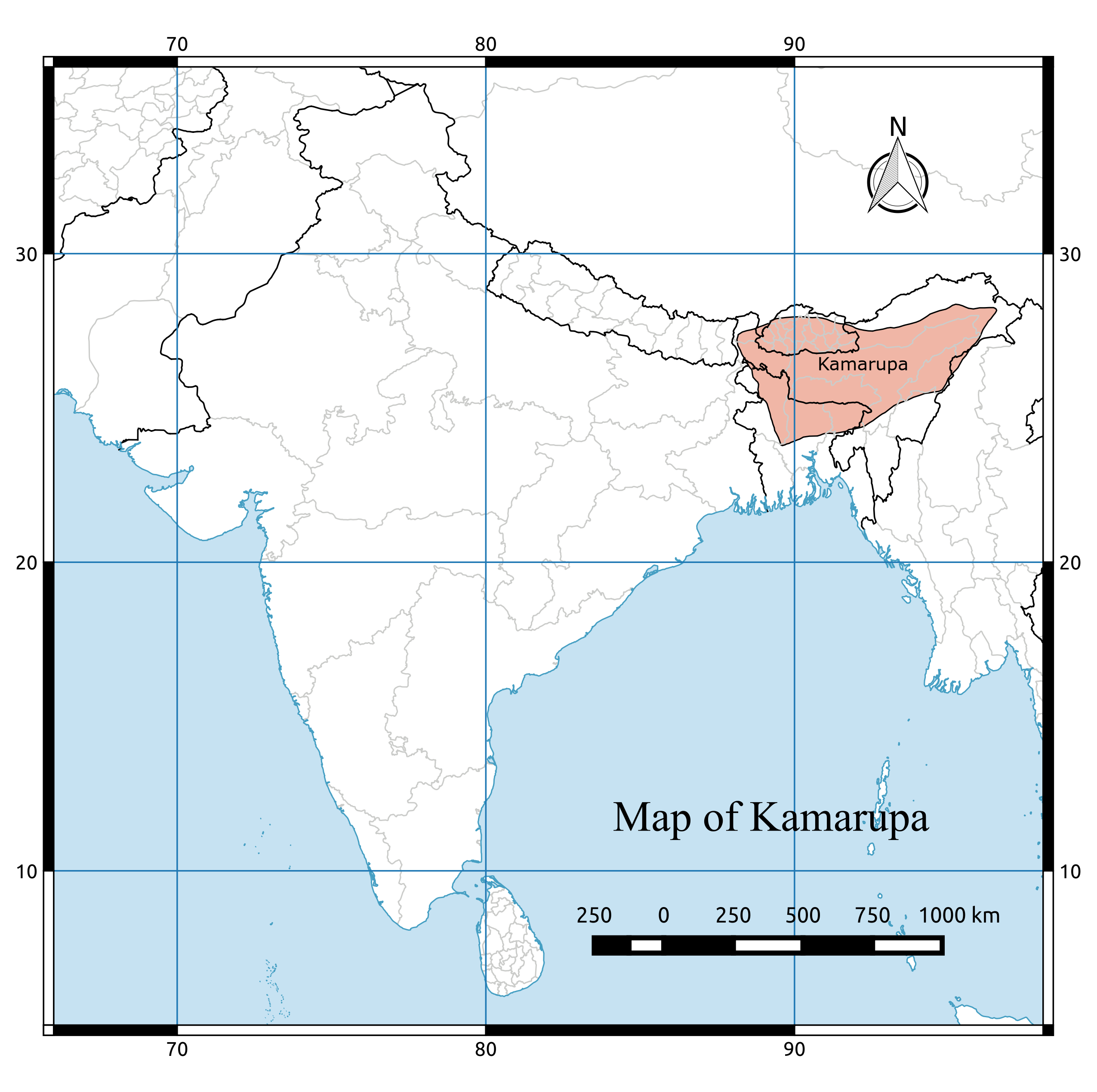 The earliest settlers may have been Austroasiatic languages speakers from Southeast Asia, followed by Tibeto-Burmese from China and by 500 BCE Indo-Aryans speakers from Gangetic Plains. Due to the bio- and crop diversity of the region, archaeological researchers believe that early settlers of Northeast India had domesticated several important plants. Writers believe that the 100 BCE writings of Chinese explorer Zhang Qian indicate an early trade route via Northeast India. The ''Periplus of the Erythraean Sea'' mention a people called Sêsatai in the region, who produced malabathron, so prized in the old world. Ptolemy's Geographia (2nd century CE) calls the region ''Kirrhadia'' after the Kirata population. In the early historical period (most of first millennium CE), Kamarupa straddled most of present-day Northeast India, besides Bhutan and Sylhet in Bangladesh. Xuanzang, a travelling Chinese Buddhist monk, visited Kamarupa in the 7th century CE. He described the people as "short in stature and black-looking", whose speech differed a little from mid-India and who were of simple but violent disposition. He wrote that the people in Kamarupa knew of Sichuan, which lay to the kingdom's east beyond a treacherous mountain. The northeastern states were established during the British Raj of the 19th and early 20th centuries, when they became relatively isolated from traditional trading partners such as Bhutan and Myanmar. Many of the peoples in present-day Mizoram, Meghalaya and Nagaland converted to Christianity under the influence of British (Welsh) missionaries.

In the early 19th century, both the Ahom and the Manipur kingdoms fell to a Burmese invasion. The ensuing First Anglo-Burmese War resulted in the entire region coming under British control. In the colonial period (1826–1947), North East India was made a part of Bengal Province from 1839 to 1873, after which Colonial Assam became its own province, but which included Sylhet. After Indian Independence from British Rule in 1947, the Northeastern region of British India consisted of Assam and the princely states of Manipur and Tripura. Subsequently, Nagaland in 1963, Meghalaya in 1972, Arunachal Pradesh in 1975 (capital changed to Itanagar) (formed on 20 February 1987) and Mizoram in 1987 were formed out of the large territory of Assam. Manipur and Tripura remained Union Territories of India from 1956 until 1972, when they attained fully-fledged statehood. Sikkim was integrated as the eighth North Eastern Council state in 2002. The city of Shillong served as the capital of the Assam province created during British Rule. It remained the capital of undivided Assam until the formation of the state of Meghalaya in 1972. The capital of Assam was shifted to Dispur, a part of Guwahati, and Shillong was designated as the capital of Meghalaya.

In 1944, the Japanese planned a daring attack on British India. Traveling through Burma, its forces were stopped at Kohima and Imphal by British and Indian troops. This marked the furthest western expansion of the Japanese Empire; its defeat in this area presaged Allied victory.

Arunachal Pradesh, a state in the Northeastern tip of India, is claimed by China as South Tibet. Sino-Indian relations degraded, resulting in the Sino-Indian War of 1962. The cause of the escalation into war is still disputed by both Chinese and Indian sources. During the war in 1962, the PRC (China) captured much of the NEFA (North-East Frontier Agency) created by India in 1954. But on 21 November 1962, China declared a unilateral ceasefire, and withdrew its troops behind the McMahon Line. It returned Indian prisoners of war in 1963.

The ''Seven Sister States'' is a popular term for the contiguous states of Arunachal Pradesh, Assam, Meghalaya, Manipur, Mizoram, Nagaland and Tripura prior to inclusion of the state of Sikkim into the North Eastern Region of India. The sobriquet 'Land of the Seven Sisters' was coined to coincide with the inauguration of the new states in January 1972 by Jyoti Prasad Saikia, a journalist in Tripura, in the course of a radio talk show. He later compiled a book on the interdependence and commonness of the Seven Sister States. It has been primarily because of this publication that the nickname has caught on.

The Northeast region can be physiographically categorised into the Eastern Himalaya, the Patkai and the Brahmaputra and the Barak valley plains. Northeast India (at the confluence of Indo-Malayan, Indo-Chinese, and Indian biogeographical realms) has a predominantly humid sub-tropical climate with hot, humid summers, severe monsoons, and mild winters. Along with the west coast of India, this region has some of the Indian subcontinent's last remaining rainforests, which support diverse flora and fauna and several crop species. Reserves of petroleum and natural gas in the region are estimated to constitute a fifth of India's total potential. The region is covered by the mighty Brahmaputra-Barak river systems and their tributaries. Geographically, apart from the Brahmaputra, Barak and Imphal valleys and some flatlands in between the hills of Meghalaya and Tripura, the remaining two-thirds of the area is hilly terrain interspersed with valleys and plains; the altitude varies from almost sea-level to over above MSL. The region's high rainfall, averaging around and above creates problems of the ecosystem, high seismic activity, and floods. The states of Arunachal Pradesh and Sikkim have a montane climate with cold, snowy winters and mild summers.

Kangchenjunga, the third highest mountain peak in the world rising to an altitude of , lies in-between the state Sikkim and adjacent country Nepal.

Tributaries of the Brahmaputra River in Northeast India:

Northeast India has a subtropical climate that is influenced by its relief and influences from the southwest and northeast monsoons. The Himalayas to the north, the Meghalaya plateau to the south and the hills of Nagaland, Mizoram and Manipur to the east influences the climate. Since monsoon winds originating from the Bay of Bengal move northeast, these mountains force the moist winds upwards, causing them to cool adiabatically and condense into clouds, releasing heavy precipitation on these slopes. It is the rainiest region in the country, with many places receiving an average annual precipitation of , which is mostly concentrated in summer during the monsoon season. Cherrapunji, located on the Meghalaya plateau is one of the rainiest place in the world with an annual precipitation of . Temperatures are moderate in the Brahmaputra and Barak valley river plains which decreases with altitude in the hilly areas. At the highest altitudes, there is permanent snow cover. In general, the region has 3 seasons: Winter, Summer, and rainy season in which the rainy season coincides with the summer months much like the rest of India. Winter is from early November until mid March while summer is from mid-April to mid-October. Under the Köppen climate classification, the region is divided into 3 broad types: A (tropical climates), C (warm temperate mesothermal climates), and D (snow microthermal climates). The tropical climates are located in parts of Manipur, Tripura, Mizoram, and the Cachar plains south of 25oN and are classified as tropical wet and dry (''Aw'').. Much of Assam, Nagaland, northern parts of Meghalaya and Manipur and parts of Arunachal Pradesh fall within the warm temperature mesothermal climates (type C) where the mean temperatures in coldest months are between . The entire Brahmaputra valley has a humid subtropical climate (''Cfa/Cwa'') with hot summers.