Kartikeya ( sa|कार्त्तिकेय, ), also known as Skanda, Kumara, Murugan, Mahasena, and Subrahmanya, is the Hindu god of war. He is a son of Parvati and Shiva, brother of Ganesha, and a god whose life story has many versions in Hinduism. An important deity in the Indian subcontinent since ancient times, Kartikeya is particularly popular and predominantly worshipped in South India, Sri Lanka and Malaysia as Murugan. Kartikeya is an ancient god, traceable to the Vedic era. Archaeological evidence from 1st-century CE and earlier, where he is found with Hindu god Agni (fire), suggest that he was a significant deity in early Hinduism. He is found in many medieval temples all over India, such as at the Ellora Caves and Elephanta Caves. The iconography of Kartikeya varies significantly; he is typically represented as an ever-youthful man, riding or near an Indian Peacock, dressed with weapons sometimes with a rooster in the flag he holds. Most icons show him with one head, but some show him with six heads reflecting the legend surrounding his birth. He grows up quickly into a philosopher-warrior, destroys evil in the form of demon Taraka, teaches the pursuit of ethical life and the theology of Shaiva Siddhanta. He has inspired many poet-saints, such as Arunagirinathar. Kartikeya is found as a primary deity in temples wherever communities of the Tamil people live worldwide, particularly in Tamil Nadu state of India, Sri Lanka, Mauritius, Indonesia, Malaysia, Singapore, South Africa and Réunion. Three of the six richest and busiest temples in Tamil Nadu are dedicated to him. The Kataragama temple dedicated to him in Sri Lanka attracts Tamils, Sinhalese people and the Vedda people. He is also found in other parts of India, sometimes as Skanda, but in a secondary role along with Ganesha, Parvati and Shiva.

Kartikeya is known by numerous names in ancient and medieval texts of the Indian culture. Most common among these are Murugan, Kumara, Skanda, and Subrahmanya. Others include Aaiyyan, Cheyyon, Senthil, Vēlaṇ, Swaminatha ("ruler of the gods", from -natha ''king''), śaravaṇabhava ("born amongst the reeds"), Arumugam or ṣaṇmukha ("six-faced"), Dandapani ("wielder of the mace", from -pani ''hand''), Guha (cave, secret) or ''Guruguha'' (cave-teacher), Kadhirvelan, Kandhan, Vishakha and Mahasena. In ancient coins where the inscription has survived along with his images, his names appear as Kumara, Brahmanya or Brahmanyadeva. On some ancient Indo-Scythian coins, his names appear in Greek script as Skanda, Kumara and Vishaka. In ancient statues, he appears as Mahasena, Skanda and Vishakha. Skanda is derived from , which means "leaper or attacker". In Kalidasa’s epic poem Kumarasambhava (“The Birth of the War God”; 5th century CE), as in most versions of the story, the gods wished for Skanda to be born in order to destroy the demon Taraka, who had been granted a boon that he could be killed only by a son of Shiva. They sent Parvati to induce Shiva to marry her. Shiva, however, was lost in meditation and was not attracted to Parvati until he was struck by an arrow from the bow of Kama, the god of love, whom he immediately burned to ashes. After many years of abstinence, Shiva’s seed was so strong that the gods, fearing the result, sent Agni, the god of fire, to interrupt Shiva’s amorous play with Parvati. Agni received the seed and dropped it into the Ganges, where Skanda was born. Kartikeya means "of the Krittikas". This epithet is also linked to his birth. After he appears on the banks of the River Ganges, he is seen by the six of the seven brightest stars cluster in the night sky called ''Krittikas'' in Hindu texts (called Pleiades in Greek texts). These six mothers all want to take care of him and nurse baby Kartikeya. Kartikeya ends the argument by growing five more heads to have a total of six heads so he can look at all six mothers, and let them each nurse one. The six Krittikas are Śiva, Sambhūti, Prīti, Sannati, Anasūya and Kṣamā.

There are ancient references which can be interpreted to be Kartikeya in the Vedic texts, in the works of Pāṇini (~500 BCE), in the Mahabhasya of Patanjali and in Kautilya's ''Arthashastra''. For example, the term ''Kumara'' appears in hymn 5,2 of the ''Rig Veda''. The ''Kumara'' of verse 5.2.1 can be interpreted as Skanda, or just any "boy". However, the rest of the verses depict the "boy" as bright-colored, hurling weapons and other motifs that later have been associated with Skanda. The difficulty with interpreting these to be Skanda is that Indra, Agni and Rudra are also depicted in similar terms and as warriors. The Skanda-like motifs found in ''Rig Veda'' are found in other Vedic texts, such as section 6.1-3 of the ''Shatapatha Brahmana''. In these, the mythology is very different for ''Kumara'', as Agni is described to be the ''Kumara'' whose mother is Ushas (goddess Dawn) and whose father is Purusha. The section 10.1 of the ''Taittiriya Aranyaka'' mentions ''Sanmukha'' (six faced one), while the ''Baudhayana Dharmasutra'' mentions a householder's rite of passage that involves prayers to Skanda with his brother Ganapati (Ganesha) together. The chapter 7 of the ''Chandogya Upanishad'' (~800–600 BCE) equates Sanat-Kumara (eternal son) and Skanda, as he teaches sage Narada to discover his own Atman (soul, self) as a means to the ultimate knowledge, true peace and liberation. According to Fred Clothey, the evidence suggests that Kartikeya mythology had become widespread sometime around 200 BCE or after in north India. The first clear evidence of Kartikeya's importance emerges in the Hindu Epics such as the ''Ramayana'' and the ''Mahabharata'' where his story is recited. In addition to textual evidence, his importance is affirmed by the archeological, the epigraphical and the numismatic evidence of this period. For example, he is found in numismatic evidence linked to the Yaudheyas, a confederation of warriors in north India who are mentioned by ancient Pāṇini. They ruled an area consisting of modern era Haryana, Punjab, Rajasthan and Uttar Pradesh (extending into Garhwal region, Uttarakhand). They struck coins bearing the image of Skanda, and these coins are dated to be from before Kushan Empire era started. During the Kushan dynasty era, that included much of northwest Indian subcontinent, more coins featuring Kartikeya were minted. He is also found on ancient Indo-Scythian coins, where his various names are minted in Greek script.

Kartikeya was revered in major cultural centers of ancient India. For example, he was a major god for the Ikshvakus, an Andhra dynasty, as well as for the Gupta Empire. In south India, eight of the early Pallava dynasty rulers (300-550 CE) were named after Skanda or Kumara, suggesting the significance of Kartikeya by then. Kalidasa's epic poem the ''Kumārasambhava'' features Kartikeya.

The ''Tolkāppiyam'', one of the most ancient texts of the Tamil literature, mentions ''cēyōṉ'' "the red one", who is identified with Murugan, whose name is literally ''Murukaṉ'' "the youth"; the other gods referred to in the ''Tolkāppiyam'' are ''Māyōṉ'' "the dark one" (identified with Vishnu), ''Vēntaṉ'' "the sovereign" (identified with Indra) and ''Korravai'' "the victorious" (identified with Kali) and ''Varunan'' "the sea god". Extant Sangam literature works, dated between the third century BCE and the fifth century CE glorified Murugan, "the red god seated on the blue peacock, who is ever young and resplendent," as "the favoured god of the Tamils." Korravai is often identified as the mother of Murugan. In the ''Tirumurukāṟtruuppaṭai'', he is called ''Muruku'' and described as a god of beauty and youth, with phrases such as "his body glows like the sun rising from the emerald sea". It describes him with six faces each with a function, twelve arms, his victory over evil, and the temples dedicated to him in the hilly regions.

Kartikeya is mentioned in Shaiva Puranas. Of these, the ''Skanda Purana'' is the largest ''Mahāpurāṇa'', a genre of eighteen Hindu religious texts. The text contains over 81,000 verses, and is part of Shaivite literature, titled after Skanda, a son of Shiva and Parvati, who is also known as Kartikeya and Murugan. While the text is named after Skanda, he does not feature either more or less prominently in this text than in other Shiva-related Puranas. The text has been an important historical record and influence on the Hindu traditions related to war-god Skanda. The earliest text titled ''Skanda Purana'' likely existed by the 6th-century CE, but the ''Skanda Purana'' that has survived into the modern era exists in many versions.

The earliest mention of this deity in Buddhist texts may be found in the Janavasabha Sutta of the Pali Canon, where he is referred to as Sanankumāra. Here he is introduced as a deva of the rank of Mahābrahmā and a disciple of the Buddha. The Chinese translation of the Dīrgha Āgama features the same deity with the title Brahmāananumāra (梵童子). He is described as a manifestation of Mahābrahmārāja. He has five hair coils (頭五角髻), a handsome face (顏貌端正) and emanates purple-golden light (紫金色) that surpasses the light of the other devas. 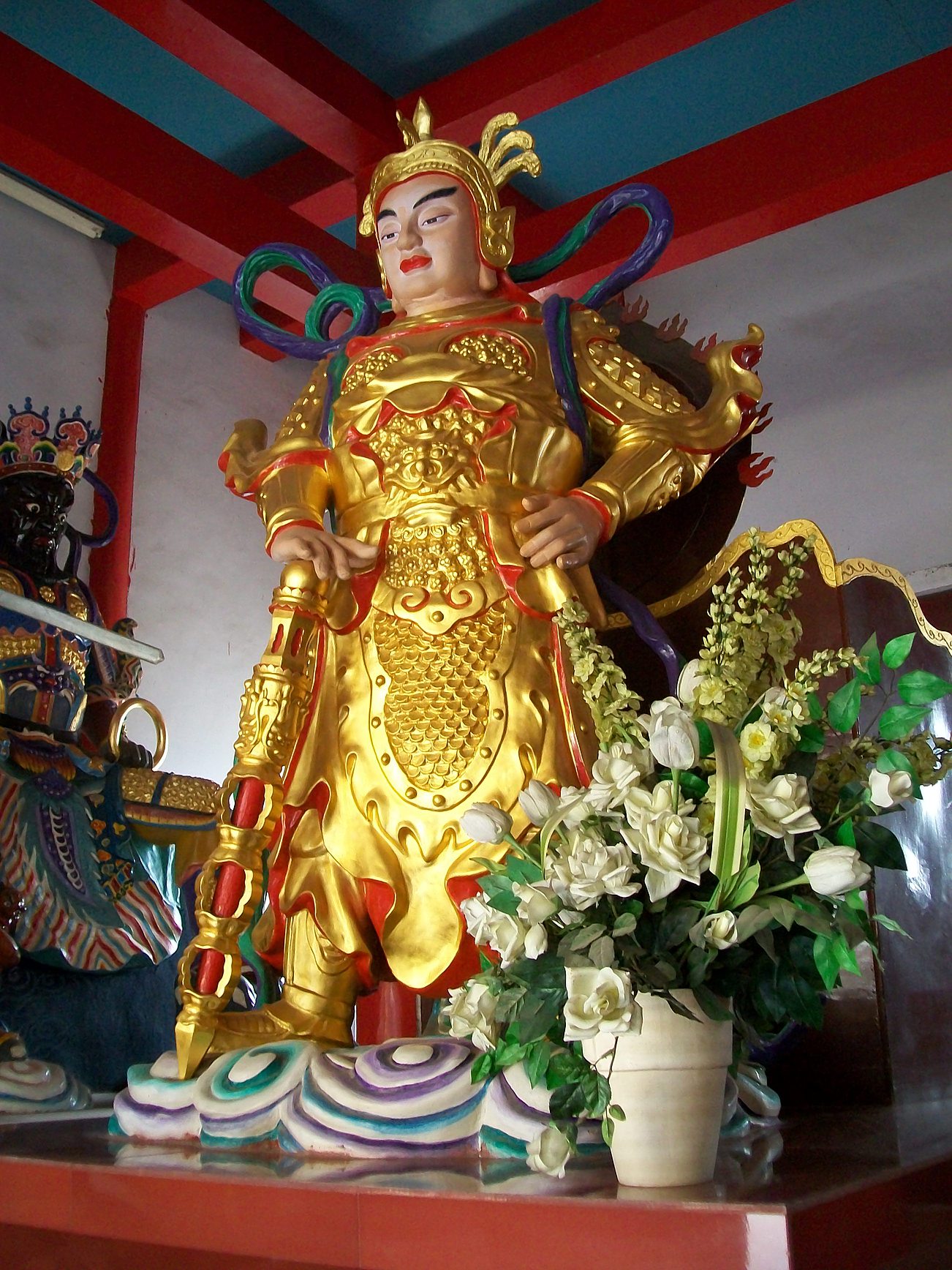 According to Richard Gombrich, Skanda has been an important deity in Theravada Buddhism pantheon, in countries such as Sri Lanka and Thailand. The ''Nikaya Samgraha'' describes Skanda Kumara as a guardian deity of the land, along with Upulvan (Vishnu), Saman and Vibhisana. Similarly, the 16th-century Siamese text ''Jinakalamali'' mentions him as a guardian god. There are Buddhist Sinhala shrines such as at Kataragama dedicated to Skanda which have historically been officiated by Hindu priests, which attracted Buddhist devotees and enjoyed royal support. Since the 1950s, states Brian Morris, the Kataragama shrine of Skanda has attracted over half a million devotional pilgrims every year, most being Buddhists.

The Mahāparinirvāṇa Sūtra mentions Kumāra as one of the eighty gods (八十神) worshiped by the common people. The ''Ārya Kaṇikrodhavajrakumārabodhisattava Sādhanāvidhi Sūtra'' (聖迦抳忿怒金剛童子菩薩成就儀軌經) (T 1796) features a section for the recitation of a mantra dedicated to the deity, where he is also paired with Iśvara. Yi Xing's Commentary of the Mahāvairocana Tantra (大毘盧遮那成佛經疏) clarifies that Kumāra is the son of Iśvara.

In Sri Lanka, the god Kataragama deviyo is a popular object of devotion among both Tamil Hindus and Sinhalese Buddhists. While many regard him as a bodhisattva, he is also associated with sensuality and retribution. Anthropologist Gananath Obeyesekere has suggested that the deity's popularity among Buddhists is due to his power to grant emotional gratification, which is in stark contrast to sensual restraint that characterizes Buddhist practice in Sri Lanka.

In Chinese Buddhism, Skanda (also sometimes known as Kumāra (鳩摩羅天)) has been portrayed as Weituo (韋陀 or 韋馱), a young heavenly general, the guardian deity of local monasteries and the protector of Buddhist dhamma. According to Henrik Sørensen, this representation became common after the Tang period, and became well established in the late Song period. Skanda was also adopted by Korean Buddhism, and he appears in its woodblock prints and paintings.