thumb|262px|A gong collection in a gamelan ensemble of instruments – Indonesian Embassy [[Canberra ]] A gong is an East and Southeast Asian musical percussion instrument that takes the form of a flat, circular metal disc which is hit with a mallet. The origin of gongs is probably China's Western Regions in the sixth century. The term ''gong'' ( jv|ꦒꦺꦴꦁ) originated in the Indonesian island of Java. Scientific and archaeological research has established that Burma, China, Java (Indonesia) and Annam were the four main gong manufacturing centres of the ancient world. The gong found its way into the Western World in the 18th century when it was also used in the percussion section of a Western-style symphony orchestra. A form of bronze cauldron gong known as a resting bell was widely used in ancient Greece and Rome, for instance in the famous Oracle of Dodona, where disc gongs were also used. Gongs broadly fall into one of three types: Suspended gongs are more or less flat, circular discs of metal suspended vertically by means of a cord passed through holes near to the top rim. Bossed or nipple gongs have a raised centre boss, or knob, and are often suspended and played horizontally. Bowl gongs are bowl-shaped and rest on cushions. The latter may be considered a member of the bell category. Gongs are made mainly from bronze or brass but there are many other alloys in use. Gongs produce two distinct types of sound. A gong with a substantially flat surface vibrates in multiple modes, giving a "crash" rather than a tuned note. This category of gong is sometimes called a tam-tam to distinguish it from the bossed gongs that give a tuned note. In Indonesian gamelan ensembles, some bossed gongs are deliberately made to generate in addition a beat note in the range from about 1 to 5 Hz. The use of the term "gong" for both these types of instrument is common.

Suspended gongs are played with hammers and are of two main types: flat faced discs either with or without a turned edge, and gongs with a raised centre boss. In general, the larger the gong, the larger and softer the hammer. In Western symphonic music, the flat faced gongs are generally referred to as tam-tams to distinguish them from their bossed counterparts. Here, the term "gong" is reserved for the bossed type only. The gong has been a Chinese instrument for millennia. Its first use may have been to signal peasant workers in from the fields, because some gongs are loud enough to be heard from up to away. In Japan, they are traditionally used to start the beginning of sumo wrestling contests. Large flat gongs may be 'primed' by lightly hitting them before the main stroke, greatly enhancing the sound and causing the instrument to "speak" sooner, with a shorter delay for the sound to "bloom". Keeping this priming stroke inaudible calls for a great deal of skill. The smallest suspended gongs are played with bamboo sticks or even western-style drumsticks. Contemporary and avant-garde music, where different sounds are sought, will often use friction mallets (producing squeals and harmonics), bass bows (producing long tones and high overtones), and various striking implements (wood/plastic/metal) to produce the desired tones. Rock gongs are large stones struck with smaller stones to create a metallic resonating sound. 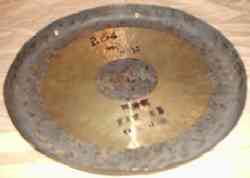 By far the most familiar to most Westerners is the ''chau gong'' or ''bullseye gong''. Large chau gongs, called ''tam-tams'' have become part of the symphony orchestra. Sometimes a chau gong is referred to as a ''Chinese gong'', but in fact, it is only one of many types of suspended gongs that are associated with China. A chau gong is made of copper-based alloy, bronze, or brass. It is almost flat except for the rim, which is turned up to make a shallow cylinder. On a gong, for example, the rim extends about perpendicular to the surface. The main surface is slightly concave when viewed from the direction to which the rim is turned. The centre spot and rim of a chau gong are left coated on both sides with the black copper oxide that forms during manufacture; the rest is polished to remove this coating. Chau gongs range in size from in diameter. The earliest Chau gong is from a tomb discovered at the Guixian site in the Guangxi Zhuang Autonomous Region of China. It dates from the early Western Han Dynasty. Gongs are depicted in Chinese visual art as of the 6th Century CE, and were known for their very intense and spiritual drumming in rituals and tribal meetings. Traditionally, chau gongs were used to clear the way for important officials and processions, much like a police siren today. Sometimes the number of strokes was used to indicate the seniority of the official. In this way, two officials meeting unexpectedly on the road would know before the meeting which of them should bow down before the other.


Use of gongs in symphony orchestras

The tam-tam was first introduced as an orchestral instrument by François-Joseph Gossec in 1790, and it was also taken up by Gaspare Spontini and Jean-François Le Sueur. Hector Berlioz deployed the instrument throughout his compositional career, and in his ''Treatise on Instrumentation'' he recommended its use "for scenes of mourning or for the dramatic depiction of extreme horror."