thumb|Making of banana leaf plates which replace plastic as a waste solution The banana leaf is the leaf of the banana plant, which may produce up to 40 leaves in a growing cycle. The leaves have a wide range of applications because they are large, flexible, waterproof and decorative. They are used for cooking, wrapping, and food-serving in a wide range of cuisines in tropical and subtropical areas. They are used for decorative and symbolic purposes in numerous Hindu and Buddhist ceremonies. In traditional homebuilding in tropical areas, roofs and fences are made with dry banana-leaf thatch. Banana and palm leaves were historically the primary writing surfaces in many nations of South and Southeast Asia.

Banana leaves are large, flexible, and waterproof. They impart an aroma to food that is cooked in or served on them; steaming with banana leaves imparts a subtle sweet flavor and aroma to the dish. The leaves are not themselves eaten and are discarded after the contents are consumed. Besides adding flavor, the leaves keep juices in and protect food from burning, much as foil does. In Tamil Nadu (India) leaves are fully dried and used as packing material for foodstuffs, and are also made into cups to hold liquids. The dried leaves are called 'Vaazhai-ch- charugu' (வாழைச் சருகு) in Tamil. Some South Indian, Filipino and Khmer recipes use banana leaves as a wrapper for frying. The leaves are later removed. In Vietnamese cuisine, banana leaves are used to wrap foods such as ''cha-lua''. 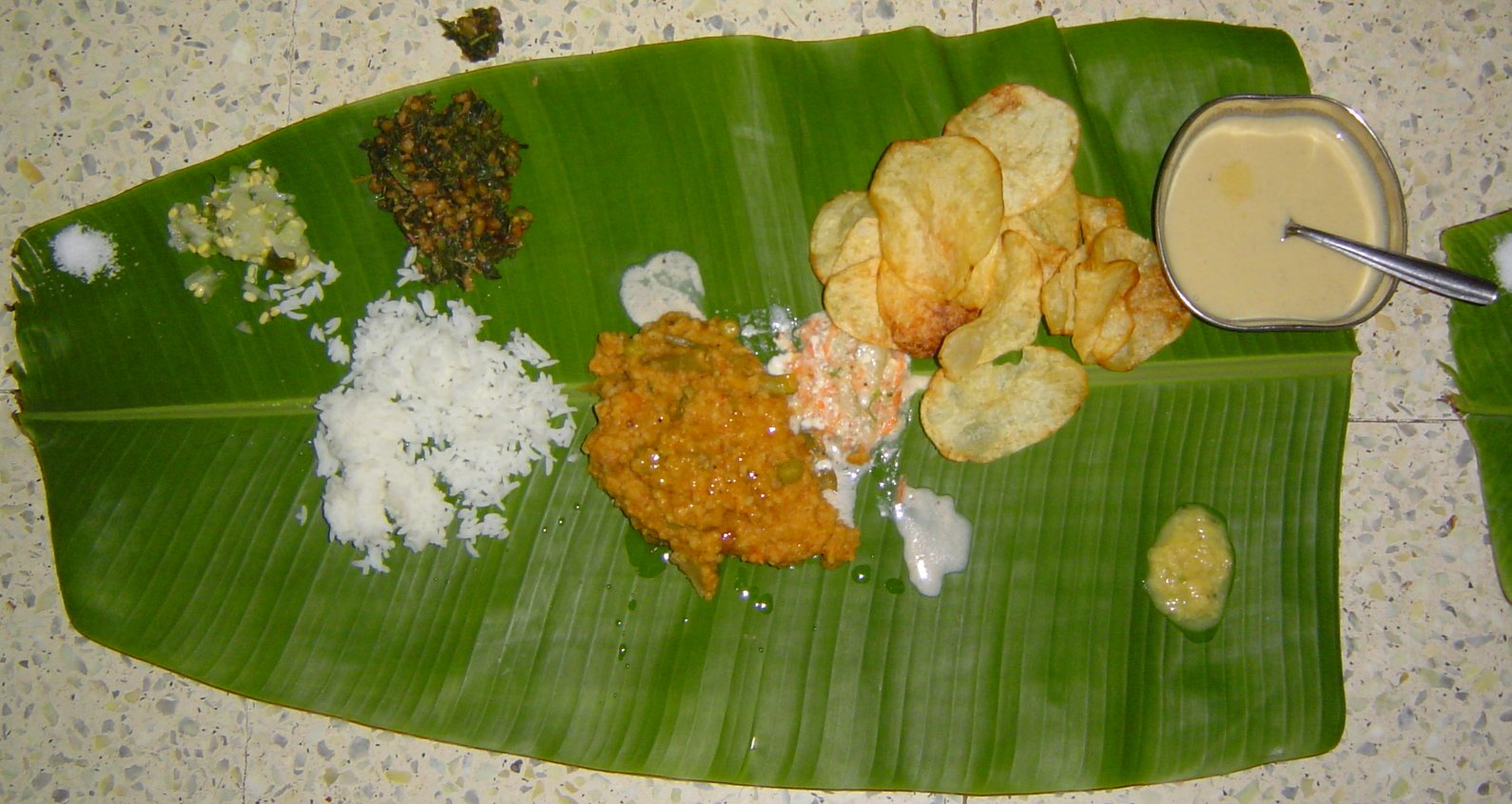 South Indian cuisine & Bengali cuisine is traditionally served on a banana leaf, especially in the states of Andhra Pradesh, Telangana, Tamil Nadu, Karnataka, Kerala, Odisha, West Bengal and also in the Northern and Eastern parts of Sri Lanka. In these regions, it is customary to serve food on a banana leaf during festive occasions, and banana is often a part of the food served. In Maharashtra, on special occasions like Ganesh chaturthi, people eat off banana leaves. The banana leaf is also used for wrapping fish, which can then be steamed. In Bengali cuisine, banana leaf is used to prepare Paturi, which is marinated and seasoned boneless fresh fish steamed and cooked inside a banana leaf and eaten on it. Commonly, Bhetki and Ilish are used in making Paturi. Bengali cuisine also have a great significance & sacred believe for having meal on a banana leaf. 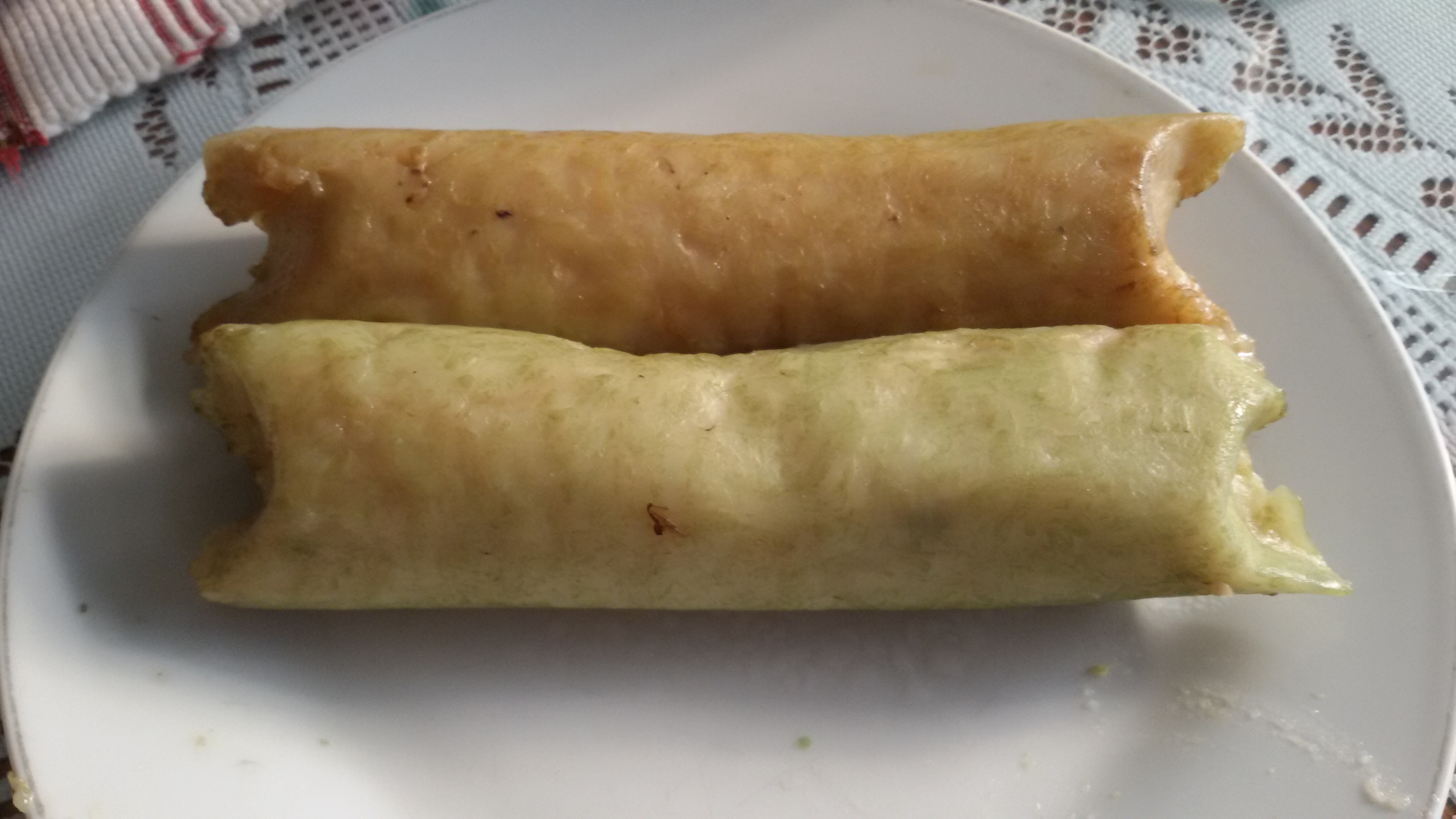 In Indonesian cuisine, banana leaf is employed in cooking methods called ''pepes'' and ''botok''; the banana-leaf packets of food are steamed, boiled, or grilled on charcoal. Banana leaves are also used to wrap several kinds of snacks ''kue'' (delicacies), such as ''nagasari'' or ''kue pisang'' and ''otak-otak'', and also to wrap pressed sticky-rice delicacies such as ''lemper'' and ''lontong''. In Java, banana leaf is also used as a shallow conical bowl called ''"pincuk"'', usually to serve ''rujak tumbuk, pecel'' or satay. The ''pincuk'' secured with ''lidi semat'' (small thorn-like pins made from the coconut-leaf midrib). The ''pincuk'' fit in the left palm, while the right hand is used to consume the food. It also functions as a traditional disposable take-away food container. The cleaned banana leaf is often used as a placemat; cut banana-leaf sheets placed on rattan, bamboo or clay plates are used to serve food. Decorated and folded banana leaves on woven bamboo plates are used as serving trays, ''tumpeng'' rice cones, and holders for ''jajan pasar'' or ''kue'' delicacies.

In Malaysian and Singaporean cuisine

Banana leaves are the traditional method of serving food in Philippine cuisine, with rice and other dishes laid out on large banana leaves (a ''salo-salo'', reminiscent of a buffet) and everyone partaking using their bare hands (''kamayan''). Another traditional method of serving food is by placing it on a banana-leaf liner placed over a woven ''bilao'' (a winnowing basket made of bamboo). The ''bilao'' is normally a farm implement used for removing chaff from grains, although there are now smaller woven trays or carved wooden plates of the same kind in Filipino restaurants used specifically for serving food. Banana leaves are also commonly used in wrapping food (''binalot''), and are valued for the aroma they impart to the food. Specific Philippine dishes that use banana leaves include ''suman'' and ''bibingka''.

The Hawaiian imu is often lined with banana leaves.

In Caribbean and Mexican cuisine 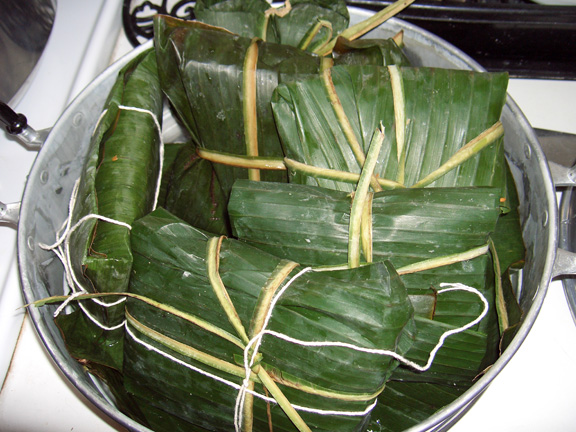 Vigorón' is a traditional Nicaraguan dish. It consists of a cabbage salad known as ''curtido'' (chopped cabbage, tomatoes, onions, and chile peppers marinated in vinegar and salt), boiled yuca, and chicharrones (fried pork with skin or with meat), wrapped in Banana leaf. Variations of this dish are also found in Costa Rica. Vaho (or Baho) is a mix of meat, green plantains and yuca cooked in banana leaves. 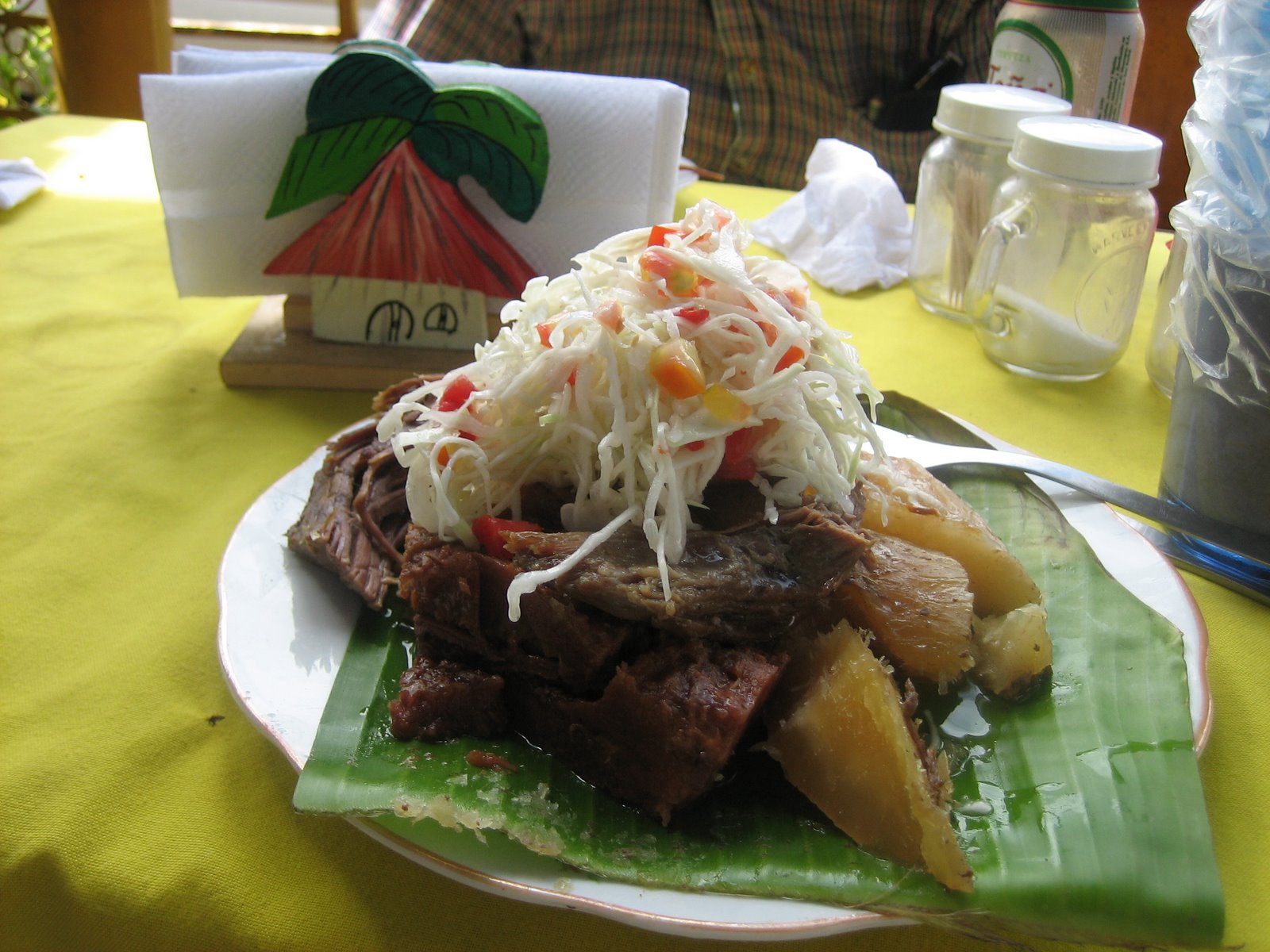 Tamales made throughout Central America are traditionally wrapped in banana leaves prior to cooking, which imparts a distinctive taste to the nixtamalized corn dough. Nacatamal is made up mostly of nixtamalized corn ''masa'' (a kind of dough traditionally made from a process called ''nizquezar'') and lard, but also includes seasonings such as salt and ''achiote'' (annatto). Filling consists of seasoned pork meat, rice, a slice of potato, bell pepper, tomato, onion, olives, cilantro and/or spearmint sprigs, and on occasion, though less commonly, capers, raisins or fresh chile (red or green), all wrapped in banana leaves. This dish is traditional to Nicaragua.

Banana leaves have also been proposed as a material out of which to make trays for airline meals, to reduce their environmental impact.

In tradition and religion 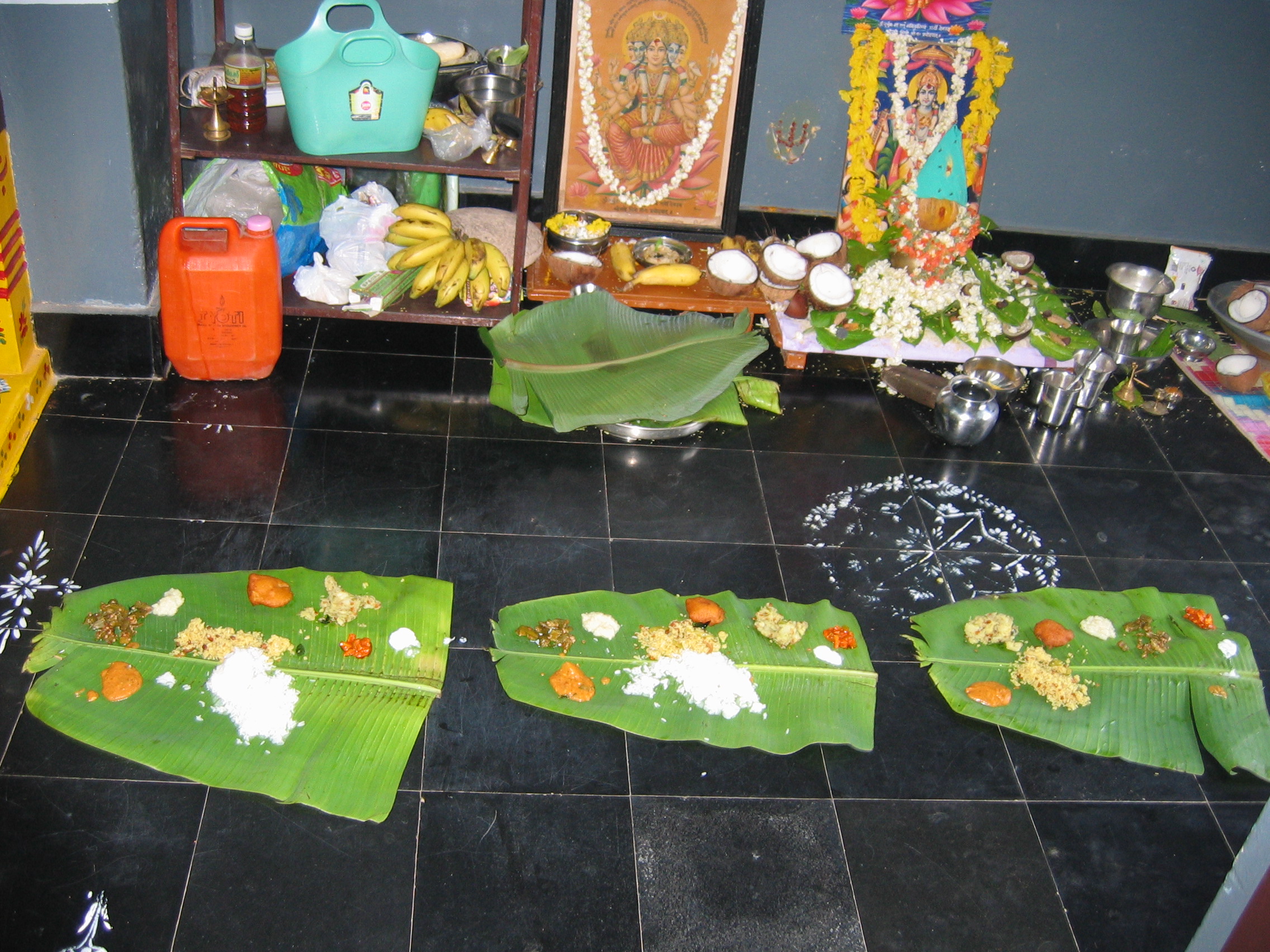 Banana leaves are used by Hindus and Buddhists as a decorative element for special functions, marriages, and ceremonies in southern India and Southeast Asia. Balinese Hindu prepared banana leaf as the container for floral offerings called ''canang'' dedicated for hyang (spirits or deities) and gods. These floral offerings were placed in various places around the house. In Upper Myanmar, the banana leaf is used in handcrafting an elaborate multi-tiered offertory known as phetsein kundaung (ဖက်စိမ်းကွမ်းတောင်). In Thailand, banana leaf is used to create an offering bowl called ''krathong'', it is an important element during traditional festival of ''Loy Krathong'' day. Thai people will celebrate this on the full-moon day of the twelfth lunar month. The celebration was meant to pay respect to the Mother of Water called ''Phra Mae Kong Kha'' by floating a ''krathong'' on a body of water. Other Asian countries also shares this similar festival such as; Myanmar, Laos, Cambodia, India and China. ''Krathong'' means lotus-shaped vessel like a leave bowl made of banana leaves and flowers with joss sticks and a candle in the middle. During Loy Krathong festival, people carry their ''krathongs'' to the river. After lighting candles and three joss sticks and making a wish, they will gently place their ''krathongs'' on the water and let them drift away. People believed that ''krathongs'' will carry their wickedness and bad luck away, and after that happiness will come to them. In fact, it is the time to be happy as the sufferings are floated away and a time to enjoy dancing, singing, or activities with other people. People use banana leaves to make ''krathongs'' because it is organic material, natural and would decompose easily.

As a writing surface

Banana and palm leaves were historically the primary writing surface in many nations of South and Southeast Asia. This has influenced the evolution of their scripts. The rounded letters of many of the scripts of southern India, Sri Lanka and Southeast Asia such as Oriya and Sinhala, Burmese, and Javanese, for example, are thought to have been influenced by this: Sharp angles and tracing straight lines along the vein of the leaf with a sharp writing implement would risk splitting the leaf and ruining the surface, so rounded letters, or letters with straight lines only in the vertical or diagonal direction, were required for practical daily use. In such situations, the ribs of the leaves function as the dividing lines of ruled paper, separating lines of text. It is believed that this was so influential in the development of the rongorongo script of Easter Island that the more elaborate wood tablets were fluted to imitate the surface of a banana leaf.