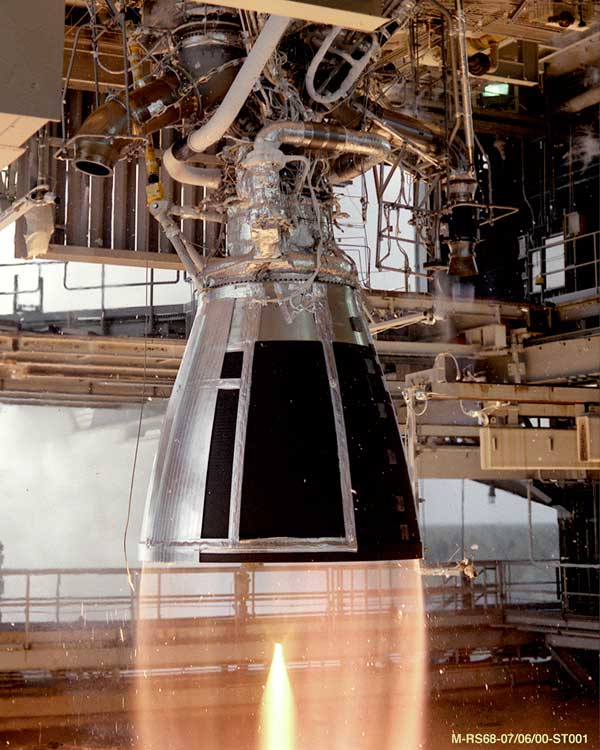 A rocket engine uses stored rocket propellants as the reaction mass for forming a high-speed propulsive jet of fluid, usually high-temperature gas. Rocket engines are reaction engines, producing thrust by ejecting mass rearward, in accordance with Newton's third law. Most rocket engines use the combustion of reactive chemicals to supply the necessary energy, but non-combusting forms such as cold gas thrusters and nuclear thermal rockets also exist. Vehicles propelled by rocket engines are commonly called rockets. Rocket vehicles carry their own oxidizer, unlike most combustion engines, so rocket engines can be used in a vacuum to propel spacecraft and ballistic missiles. Compared to other types of jet engines, rocket engines are the lightest and have the highest thrust, but are the least propellant-efficient (they have the lowest specific impulse). The ideal exhaust is hydrogen, the lightest of all elements, but chemical rockets produce a mix of heavier species, reducing the exhaust velocity. Rocket engines become more efficient at high speeds, due to the Oberth effect.

thumb|upright=1.25|A simplified diagram of a solid-fuel rocket.
1. A solid fuel-oxidizer mixture (propellant) is packed into the rocket, with a cylindrical hole in the middle.
2. An igniter combusts the surface of the propellant.
3. The cylindrical hole in the propellant acts as a combustion chamber.
4. The hot exhaust is choked at the throat, which, among other things, dictates the amount of thrust produced.
5. Exhaust exits the rocket.


Rocket engines produce thrust by the expulsion of an exhaust fluid that has been accelerated to high speed through a propelling nozzle. The fluid is usually a gas created by high pressure () combustion of solid or liquid propellants, consisting of fuel and oxidiser components, within a combustion chamber. As the gases expand through the nozzle, they are accelerated to very high (supersonic) speed, and the reaction to this pushes the engine in the opposite direction. Combustion is most frequently used for practical rockets, as high temperatures and pressures are desirable for the best performance. A model rocketry alternative to combustion is the water rocket, which uses water pressurized by compressed air, carbon dioxide, nitrogen, or any other readily available, inert gas.

Liquid-fuelled rockets force separate fuel and oxidiser components into the combustion chamber, where they mix and burn. Hybrid rocket engines use a combination of solid and liquid or gaseous propellants. Both liquid and hybrid rockets use ''injectors'' to introduce the propellant into the chamber. These are often an array of simple jets – holes through which the propellant escapes under pressure; but sometimes may be more complex spray nozzles. When two or more propellants are injected, the jets usually deliberately cause the propellants to collide as this breaks up the flow into smaller droplets that burn more easily.