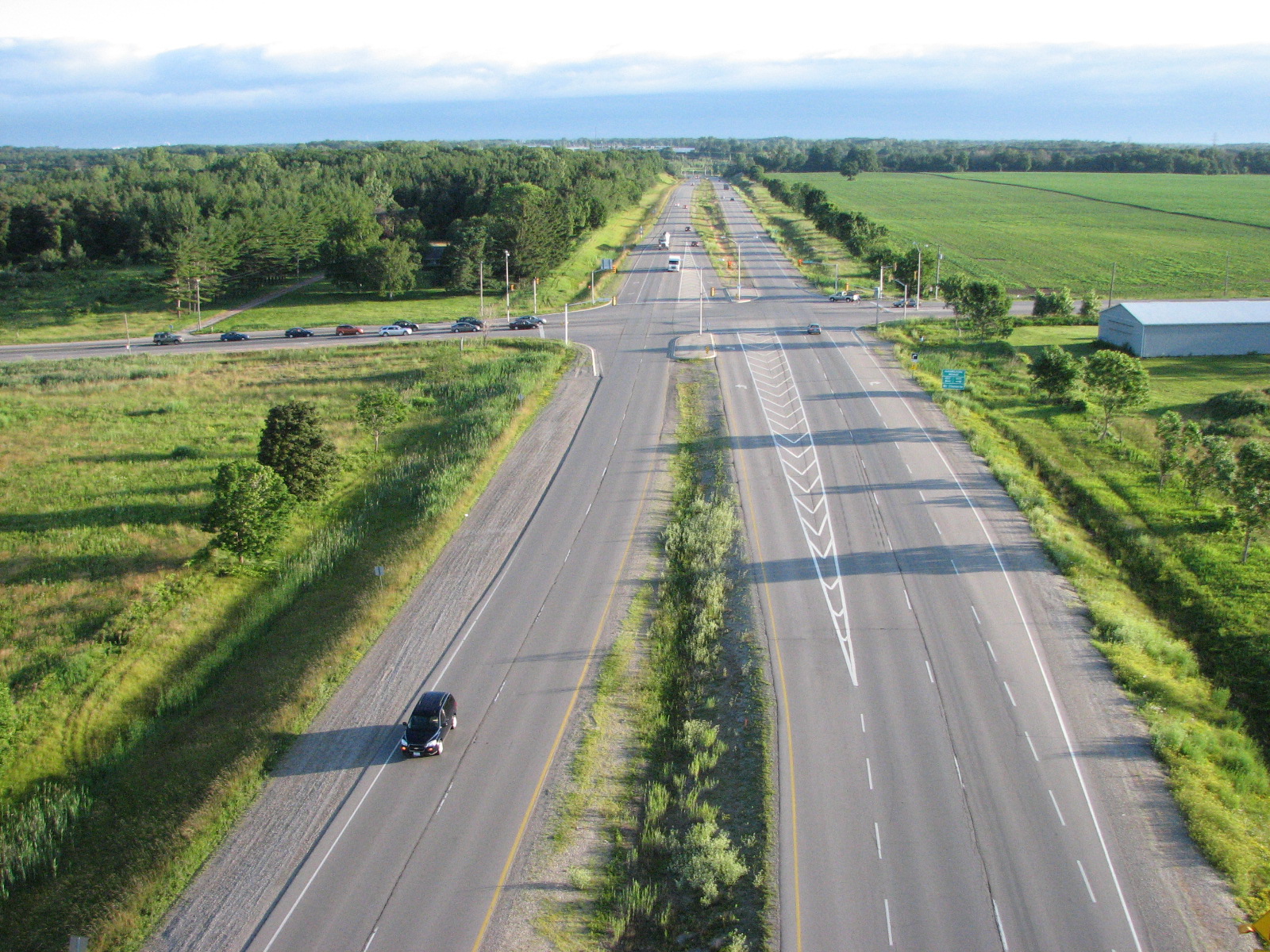 A limited-access road, known by various terms worldwide, including limited-access highway, dual-carriageway, expressway, and partial controlled access highway, is a highway or arterial road for high-speed traffic which has many or most characteristics of a controlled-access highway (freeway or motorway), including limited or no access to adjacent property, some degree of separation of opposing traffic flow, use of grade separated interchanges to some extent, prohibition of some modes of transport such as bicycles or horses, and very few or no intersecting cross-streets or level crossings. The degree of isolation from local traffic allowed varies between countries and regions. The precise definition of these terms varies by jurisdiction.

The first implementation of limited-access roadways in the United States was the Bronx River Parkway in New York, in 1907. The New York State Parkway System was constructed as a network of high-speed roads in and around New York City. The first limited access highway built is thought to be the privately built Long Island Motor Parkway in Long Island, New York. The Southern State Parkway opened in 1927, while the Long Island Motor Parkway was closed in 1937 and replaced by the Northern State Parkway (opened in 1931) and the contiguous Grand Central Parkway (opened in 1936).

The first Dutch bike freeway route opened in 2004 between Breda and Etten-Leur; many others have been added since then

In the United States, the national ''Manual on Uniform Traffic Control Devices'' (MUTCD) uses "full control of access" only for freeways. Expressways are defined as having "partial control of access" (or ''semi-controlled access''). This means that major roads typically use interchanges and commercial development is accessed via cross roads or frontage roads, while minor roads can cross at grade and farms can have direct access. This definition is also used by some states, some of which also restrict freeways only to motor vehicles capable of maintaining a certain speed. Some other states use "controlled access" to mean a higher standard than "limited access", while others reverse the two terms.

The Expressway Network of the People's Republic of China is the longest highway system in the world. The network is also known as National Trunk Highway System (NTHS). By the end of 2016, the total length of China's expressway network reached 131,000 kilometers (82,000 mi). Expressways in China are a fairly recent addition to a complex network of roads. China's first expressway was built in 1988. Until 1993, very few expressways existed. The network is expanding rapidly after 2000. In 2011, 11,000 kilometres (6,800 mi) of expressways were added to the network.

The Expressways of Pakistan are a network of multiple-lane, high-speed highways in Pakistan, which are owned, maintained and operated federally by Pakistan's National Highway Authority. They are one class lower than the country's motorways and are usually upgraded versions of the national highways. The total length of Pakistan's expressways is as of November, 2016. Around of expressways are currently under construction in different parts of country. Most of these expressways will be complete between 2017 and 2020.

as seen from Khandala Expressways in India make up more than of the Indian National Highway System on which they are the highest class of road. The National Highways Development Project is underway to add an additional of expressways to the network by the year 2022.

The term ''Expressway'' as used in English in Japan refers to both freeway-style highways and narrower, more winding, often undivided ''Regional High-Standard Highways'' . Both types of expressways have a combined length of as of April 2012.

Limited-access roads in Malaysia usually, but not always, take the name ( ms|lebuhraya|region=MY – this is also the name for expressways). Highways normally have a lower speed limit than expressways (but still higher than the rest of the local road network), and permit at-grade intersections and junctions to residential roads and shopfronts, although grade separation is still typical. Highways are normally toll-free and are owned and operated by the federal government. Notable examples of limited-access roads are the Federal Highway, Skudai Highway, Gelugor Highway, Kuantan Bypass and Kuching Bypass.

Limited-access roads in Singapore are formally known as (in contrast to controlled-access highways which are known as ''expressways''). While still functioning as high-speed roads, semi-expressways may still have at-grade intersections with traffic lights, and speed limits are not uniform. Grade separation is, however, still typical at major junctions. Five roads have been designated as semi-expressways: Bukit Timah Road, Jurong Island Highway, Nicoll Highway, Outer Ring Road System and West Coast Highway.

Motorways in South Korea (자동차전용도로 ''Jadongcha jeonyong doro'', literally 'motor-car-only road') includes various grades of highways other than expressways. Contrary to the expressway in South Korea, motorway is a measure of traffic control, rather than a class of the road. For example, ''Jayu-ro'' is a segment of the national route 77 as well as a motorway. As of June 2011, 1,610 km of highways in total were designated as motorways. (1,052 km national highways, 351 km metropolitan highways, 185 km regional highways and 20 km municipal highways) Like expressways, motorcycles are not permitted.

left|70px 70px Expressways in Taiwan may be controlled-access highways similar to National Freeways or limited-access roads. Most have Provincial (as opposed to National) Highway status, although some are built and maintained by cities. All provincial expressways run east–west except for Provincial Highway No. 61, which runs north–south along the west coast. Some provincial expressway routes are still under construction.

In Austria the speed limit on a ''Schnellstraße'' is . ''Schnellstraßen'' are very similar to Austrian ''Autobahnen'' (freeways/motorways); the chief difference is that they are more cheaply built with smaller curve radius, often undivided and have fewer bridges and tunnels.