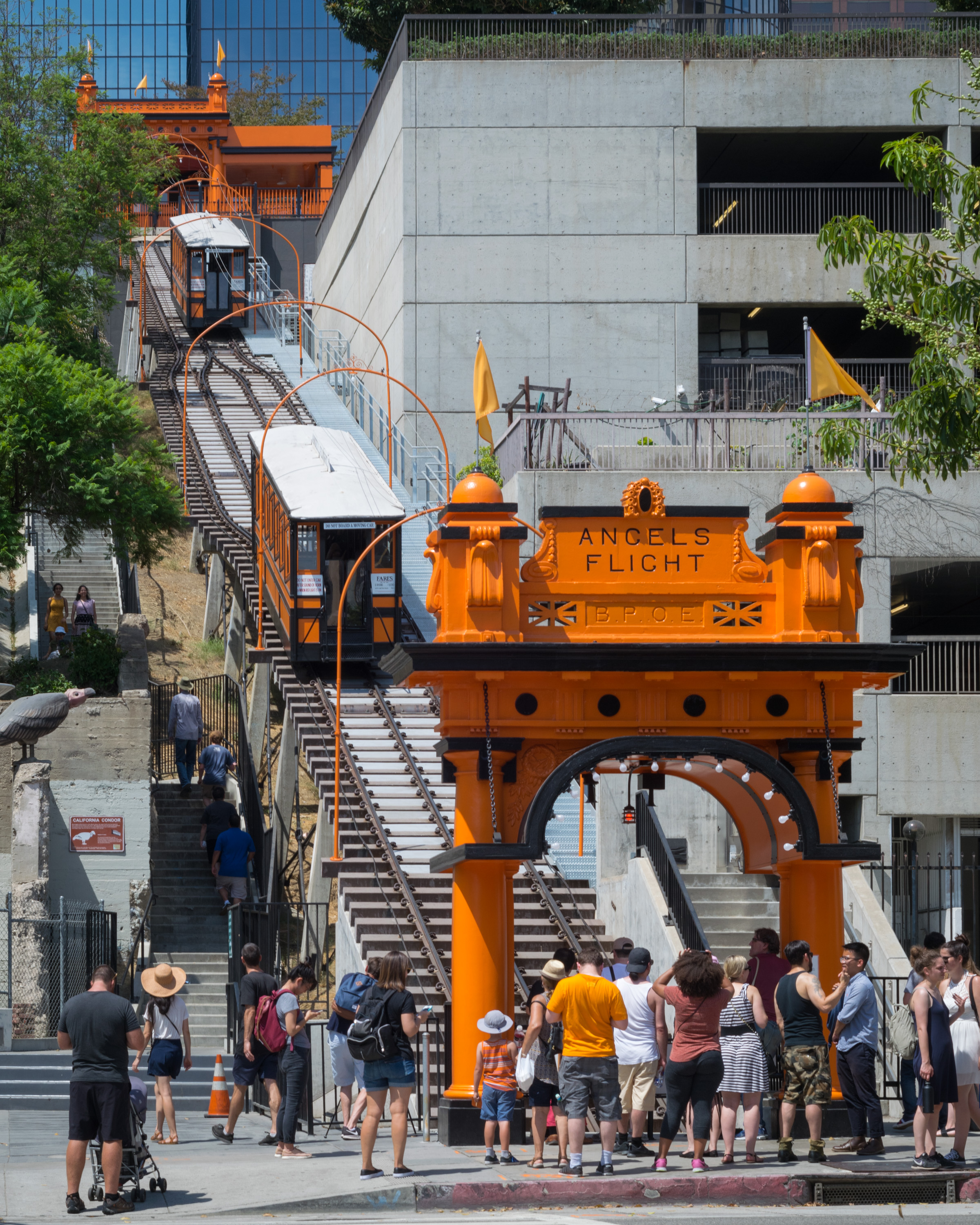 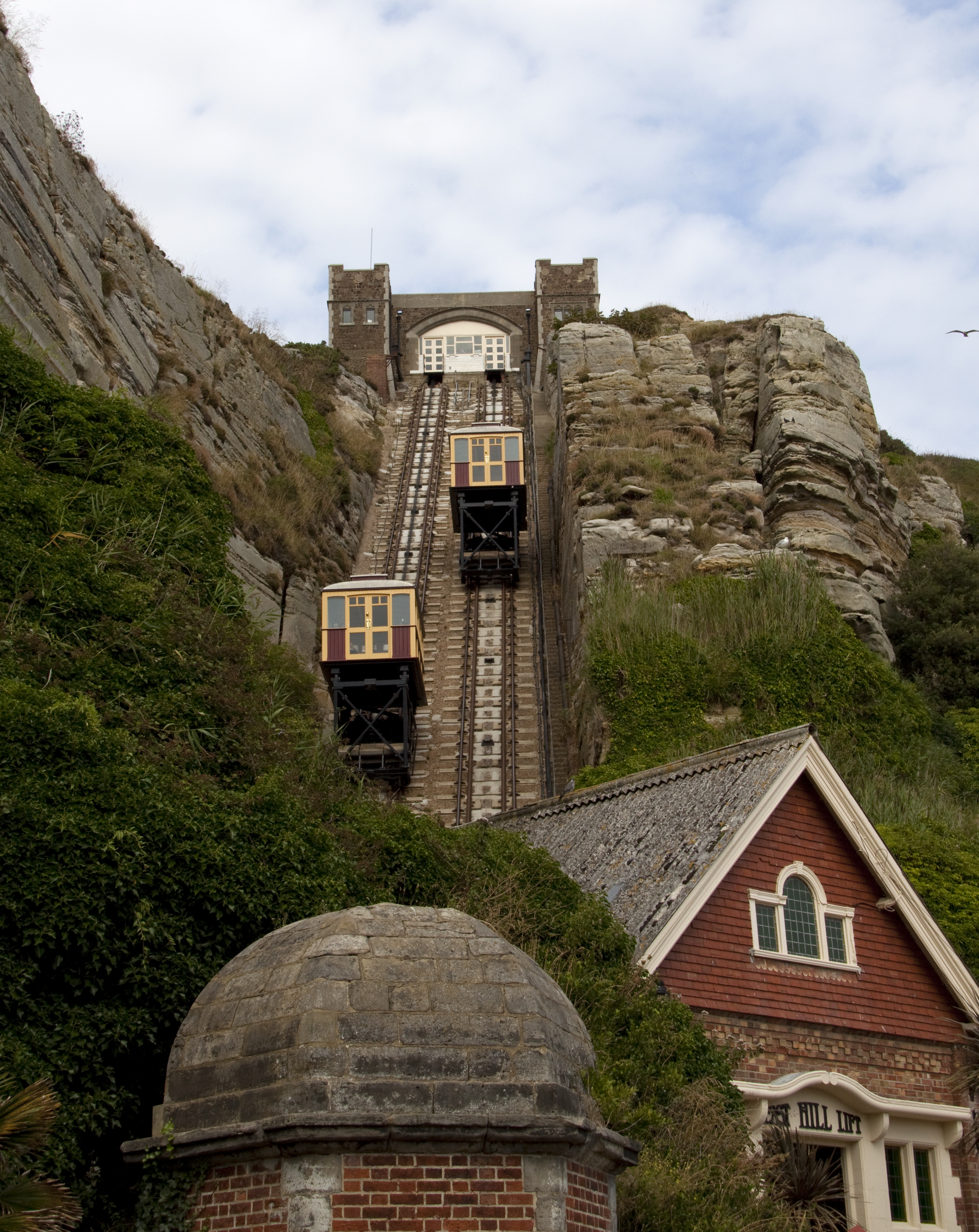 A funicular (, , ) is a transportation system that uses cable-driven cars to connect points along a steep incline. By definition, a funicular uses two counterbalanced passenger cars attached to opposite ends of the same cable, which is looped over a pulley at the upper end of a track. A funicular's two cars move in concert: as one ascends, the other descends simultaneously, an arrangement that distinguishes a funicular from other cable-guided transportation systems—e.g., a single-car inclined elevator. The term ''funicular'' derives from the Latin word , the diminutive of , meaning 'rope'. Numerous systems, e.g., the Montmartre Funicular in Paris, are still called funiculars, though they nolonger meet the definition of a funicular. 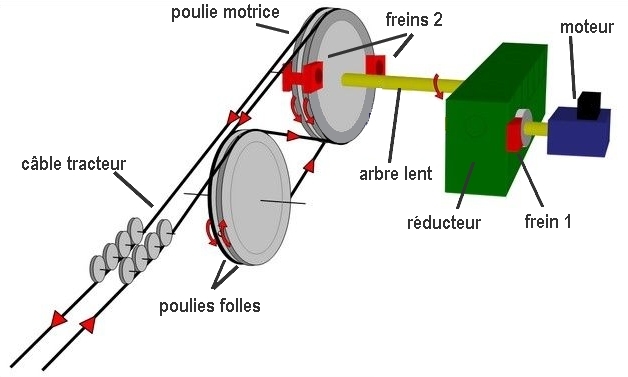 In a funicular both cars (or trains) are permanently connected to the opposite ends of the same cable, known as a ''haul rope''. At the engine room at the upper end of the track, the haul rope runs through a system of pulleys. Sheaves—unpowered pulleys allowing the cable to change direction—guide the cable along the track and to and from the drive pulley. The rope pulls one car upwards while the other car descends the slope at the other end of the rope. Except for the weight of passengers, the weight of the two cars is counterbalanced, so the engine only has to lift the excess passengers and supply the energy lost to friction. 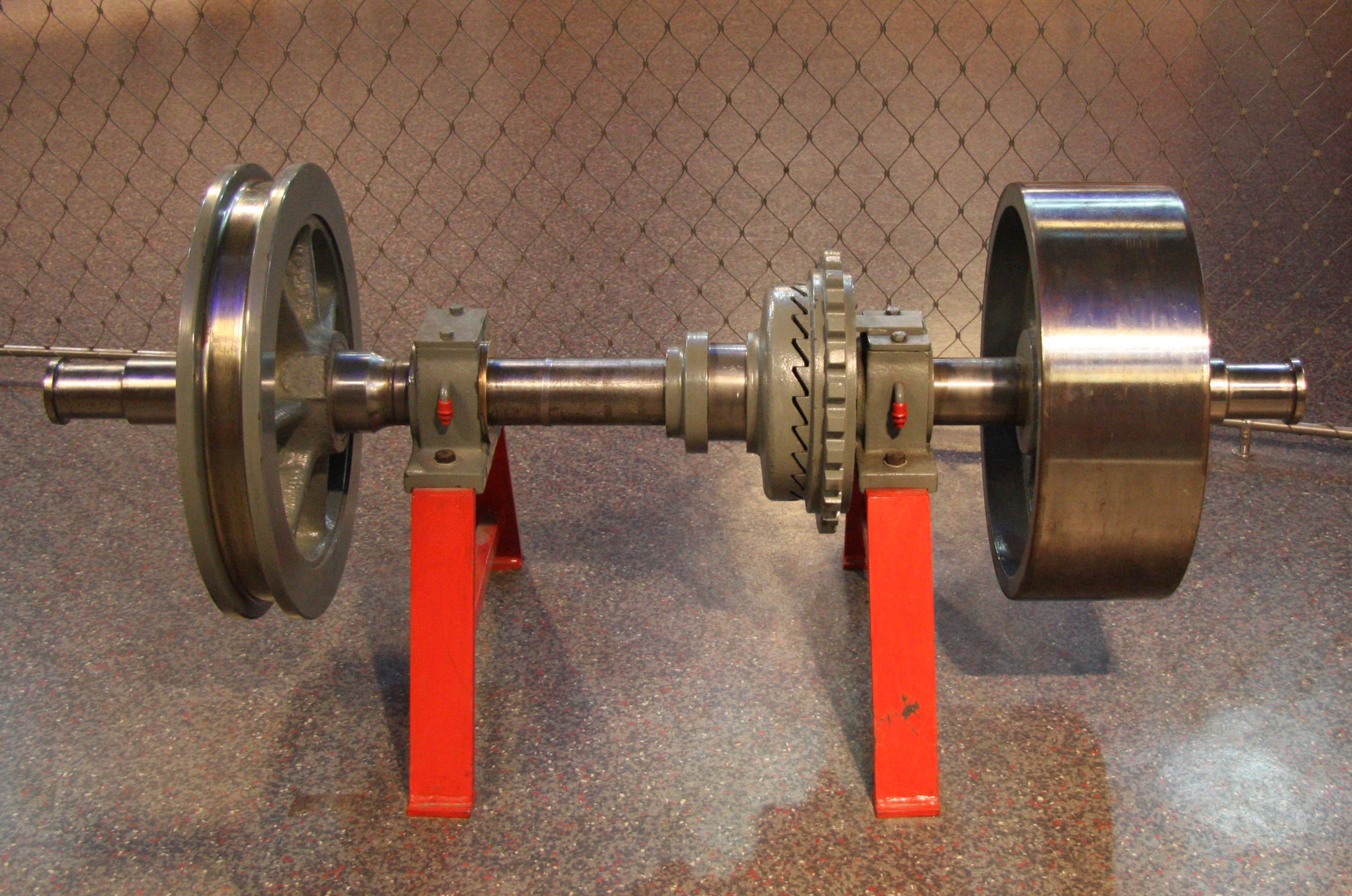 The Swiss engineer Carl Roman Abt invented the method that allows cars to be used with a two-rail configuration. The cars, in this case, have their wheelsets of a rather unconventional design: the outboard wheel has flanges on both sides whereas the inboard wheel is unflanged. One car has its dual-flanged wheels on the left side, so it follows the leftmost rail; the other car has it on the right side, and it follows the rightmost rail. Thus the ''left'' car always goes through the left branch of the passing loop and the ''right'' car through its right branch. The car's unflanged wheels are considerably wider than their opposites, allowing them to roll over the turnouts easily from one rail to another and above the cables. This system has no moving parts for switches and crossings, and compared with the other options it has proven to be quite reliable and cost-effective. It was first implemented by Abt in 1886 on the Lugano Città–Stazione funicular (Switzerland). Since then the two-rail system with the Abt turnout have increased in popularity, so as to become a standard for modern funiculars. 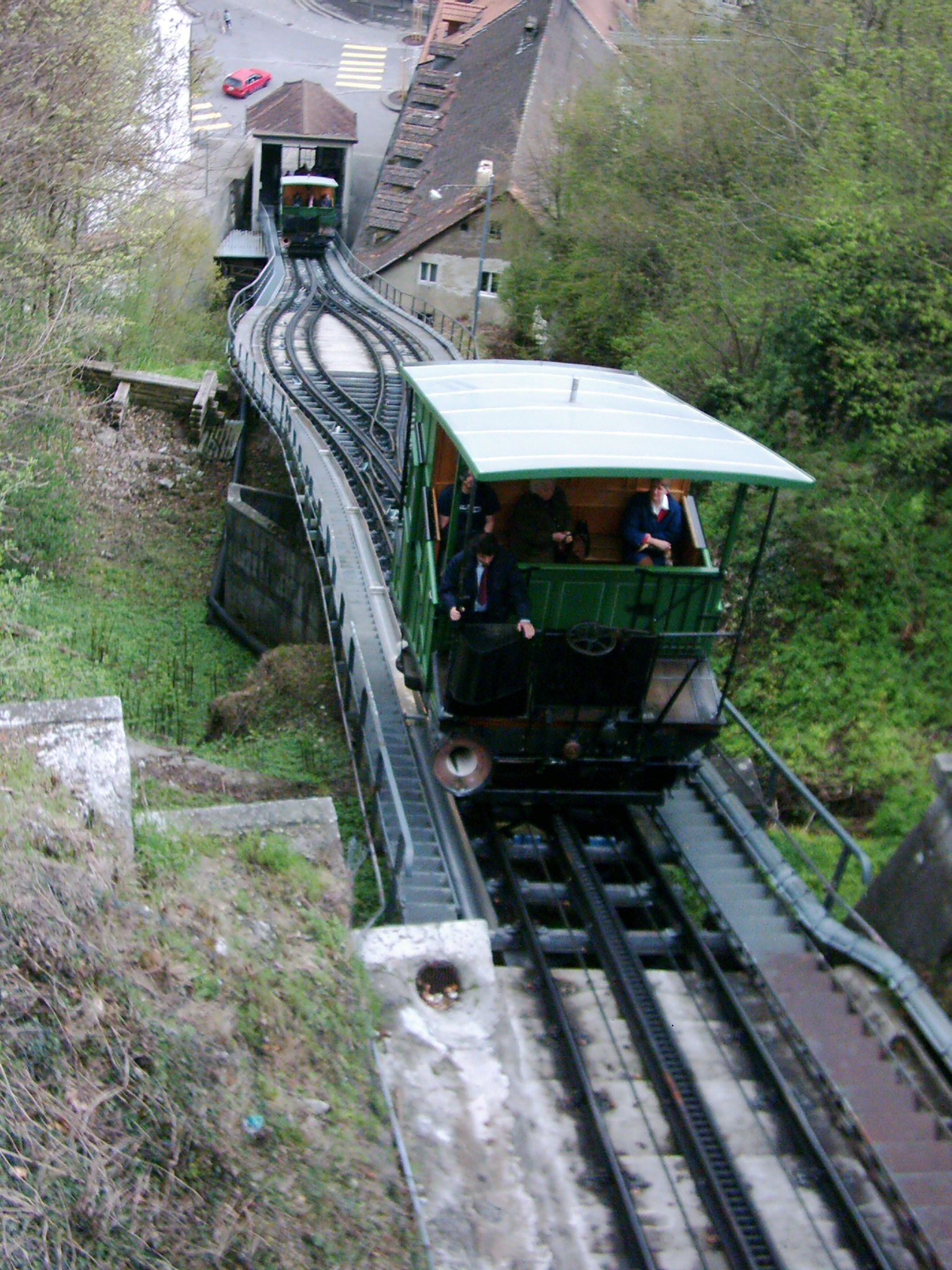 A few funiculars have been built using water tanks under the floor of each car that are filled or emptied until just sufficient imbalance is achieved to allow movement. The car at the top of the hill is loaded with water until it is heavier than the car at the bottom, causing it to descend the hill and pull up the other car. The water is drained at the bottom, and the process repeats with the cars exchanging roles. The movement is controlled by a brakeman using the brake handle of the rack and pinion system engaged with the rack mounted between the rails. The Bom Jesus funicular built in 1882 near Braga, Portugal is one of the extant systems of this type. Another example, the in Fribourg, Switzerland, is of particular interest as it utilizes waste water, coming from a sewage plant at the upper part of the city. Some funiculars of this type were later converted to electrical power. For example, the Giessbachbahn in the Swiss canton of Berne, opened in 1879, was originally powered by water ballast. In 1912 its energy provision was replaced by a hydraulic engine powered by a Pelton turbine. In 1948 this in turn was replaced by an electric motor. 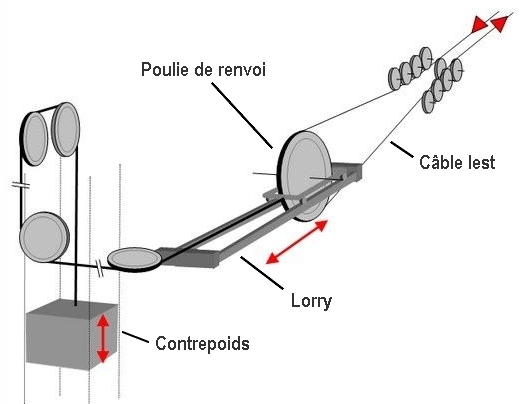 The cars can be attached to a second cable running through a pulley at the bottom of the incline in case the gravity force acting on the vehicles is too low to operate them on the slope. One of the pulleys must be designed as a tensioning wheel to avoid slack in the ropes. In this case, the winching can also be done at the lower end of the incline. This practice is used for funiculars with slopes below 6%, funiculars using sledges instead of cars, or any other case where it is not ensured that the descending car is always able to pull out the cable from the pulley in the station on the top of the incline. Another reason for a bottom cable is that the cable supporting the lower car at the extent of its travel will potentially weigh several tons, whereas that supporting the upper car weighs virtually nothing. The lower cable adds an equal amount of cable weight to the upper car while deducting the same weight from the lower, thereby keeping the cars in equilibrium.

A number of cable railway systems which pull their cars on inclined slopes were built since the 1820s. In the second half of the 19th century the design of a funicular as a transit system emerged. It was especially attractive in comparison with the other systems of the time as counterbalancing of the cars was deemed to be a cost-cutting solution. The first line of the Funiculars of Lyon () opened in 1862, followed by other lines in 1878, 1891 and 1900. The Budapest Castle Hill Funicular was built in 1868–69, with the first test run on 23 October 1869. The oldest funicular railway operating in Britain dates from 1875 and is in Scarborough, North Yorkshire. In Istanbul, Turkey, the Tünel has been in continuous operation since 1875 and is both the first underground funicular and the second-oldest underground railway. It remained powered by a steam engine up until it was taken for renovation in 1968. Until the end of the 1870s, the four-rail parallel-track funicular was the normal configuration. Carl Roman Abt developed the Abt Switch allowing the two-rail layout, which was used for the first time in 1879 when the Giessbach Funicular opened in Switzerland. In the United States, the first funicular to use a two-rail layout was the Telegraph Hill Railroad in San Francisco, which was in operation from 1884 until 1886. The Mount Lowe Railway in Altadena, California, was the first mountain railway in the United States to use the three-rail layout. Three- and two-rail layouts considerably reduced the space required for building a funicular, reducing grading costs on mountain slopes and property costs for urban funiculars. These layouts enabled a funicular boom in the latter half of the 19th century. In 1880 the funicular of Mount Vesuvius inspired the Italian popular song ''Funiculì, Funiculà''. This funicular was destroyed repeatedly by volcanic eruptions and abandoned after the eruption of 1944. 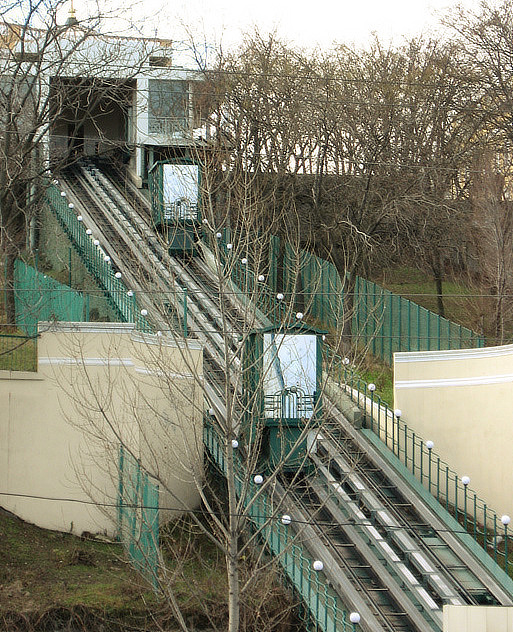 An inclined elevator is not a funicular, since its cars operate independently on the slope, not in interconnected pairs. Notably, Paris' Montmartre Funicular is today a funicular in name only. Its formal title is a relic of its earlier configuration, namely when its two cars originally operated in a counterbalanced, interconnected pair, always moving in opposite directions in concert, thus meeting the definition of a funicular. The system now uses two independently operating cars that can each ascend or descend on demand, qualifying as a double inclined elevator, but retaining the term "funicular" in its title as a historical, albeit misleading, reference.

According to the Guinness World Records, the smallest public funicular in the world is the Fisherman's Walk Cliff Railway in Bournemouth, England, which is long. Stoosbahn in Switzerland, with a maximum slope of 110% (47.7°), is the steepest funicular in the world. The Lynton and Lynmouth Cliff Railway, built in 1888, is the steepest and longest water-powered funicular in the world. It has an elevation of 152 m with 58% gradient. The city of Valparaiso in Chile used to have up to 30 funicular elevators ( es|ascensores). The oldest of them is dating from 1883. 15 remain with almost half in operation, and others in various stages of restoration. The Carmelit in Haifa, Israel, with six stations and a tunnel 1.8 km (1.1 mi) long, is claimed by the Guinness World Records as the "least extensive metro" in the world. Technically, it is an underground funicular. The Dresden Suspension Railway (), which hangs from an elevated rail, is the only suspended funicular in the world.