The cytochrome complex, or cyt ''c'', is a small hemeprotein found loosely associated with the inner membrane of the mitochondrion. It belongs to the cytochrome c family of proteins and plays a major role in cell apoptosis. Cytochrome c is highly water-soluble, unlike other cytochromes, and is an essential component of the electron transport chain, where it carries one electron. It is capable of undergoing oxidation and reduction as its iron atom converts between the ferrous and ferric forms, but does not bind oxygen. It transfers electrons between Complexes III (Coenzyme Q – Cyt C reductase) and IV (Cyt C oxidase). In humans, cytochrome c is encoded by the ''CYCS'' gene.

Cytochrome c is a highly conserved protein across the spectrum of species, found in plants, animals, and many unicellular organisms. This, along with its small size (molecular weight about 12,000 daltons), makes it useful in studies of cladistics. The cytochrome c molecule has been studied for the glimpse it gives into evolutionary biology. Cytochrome c has a primary structure consisting of a chain of about 100 amino acids. Many higher-order organisms possess a chain of 104 amino acids. The sequences of cytochrome c in humans is identical to that of chimpanzees (our closest relatives), but differs from that of horses. Cytochrome c has an amino acid sequence that is highly conserved in eukaryotes, differing by only a few residues. In more than thirty species tested in one study, 34 of the 104 amino acids were conserved; identical at their characteristic position. For example, human cytochrome oxidase reacts with wheat cytochrome ''c'', ''in vitro''; which held true for all pairs of species tested. In addition, the redox potential of +0.25 volts is the same in all cytochrome ''c'' molecules studied. 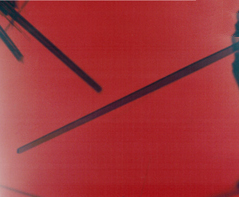 Cytochrome c belongs to class I of the c-type cytochrome family and contains a characteristic CXXCH (cysteine-any-any-cysteine-histidine) amino acid motif that binds heme..This motif is located towards the N-terminus of the peptide chain and it contains a histidine as the fifth ligand of the heme iron. The sixth ligand is provided by a methionine residue found towards the C-terminus. The protein backbone is folded into five α-helices that are numbered α1-α5 from N-terminus to C-terminus. Helices α3, α4 and α5 are referred to as 50s, 60s and 70s helix respectively when referring to mitochondrial cytochrome c.

While most heme proteins are attached to the prosthetic group through iron ion ligation and tertiary interactions, the heme group of cytochrome c makes thioether bonds with two cysteine side chains of the protein. One of the main properties of heme c, which allows cytochrome c to have variety of functions, is its ability to have different reduction potentials in nature. This property determines the kinetics and thermodynamics of an electron transfer reaction.

Cytochrome c is a component of the electron transport chain in mitochondria. The heme group of cytochrome c accepts electrons from the bc1 complex and transfers electrons to the complex IV. Cytochrome c is also involved in initiation of apoptosis. Upon release of cytochrome c to the cytoplasm, the protein binds apoptotic protease activating factor-1 (Apaf-1). Cytochrome c can also catalyze several redox reactions such as hydroxylation and aromatic oxidation, and shows peroxidase activity by oxidation of various electron donors such as 2,2-azino-''bis''(3-ethylbenzthiazoline-6-sulphonic acid) (ABTS), 2-keto-4-thiomethyl butyric acid and 4-aminoantipyrine. A bacterial cytochrome ''c'' functions as a nitrite reductase.

Cytochrome c was also discovered in 1996 by Dr. Xiaodong Wang to have an intermediate role in apoptosis, a controlled form of cell death used to kill cells in the process of development or in response to infection or DNA damage. Cytochrome c binds to cardiolipin in the inner mitochondrial membrane, thus anchoring its presence and keeping it from releasing out of the mitochondria and initiating apoptosis. While the initial attraction between cardiolipin and cytochrome c is electrostatic due to the extreme positive charge on cytochrome c, the final interaction is hydrophobic, where a hydrophobic tail from cardiolipin inserts itself into the hydrophobic portion of cytochrome c. During the early phase of apoptosis, mitochondrial ROS production is stimulated, and cardiolipin is oxidized by a peroxidase function of the cardiolipin–cytochrome c complex. The hemoprotein is then detached from the mitochondrial inner membrane and can be extruded into the soluble cytoplasm through pores in the outer membrane. The sustained elevation in calcium levels precedes cyt ''c'' release from the mitochondria. The release of small amounts of cyt ''c'' leads to an interaction with the IP3 receptor (IP3R) on the endoplasmic reticulum (ER), causing ER calcium release. The overall increase in calcium triggers a massive release of cyt ''c'', which then acts in the positive feedback loop to maintain ER calcium release through the IP3Rs. This explains how the ER calcium release can reach cytotoxic levels. This release of cytochrome c in turn activates caspase 9, a cysteine protease. Caspase 9 can then go on to activate caspase 3 and caspase 7, which are responsible for destroying the cell from within.


As an antioxidative enzyme