Wright State University is a public research university in Dayton, Ohio, with an additional branch campus on Grand Lake St. Marys. Originally a branch campus of Miami University and Ohio State University, Wright State became an independent institution in 1967 and was named in honor of the aviation pioneers Orville and Wilbur Wright, who were residents of nearby Dayton. The university offers bachelor's, master's, and doctoral degrees. It is classified among "R2: Doctoral Universities – High research activity". Wright State's athletic teams compete in the NCAA Division I as a member of the Horizon League, as the Wright State Raiders.

Wright State University first opened in 1964 as a branch campus of Miami University and Ohio State University, occupying only a single building. Groundwork on forming the institution began in 1961 during a time when the region lacked a public university for higher education. A community-wide fundraising effort was conducted in 1962 to establish the university, and the campaign raised the $3 million needed in seed money. Much of the land that the campus was built on was donated by the United States Air Force from excess acreage of Wright-Patterson Air Force Base. The Ohio General Assembly passed legislation in 1965 that transformed the branch campus into a separate institution with its own Advisory Committee on November 5, 1965. It was anticipated the campus would achieve full independent status by 1967 with its rapidly increasing enrollment of full-time students, projected to reach 5,000 within two years. On October 1, 1967, the campus officially became Wright State University following a decision by the Ohio Board of Regents. The name honors the Wright brothers, well-known Dayton residents who are credited with inventing the world's first successful airplane. In 1969, a branch campus opened on the shore of Grand Lake St. Marys in Celina, Ohio

In 2017, Wright State University celebrated its 50th anniversary. Coinciding with the historic event, Wright State created a 50th anniversary website to highlight important milestones and events throughout the university's history. The celebration culminated at Homecoming on September 30 – October 1, 2017, the last day of which was the university's official 50th anniversary. Also in 2017, the university became officially tobacco-free and banned all tobacco products on its Dayton and Lake campuses. Smoking cessation products, such as nicotine-replacement gum, lozenges, and patches were still allowed. The university also offered courses to help students, staff and faculty quit tobacco use. The school decided to go tobacco-free after the Ohio Board of Regents in 2012 recommended all Ohio public universities become tobacco free. Wright State University faculty are unionized and represented by the American Association of University Professors (AAUP). In early 2019 they began a strike after two years of unsuccessful and contentious contract negotiations. An agreement was made on February 10–11 to end the strike. At twenty days, this was the longest higher-ed strike in Ohio history, and one of the longest in US history. Susan Edwards is the university's current president, a role she began January 1, 2020. Previous university presidents: Brage Golding (1966–1973), Robert J. Kegerreis (1973–1985), Paige E. Mulhollan (1985–1994), Harley E. Flack (1994–1998), Kim Goldenberg (1998–2006), David R. Hopkins (2007–2017), and Cheryl B. Schrader (2017–2019). Curtis L. McCray was the interim president from March 17 through June 30, 2017, holding the position following Hopkins' early retirement on March 17, 2017. Schrader was Wright State's seventh president—and first female president—from mid 2017 until she stepped down at the end of 2019 midway through her five-year appointment. On January 1, 2020, Susan Edwards became the university's eighth president.

During the 2008 United States presidential campaign, Republican nominee John McCain announced his selection of Sarah Palin as his running mate and choice for vice president on August 29, 2008 at Wright State. Palin was a relatively unknown figure at the time and the current Governor of Alaska, but soon became a major figure in modern American politics. Eventual winner Barack Obama, who became the first African-American president in American history, held a major rally at Wright State during the campaign as well.

On September 23, 2015, the Commission on Presidential Debates named Wright State the host for the first 2016 United States presidential debate, which was scheduled for September 26, 2016 at the Nutter Center. On July 19, 2016 Wright State University backed out of the debate, citing inability to cover the cost of security.

The university is accredited by the Higher Learning Commission at the doctoral degree-granting level. Wright State is divided into seven colleges and three schools.

The Wright State University Boonshoft School of Medicine was established in 1973. It is accredited by the Liaison Committee on Medical Education. In the 2018-19 academic year, the school had 480 M.D. students, 51 Master of Public Health (M.P.H.) students, 30 M.B.A. students with a concentration in health care management, and 71 M.S. in Pharmacology and Toxicology students. The school adopted its current name in 2005 in honor of the Oscar Boonshoft family, major donors to the medical school. 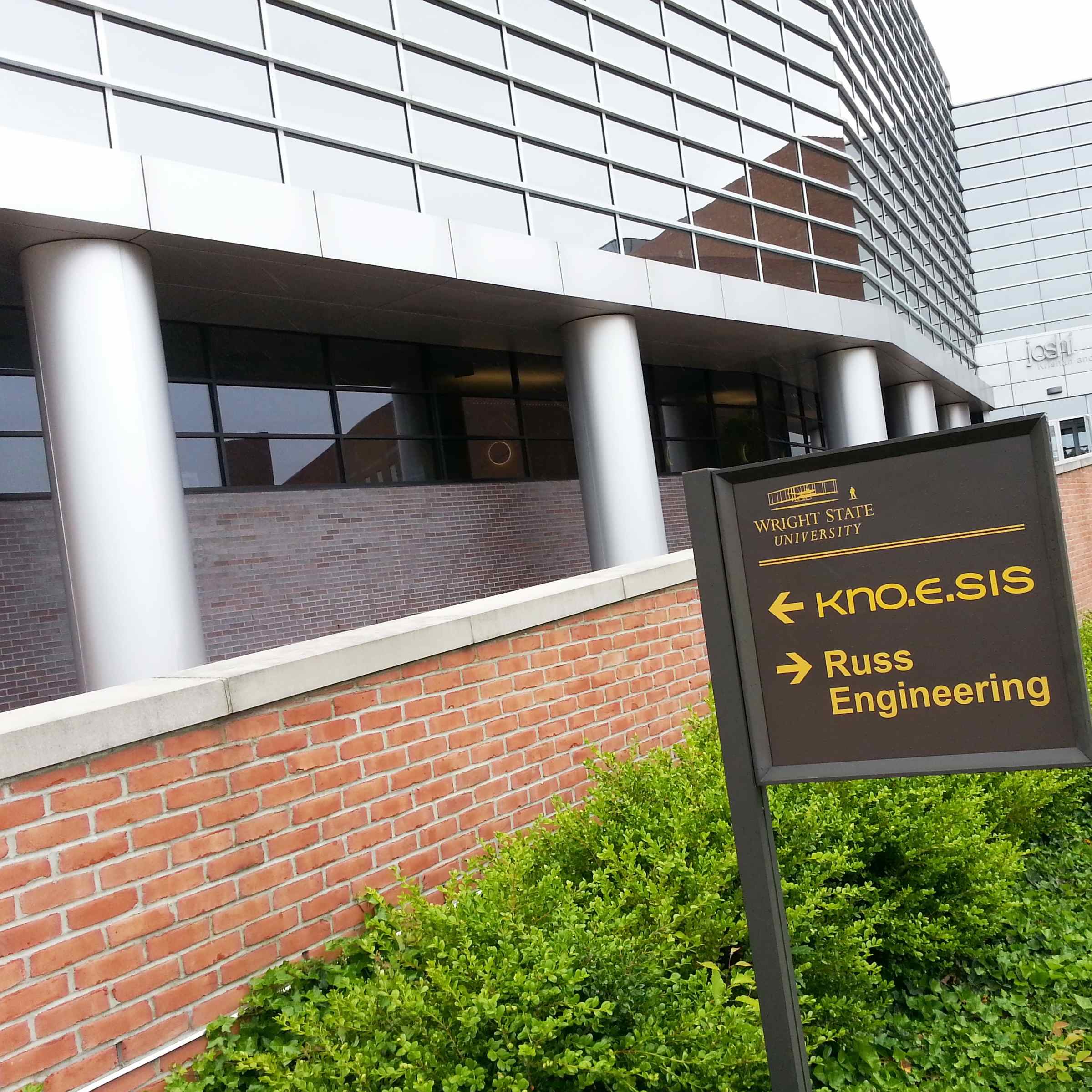 Kno.e.sis center was founded in 2007. In 2009, the Ohio Department of Higher Education established more than 50 Centers of Excellence representing key industrial areas with potential future growth. Kno.e.sis at the Wright State University was one of the selections in the area of Bio-Health Innovations. Research at the center focuses on multidisciplinary areas such as Web 3.0 (Semantic Web, Semantic Sensor Web), Network Science, Social Data Analysis, Machine Learning, Data Mining, Bioinformatics, Natural Language Processing, Visualization, Cloud Computing, High Performance Computing. In recent years, Kno.e.sis has had near 80–100 researchers including 15 faculty and over 60 funded graduate (primarily PhD) students. Kno.e.sis researchers overtime have contributions in the areas related to Computer Science with focus on topics in World Wide Web, including Semantic web, Social Data Analysis, Semantic Sensor Web, and Linked Open Data. Furthermore, they have been a part of developing technical specifications and guidelines for W3C, until 2013.

Collaboration, Education, Leadership, and Innovation in the Arts

Lobby of the Wright State University Creative Arts Center in 2007 In the fall of 2009, Wright State University's three departments of Art, Music, and Theatre, Dance, & Motion Pictures inaugurated a new initiative of collaborative artistic and educational endeavor, called CELIA (Collaboration, Education, Leadership, and Innovation in the Arts), dedicated to enhancing "ongoing collaborations as well as nurture new partnerships." Projects accepted for the CELIA designation demonstrate high-quality, innovative collaborations, and the ability to further strengthen the reputation of the arts at Wright State. One of the first of these projects was the Academy Award-nominated half-hour documentary ''The Last Truck'', produced for HBO and broadcast on Labor Day, 2008. The film documented the closing of a major GM truck plant in Moraine, Ohio, in 2008. More recently, the Department of Theatre, Dance and Motion Pictures co-produced the regional and university premiere production of August: Osage County in the fall of 2010, with the region's professional theatre, The Human Race Theatre Company. In May 2011, the departments of Music and Theatre, Dance and Motion Pictures collaborated with the Dayton Philharmonic a full-stage production of the ''Mass'' by Leonard Bernstein at the Benjamin and Marian Schuster Performing Arts Center in Dayton.