The Thai League 1 ( th, ไทยลีก 1), often referred to as T1, is the top level of the Thai football league system. Contested by 16 clubs, it operates on a system of promotion and relegation with Thai League 2. Seasons run from February to October, with each team playing 30 games (playing all 15 other teams both home and away). It is sponsored by Toyota Motor Thailand and therefore officially known as the Hilux Revo Thai League. In the Thai League, most of the games are played during Saturdays and Sundays, with a few games played on Wednesdays and Fridays.

Thailand has had league-football competition since 1916. Before the inception of the Thai League, the highest level of club football was the semi-professional league Kor Royal Cup ( th, ถ้วย ก.) which was contested in a tournament format from 1916 to 1995.

Thai League was introduced in 1996 by the Football Association of Thailand (FAT) under the name 1996–97 Thailand Soccer League, Thailand Soccer League. Eighteen clubs who earlier competed for the Kor Royal Cup were registered to play in the first edition of a double round-robin league system. Thai Farmers Bank F.C., Thai Farmers Bank was crowned as the first champion of the 1996–97 Thailand Soccer League. The Thai League originally had 10 to 12 clubs each season until Thai Premier League 2007, 2007, when it was expanded to 16 clubs. At the end of each season, the three bottom placed clubs are relegated to the Thai Division 1 League.

In 2009 Thai Premier League, 2009 season, there were significant changes in the lead to the new era of the Thai Premier League. Asian Football Confederation declared the regulations for the associations that have the intention to send the clubs to compete in AFC Champions League starting from 2011. Football Association of Thailand had to establish Thai Premier League co.ltd and forced the clubs in the top league to complete AFC Club License Criteria otherwise Thai clubs will not eligible to play in the Champions League. Clubs were forced to separate themselves from the parent organisations and registered as the independent football authorities. The massive changes occurred in that season. Thailand Premier League renamed to Thai Premier League. Two times league champion Krung Thai Bank F.C., Krung Thai Bank failed to complete the new regulations. The organisation decided to sell the club. The club was acquired by Boon Rawd Brewery, Boon Rawd and rebranded to be Bangkok Glass F.C., Bangkok Glass. Bangkok University had expelled their football club section. The club rebrand itself to Bangkok United F.C., Bangkok United since then. The organisation-based clubs had to relocate to find the local supporters to backup the clubs. Osotspa F.C., Osotspa changed their home stadium to Saraburi Province, TOT F.C., TOT moved to play in Kanchanaburi Province, Kanchanaburi, Royal Thai Navy F.C., Royal Navy played in Rayong Province while TTM Customs F.C., Thailand Tobacco Monopoly integrated to Samut Sakhon Province and rebranded to TTM Samut Sakhon. Muangthong United F.C., Muangthong United were promoted from Thai Division 1 League in that season and won Thai Premier League in their first year in the top league.

Thailand Clasico or The Classic Match of Thailand is the matchup between Muangthong United F.C., Muangthong United and Chonburi F.C., Chonburi. It is the matchup that presents Thai football in the modern era. The name was given to the encounter of two teams due to the hype and massive atmosphere around the match. The first encounter between them happened in the 2009 Thai Premier League season. On 30 May 2009, Chonburi that was regarded as the best club in Thailand at that moment hosted the new powerhouse who were just promoted from Division 1 Muangthong United. The match was played at Nong Prue Stadium, Pattaya. Before the match, Chonburi was the leader in the table after 10 matches of the season while Muangthong followed in second with one less point. Chonburi made the lead by 2–0 in the first thirty minutes but Muangthong bounced back to win by the 5–2 result at the end. The match was full of the exciting and dramatic moments. Then, it was considered one of the most classic matches in Thai League history. The Muangthong versus Chonburi matchup was dubbed as "Thailand Clasico" ever since then.

In 2012 Thai Premier League, 2012 season, Muangthong United F.C., Muangthong United under Serbs, Serbian head coach Slaviša Jokanović, had become the first club in the league history that completed the season with an unbeaten record. Muangthong finished at the top of the final standing with 25 wins and 9 draws.

In 2017, Football Association of Thailand decided to rebrand Thai Premier League into Thai League 1. Since its inception in 1996 the Thai Premier League has relied upon local sponsorship. Re-branding initiatives seek to foster an international identity for the Thai and elevate the league globally through commitment to world class level management and marketing which incorporates multifaceted promotion through various media in order to draw attention to league competition and cups. This rebranding earned the Good Design Award in the Brand Identity branch from the Japan Institute of Design Promotion.

There are 16 clubs in the league, with three promoted teams from Thai League 2 replacing the three teams that were relegated from the 2020-21 Thai League 1, 2020-21 season. Sukhothai F.C., Sukhothai, Trat F.C., Trat and Rayong F.C., Rayong were relegated at the end of the 2020–21 season after finishing in the bottom three places of the table. They were replaced by 2020-21 Thai League 2 champions Nongbua Pitchaya F.C., Nongbua Pitchaya. They were joined by runners-up Chiangmai United F.C., Chiangmai United, who also got promoted for the first time, and Khon Kaen United F.C., Khon Kaen United, promotion playoff winner which was first held in 2020–21 season.

Figures for active players (in bold).

Figures for active players (in bold) . 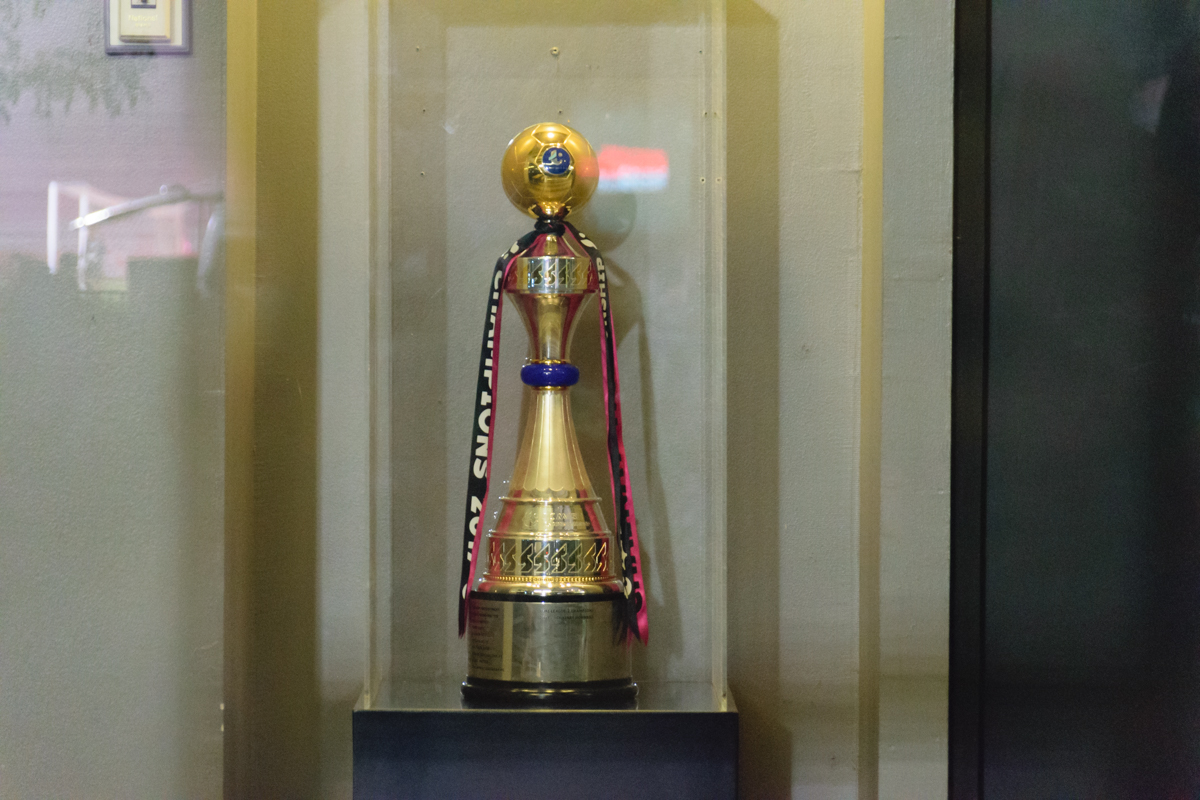 * 2011 – 2016 trophy: In 2010, Football Association of Thailand and Thai Premier League Co. Ltd considered to improve the image of Thai Premier League Trophy. The trophy itself was designed by Glue Creative from England and produced by British Silverware of Sheffield. The trophy was crafted by silver with the European style of a crown. Three divas are holding up the trophy and three golden elephants are standing on the base. The trophy is 75 cm tall and weighs more than 30 kg. The production used 250-man hours of work and the finished trophy worth 2 million baht. * 2017 – current trophy: In 2017, Football Association of Thailand order the trophy produced from England that was created by Royal Jewellers Garrard & Co, Asprey of London to be new champions trophy. The trophy reflecting Thai identity by the use of Kranok pattern mixed with modern pattern and sculpt it pieces by piece.

Player of the Year

Young Player of the Year

Coach of the Year

There are 18 clubs in the Thai League. During the course of a season, which lasts from February to October, each club plays the others twice, once at their home stadium and once at that of their opponents, for a total of 34 games. Teams receive three points for a win and one point for a draw. No points are awarded for a loss. Teams are ranked by total points, then head-to-head, then goal difference, and then goals scored. At the end of each season, the club with the most points is crowned champion. If points are equal, the head-to-head, the goal difference and then goals scored determine the winner. If still equal, teams are deemed to occupy the same position. If there is a tie for the championship, for relegation, or for qualification to other competitions, a play-off match at a neutral venue decides rank. The three lowest placed teams are relegated into the Thai League 2 and the top three teams from the Thai League 2 are promoted in their place.

Like the reserve league, the youth league is open to all the youth teams of all professional clubs in Thailand.

The Football History Association of Thailand