RNA editing (also RNA modification) is a molecular process through which some cells can make discrete changes to specific nucleotide sequences within an RNA molecule after it has been generated by RNA polymerase. It occurs in all living organisms and is one of the most evolutionarily conserved properties of RNAs. RNA editing may include the insertion, deletion, and base substitution of nucleotides within the RNA molecule. RNA editing is relatively rare, with common forms of RNA processing (e.g. splicing, 5'-capping, and 3'-polyadenylation) not usually considered as editing. It can affect the activity, localization as well as stability of RNAs, and has been linked with human diseases. RNA editing has been observed in some tRNA, rRNA, mRNA, or miRNA molecules of eukaryotes and their viruses, archaea, and prokaryotes. RNA editing occurs in the cell nucleus and cytosol, as well as within mitochondria and plastids. In vertebrates, editing is rare and usually consists of a small number of changes to the sequence of the affected molecules. In other organisms, such as squids, extensive editing (''pan-editing'') can occur; in some cases the majority of nucleotides in an mRNA sequence may result from editing. More than 160 types of RNA modifications have been described so far. RNA-editing processes show great molecular diversity, and some appear to be evolutionarily recent acquisitions that arose independently. The diversity of RNA editing phenomena includes nucleobase modifications such as cytidine (C) to uridine (U) and adenosine (A) to inosine (I) deaminations, as well as non-template nucleotide additions and insertions. RNA editing in mRNAs effectively alters the amino acid sequence of the encoded protein so that it differs from that predicted by the genomic DNA sequence.

To identify diverse post-transcriptional modifications of RNA molecules and determine the transcriptome-wide landscape of RNA modifications by means of next generation RNA sequencing, recently many studies have developed conventional or specialised sequencing methods. Examples of specialised methods are MeRIP-seq, m6A-seq, PA-m5C-seq , methylation-iCLIP, m6A-CLIP, Pseudo-seq, Ψ-seq, CeU-seq, Aza-IP and RiboMeth-seq). Many of these methods are based on specific capture of the RNA species containing the specific modification, for example through antibody binding coupled with sequencing of the captured reads. After the sequencing these reads are mapped against the whole transcriptome to see where they originate from. Generally with this kind of approach it is possible to see the location of the modifications together with possible identification of some consensus sequences that might help identification and mapping further on. One example of the specialize methods is PA-m5C-seq. This method was further developed from PA-m6A-seq method to identify m5C modifications on mRNA instead of the original target N6-methyladenosine. The easy switch between different modifications as target is made possible with a simple change of the capturing antibody form m6A specific to m5C specific. Application of these methods have identified various modifications (e.g. pseudouridine, m6A, m5C, 2′-O-Me) within coding genes and non-coding genes (e.g. tRNA, lncRNAs, microRNAs) at single nucleotide or very high resolution.

Recently, functional experiments have revealed many novel functional roles of RNA modifications. Most of the RNA modifications are found on transfer-RNA and ribosomal-RNA, but also eukaryotic mRNA has been shown to be modified with multiple different modifications. Till today there has been identified roughly ten modification on mRNA, from which the N6-methyladenosine is the most abundant and studied. mRNA modifications are linked to many functions in the cell. They ensure the correct maturation and function of the mRNA, but also at the same time act as part of cell’s immune system. Certain modifications like 2’O-methylated nucleotides has been associated with cells ability to distinguish own mRNA from foreign RNA. For example, m6A has been predicted to affect protein translation and localization, mRNA stability, alternative polyA choice and stem cell pluripotency. Pseudouridylation of nonsense codons suppresses translation termination both ''in vitro'' and ''in vivo'', suggesting that RNA modification may provide a new way to expand the genetic code. 5-methylcytosine on the other hand has been associated with mRNA transport from the nucleus to the cytoplasm and enhancement of translation. These functions of m5C are not fully known and proven but one strong argument towards these functions in the cell is the observed localization of m5C to translation initiation site. Importantly, many modification enzymes are dysregulated and genetically mutated in many disease types. For example, genetic mutations in pseudouridine synthases cause mitochondrial myopathy, sideroblastic anemia (MLASA) and dyskeratosis congenital. Compared to the modifications identified from other RNA species like tRNA and rRNA, the amount of identified modifications on mRNA is very small. One of the biggest reasons why mRNA modifications are not so well known is the simple fact about missing research techniques.  Addition to the lack of identified modifications also in question of mRNA the knowledge of associated proteins also drags a little bit behind. Modifications are results of specific enzyme interactions with the RNA molecule. Considering mRNA modifications most of the known related enzymes are the writer enzymes that add the modification on the mRNA. The additional groups of enzymes readers and erasers are for most of the modifications either poorly known of not known at all. For these reasons there has been during the past decade huge interest in studying these modifications and their function.

Transfer RNA or tRNA is the most abundantly modified type of RNA. Modifications in tRNA play crucial roles in maintaining translation efficiency through supporting structure, anticodon-codon interactions, and interactions with enzymes. Anticodon modifications are important for proper decoding of mRNA. Since the genetic code is degenerate, anticodon modifications are necessary to properly decode mRNA. Particularly, the wobble position of the anticodon determines how the codons are read. For example, in eukaryotes an adenosine at position 34 of the anticodon can be converted to inosine. Inosine is a modification that is able to base-pair with cytosine, adenine, and uridine. Another commonly modified base in tRNA is the position adjacent to the anticodon. Position 37 is often hypermodified with bulky chemical modifications. These modifications prevent frameshifting and increase anticodon-codon binding stability through stacking interactions.

Ribosomal RNA modifications are made throughout the ribosome synthesis. Modifications primarily play a role in the structure of the rRNA in order to protect translational efficiency.

Editing by insertion or deletion 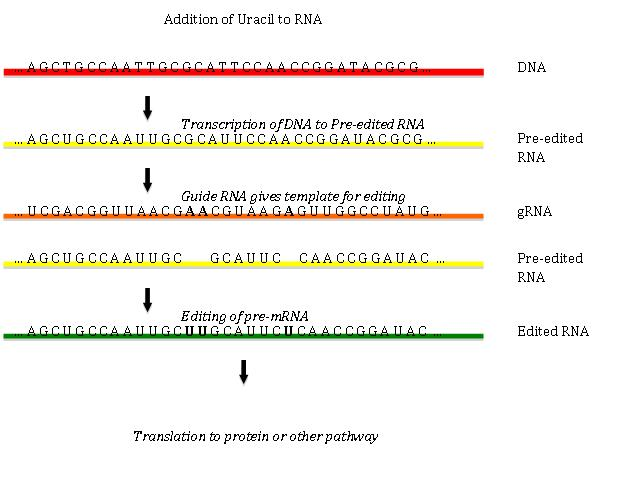 RNA editing through the addition and deletion of uracil has been found in kinetoplasts kinetoplast is a network of circular DNA (called kDNA) inside a large mitochondrionfrom the mitochondria of ''Trypanosoma brucei'' Because this may involve a large fraction of the sites in a gene, it is sometimes called "pan-editing" to distinguish it from topical editing of one or a few sites. Pan-editing starts with the base-pairing of the unedited primary transcript with a guide RNA (gRNA), which contains complementary sequences to the regions around the insertion/deletion points. The newly formed double-stranded region is then enveloped by an editosome, a large multi-protein complex that catalyzes the editing. The editosome opens the transcript at the first mismatched nucleotide and starts inserting uridines. The inserted uridines will base-pair with the guide RNA, and insertion will continue as long as A or G is present in the guide RNA and will stop when a C or U is encountered. The inserted nucleotides cause a frameshift, and result in a translated protein that differs from its gene. The mechanism of the editosome involves an endonucleolytic cut at the mismatch point between the guide RNA and the unedited transcript. The next step is catalyzed by one of the enzymes in the complex, a terminal U-transferase, which adds Us from UTP at the 3' end of the mRNA. The opened ends are held in place by other proteins in the complex. Another enzyme, a U-specific exoribonuclease, removes the unpaired Us. After editing has made mRNA complementary to gRNA, an RNA ligase rejoins the ends of the edited mRNA transcript. As a consequence, the editosome can edit only in a 3' to 5' direction along the primary RNA transcript. The complex can act on only a single guide RNA at a time. Therefore, a RNA transcript requiring extensive editing will need more than one guide RNA and editosome complex.

The editing involves cytidine deaminase that deaminates a cytidine base into a uridine base. An example of C-to-U editing is with the apolipoprotein B gene in humans. Apo B100 is expressed in the liver and apo B48 is expressed in the intestines. In the intestines, the mRNA has a CAA sequence edited to be UAA, a stop codon, thus producing the shorter B48 form. C-to-U editing often occurs in the mitochondrial RNA of flowering plants. Different plants have different degrees of C-to-U editing; for example, eight editing events occur in mitochondria of the moss ''Funaria hygrometrica'', whereas over 1,700 editing events occur in the lycophytes ''Isoetes engelmanii''. C-to-U editing is performed by members of the pentatricopeptide repeat (PPR) protein family. Angiosperms have large PPR families, acting as ''trans'' -factors for ''cis'' -elements lacking a consensus sequence; Arabidopsis has around 450 members in its PPR family. There have been a number of discoveries of PPR proteins in both plastids and mitochondria.

Adenosine-to-inosine (A-to-I) modifications contribute to nearly 90% of all editing events in RNA. The deamination of adenosine is catalyzed by the double-stranded RNA-specific adenosine deaminase (ADAR), which typically acts on pre-mRNAs. The deamination of adenosine to inosine disrupts and destabilizes the dsRNA base pairing, therefore rendering that particular dsRNA less able to produce siRNA, which interferes with the RNAi pathway. The wobble base pairing causes deaminated RNA to have a unique but different structure, which may be related to the inhibition of the initiation step of RNA translation. Studies have shown that I-RNA (RNA with many repeats of the I-U base pair) recruits methylases that are involved in the formation of heterochromatin and that this chemical modification heavily interferes with miRNA target sites. There is active research into the importance of A-to-I modifications and their purpose in the novel concept of epitranscriptomics, in which modifications are made to RNA that alter their function. A long established consequence of A-to-I in mRNA is the interpretation of I as a G, therefore leading to functional A-to-G substitution, e.g. in the interpretation of the genetic code by ribosomes. Newer studies however, have weakened this correlation by showing that I's can also be decoded by the ribosome (although in a lesser extent) as A's and U's. Furthermore it was shown that I's lead to the stalling of ribosomes on the I-rich mRNA. The development of high-throughput sequencing in recent years has allowed for the development of extensive databases for different modifications and edits of RNA. RADAR (Rigorously Annotated Database of A-to-I RNA editing) was developed in 2013 to catalog the vast variety of A-to-I sites and tissue-specific levels present in humans, mice, and flies. The addition of novel sites and overall edits to the database are ongoing. The level of editing for specific editing sites, e.g. in the filamin A transcript, is tissue-specific. The efficiency of mRNA-splicing is a major factor controlling the level of A-to-I RNA editing. Interestingly, ADAR1 and ADAR2 also affect alternative splicing via both A-to-I editing ability and dsRNA binding ability.

It has been shown in previous studies that the only types of RNA editing seen in the plants' mitochondria and plastids are conversion of C-to-U and U-to-C (very rare). RNA-editing sites are found mainly in the coding regions of mRNA, introns, and other non-translated regions.