Persian (), also known by its endonym Farsi (, ', ), is a Western Iranian language belonging to the Iranian branch of the Indo-Iranian subdivision of the Indo-European languages. Persian is a pluricentric language predominantly spoken and used officially within Iran, Afghanistan and Tajikistan in three mutually intelligible standard varieties, namely Iranian Persian, Dari Persian (officially named ''Dari'' since 1958) and Tajiki Persian (officially named ''Tajik'' since the Soviet era). It is also spoken natively in the Tajik variety by a significant population within Uzbekistan, as well as within other regions with a Persianate history in the cultural sphere of Greater Iran. It is written officially within Iran and Afghanistan in the Persian alphabet, a derivation of the Arabic script, and within Tajikistan in the Tajik alphabet, a derivation of Cyrillic. Modern Persian is a continuation of Middle Persian, an official language of the Sasanian Empire (224–651 CE), itself a continuation of Old Persian, which was used in the Achaemenid Empire (550–330 BC). It originated in the region of Fars (Persia) in southwestern Iran. Its grammar is similar to that of many European languages. Throughout history, Persian was used as a prestigious language by various empires centered in Western Asia, Central Asia, and South Asia. Old Persian is attested in Old Persian cuneiform on inscriptions from between the 6th and 4th century BC. Middle Persian is attested in Aramaic-derived scripts (Pahlavi and Manichaean) on inscriptions and in Zoroastrian and Manichaean scriptures from between the 3rd to the 10th century AD (''See Middle Persian literature''). New Persian literature was first recorded in the 9th century, after the Muslim conquest of Persia, since then adopting the Arabic script. Persian was the first language to break through the monopoly of Arabic on writing in the Muslim world, with Persian poetry becoming a tradition in many eastern courts. It was used officially as a language of bureaucracy even by non-native speakers, such as the Ottomans in Asia Minor, the Mughals in South Asia, and the Pashtuns in Afghanistan. It influenced languages spoken in neighboring regions and beyond, including other Iranian languages, the Turkic languages, Armenian, Georgian, and the Indo-Aryan languages. It also exerted some influence on Arabic, while borrowing a lot of vocabulary from it in the Middle Ages. Some of the famous works of Persian literature from the Middle Ages are the ''Shahnameh'' of Ferdowsi, the works of Rumi, the ''Rubaiyat'' of Omar Khayyam, the ''Panj Ganj'' of Nizami Ganjavi, the ''Divān'' of Hafez, ''The Conference of the Birds'' by Attar of Nishapur, and the miscellanea of ''Gulistan'' and ''Bustan'' by Saadi Shirazi. Some of the prominent modern Persian poets were Nima Yooshij, Ahmad Shamlou, Simin Behbahani, Sohrab Sepehri, Rahi Mo'ayyeri, Mehdi Akhavan-Sales, and Forugh Farrokhzad. There are approximately 110 million Persian speakers worldwide, including Persians, Tajiks, Hazaras, Caucasian Tats and Aimaqs. The term ''Persophone'' might also be used to refer to a speaker of Persian.

The term ''Persian'' is an English derivation of Latin , the adjectival form of , itself deriving from Greek (), a Hellenized form of Old Persian (), which means "Persia" (a region in southwestern Iran, corresponding to modern-day Fars). According to the ''Oxford English Dictionary'', the term ''Persian'' as a language name is first attested in English in the mid-16th century. ''Farsi'', which is the Persian word for the Persian language, has also been used widely in English in recent decades, more often to refer to Iran's standard Persian. However, the name ''Persian'' is still more widely used. The Academy of Persian Language and Literature has maintained that the endonym ''Farsi'' is to be avoided in foreign languages, and that ''Persian'' is the appropriate designation of the language in English, as it has the longer tradition in western languages and better expresses the role of the language as a mark of cultural and national continuity. Iranian historian and linguist Ehsan Yarshater, founder of the ''Encyclopædia Iranica'' and Columbia University's Center for Iranian Studies, mentions the same concern in an academic journal on Iranology, rejecting the use of ''Farsi'' in foreign languages. Etymologically, the Persian term derives from its earlier form ( in Middle Persian), which in turn comes from the same root as the English term ''Persian''. In the same process, the Middle Persian toponym ("Persia") evolved into the modern name Fars. The phonemic shift from to is due to the influence of Arabic in the Middle Ages, and is because of the lack of the phoneme in Standard Arabic.

Iran's standard Persian has been called, apart from ''Persian'' and ''Farsi'', by names such as ''Iranian Persian'' and ''Western Persian'', exclusively. Officially, the official language of Iran is designated simply as ''Persian'' (, ). Dari Persian (, ), that is the standard Persian of Afghanistan, has been officially named ''Dari'' (, ) since 1958. Also referred to as ''Afghan Persian'' in English, it is one of Afghanistan's two official languages, together with Pashto. The term ''Dari'', meaning "of the court", originally referred to the variety of Persian used in the court of the Sasanian Empire in capital Ctesiphon, which was spread to the northeast of the empire and gradually replaced the former Iranian dialects of Parthia (Parthian). Tajik Persian (, ), that is the standard Persian of Tajikistan, has been officially designated as ''Tajik'' (, ) since the time of the Soviet Union. It is the name given to the varieties of Persian spoken in Central Asia, in general.

The international language-encoding standard ISO 639-1 uses the code fa for the Persian language, as its coding system is mostly based on the native-language designations. The more detailed standard ISO 639-3 uses the code fas for the dialects spoken across Iran and Afghanistan. This consists of the individual languages Dari (prs) and Iranian Persian (pes). It uses tgk for Tajik, separately.

In general, the Iranian languages are known from three periods: namely Old, Middle, and New (Modern). These correspond to three historical eras of Iranian history; Old era being sometime around the Achaemenid Empire (i.e., 400–300 BC), Middle era being the next period most officially around the Sasanian Empire, and New era being the period afterwards down to present day. According to available documents, the Persian language is "the only Iranian language" for which close philological relationships between all of its three stages are established and so that Old, Middle, and New Persian represent one and the same language of Persian; that is, New Persian is a direct descendant of Middle and Old Persian. The known history of the Persian language can be divided into the following three distinct periods: 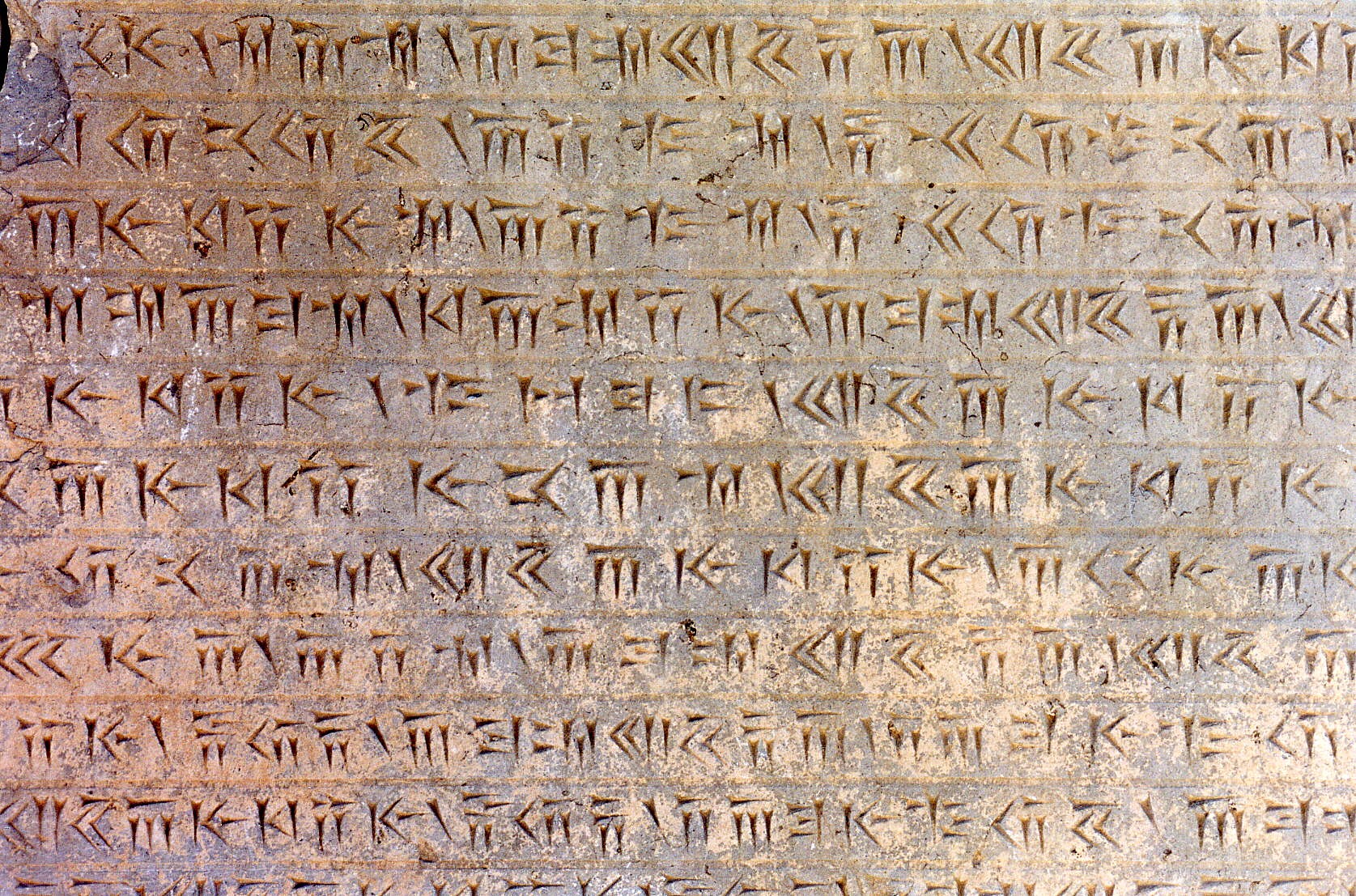 As a written language, Old Persian is attested in royal Achaemenid inscriptions. The oldest known text written in Old Persian is from the Behistun Inscription, dating to the time of King Darius I (reigned 522–486 BC). Examples of Old Persian have been found in what is now Iran, Romania (Gherla), Armenia, Bahrain, Iraq, Turkey and Egypt. Old Persian is one of the oldest Indo-European languages which is attested in original texts. According to certain historical assumptions about the early history and origin of ancient Persians in Southwestern Iran (where Achaemenids hailed from), Old Persian was originally spoken by a tribe called ''Parsuwash'', who arrived in the Iranian Plateau early in the 1st millennium BCE and finally migrated down into the area of present-day Fārs province. Their language, Old Persian, became the official language of the Achaemenid kings.