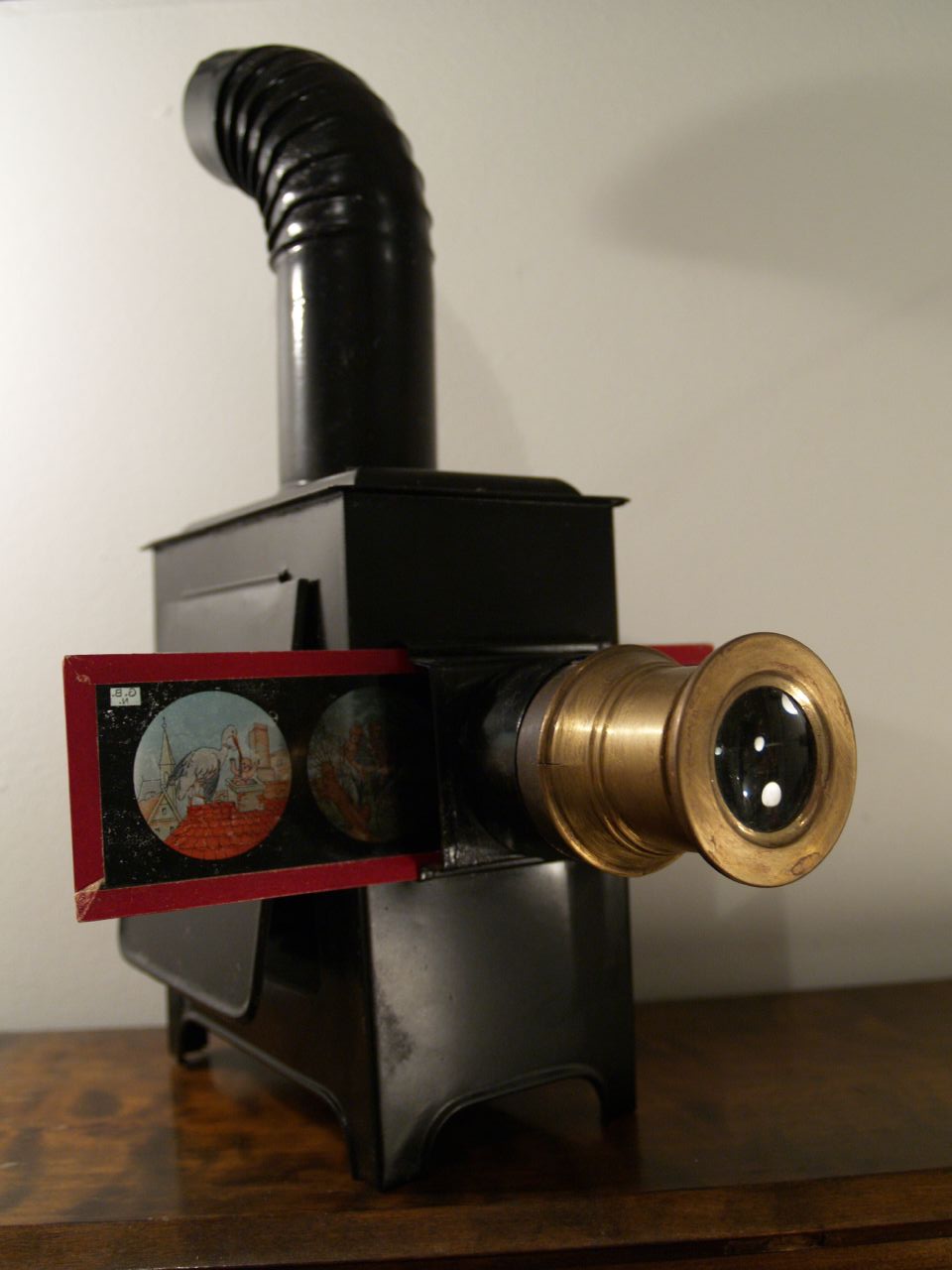 The magic lantern, also known by its Latin name ''laterna magica'', is an early type of image projector that used pictures—paintings, prints, or photographs—on transparent plates (usually made of glass), one or more lenses, and a light source. It was mostly developed in the 17th century and commonly used for entertainment purposes. It was increasingly used for education during the 19th century. Since the late 19th century, smaller versions were also mass-produced as toys. The magic lantern was in wide use from the 18th century until the mid-20th century when it was superseded by a compact version that could hold many 35 mm photographic slides: the slide projector.

The magic lantern used a concave mirror in back of a light source to direct the light through a small rectangular sheet of glass—a "lantern slide" that bore the image—and onward into a lens at the front of the apparatus. The lens adjusted to focus the plane of the slide at the distance of the projection screen, which could be simply a white wall, and it therefore formed an enlarged image of the slide on the screen. Some lanterns, including those of Christiaan Huygens and Jan van Musschenbroek, used 3 lenses for the objective. Biunial lanterns, with two objectives, became common during the 19th century and enabled a smooth and easy change of pictures. Stereopticons added more powerful light sources to optimize the projection of photographic slides.

Originally the pictures were hand painted on glass slides. Initially, figures were rendered with black paint but soon transparent colors were also used. Sometimes the painting was done on oiled paper. Usually black paint was used as a background to block superfluous light, so the figures could be projected without distracting borders or frames. Many slides were finished with a layer of transparent lacquer, but in a later period cover glasses were also used to protect the painted layer. Most handmade slides were mounted in wood frames with a round or square opening for the picture.

After 1820 the manufacturing of hand colored printed slides started, often making use of decalcomania transfers. Many manufactured slides were produced on strips of glass with several pictures on them and rimmed with a strip of glued paper. The first photographic lantern slides, called ''hyalotypes'', were invented by the German-born brothers Ernst Wilhelm (William) and Friedrich (Frederick) Langenheim in 1848 in Philadelphia and patented in 1850.

Apart from sunlight, the only light sources available at the time of invention in the 17th century were candles and oil lamps, which were very inefficient and produced very dim projected images. The invention of the Argand lamp in the 1790s helped to make the images brighter. The invention of limelight in the 1820s made them very much brighter. The invention of the intensely bright electric arc lamp in the 1860s eliminated the need for combustible gases or hazardous chemicals, and eventually the incandescent electric lamp further improved safety and convenience, although not brightness.

Several types of projection systems existed before the invention of the magic lantern. Giovanni Fontana, Leonardo Da Vinci and Cornelis Drebbel described or drew image projectors that had similarities to the magic lantern. In the 17th century, there was an immense interest in optics. The telescope and microscope were invented (in 1608 and the 1620s respectively) and apart from being useful to some scientists, such instruments were especially popular as entertaining curiosities to people who could afford them. The magic lantern would prove a perfect successor.

The magic lantern can be seen as a further development of camera obscura. This is a natural phenomenon that occurs when an image of a scene at the other side of a screen (for instance a wall) is projected through a small hole in that screen as an inverted image (left to right and upside down) on a surface opposite to the opening. It was known at least since the 5th century BC and experimented with in darkened rooms at least since circa 1000 AD. The use of a lens in the hole has been traced back to circa 1550. The portable camera obscura box with a lens was developed in the 17th century. Dutch inventor Cornelis Drebbel is thought to have sold one to Dutch poet, composer and diplomat Constantijn Huygens in 1622, while the oldest known clear description of a box-type camera is in German Jesuit scientist Gaspar Schott's 1657 book ''Magia universalis naturæ et artis''.

The 1645 first edition of German Jesuit scholar Athanasius Kircher's book ''Ars Magna Lucis et Umbrae'' included a description of his invention, the "Steganographic Mirror": a primitive projection system with a focusing lens and text or pictures painted on a concave mirror reflecting sunlight, mostly intended for long-distance communication. He saw limitations in the increase of size and diminished clarity over a long distance and expressed his hope that someone would find a method to improve on this. In 1654, Belgian Jesuit mathematician André Tacquet used Kircher's technique to show the journey from China to Belgium of Italian Jesuit missionary Martino Martini. Some reports say that Martini lectured throughout Europe with a magic lantern, which he might have imported from China, but there's no evidence that it used anything other than Kircher's technique. However, Tacquet was a correspondent and friend of Christiaan Huygens and may thus have been a very early adapter of the magic lantern technique that Huygens developed around this period.

Prominent Dutch scientist Christiaan Huygens, is nowadays widely accepted as the true inventor of the magic lantern. He knew Athanasius Kircher's 1645 edition of ''Ars Magna Lucis et Umbrae'' which described a primitive projection system with a focusing lens and text or pictures painted on a concave mirror reflecting sunlight. Christiaan's father Constantijn had been acquainted with Cornelis Drebbel who used some unidentified optical techniques to transform himself and to summon wonderful appearances in magical performances. Constantijn Huygens wrote very enthusiastically about a camera obscura device that he got from Drebbel in 1622. The oldest known document concerning the magic lantern is a page on which Christiaan Huygens made ten small sketches of a skeleton taking off its skull, above which he wrote "for representations by means of convex glasses with the lamp" (translated from French). As this page was found between documents dated in 1659, it is believed to have been made in the same year. Huygens soon seemed to regret this invention, as he thought it was too frivolous. In a 1662 letter to his brother Lodewijk he claimed he thought of it as some old "bagatelle" and seemed convinced that it would harm the family's reputation if people found out the lantern came from him. Christiaan had reluctantly sent a lantern to their father, but when he realized that Constantijn intended to show the lantern to the court of King Louis XIV of France at the Louvre, Christiaan asked Lodewijk to sabotage the lantern.

Christiaan initially referred to the magic lantern as "la lampe" and "la lanterne", but in the last years of his life he used the then common term "laterna magica" in some notes. In 1694, he drew the principle of a "laterna magica" with two lenses.

Thomas Rasmussen Walgensten (c. 1627 – 1681), a mathematician from Gotland, studied at the university of Leyden in 1657–58. He possibly met Christiaan Huygens during this time (and/or on several other occasions) and may have learned about the magic lantern from him. Correspondence between them is known from 1667. At least from 1664 until 1670, Walgensten demonstrated the magic lantern in Paris (1664), Lyon (1665), Rome (1665-66), and Copenhagen (1670). He "sold such lanterns to different Italian princes in such an amount that they now are almost everyday items in Rome" according to Athanasius Kircher in 1671. In 1670, Walgensten projected an image of Death at the court of King Frederick III of Denmark. This scared some courtiers, but the king dismissed their cowardice and requested to repeat the figure three times. The king died a few days later. After Walgensten died, his widow sold his lanterns to the Danish Royal collection, but they have not been preserved.