The Hakka (), sometimes Hakka Han, are a Han Chinese subgroup whose ancestral homes are chiefly in the Hakka-speaking provincial areas of Guangdong, Fujian, Jiangxi, Guangxi, Sichuan, Hunan, Zhejiang, Hainan and Guizhou. The Chinese characters for ''Hakka'' () literally mean "guest families". Unlike other Han Chinese subgroups, the Hakkas are not named after a geographical region, e.g. a province, county or city, in China. Modern day Hakka are generally identified by both full Hakka and by different degrees of Hakka ancestry and usually speak the Hakka language. The Hakkas are thought to have originated from relatively northern provinces, particularly Henan and Hubei. In a series of migrations, the Hakkas moved and settled in their present areas in Southern China and from there, substantial numbers migrated overseas to various countries throughout the world. As the most diasporic among the Chinese community groups, the worldwide population of Hakkas is about 80 million to 120 million. The Hakkas moved from Central China into Southern China at a time when the earlier Han Chinese settlers who already lived there had developed distinctive cultural identities and languages from Hakkas. The Tunbao and Chuanqing people are other Han Chinese subgroups that migrated from possibly somewhere in Central or Eastern China to Southwestern China while maintaining their ancestral traditions which differentiated them from the native Chinese people. The Hakka people have had significant influence on the course of modern Chinese and overseas Chinese history; in particular, they have been a source of many government and military leaders—in 1984, over half of the Standing Committee of the Chinese Communist Party Politburo were ethnically Hakka. Today, Hakka is one of the official languages of the Republic of China (Taiwan). But like other official languages such as Hokkien, and Formosan languages, they do not have the de facto special status of Taiwanese Mandarin. 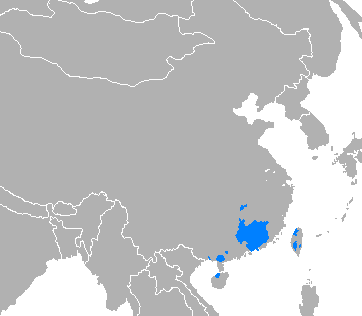