The Fairchild Republic A-10 Thunderbolt II is a single-seat, twin turbofan engine, straight wing jet aircraft developed by Fairchild-Republic for the United States Air Force (USAF). It is commonly referred to by the nicknames "Warthog" or "Hog", although the A-10's official name comes from the Republic P-47 Thunderbolt, a World War II fighter-bomber effective at attacking ground targets. The A-10 was designed for close air support (CAS) of friendly ground troops, attacking armored vehicles and tanks, and providing quick-action support against enemy ground forces. It entered service in 1976 and is the only production-built aircraft that has served in the USAF that was designed solely for CAS. Its secondary mission is to provide forward air controller-airborne support, by directing other aircraft in attacks on ground targets. Aircraft used primarily in this role are designated OA-10. The A-10 was intended to improve on the performance and firepower of the A-1 Skyraider. The A-10 was designed around the 30 mm GAU-8 Avenger rotary cannon. Its airframe was designed for durability, with measures such as of titanium armor to protect the cockpit and aircraft systems, enabling it to absorb a significant amount of damage and continue flying. Its short takeoff and landing capability permits operation from airstrips close to the front lines, and its simple design enables maintenance with minimal facilities. The A-10 served in the Gulf War (Operation Desert Storm), the American–led intervention against Iraq's invasion of Kuwait, where the aircraft distinguished itself. The A-10 also participated in other conflicts such as in Grenada, the Balkans, Afghanistan, Iraq, and against the Islamic State in the Middle East. The A-10A single-seat variant was the only version produced, though one pre-production airframe was modified into the YA-10B twin-seat prototype to test an all-weather night capable version. In 2005, a program was started to upgrade the remaining A-10A aircraft to the A-10C configuration, with modern avionics for use with precision weaponry. The U.S. Air Force had stated the F-35 would replace the A-10 as it entered service, but this remains highly contentious within the USAF and in political circles. With a variety of upgrades and wing replacements, the A-10's service life can be extended to 2040; the service has no planned retirement date .

Post-World War II development of conventionally armed attack aircraft in the United States had stagnated. Design efforts for tactical aircraft focused on the delivery of nuclear weapons using high-speed designs like the F-101 Voodoo and F-105 Thunderchief. Designs concentrating on conventional weapons had been largely ignored, leaving their entry into the Vietnam War led by the Korean War-era Douglas A-1 Skyraider. While a capable aircraft for its era, with a relatively large payload and long loiter time, the propeller-driven design was also relatively slow and vulnerable to ground fire. The U.S. Air Force and Marine Corps lost 266 A-1s in action in Vietnam, largely from small arms fire. The A-1 Skyraider also had poor firepower. The lack of modern conventional attack capability prompted calls for a specialized attack aircraft. On 7 June 1961, Secretary of Defense McNamara ordered the USAF to develop two tactical aircraft, one for the long-range strike and interdictor role, and the other focusing on the fighter-bomber mission. The former became the Tactical Fighter Experimental, or TFX, which emerged as the F-111, while the second was filled by a version of the U.S. Navy's F-4 Phantom II. While the Phantom went on to be one of the most successful fighter designs of the 1960s and proved to be a capable fighter-bomber, its lack of loiter time was a major problem, and to a lesser extent, its poor low-speed performance. It was also expensive to buy and operate, with a flyaway cost of $2 million in FY1965 ($ million today), and operational costs over $900 per hour ($ per hour today). After a broad review of its tactical force structure, the U.S. Air Force decided to adopt a low-cost aircraft to supplement the F-4 and F-111. It first focused on the Northrop F-5, which had air-to-air capability. A 1965 cost-effectiveness study shifted the focus from the F-5 to the less expensive LTV A-7D, and a contract was awarded. However, this aircraft doubled in cost with demands for an upgraded engine and new avionics. 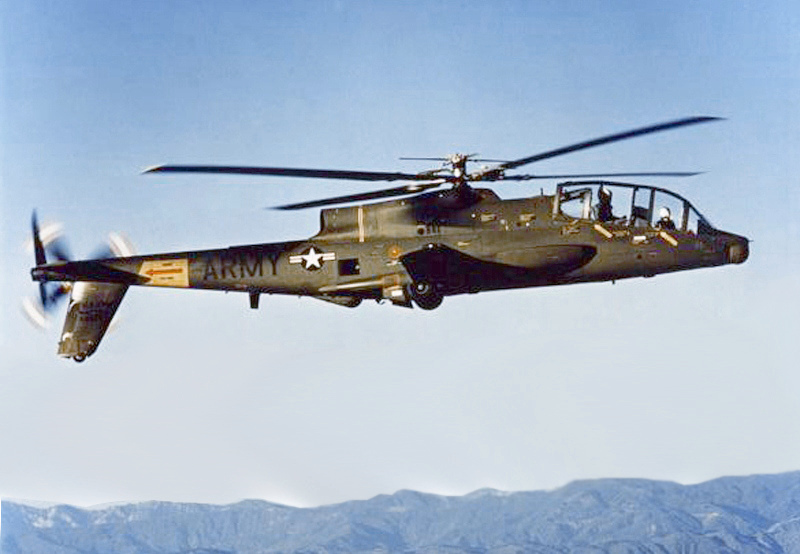 During this period, the United States Army had been introducing the UH-1 Iroquois into service. First used in its intended role as a transport, it was soon modified in the field to carry more machine guns in what became known as the helicopter gunship role. This proved effective against the lightly armed enemy, and new gun and rocket pods were added. Soon the AH-1 Cobra was introduced. This was an attack helicopter armed with long-range BGM-71 TOW missiles able to destroy tanks from outside the range of defensive fire. The helicopter was effective, and prompted the U.S. military to change its defensive strategy in Europe by blunting any Warsaw Pact advance with anti-tank helicopters instead of the tactical nuclear weapons that had been the basis for NATO's battle plans since the 1950s. The Cobra was a quickly made helicopter based on the UH-1 Iroquois and, in the late 1960s, the U.S. Army was also designing the Lockheed AH-56 Cheyenne, a much more capable attack aircraft with greater speed. These developments worried the USAF, which saw the anti-tank helicopter overtaking its nuclear-armed tactical aircraft as the primary anti-armor force in Europe. A 1966 Air Force study of existing close air support (CAS) capabilities revealed gaps in the escort and fire suppression roles, which the Cheyenne could fill. The study concluded that the service should acquire a simple, inexpensive, dedicated CAS aircraft at least as capable as the A-1, and that it should develop doctrine, tactics, and procedures for such aircraft to accomplish the missions for which the attack helicopters were provided.

On 8 September 1966, General John P. McConnell, Chief of Staff of the USAF, ordered that a specialized CAS aircraft be designed, developed, and obtained. On 22 December, a Requirements Action Directive was issued for the A-X CAS airplane, and the Attack Experimental (A-X) program office was formed. On 6 March 1967, the Air Force released a request for information to 21 defense contractors for the A-X. The objective was to create a design study for a low-cost attack aircraft.