Click Here for Items Related To - Demographics of Europe

Figures for the population of Europe vary according to the particular definition of Europe's boundaries. As of 2018, Europe has a total population of over 741 million people. Europe's population growth is comparatively low, and its median age comparatively high, in relation to the world's other continents, especially compared to Asia, Africa and Latin America. Most of Europe is in a mode of sub-replacement fertility, which means that each new(-born) generation is becoming less populous than the older. Nonetheless most European countries still have growing populations due to immigration, population momentum and increases in life expectancy. Some current and past factors in European demography have included emigration, ethnic relations, economic immigration, a declining birth rate and an ageing population.

Estimates for historical population sizes of Europe (including Central Asia, listed under "former USSR") based on Maddison (2007), in millions, with estimated percentage of world population:

Source: Maddison and others (University of Groningen). :Note: These numbers do not include the population of European countries' colonies. Only population within Europe.

330,000,000 people lived in Europe in 1916. In 1950 there were 549,000,000. The population of Europe in 2015 was estimated to be 741 million according to the United Nations, which was slightly less than 11% of the world population. The precise figure depends on the exact definition of the geographic extent of Europe. The population of the European Union (EU) was 509 million as of 2015. Non-EU countries situated in Europe in their entirety account for another 94 million. Five transcontinental countries have a total of 247 million people, of which about half reside in Europe proper. As it stands now, around 10% of the world's people live in Europe. If demographic trends keep their pace, its share may fall to around 7% in 2050, but still amounting to 716 million people in absolute numbers, according to the United Nations estimate. (The decline in the percentage is partly due to high fertility rates in other parts of the world.) The sub-replacement fertility and high life expectancy in most European states mean a declining and aging population as it is not offset by the current immigration level. This situation is expected to be a challenge for their economies, political and social institutions. Countries on the edges of Europe, except for southern Europe, have generally stronger growth than Central European counterparts. Albania and Ireland have strong growth, hitting over 1% annually. 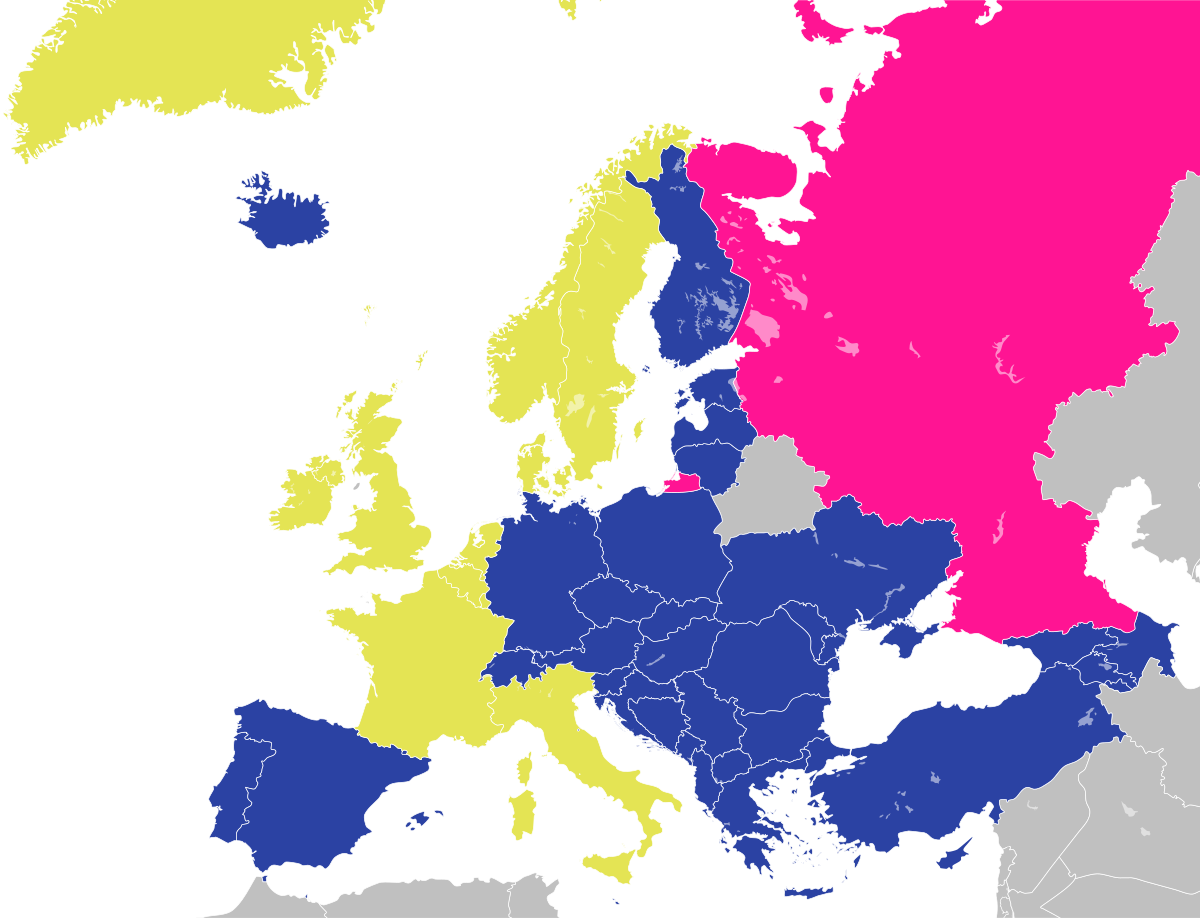 According to different definitions, such as consideration of the concept of Central Europe, the following territories and regions may be subject to various other categorisations aside from geographic conventions.

Mirroring their mostly sub-replacement fertility and high life expectancy, European countries tend to have older populations overall. They had nine of the top ten highest median ages in national populations in 2005. Only Japan had an older population.

Over the last several centuries, religious practice has been on the decline in a process of secularization. Several European countries have experienced a decline in church attendance as well as a decline in the number of people professing a religious belief. The 2010 Eurobarometer survey found that, on average, 51% of the citizens of the European Union that they believe there is a God, 26% believe there is some sort of spirit or life force and 20% don't believe there is any sort of spirit, God or life force. 3% declined to answer. The Eurobarometer survey must be taken with caution, however, as there are discrepancies between it and national census results. For example, in the United Kingdom, the 2001 census revealed that over 70% of the population regarded themselves as "Christians" with only 15% professing to have no religion, though the wording of the question has been criticized as "misleading" by the British Humanist Association. The 2011 census showed a dramatic reduction to less than 60% of the population regarding themselves as "Christians". Despite its decline, Christianity is still the largest religion in Europe. According to a survey published in 2010, 76.2% of Europeans identified themselves as Christians. Catholics were the largest Christian group in Europe, accounting for more than 48% of European Christians. The second-largest Christian group in Europe was the Orthodox, who made up 32% of European Christians. And about 19% of European Christians were part of the Protestant tradition. Europe constitute in absolute terms the world's largest Christian population. According to a 2003 study, 47% of French people declared themselves as agnostics in 2003. This situation is often called "Post-Christian Europe". A decrease in religiousness and church attendance in western Europe (especially in Belgium, the Czech Republic, Finland, France, Germany, the United Kingdom, Norway, the Netherlands and Sweden) has been noted. According to a survey published in 2012 Atheists and Agnostics make up about 18.2% of the European population. According to the same survey the religiously unaffiliated make up the majority of the population only in two European countries: Czech Republic (75%) and Estonia (60%). According to another survey about Religiosity in the European Union from 2012 by Eurobarometer, Christianity was the largest religion in the Union (accounting for 72% of the total population), Catholics were with 48% the largest Christian group in the Union, Protestants made up 12%, Eastern Orthodox made up 8% and other Christians accounted for 4% of the total population. non-believers/agnostics accounted for 16%, atheists accounted for 7% and Muslims accounted for 2%. ;Muslims are younger and have more children than non-Muslims in Europe overall: Source: Pew Research Center ;Fertility and migration drove Muslim population growth in Europe between 2010 and 2016: Source: Pew Research Center

Pan and Pfeil (2004) count 87 distinct "peoples of Europe", of which 33 form the majority population in at least one sovereign state, while the remaining 54 constitute ethnic minorities. The total number of national minority populations in Europe is estimated at 105 million people, or 14% of 770 million Europeans. (including Europeans in Siberia) The largest ethnic groups are the Russians, with 117 million, and the Germans, with 72 million. In some countries such as the United Kingdom, France and Spain, the designation of nationality may controversially take on ethnic aspects, subsuming smaller ethnic groups such as Scots, Welsh, Bretons and Basques, making it difficult to quantify a "British" or "French" ethnicity, for example. Approximately 20 million non-Europeans live in the EU, 4% of the overall population. There are an estimated 10 million Romani people in Europe.

Most of the languages of Europe belong to the Indo-European language family. This family is divided into a number of branches, including Romance, Germanic, Baltic, Slavic, Albanian, Celtic and Greek. The Uralic languages, which include Hungarian, Finnish, and Estonian, also have a significant presence in Europe. The Turkic family also has several European members, while the North Caucasian and Kartvelian families are important in the southeastern extremity of geographical Europe. The Basque language of the western Pyrenees is an isolate unrelated to any other group, while Maltese is the only Semitic language in Europe with national language status. The most spoken language of Europe is Russian, which belongs to the group of Slavic languages. The European Union, which excludes many European countries (e.g. Norway, Russia, Switzerland, United Kingdom), recognised 23 official languages as of 2007. According to the same source, the eight most natively spoken languages in the EU were (percentage of total EU population): # 19% German # 13% French # 12% English # 11% Italian # 9% Spanish # 9% Polish # 7% Romanian # 5% Dutch These figures change when foreign language skills are taken into account. The list below shows the top eight European languages ordered by total number of speakers in the EU: # 49% English # 35% German # 26% French # 16% Italian # 15% Spanish # 10% Polish # 7% Russian # 6% Dutch This makes German the most frequently spoken native language and English the most frequently spoken non-native language overall in the European Union, with German the second-most common language overall. Languages that are not official state languages are protected in many European countries by the European Charter for Regional or Minority Languages. These can include languages spoken by relatively many people, such as Catalan and Basque in Spain, as well as languages spoken by relatively few such as Cornish and Scottish Gaelic in the United Kingdom.

''Homo sapiens'' appeared in Europe roughly 40,000 years ago, with the settlement of the Cro-Magnons. Over the prehistoric period there was continuous settlement in Europe, notably by the immediate descendants of the Proto-Indo-Europeans who migrated west after the advent of the Neolithic revolution.

Studies of mitochondrial DNA (mtDNA) have suggested substantial genetic homogeneity of European populations, with only a few geographic or linguistic isolates appearing to be genetic isolates as well. On the other hand, analyses of the Y chromosome and of autosomal diversity have shown a general gradient of genetic similarity running from the southeast to the northwest of the continent.

A study in May 2009 that examined 19 populations from Europe using 270,000 single nucleotide polymorphisms (SNPs) highlighted the genetic diversity of European populations corresponding to the northwest to southeast gradient and distinguished "several distinct regions" within Europe: * Finland * the Baltic states (Estonia, Latvia and Lithuania), western Russia and Poland. * Central and Western Europe. * Italy, South-Eastern Europe, Southern Russia. In this study, Fst (Fixation index) was found to correlate considerably with geographic distances ranging from ≤0.0010 for neighbouring populations to 0.0230 for Southern Italy and Finland. For comparisons, pair-wise Fst of non-European samples were as follows: Europeans – Yoruba (West Africans) 0.1530; Europeans – Chinese 0.1100; Yoruba (West Africans) – Chinese 0.1900. A recent genetic study published in the "''European Journal of Human Genetics"'' in Nature (2019) showed that populations of Europe, South Asia (India), Western Asia, Northern Africa, and parts of Central Asia are closely related to each other. These mentioned groups are distinguishable from selected control populations in East Asia, Western Africa and Eastern Africa (Somali & Ethiopian Jews, selected as outlier clusters).