ATP synthase is a
protein Proteins are large biomolecules and macromolecules that comprise one or more long chains of amino acid residue (biochemistry), residues. Proteins perform a vast array of functions within organisms, including Enzyme catalysis, catalysing metabo ...
that catalyzes the formation of the energy storage molecule
adenosine triphosphate Adenosine triphosphate (ATP) is an organic compound that provides energy to drive many processes in living cell (biology), cells, such as muscle contraction, nerve impulse propagation, condensate dissolution, and chemical synthesis. Found in all ...
(ATP) using
adenosine diphosphate Adenosine diphosphate (ADP), also known as adenosine pyrophosphate (APP), is an important organic compound in metabolism and is essential to the flow of energy in living cells (biology), cells. ADP consists of three important structural components: ...
(ADP) and inorganic
phosphate In chemistry, a phosphate is an anion, salt (chemistry), salt, functional group or ester derived from a phosphoric acids and phosphates, phosphoric acid. It most commonly means orthophosphate, a derivative of phosphoric acid, orthophosphoric a ...
(Pi). It is classified under ligases as it changes ADP by the formation of P-O bond (phosphodiester bond). ATP synthase is a
molecular machine A molecular machine, nanite, or nanomachine is a molecular component that produces quasi-mechanical movements (output) in response to specific stimuli (input). In cellular biology, macromolecular machines frequently perform tasks essential for l ...
. The overall reaction catalyzed by ATP synthase is: * ADP + Pi + 2H+out ATP + H2O + 2H+in The formation of ATP from ADP and Pi is energetically unfavorable and would normally proceed in the reverse direction. In order to drive this reaction forward, ATP synthase couples ATP synthesis during
cellular respiration Cellular respiration is the process by which biological fuels are oxidised in the presence of an inorganic electron acceptor such as oxygen to produce large amounts of energy, to drive the bulk production of ATP. Cellular respiration may be des ...
to an
electrochemical gradient An electrochemical gradient is a gradient of electrochemical potential, usually for an ion that can move across a membrane. The gradient consists of two parts, the chemical gradient, or difference in Concentration, solute concentration across a me ...
created by the difference in
proton A proton is a stable subatomic particle, symbol , H+, or 1H+ with a positive electric charge of +1 ''e'' elementary charge. Its mass is slightly less than that of a neutron and 1,836 times the mass of an electron (the proton–electron mass ...
(H+) concentration across the
inner mitochondrial membrane The inner mitochondrial membrane (IMM) is the mitochondrial membrane which separates the mitochondrial matrix from the intermembrane space. Structure The structure of the inner mitochondrial membrane is extensively folded and compartmentalized. Th ...
in
eukaryotes Eukaryotes () are organisms whose Cell (biology), cells have a cell nucleus, nucleus. All animals, plants, fungi, and many unicellular organisms, are Eukaryotes. They belong to the group of organisms Eukaryota or Eukarya, which is one of the ...
or the
plasma membrane The cell membrane (also known as the plasma membrane (PM) or cytoplasmic membrane, and historically referred to as the plasmalemma) is a biological membrane that separates and protects the cytoplasm, interior of all Cell (biology), cells from th ...
in bacteria. During
photosynthesis Photosynthesis is a process used by plants and other organisms to Energy transformation, convert light energy into chemical energy that, through cellular respiration, can later be released to fuel the organism's activities. Some of this chemica ...
in plants, ATP is synthesized by ATP synthase using a proton gradient created in the thylakoid lumen through the thylakoid membrane and into the chloroplast stroma. Eukaryotic ATP synthases are F-ATPases, running "in reverse" for an ATPase. This article deals mainly with this type. An F-ATPase consists of two main subunits, FO and F1, which has a rotational motor mechanism allowing for ATP production.

The F1 fraction derives its name from the term "Fraction 1" and FO (written as a subscript letter "o", not "zero") derives its name from being the binding fraction for
oligomycin Oligomycins are macrolides created by ''Streptomyces'' that can be poisonous to other organisms. Function They have use as antibiotics. Oligomycin A is an inhibitor of ATP synthase. In oxidative phosphorylation research, it is used to prevent ...
, a type of naturally derived antibiotic that is able to inhibit the FO unit of ATP synthase. These functional regions consist of different protein subunits — refer to tables. This enzyme is used in synthesis of ATP through aerobic respiration. 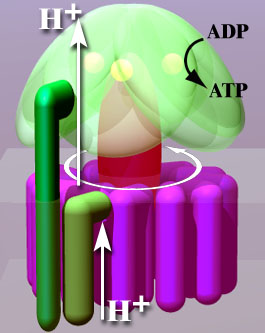 The F1 portion of ATP synthase is
hydrophilic A hydrophile is a molecule or other molecular entity that is intermolecular force, attracted to water molecules and tends to be dissolution (chemistry), dissolved by water.Liddell, H.G. & Scott, R. (1940). ''A Greek-English Lexicon'' Oxford: Clar ...
and responsible for hydrolyzing ATP. The F1 unit protrudes into the
mitochondrial matrix In the mitochondrion, the matrix is the space within the Inner mitochondrial membrane, inner membrane. The word "matrix" stems from the fact that this space is viscous, compared to the relatively aqueous cytoplasm. The mitochondrial matrix contain ...
space. Subunits α and β make a hexamer with 6 binding sites. Three of them are catalytically inactive and they bind ADP. Three other subunits catalyze the ATP synthesis. The other F1 subunits γ, δ, and ε are a part of a rotational motor mechanism (rotor/axle). The γ subunit allows β to go through conformational changes (i.e., closed, half open, and open states) that allow for ATP to be bound and released once synthesized. The F1 particle is large and can be seen in the transmission electron microscope by negative staining. These are particles of 9 nm diameter that pepper the inner mitochondrial membrane.

FO is a water
insoluble In chemistry Chemistry is the scientific study of the properties and behavior of matter. It is a natural science that covers the elements that make up matter to the compounds made of atoms, molecules and ions: their composition, st ...
protein with eight subunits and a transmembrane ring. The ring has a tetramer shape with a helix loop helix protein that goes through conformational changes when protonated and deprotonated, pushing neighboring subunits to rotate, causing the spinning of FO which then also affects conformation of F1, resulting in switching of states of alpha and beta subunits. The FO region of ATP synthase is a proton pore that is embedded in the mitochondrial membrane. It consists of three main subunits, a, b, and c. Six c subunits make up the rotor ring, and subunit b makes up a stalk connecting to F1 OSCP that prevents the αβ hexamer from rotating. Subunit a connects b to the c ring.