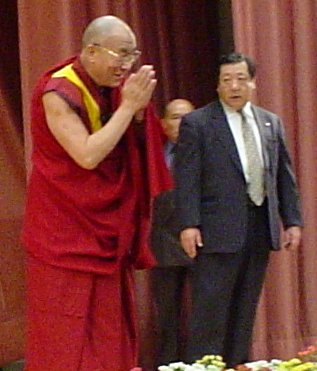 , the highest spiritual leader of
Tibet Tibet (; ; ) is a region in East Asia covering much of the Tibetan Plateau spanning about . It is the traditional homeland of the Tibetan people as well as some other ethnic groups such as Monpa people, Monpa, Tamang, Qiang people, Qiang, S ...
and the retired political leader of Tibet. He is considered a living Bodhisattva; specifically, an emanation of Avalokiteśvara. He is also the leader of the
Gelug The Gelug (Wylie transliteration, Wylie: dGe-Lugs, meaning "virtuous"Kay, David N. (2007). ''Tibetan and Zen Buddhism in Britain: Transplantation, Development and Adaptation,'' p. 39. Routledge.) is the newest and currently most dominant school o ...
school, the newest school of Tibetan Buddhism, formally headed by the Ganden Tripa. The central government of Tibet, the Ganden Phodrang, invested the Dalai Lama with temporal duties until his exile in 1959. On April 29, 1959, the Dalai Lama established the independent Tibetan government in exile, the Central Tibetan Administration, in the north Indian hill station of Mussoorie, which then moved in May 1960 to Dharamsala, where he resides. He retired as political head in 2011 to make way for a democratic government. The 14th Dalai Lama was born in Taktser (Hongya in Chinese), in the east of Qinghai province ( Amdo in Tibetan).