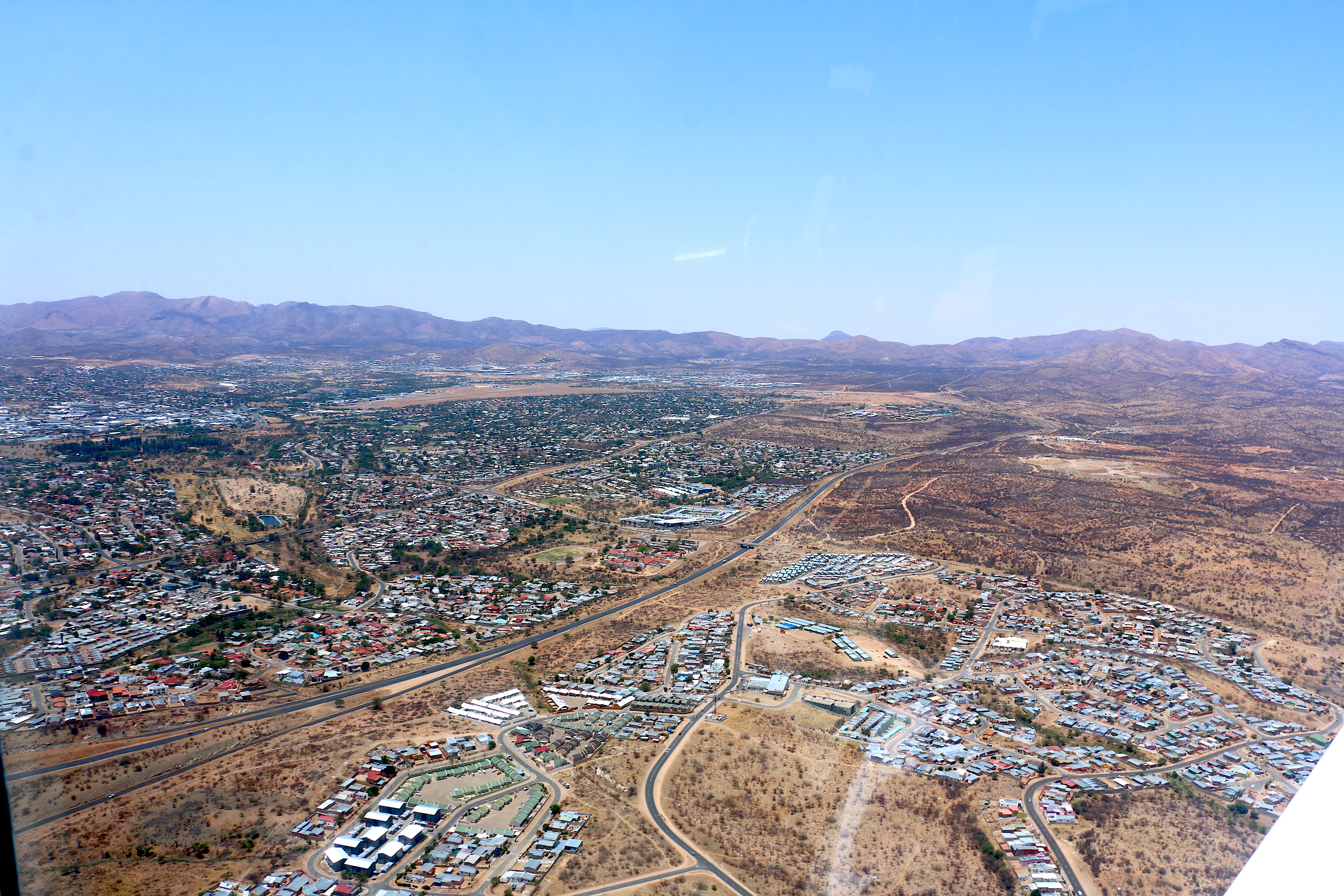 Windhoek (, , ) is the capital and largest city of Namibia. It is located in central Namibia in the ''Khomas Highland'' plateau area, at around above sea level, almost exactly at the country's geographical centre. The population of Windhoek in 2020 was 431,000 which is growing continually due to an influx from all over Namibia. Windhoek is the social, economic, political, and cultural centre of the country. Nearly every Namibian national enterprise, governmental body, educational and cultural institution is headquartered there. The city developed at the site of a permanent hot spring known to the indigenous pastoral communities. It developed rapidly after Jonker Afrikaner, Captain of the Orlam, settled here in 1840 and built a stone church for his community. In the decades following, multiple wars and armed hostilities resulted in the neglect and destruction of the new settlement. Windhoek was founded a second time in 1890 by Imperial German Army Major Curt von François, when the territory was colonised by the German Empire.

The city is the administrative, commercial, and industrial center of Namibia. A 1992/93 study estimated that Windhoek provides over half of Namibia's non-agricultural employment, with its national share of employment in utilities being 96%, in transport and communication 94%, finance and business services 82%. Due to its relative size Windhoek is, even more than many other national capital cities, the social, economic, and cultural centre of the country. Nearly every national enterprise is headquartered here. The University of Namibia is, too, as are the country's only theatre, all ministry head offices, and all major media and financial entities. The governmental budget of the city of Windhoek nearly equals those of all other Namibian local authorities combined. Of the 3,300 US$-millionaires in Namibia, 1,400 live in Windhoek.

Windhoek's three main access roads from Rehoboth, Gobabis, and Okahandja are paved, and are designed to be able to withstand the largest possible flood to be expected in fifty years. Sealed roads can carry traffic moving at and should last for 20 years. In 1928, Kaiserstraße, now Independence Avenue, was the first paved road in Windhoek. Ten years later the next one, Gobabis road, now Sam Nujoma Drive, was also paved. Today out of ca. of Namibia's total road network, about is sealed. In 2014, The Roads Authority has planned to upgrade the Windhoek-Okahandja road to a dual carriageway. It costs about N$1 billion and is expected to be completed in 2021. Later on, they also plan to upgrade the Windhoek and Hosea Kutako International Airport to a dual carriageway. This is expected to be completed in 2022. As everywhere in Namibia, public transport is scarce and transportation across town is largely done by taxi; there were 6,492 registered taxis in 2013.

Windhoek is served by two airports, with the closest one being Eros, south of the city center for smaller craft, and the other being Hosea Kutako International Airport, east of the city. A number of foreign airlines operate to and from Windhoek. Air charters and helicopter and fixed-wing aircraft rentals are also available. Hosea Kutako International Airport handles over 800,000 passengers a year. It has one runway without capacity limitations. The other international airport is located in Walvis Bay, with domestic airports at Luderitz, Oranjemund and Ondangwa. Eros Airport is the busiest airport in Namibia in terms of take offs and landings. This city airport handles approximately 150 to 200 movements per day (around 50,000 per year). In 2004, the airport served 141,605 passengers, the majority of which are light aircraft. Primarily, limitations such as runway length, noise, and air space congestion have kept Eros from developing into a larger airport. Most of Namibia's charter operators have Eros as their base.

Expanding the town area has – apart from financial restrictions – proven to be challenging due to its geographical location. In southern, eastern and western directions, Windhoek is surrounded by rocky, mountainous areas, which make land development costly. The southern side is not suitable for industrial development because of the presence of underground aquifers. This leaves the vast Brakwater area north of town the only feasible place for Windhoek's expansion. Windhoek's City Council has plans to dramatically expand the city's boundaries such that the town area will cover . Windhoek would become the third-largest city in the world by area, after Tianjin and Istanbul, although its population density is only 63 inhabitants per square kilometre.

In 1971, there were roughly 26,000 whites living in Windhoek, outnumbering the black population of 24,000. About one third of white residents at the time, at least 9,000 individuals, were German speakers. Windhoek's population stands at over 325,858 (65% black; 17% white; 18% other), and is growing 4% annually in part due to informal settlements that have even higher growth rates of nearly 10% a year. In public life, Afrikaans, and to a lesser extent German, are still used as lingua francas even though the government only uses English.

Windhoek is the only self-governed settlement in Khomas Region. It is governed by a multi-party municipal council that has fifteen seats. The Council meets once a month (each last Wednesday of the month); its decisions are taken collectively and councillors are bound by such decisions. As individuals, council members have no administrative authority. They cannot give orders or otherwise supervise City employees unless specifically directed to do so by the Council. The Council, however, has complete authority over all administrative affairs in the city. Council members devote their official time to problems of basic policy and act as liaisons between the City and the general public. SWAPO won the 2015 local authority election and gained twelve seats, by having 37,533 votes. Three opposition parties gained one seat each: The Popular Democratic Movement (PDM), formerly DTA, with 4,171 votes, the National Unity Democratic Organisation (NUDO) with 1,453 votes, and the Rally for Democracy and Progress (RDP) with 1,422 votes. SWAPO also won the 2020 local authority election but lost the majority control over the town council. It obtained 20,250 votes and gained five seats. The Independent Patriots for Change (IPC), an opposition party formed in August 2020, obtained 14,028 votes and gained four seats. Two seats each went to the local branch of the Affirmative Repositioning movement (8,501 votes) and the Landless People's Movement (LPM, a new party registered in 2018, 7,365 votes). PDM (5,411 votes) and NUDO (1,455 votes) obtained one seat each.

Windhoek is known as the art capital of Namibia. The National Art Gallery, National Theatre and the National Museum are all located here. Two locations are part of the National Museum, the Alte Feste (historical) showcases a range of colonial items such as wagons and domestic items, while the Owela Museum (scientific; named after Owela, a traditional game played with pebbles) contains displays of minerals, fossils and meteorites and gives an insight into traditional village life. There are also the Independence Memorial Museum, the National Library of Namibia and the Windhoek Public Library, built in 1925, next to the Alte Feste.

thumb|Tintenpalast in Windhoek * Alte Feste – (''Old Fortress'') Built in 1890, today houses the National Museum. * Curt von François monument in front of the municipality building. Inaugurated on 18 October 1965 on the occasion of the 75th anniversary of the second foundation of the town by von François.