The is a subway line of the Tokyo Metropolitan Bureau of Transportation (Toei) network in Tokyo, Japan. The line runs between Nishi-Takashimadaira in Itabashi and Meguro in Shinagawa. Trains continue with direct service into the Meguro Line of Tokyu Corporation for . The portion between and Meguro is shared with the Tokyo Metro Namboku Line. The line was named after the Mita district in Minato, Tokyo, under which it passes. On maps and signboards, the line is shown in blue (O). Stations carry the letter "I" followed by a two-digit number.

Platforms on the Mita Line are equipped with chest-height automatic platform gates that open in sync with the train doors. The line was the first in the Tokyo subway system to have low barriers. The Tokyo Metro Namboku Line has used full-height platform screen doors since its opening. As of May 2020, the platform doors are being overhauled for future 8 car operation. The right-of-way and stations between Shirokane-Takanawa and Meguro are shared with the Tokyo Metro Namboku Line - a unique situation on the Tokyo subway where both operators share common infrastructure. Under an agreement of both parties, the fare for this section is calculated on the Toei system for passengers traveling to stations on the Mita Line past Shirokane-Takanawa, using the Tokyo Metro system for those travelling on the Namboku Line past Shirokane-Takanawa, and on the system "most beneficial to the passenger" (presently the Tokyo Metro schedule) for travel solely on the shared section. According to the Tokyo Metropolitan Bureau of Transportation, as of June 2009 the Mita Line is the ninth most crowded subway line in Tokyo, running at 164% capacity between Nishi-Sugamo and Sugamo stations. 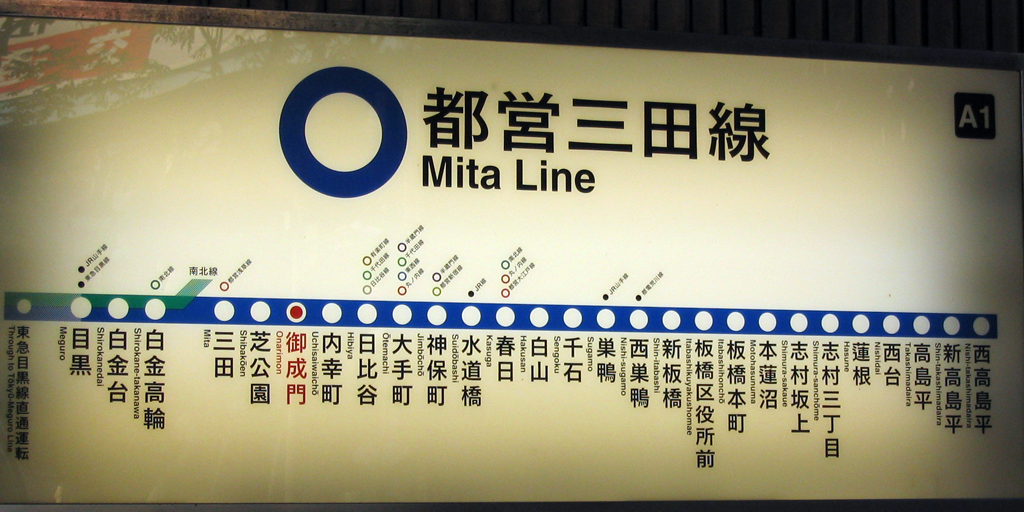 All trains are 6-car sets unless otherwise noted.

{{Unreferenced section|date=March 2012 The Mita Line was first envisioned in 1957 as a northern branch of Line 5 (the present Tōzai Line), serving the section between Ōtemachi and Itabashi. Under a revised proposal in 1962, the line was made independent and its construction undertaken by the Tokyo Metropolitan Government. The new line (Line 6) was planned to run from Gotanda Station on the southwestern side of the Yamanote Line through central Tokyo, with its northern extensions via {{Nihongo|Yamatochō|大和町 in Itabashi (near present {{STN|Itabashi-honchō), diverting to {{STN|Kami-Itabashi and {{Nihongo|Shimura|志村 (present {{STN|Takashimadaira). The southernmost portion, from {{STN|Sengakuji to {{STN|Nishi-Magome and Nishi-Magome depot, was to be shared with Line 1 (Asakusa Line); therefore, Line 6 would be {{RailGauge|1435mm gauge. Due to political considerations, the design of the Mita Line changed several times during the early 1960s. There were plans for it to run to Toda, Saitama, to serve a boat-racing venue for the 1964 Summer Olympics. The government of Saitama also proposed the construction of a new subway line which would allow through service on the Mita Line as far as Ōmiya Station. In 1964, these plans were changed to allow the Mita Line to connect with the Tōbu Tōjō Line via a branch to be built by Tobu between {{Nihongo|Yamatomachi|大和町 (now {{STN|Wakōshi), and Shimura, the northern end of Line 6. At the southern end the junction with the Tokyu network would be via a connecting line, which would be constructed by Tokyu from Sengakuji to {{Nihongo|Kirigaya|桐ヶ谷 on the Tōkyū Ikegami Line; the route would continue to the then-Den-en-toshi Line and finally west, down to {{STN|Nagatsuta. As a result, the construction standards of Line 6 were based on those of Tobu and Tokyu (such as {{RailGauge|1067mm gauge track and 20-meter-long cars - today, the Mita Line is the only Toei line to use this gauge). A depot was planned at Shimura, independent of the Nishi-Magome depot on Line 1. However, both Tokyu and Tobu decided the following year to operate their through services with the Teito Rapid Transit Authority (TRTA, now Tokyo Metro) lines instead. With no through service opportunities available the Tokyo Metropolitan Government began construction on the central portion of the line, leaving the plans for the Itabashi and Mita ends open for future development. This required an extension somewhere south of {{Nihongo|Seishōkō-mae|清正公前 (present {{STN|Shirokane-Takanawa), probably to the then-Mekama Line of Tokyu (on the commencement of inter running to Mita and Namboku lines, the Mekama Line was divided into the Meguro Line and Tōkyū Tamagawa Line) which competed with TRTA Line 7, later called the Tokyo Metro Namboku Line. The first segment of the line opened on December 27, 1968, between {{STN|Sugamo and {{STN|Takashimadaira (10.4 km). The line was extended a further 7.3 km south to {{STN|Hibiya on June 30, 1972 and 3.3 km further south to Mita on November 27, 1973. The northern 1.5 km extension (originally licensed to Tobu and later transferred to the Tokyo government bureau of transportation) was completed on May 6, 1976. For the next 24 years, the line operated between Mita and Nishi-Takashimadaira; the authorized Mita and Sengakuji section had been left uncompleted. In 1985 the then-Ministry of Transport finally settled the plan regarding the southern extension of the line, and shelved all plans for further extension to the north due to the development of the Saikyō Line. On September 26, 2000, the final 4 km segment from Mita to Meguro opened, and through service to the Meguro Line of Tokyu began at the same time, at which point the line switched to driver-only operation.