Somali (Latin: ; Osmanya: 𐒖𐒍 𐒈𐒝𐒑𐒛𐒐𐒘 ) is an Afroasiatic language belonging to the Cushitic branch. It is spoken as a mother tongue by Somalis in Greater Somalia and the Somali diaspora. Somali is an official language of Somalia and Somaliland, a national language in Djibouti, and a working language in the Somali Region of Ethiopia and also in North Eastern Kenya. It is used as an adoptive language by a few neighboring ethnic minority groups and individuals. The Somali language is written officially with the Latin alphabet.

Somali is classified within the Cushitic branch of the Afroasiatic family, specifically, Lowland East Cushitic in addition to Afar and Saho. Somali is the best-documented Cushitic language, with academic studies of the language dating back to the late 19th century.

The Somali language is spoken in Somali inhabited areas of Somalia, Djibouti, Ethiopia, Kenya, Yemen and by members of the Somali diaspora. It is also spoken as an adoptive language by a few ethnic minority groups and individuals in Somali majority regions. Somali is the second most widely spoken Cushitic language after Oromo. As of 2020, there were approximately 18.63 million speakers of Somali, spread in Greater Somalia of which around 7.8 million resided in Somalia. The language is spoken by an estimated 95% of the country's inhabitants, and also by a majority of the population in Djibouti. Following the start of the Somali Civil War in the early 1990s, the Somali-speaking diaspora increased in size, with newer Somali speech communities forming in parts of the Middle East, North America and Europe.

Constitutionally, Somali and Arabic are the two official languages of Somalia. Somali has been an official national language since January 1973, when the Supreme Revolutionary Council (SRC) declared it the Somali Democratic Republic's primary language of administration and education. Somali was thereafter established as the main language of academic instruction in forms 1 through 4, following preparatory work by the government-appointed Somali Language Committee. It later expanded to include all 12 forms in 1979. In 1972, the SRC adopted a Latin orthography as the official national alphabet over several other writing scripts that were then in use. Concurrently, the Italian-language daily newspaper ''Stella d'Ottobre'' ("The October Star") was nationalized, renamed to ''Xiddigta Oktoobar'', and began publishing in Somali. The state-run Radio Mogadishu has also broadcast in Somali since 1943. Additionally, the regional public networks the Puntland TV and Radio and Somaliland National TV, as well as Eastern Television Network and Horn Cable Television, among other private broadcasters, air programs in Somali. Somali is recognized as an official working language in the Somali Region of Ethiopia. Although it is not an official language of Djibouti, it constitutes a major national language there. Somali is used in television and radio broadcasts, with the government-operated Radio Djibouti transmitting programs in the language from 1943 onwards. The Kenya Broadcasting Corporation also broadcasts in the Somali language in its Iftin FM Programmes. Afsoomali is spoken in North Eastern Kenya The Somali language is regulated by the Regional Somali Language Academy, an intergovernmental institution established in June 2013 in Djibouti City by the governments of Djibouti, Somalia and Ethiopia. It is officially mandated with preserving the Somali language. As of 2013, Somali is also one of the featured languages available on Google Translate. 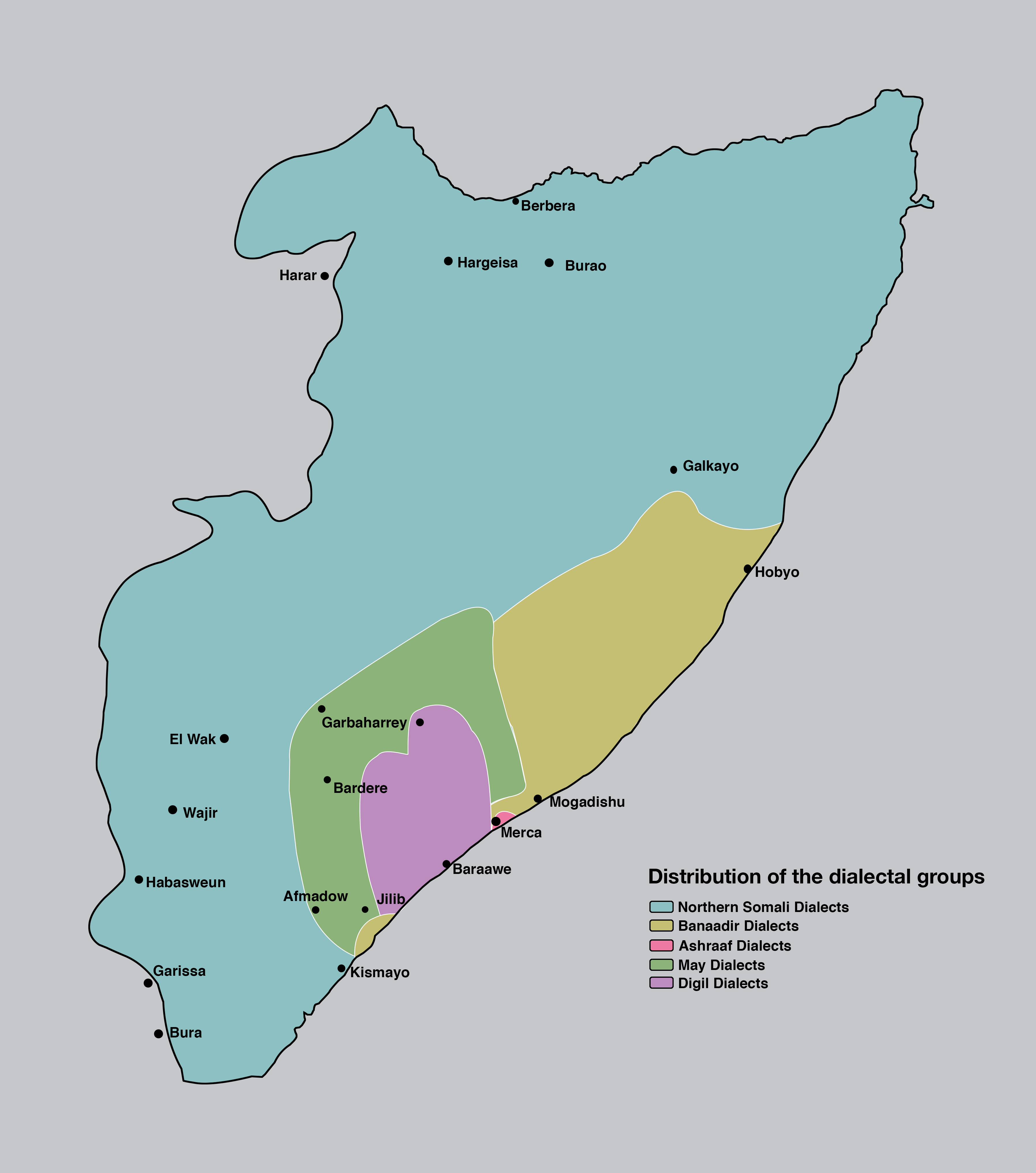 Somali linguistic varieties are broadly divided into three main groups: Afsoomali, Benadir and Maay. Northern Somali (or Nsom) forms the basis for Standard Somali. It is spoken by more than 85% of the entire Somali population, with its speech area stretching from Djibouti, Northern Somalia, Somali Region of Ethiopia, North Eastern Kenya to most parts of Somalia This widespread modern distribution is a result of a long series of southward population movements over the past ten centuries from the Gulf of Aden littoral. Lamberti subdivides Northern Somali is into three dialects: Northern Somali proper (spoken in the northwest; he describes this dialect as Northern Somali in the proper sense), the Darod group (spoken in the northeast and along the eastern Ethiopia frontier; greatest number of speakers overall), and the Lower Juba group (spoken by northern Somali settlers in the southern riverine areas).