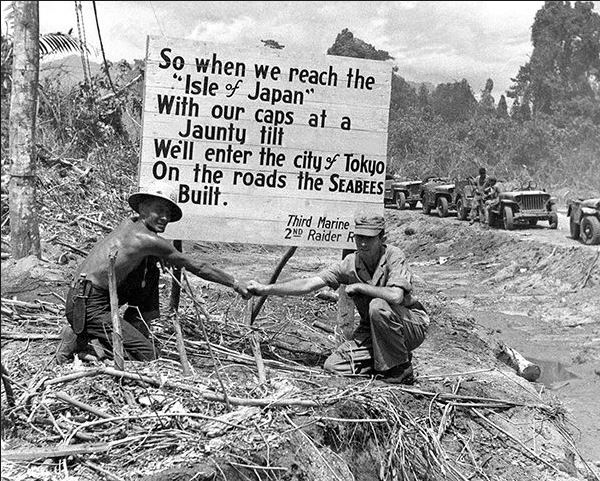 United States Naval Construction Battalions, better known as the Navy Seabees, form the U.S. Naval Construction Force (NCF). The Seabee nickname is a heterograph of the first letters "C B" from the words Construction Battalion. Depending upon context "Seabee" can refer: all enlisted personnel in the USN's occupational field 7 (OF-7), all personnel in the Naval Construction Force (NCF), or Construction Battalion. Seabees serve both in and outside the NCF. During World War II they were plank-holders of both the Naval Combat Demolition Units and the Underwater Demolition Teams (UDTs). The men in the NCF considered these units to be "Seabee". In addition, Seabees served as elements of Cubs, Lions, Acorns and the United States Marine Corps. They also provided the manpower for the top secret CWS Flame Tank Group. Today the Seabees have many special task assignments starting with Camp David and the Naval Support Unit at the Department of State. Seabees serve under both Commanders of the Naval Surface Forces Atlantic/Pacific fleets as well as on many base Public Works and USN diving commands. Naval Construction Battalions were conceived of as replacements to civilian construction companies in combat zones after the Pearl Harbor. At the time civilian contractors had roughly 70,000 men working U.S.N. contracts overseas. International law made it illegal for civilian workers to resist an attack. Doing so would classify them as guerrillas and could lead to summary execution. That is exactly what happened at Wake

In February 1942 CNO Admiral Harold Rainsford Stark recommended African Americans for ratings in the construction trades. In April the Navy announced it would enlist African Americans in the Seabees. Even so, there were just two CBs that were "colored" units, the 34th and 80th. Both had white Southern officers and black enlisted. Both battalions experienced problems with that arrangement that led to the replacement of the officers. The men of the 34th went on a hunger strike which made national news. The Commander of the 80th had 19 enlisted dishonorably discharged for sedition. The NAACP and Thurgood Marshall got 14 of those reversed. In 1943 the Navy drew up a proposal to raise the number of colored CBs to 5 and require that all non-rated men in the next 24 CBs be colored. The proposal was approved, but not acted on. The lack of stevedores in combat zones was a huge issue for the Navy. Authorization for the formation of cargo handling CBs or "Special CBs" happened mid-September 1942.