Sacramental bread, sometimes called altar bread, Communion bread, the Lamb or simply the host ( la|hostia|lit=sacrificial victim), is the bread used in the Christian ritual of the Eucharist (also referred to as the Lord's Supper or Holy Communion, among other names). Along with sacramental wine, it is one of two "elements" of the Eucharist. The bread may be either leavened or unleavened (appearing as a wafer), depending on tradition. Roman Catholic theology generally teaches that at the Words of Institution the bread is changed into the Body of Christ (see transubstantiation), whereas Eastern Christian theology generally views the epiclesis as the point at which the change occurs. Some Protestants believe transignification occurs at the Words of Institution.

The word "host" is derived from the Latin ''hostia'', which means "sacrificial victim". The term can be used to describe the bread both before and after consecration, although it is more correct to use it after consecration (prior to consecration, the term "altar bread" is preferred). The sacrifice of Jesus, according to Christian theology, puts an end to the need for animal sacrifice as had been practiced in the Jerusalem Temple and all blood sacrifice once and for all. However the word was retained to describe the bread of Eucharist as a liturgical representation of the Christ's sacrifice.

and particles placed on the diskos during the Liturgy of Preparation for the Divine Liturgy ]] With the exception of Churches of the Armenian Rite and the Maronite Church, Orthodox Churches and Eastern Catholic Churches use leavened bread for the Eucharist. Thus, the sacramental bread symbolizes the Resurrected Christ. The ''hostia'' or sacramental bread, known as ''prosphorá'' or a πρόσφορον (''prósphoron'', "offering") may be made out of only four ingredients: fine (white) wheat flour, pure water, yeast, and salt. Sometimes holy water will be either sprinkled into the dough or on the kneading trough at the beginning of the process.

The baking may only be performed by a believing Orthodox Christian in good standing—having preferably been recently to Confession, and is accompanied by prayer and fasting. Before baking, each loaf is formed by placing two disks of dough, one on top of the other, and stamping it with a special liturgical seal. The prosphora should be fresh and not stale or moldy when presented at the altar for use in the Divine Liturgy. Often several prosphora will be baked and offered by the faithful, and the priest chooses the best one for the Lamb (Host) that will be consecrated. The remaining loaves are blessed and offered back to the congregation after the end of the Divine Liturgy (Eucharist); this bread is called the ''antidoron'' (Greek: αντίδωρον, ''antídōron''), i.e. a "gift returned", or "in place of the gifts". 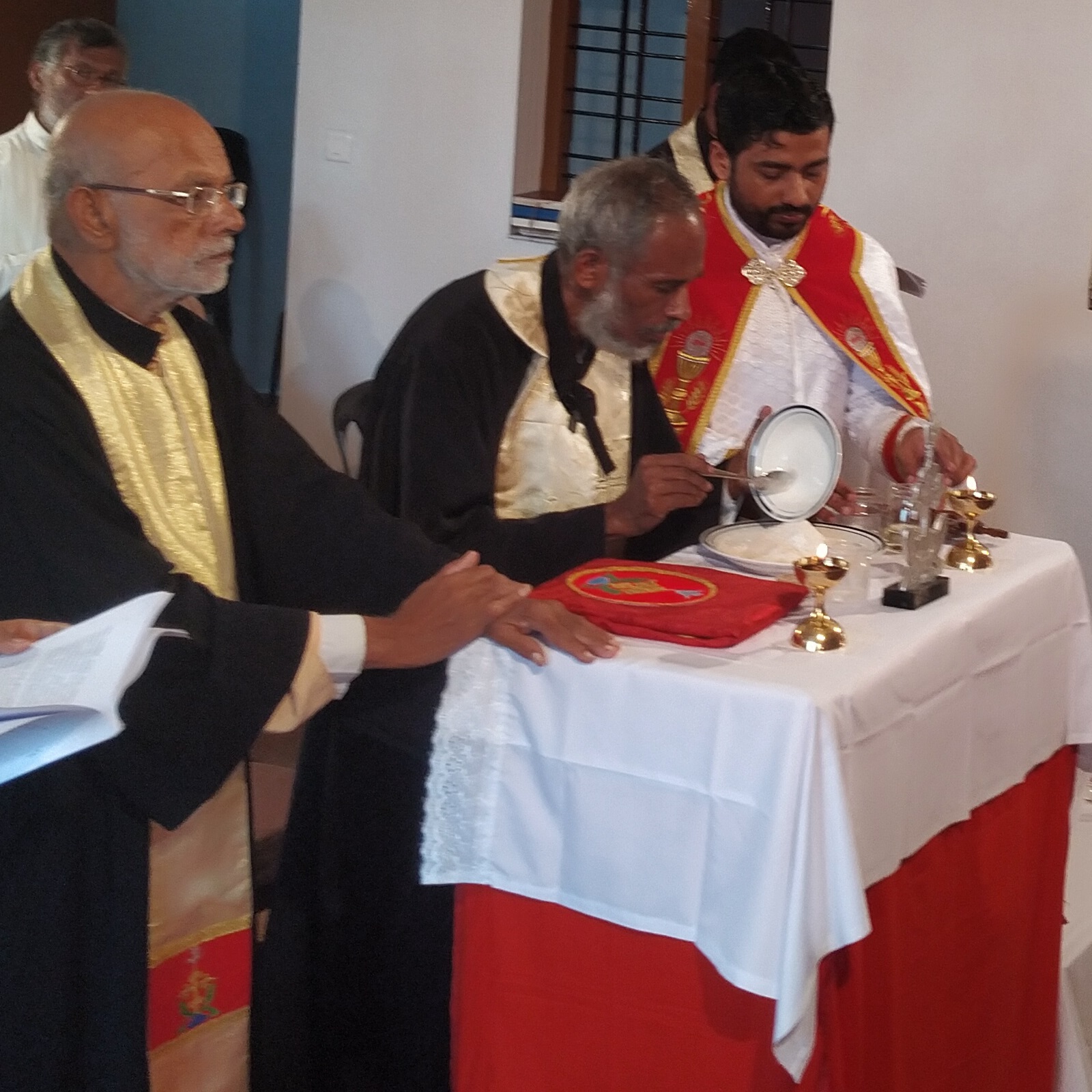 The Byzantine Rite Eastern Catholic Churches (like the Eastern Orthodox Church) use leavened bread for Prosphora (the Greek word for Eucharistic altar bread). The Maronite Church has adopted the use of unleavened bread due to Liturgical Latinisation. The Syro-Malabar Church uses both unleavened bread as well as leavened bread in which Malka is added.

A host is a portion of bread used for Holy Communion in many Christian churches. In Western Christianity the host is often a thin, round, unleavened wafer. hosts for the Celebrant and wafers for the communicants.]] In the Roman Rite, unleavened bread is used as in the Jewish Passover or Feast of Unleavened Bread. The Code of Canon Law

requires that the hosts be made from wheat flour and water only, and recently made so that there is no danger of spoiling. Hosts are often made by nuns as a means of supporting their religious communities. However, in New Zealand, the St Vincent de Paul Society hires individuals with intellectual disabilities to bake, cut out, and sort the bread, thereby offering paid employment to those who would not otherwise have that option. The General Instruction of the Roman Missal §321 recommends that "the eucharistic bread ... be made in such a way that the priest at Mass with a congregation is able in practice to break it into parts for distribution to at least some of the faithful. ... The action of the fraction (breaking of bread), which gave its name to the Eucharist in apostolic times, will bring out more clearly the force and importance of the sign of unity of all in the one bread, and of the sign of charity by the fact that the one bread is distributed among the brothers and sisters." In 1995 Cardinal Joseph Ratzinger, then Prefect of the Congregation for Divine Worship and the Discipline of the Sacraments, wrote a letter to the Episcopal Conferences in which he expanded the Code of Canon Law, stating that low-gluten bread would be considered "valid matter" for hosts as long as no additional substances "alterdthe nature of the substance of the bread". Since the 2000s, hosts with low gluten content have been manufactured in the United States, especially in parts of Missouri and New York. Hosts are one of the causes of lack of recovery for people with celiac disease who follow a gluten-free diet, which must be strict and maintained for life to allow the recovery of the intestinal mucosa and reduce the risk of developing severe health complications.

thumb|Elder_presiding_at_the_Eucharist,_using_a_leavened_loaf_of_bread.html" style="text-decoration: none;"class="mw-redirect" title="Elder (Methodism)">Elder presiding at the Eucharist, using a leavened loaf of bread">Elder (Methodism)">Elder presiding at the Eucharist, using a leavened loaf of bread In the varying Protestant denominations, there is a wide variety of practices concerning the sacramental bread used. Some, such as the Christian Congregation use leavened loaves of bread, others, such as Lutherans, continue to use unleavened wafers like the Roman Catholics, and some use matzo. Reformed Christians use rolls which are broken and distributed to symbolize their belief that Christ is not physically present in their bread. Among those who use the unleavened wafers, there is a great deal of variation: some are square or triangular rather than round, and may even be made out of whole wheat flour.

The Church of Jesus Christ of Latter-day Saints (Mormons) has no strict rules on the type of bread used for sacramental purposes. Latter-day Saint scriptures state: "For, behold, I say unto you, that it mattereth not what ye shall eat or what ye shall drink when ye partake of the sacrament, if it so be that ye do it with an eye single to my glory—remembering unto the Father my body which was laid down for you, and my blood which was shed for the remission of your sins." (Doctrine and Covenants 27:2) Different congregations may use either commercial bread or homemade bread prepared by members of the congregation. It is permissible to substitute rice cakes or other gluten-free breads for members who suffer from food allergies. The bread is broken into fragments just prior to being blessed by one of the officiating priests.