Rusyn (; Carpathian Rusyn: (), (); Pannonian Rusyn: (), ()), also known in English as Ruthene (, ; sometimes Ruthenian) is an East Slavic lect spoken by the Rusyns of Eastern Europe. There are several controversial theories about the nature of Rusyn as a language or dialect. Czech, Slovak, and Hungarian, as well as American and some Polish and Serbian linguists treat it as a distinct language (with its own ISO 639-3 code), whereas other scholars (especially in Ukraine but also Poland, Serbia, and Romania) treat it as a Southwestern dialect of Ukrainian.

Pannonian Rusyn is spoken by the Pannonian Rusyns in Vojvodina in Serbia, and in a nearby part of Croatia. Carpathian Rusyn is spoken in: * the Transcarpathian Region of Ukraine * northeastern Slovakia * Poland (traditionally in the southeast, but now mainly scattered throughout the north and west). The variety of Rusyn spoken in Poland is generally known as ''Lemko'' ( ), after the characteristic word () meaning "only", "but", and "like" * Hungary (where the people and language are called ''ruszin'' in Hungarian) * northern Maramureș, Romania, where the people are called ''Ruteni'' and the language ''Ruteană'' in Romanian

The classification and identification of the Rusyn language is historically and politically problematic. Before World War I, Rusyn people were recognized as Ukrainians of Galicia within the Austro-Hungarian Empire; however, in the Hungarian part they were recognized as Rusyns/Ruthenes. After the war, the former Austria and Hungary was partitioned, and Carpathian Ruthenia was appended to the new Czechoslovak state as its easternmost province. With the advent of World War II, Carpatho-Ukraine declared its independence, lasting not even one day, until its occupation and annexation by Hungary. After the war, the region was annexed by the Soviet Union as part of the Ukrainian SSR, which proceeded with an anti-ethnic assimilation program. Poland did the same, using internal exile to move all Ukrainians from the southern homelands to western areas incorporated from Germany, and switch everyday language to Polish, and Ukrainian at school. 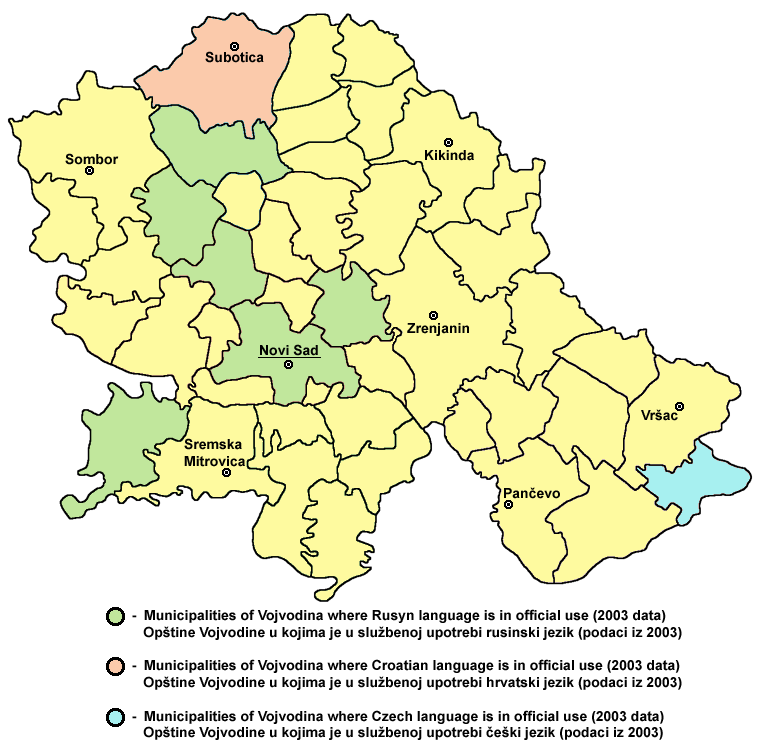 Scholars with the former Institute of Slavic and Balkan Studies in Moscow (now the Institute of Slavonic Studies of the Russian Academy of Sciences) formally acknowledged Rusyn as a separate language in 1992, and trained specialists to study the language. These studies were financially supported by the Russian Academy of Sciences. Ukrainian politicians do not recognise Rusyns as a separate ethnicity, regardless of Rusyn self-identification. Ukraine officially considers Rusyn a dialect of Ukrainian, related to the Hutsul dialect of Ukrainian. It is not possible to estimate accurately the number of fluent speakers of Rusyn; however, their number is estimated in the tens of thousands. Serbia has recognized Rusyn, more precisely Pannonian Rusyn, as an official minority language. Since 1995, Rusyn has been recognized as a minority language in Slovakia, enjoying the status of an official language in municipalities where more than 20 percent of the inhabitants speak Rusyn. Rusyn is listed as a protected language by the European Charter for Regional or Minority Languages in Bosnia and Herzegovina, Croatia, Hungary, Romania, Poland (as Lemko), Serbia and Slovakia.

Early grammars include Dmytrij Vyslockij's (Дмитрий Вислоцкий) ''Карпаторусский букварь (Karpatorusskij bukvar') Vanja Hunjanky'' (1931), Metodyj Trochanovskij's ''Буквар. Перша книжечка для народных школ. (Bukvar. Perša knyžečka dlja narodnıx škol.)'' (1935)., and Ivan Harajda (1941). The archaic Harajda's grammar is currently promoted in the Rusyn Wikipedia, although part of the articles are written using other standards (see below). Currently, there are three codified varieties of Rusyn: * The Prešov variety in Slovakia (ongoing codification since 1995). A standard grammar was proposed in 1995 by Vasyl Jabur, Anna Plíšková and Kvetoslava Koporová. Its orthography is largely based on Zhelekhivka, a late 19th century variety of the Ukrainian alphabet. * The Lemko variety in Poland. A standard grammar and dictionary were proposed in 2000 by Mirosława Chomiak and Henryk Fontański. * The Pannonian Rusyn variety in Serbia and Croatia. It is significantly different from the above two in vocabulary and grammar features. It was first standardized in 1923 by G. Kostelnik. The modern standard has been developed since the 1980s by Julian Ramać, Helena Medješi and Mikhajlo Fejsa (Serbia), and Mihály Káprály (Hungary). Apart from these codified varieties, there are publications using a mixture of these standards (most notably in Hungary and in Transcarpathian Ukraine), as well as attempts to revitalize the pre-war etymological orthography with old Cyrillic letters (most notably ѣ, or ''yat); the latter can be observed in multiple edits in the Rusyn Wikipedia, where various articles represent various codified varieties.

The [] sound only exists within alteration of []. However, in the [[Lemko language|Lemko variety]], the [] sound also represents the non-palatalized L, as is the case with the Polish [[ł]]. A soft consonant combination sound [] exists more among the northern and western dialects. In the eastern dialects the sound is recognized as [], including the area on which the standard dialect is based. It is noted that a combination sound like this one, could have evolved into a soft fricative sound [].

Each of the three Rusyn standard varieties has its own Cyrillic alphabet. The table below shows the alphabet of Slovakia (Prešov) Rusyn. The alphabet of the other Carpathian Rusyn standard, Lemko (Poland) Rusyn, differs from it only by lacking ё and ї. For the Pannonian Rusyn alphabet, see Pannonian Rusyn language#Writing system. Romanization (transliteration) is given according to ALA-LC, BGN/PCGN, generic European, ISO/R9 1968 (IDS), and ISO 9. In Ukraine, usage is found of the letters о̄ and ӯ. Until World War II, the letter ѣ (їть or ''yat) was used, and was pronounced or . This letter is still used in part of the articles in the Rusyn Wikipedia.

Number of letters and relationship to the Ukrainian alphabet