thumb|A box of sweet rice flour Rice flour (also rice powder) is a form of flour made from finely milled rice. It is distinct from rice starch, which is usually produced by steeping rice in lye. Rice flour is a common substitute for wheat flour. It is also used as a thickening agent in recipes that are refrigerated or frozen since it inhibits liquid separation. 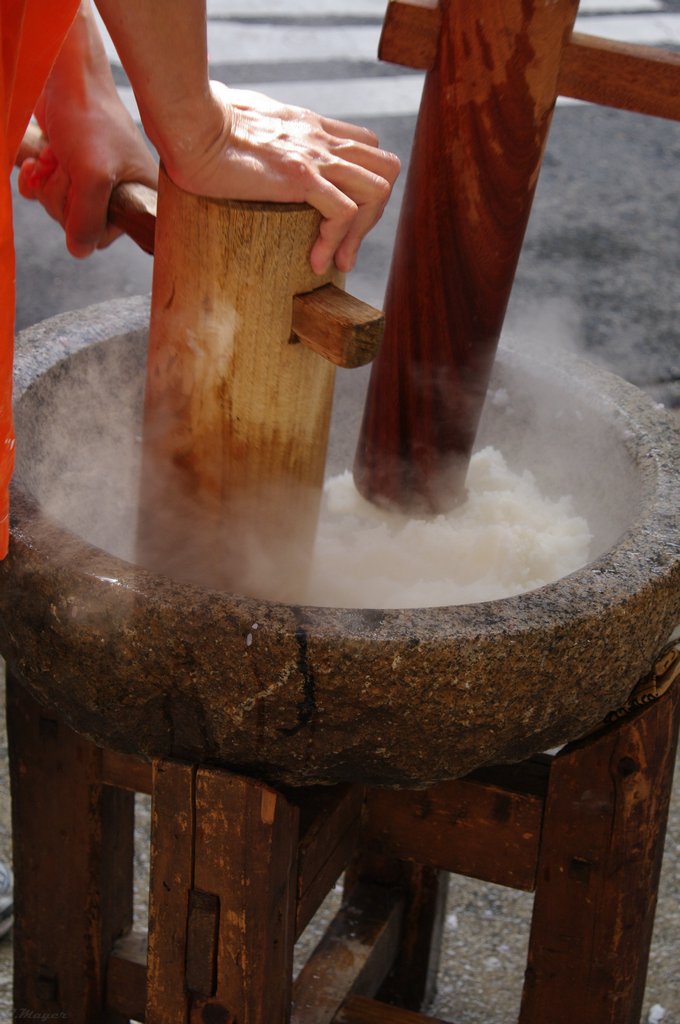 Rice flour may be made from either white rice or brown rice. To make the flour, the husk of rice or paddy is removed and raw rice is obtained, which is then ground to flour.

In the Philippines, rice flour is not traditionally prepared dry. Rather it is made by first soaking uncooked glutinous rice overnight (usually allowing it to slightly ferment) then grinding the results (traditionally with stone mills) into a rich and smooth viscous rice dough known as ''galapóng''. It is the basis for numerous types of native rice cakes and desserts (''kakanin'') in native Filipino cuisine. Depending on the dish, coconut milk (''gata''), wood ash lye, and various other ingredients may be added to the ''galapóng''. The ''galapóng'' can be prepared by baking, steaming, boiling, or frying, resulting in dishes like ''puto'' or ''bibingka''.

Rice flour has a presence in South Indian cuisine. Some of the examples include dosa, puttu, golibaje (mangalore bajji) and kori rotti. It is also mixed with wheat, millet, other cereal flours, and sometimes dried fruits or vegetables to make Manni, a kind of baby food.. It is a regular ingredient in Bangladeshi cuisine, Bengali cuisine and Assamese cuisine. It is used in making roti and desserts such as sandesh and pitha (Rice cakes or pancakes which are sometimes steamed, deep fried or pan fried and served along with grated coconut, sesame seeds, jaggery and chashni). It is also used in making Kheer (a common South Asian dessert). In Sri Lanka, it's used in making many household food products. It is used in making food products such as pittu, appa (hoppers), indi appa (string hoppers) and sweets such as kewum, kokis, athirasa and many more. Also it can be used in making bread and other bakery products.

Rice flour is known as ''pirinç unu'' in Turkish.

Rice flour is also used in the Central American dish ''pupusas'' as a substitute to regular flour.

Rice flour can be used to make confections like rice cakes, macaroons and some types of buns due to the texture and flavor it lends the finished products. It is also used for dusting confections in a manner similar to powdered sugar.

Rice flour is used in the cosmetics industry.

Brown rice flour can be combined with vermiculite for use as a substrate for the cultivation of mushrooms. Hard cakes of colonised substrate can then be fruited in a humid container. This method is often (though not always) employed by growers of edible mushrooms, as it is a very simple and low-cost method of growing mushrooms.