The name "Québec", which comes from the Algonquin or Ojibwe word ''kébec'' meaning "where the river narrows", originally referred to the area around Quebec City where the Saint Lawrence River narrows to a cliff-lined gap. Early variations in the spelling of the name included ''Québecq'' (Levasseur, 1601) and ''Kébec'' (Lescarbot, 1609). French explorer Samuel de Champlain chose the name ''Québec'' in 1608 for the colonial outpost he would use as the administrative seat for the French colony of New France. The province is sometimes referred to as "La belle province" ("The beautiful province"). The Province of Quebec was founded in the Royal Proclamation of 1763 after the Treaty of Paris formally transferred the French colony of Canada to Britain after the Seven Years' War. The proclamation restricted the province to an area along the banks of the Saint Lawrence River. The Quebec Act of 1774 expanded the territory of the province to include the Great Lakes and the Ohio River Valley and south of Rupert's Land, more or less restoring the borders previously existing under French rule before the Conquest of 1760. The Treaty of Paris (1783) ceded territories south of the Great Lakes to the United States. After the Constitutional Act of 1791, the territory was divided between Lower Canada (present-day Quebec) and Upper Canada (present-day Ontario), with each being granted an elected legislative assembly. In 1840, these become Canada East and Canada West after the British Parliament unified Upper and Lower Canada into the Province of Canada. This territory was redivided into the Provinces of Quebec and Ontario at Confederation in 1867. Each became one of the first four provinces. In 1870, Canada purchased Rupert's Land from the Hudson's Bay Company and over the next few decades the Parliament of Canada transferred to Quebec portions of this territory that would more than triple the size of the province. In 1898, the Canadian Parliament passed the first Quebec Boundary Extension Act that expanded the provincial boundaries northward to include the lands of the local aboriginal peoples. This was followed by the addition of the District of Ungava through the Quebec Boundaries Extension Act of 1912 that added the northernmost lands of the Inuit to create the modern Province of Quebec. In 1927, the border between Quebec and Newfoundland and Labrador was established by the British Judicial Committee of the Privy Council. Quebec officially disputes this boundary. 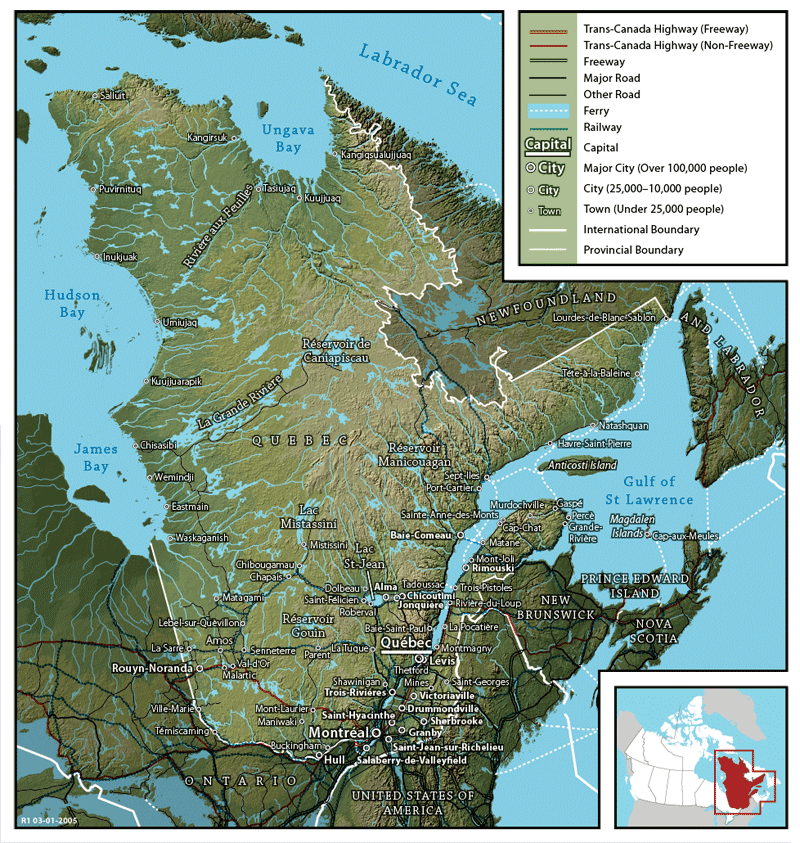 Located in the eastern part of Canada, and (from a historical and political perspective) part of Central Canada, Quebec occupies a territory nearly three times the size of France or Texas, most of which is very sparsely populated. Its topography is very different from one region to another due to the varying composition of the ground, the climate (latitude and altitude), and the proximity to water. The Saint Lawrence Lowland and the Appalachians are the two main topographic regions in southern Quebec, while the Canadian Shield occupies most of central and northern Quebec.

Quebec has one of the world's largest reserves of fresh water, occupying 12% of its surface. It has 3% of the world's renewable fresh water, whereas it has only 0.1% of its population. More than half a million lakes, including 30 with an area greater than , and 4,500 rivers pour their torrents into the Atlantic Ocean, through the Gulf of Saint Lawrence and the Arctic Ocean, by James, Hudson, and Ungava bays. The largest inland body of water is the Caniapiscau Reservoir, created in the realization of the James Bay Project to produce hydroelectric power. Lake Mistassini is the largest natural lake in Quebec. The Saint Lawrence River has some of the world's largest sustaining inland Atlantic ports at Montreal (the province's largest city), Trois-Rivières, and Quebec City (the capital). Its access to the Atlantic Ocean and the interior of North America made it the base of early French exploration and settlement in the 17th and 18th centuries. Since 1959, the Saint Lawrence Seaway has provided a navigable link between the Atlantic Ocean and the Great Lakes. Northeast of Quebec City, the river broadens into the world's largest estuary, the feeding site of numerous species of whales, fish, and seabirds. The river empties into the Gulf of Saint Lawrence. This marine environment sustains fisheries and smaller ports in the Lower Saint Lawrence (''Bas-Saint-Laurent''), Lower North Shore (''Côte-Nord''), and Gaspé (''Gaspésie'') regions of the province. The Saint Lawrence River with its estuary forms the basis of Quebec's development through the centuries. Other notable rivers include the Ashuapmushuan, Chaudière, Gatineau, Manicouagan, Ottawa, Richelieu, Rupert, Saguenay, Saint-François, and Saint-Maurice.

Quebec's highest point at metres is Mont d'Iberville, known in English as Mount Caubvick, located on the border with Newfoundland and Labrador in the northeastern part of the province, in the Torngat Mountains. The most populous physiographic region is the Saint Lawrence Lowland. It extends northeastward from the southwestern portion of the province along the shores of the Saint Lawrence River to the Quebec City region, limited to the North by the Laurentian Mountains and to the South by the Appalachians. It mainly covers the areas of the Centre-du-Québec, Laval, Montérégie and Montreal, the southern regions of the Capitale-Nationale, Lanaudière, Laurentides, Mauricie and includes Anticosti Island, the Mingan Archipelago, and other small islands of the Gulf of St. Lawrence lowland forests ecoregion. Its landscape is low-lying and flat, except for isolated igneous outcrops near Montreal called the Monteregian Hills, formerly covered by the waters of Lake Champlain. The Oka hills also rise from the plain. Geologically, the lowlands formed as a rift valley about 100 million years ago and are prone to infrequent but significant earthquakes. The most recent layers of sedimentary rock were formed as the seabed of the ancient Champlain Sea at the end of the last ice age about 14,000 years ago. The combination of rich and easily arable soils and Quebec's relatively warm climate makes this valley the most prolific agricultural area of Quebec province. Mixed forests provide most of Canada's springtime maple syrup crop. The rural part of the landscape is divided into narrow rectangular tracts of land that extend from the river and date back to settlement patterns in 17th century New France. More than 95% of Quebec's territory lies within the Canadian Shield. It is generally a quite flat and exposed mountainous terrain interspersed with higher points such as the Laurentian Mountains in southern Quebec, the Otish Mountains in central Quebec and the Torngat Mountains near Ungava Bay. The topography of the Shield has been shaped by glaciers from the successive ice ages, which explains the glacial deposits of boulders, gravel and sand, and by sea water and post-glacial lakes that left behind thick deposits of clay in parts of the Shield. The Canadian Shield also has a complex hydrological network of perhaps a million lakes, bogs, streams and rivers. It is rich in the forestry, mineral and hydro-electric resources that are a mainstay of the Quebec economy. Primary industries sustain small cities in regions of Abitibi-Témiscamingue, Saguenay–Lac-Saint-Jean, and Côte-Nord. 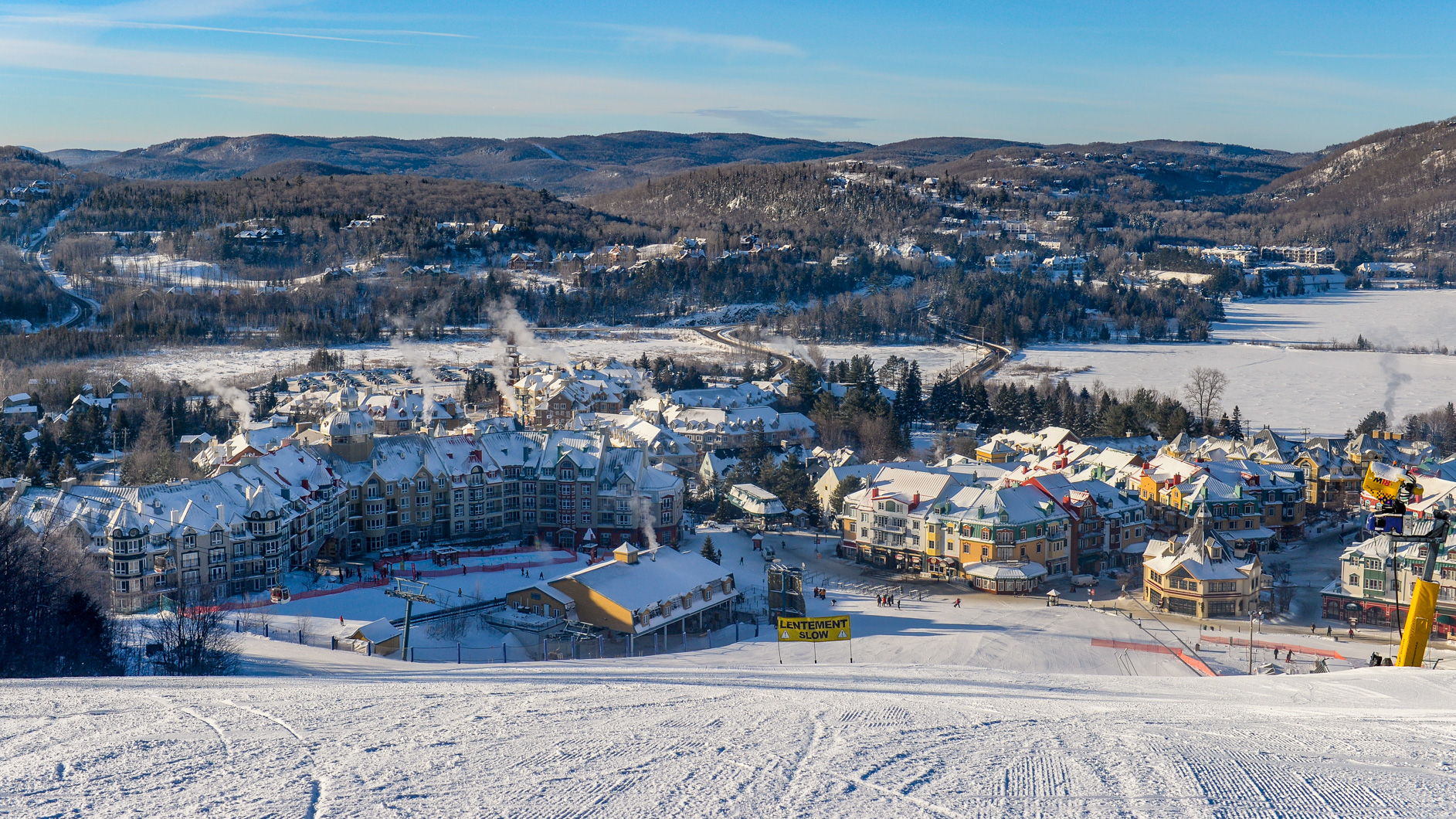 The Labrador Peninsula is covered by the Laurentian Plateau (or Canadian Shield), dotted with mountains such as Otish Mountains. The Ungava Peninsula is notably composed of D'Youville mountains, Puvirnituq mountains and Pingualuit crater. While low and medium altitude peak from western Quebec to the far north, high altitudes mountains emerge in the Capitale-Nationale region to the extreme east, along its longitude. In the Labrador Peninsula portion of the Shield, the far northern region of Nunavik includes the Ungava Peninsula and consists of flat Arctic tundra inhabited mostly by the Inuit. Further south lie the subarctic taiga of the Eastern Canadian Shield taiga ecoregion and the boreal forest of the Central Canadian Shield forests, where spruce, fir, and poplar trees provide raw materials for Quebec's pulp and paper and lumber industries. Although the area is inhabited principally by the Cree, Naskapi, and Innu First Nations, thousands of temporary workers reside at Radisson to service the massive James Bay Hydroelectric Project on the La Grande and Eastmain rivers. The southern portion of the shield extends to the Laurentians, a mountain range just north of the Saint Lawrence Lowland, that attracts local and international tourists to ski hills and lakeside resorts. The Appalachian region of Quebec has a narrow strip of ancient mountains along the southeastern border of Quebec. The Appalachians are actually a huge chain that extends from Alabama to Newfoundland. In between, it covers in Quebec near , from the Montérégie hills to the Gaspé Peninsula. In western Quebec, the average altitude is about 500 metres, while in the Gaspé Peninsula, the Appalachian peaks (especially the Chic-Choc) are among the highest in Quebec, exceeding 1000 metres.

In general, the climate of Quebec is cold and humid. The climate of the province is largely determined by its latitude, maritime and elevation influences.