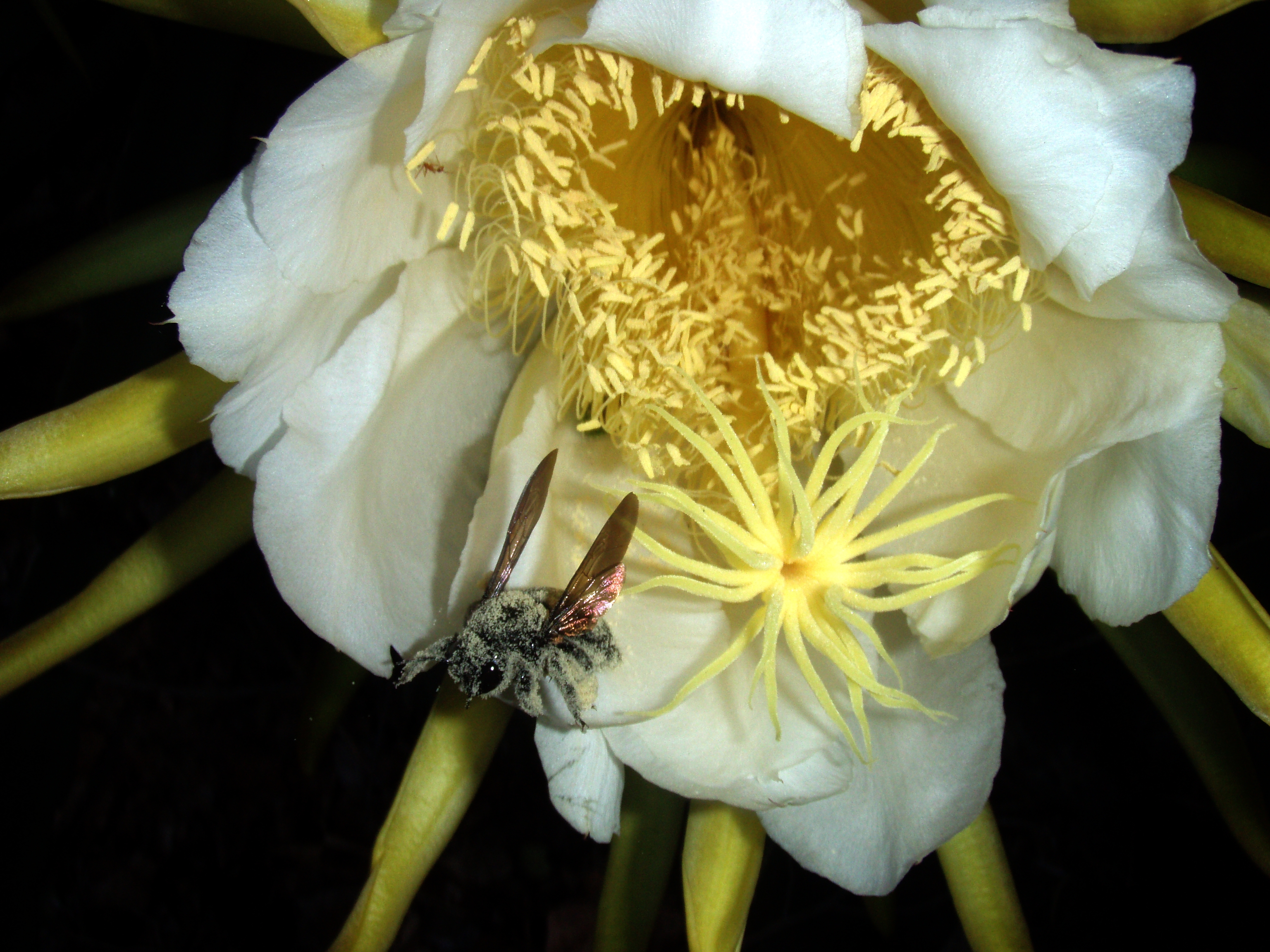 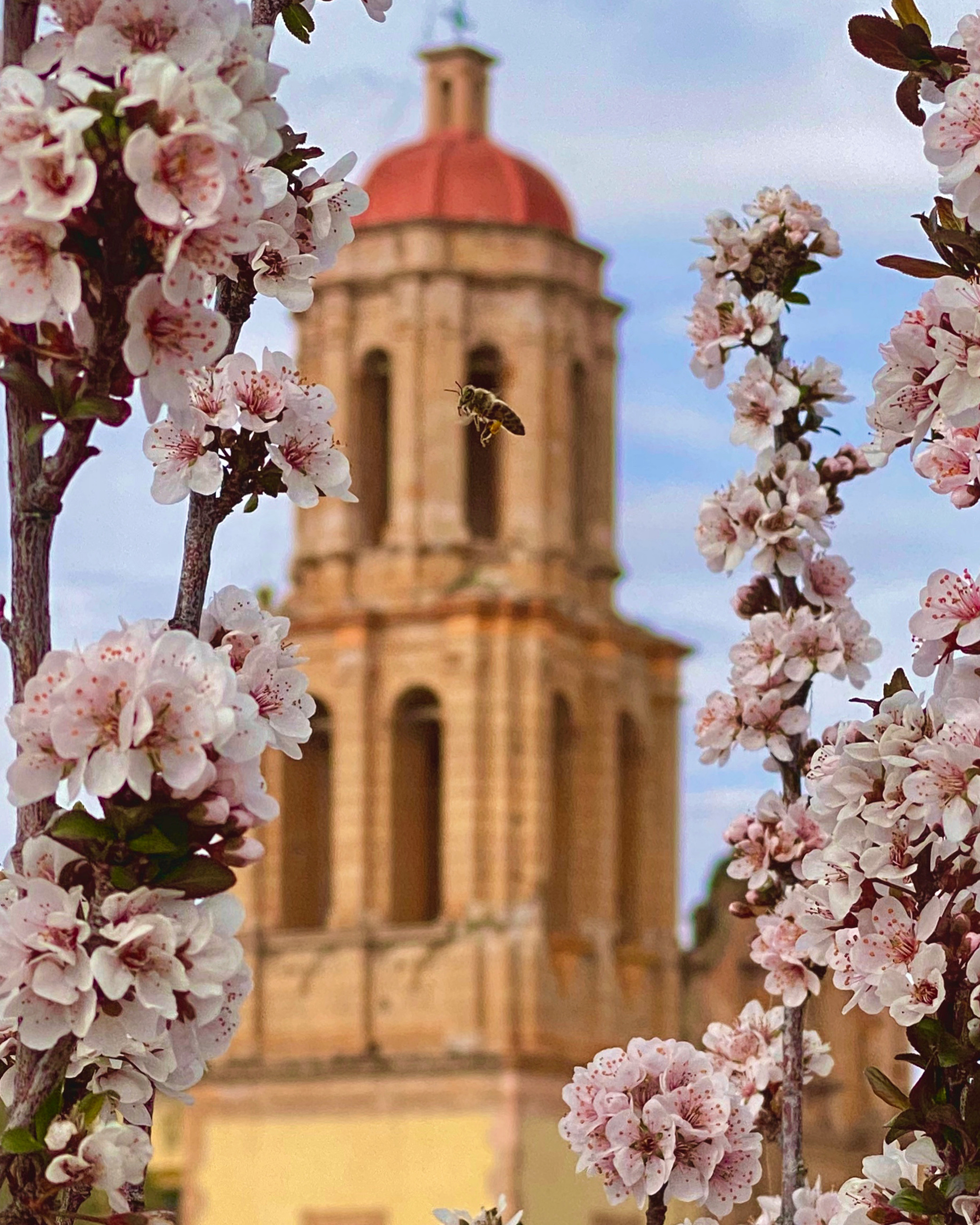 Pollination is the transfer of pollen from a male part of a plant to a female part of a plant, later enabling fertilisation and the production of seeds, most often by an animal or by wind. Pollinating agents are animals such as insects, birds, and bats; water; wind; and even plants themselves, when self-pollination occurs within a closed flower. Pollination often occurs within a species. When pollination occurs between species it can produce hybrid offspring in nature and in plant breeding work. In angiosperms, after the pollen grain (gametophyte) has landed on the stigma, it germinates and develops a pollen tube which grows down the style until it reaches an ovary. Its two gametes travel down the tube to where the gametophyte(s) containing the female gametes are held within the carpel. After entering an ovum cell through the micropyle, one male nucleus fuses with the polar bodies to produce the endosperm tissues, while the other fuses with the ovule to produce the embryo. Hence the term: "double fertilization". This process would result in the production of a seed made of both nutritious tissues and embryo. In gymnosperms, the ovule is not contained in a carpel, but exposed on the surface of a dedicated support organ, such as the scale of a cone, so that the penetration of carpel tissue is unnecessary. Details of the process vary according to the division of gymnosperms in question. Two main modes of fertilization are found in gymnosperms. Cycads and ''Ginkgo'' have motile sperm that swim directly to the egg inside the ovule, whereas conifers and gnetophytes have sperm that are unable to swim but are conveyed to the egg along a pollen tube. The study of pollination spans many disciplines, such as botany, horticulture, entomology, and ecology. The pollination process as an interaction between flower and pollen vector was first addressed in the 18th century by Christian Konrad Sprengel. It is important in horticulture and agriculture, because fruiting is dependent on fertilization: the result of pollination. The study of pollination by insects is known as ''anthecology''. There are also studies in economics that look at the positive and negative benefits of pollination, focused on bees, and how the process affects the pollinators themselves.

Pollen germination has three stages; hydration, activation and pollen tube emergence. The pollen grain is severely dehydrated so that its mass is reduced enabling it to be more easily transported from flower to flower. Germination only takes place after rehydration, ensuring that premature germination does not take place in the anther. Hydration allows the plasma membrane of the pollen grain to reform into its normal bilayer organization providing an effective osmotic membrane. Activation involves the development of actin filaments throughout the cytoplasm of the cell, which eventually become concentrated at the point from which the pollen tube will emerge. Hydration and activation continue as the pollen tube begins to grow. In conifers, the reproductive structures are borne on cones. The cones are either pollen cones (male) or ovulate cones (female), but some species are monoecious and others dioecious. A pollen cone contains hundreds of microsporangia carried on (or borne on) reproductive structures called sporophylls. Spore mother cells in the microsporangia divide by meiosis to form haploid microspores that develop further by two mitotic divisions into immature male gametophytes (pollen grains). The four resulting cells consist of a large tube cell that forms the pollen tube, a generative cell that will produce two sperm by mitosis, and two prothallial cells that degenerate. These cells comprise a very reduced microgametophyte, that is contained within the resistant wall of the pollen grain.