Pennsylvania Station, also known as New York Penn Station or simply Penn Station, is the main intercity railroad station in New York City and the busiest in the Western Hemisphere, serving more than 600,000 passengers per weekday . It is located in Midtown Manhattan, beneath Madison Square Garden in the block bounded by Seventh and Eighth Avenues and 31st and 33rd Streets, and in the James A. Farley Building, with additional exits to nearby streets. It is close to Herald Square, the Empire State Building, Koreatown, and Macy's Herald Square. Penn Station has 21 tracks fed by seven tunnels (the two North River Tunnels, the four East River Tunnels, and the single Empire Connection tunnel). It is at the center of the Northeast Corridor, a passenger rail line that connects New York City with Boston, Philadelphia, Washington, D.C., and intermediate points. Intercity trains are operated by Amtrak, which owns the station, while commuter rail services are operated by the Long Island Rail Road (LIRR) and NJ Transit (NJT). Connections are available within the complex to the New York City Subway, and buses. Penn Station is named for the Pennsylvania Railroad (PRR), its builder and original owner, and shares its name with several stations in other cities. The current facility is the remodeled underground remnant of the original Pennsylvania Station, a more ornate station building designed by McKim, Mead, and White and considered a masterpiece of the Beaux-Arts style. Completed in 1910, it enabled direct rail access to New York City from the south for the first time. Its head house was torn down in 1963, galvanizing the modern historic preservation movement. The rest of the station was rebuilt in the following six years, while retaining most of the rail infrastructure from the original station. A new direct entrance from 33rd Street to the LIRR concourse opened in December 2020, and Moynihan Train Hall, an expansion of Penn Station into a mixed-use redevelopment of the adjacent Farley Post Office building, opened in January 2021. Future plans for Penn Station include the construction of additional railway platforms in a new southern annex to accommodate two proposed Gateway Program tunnels across the Hudson River, as well as further expansion of the LIRR concourse. 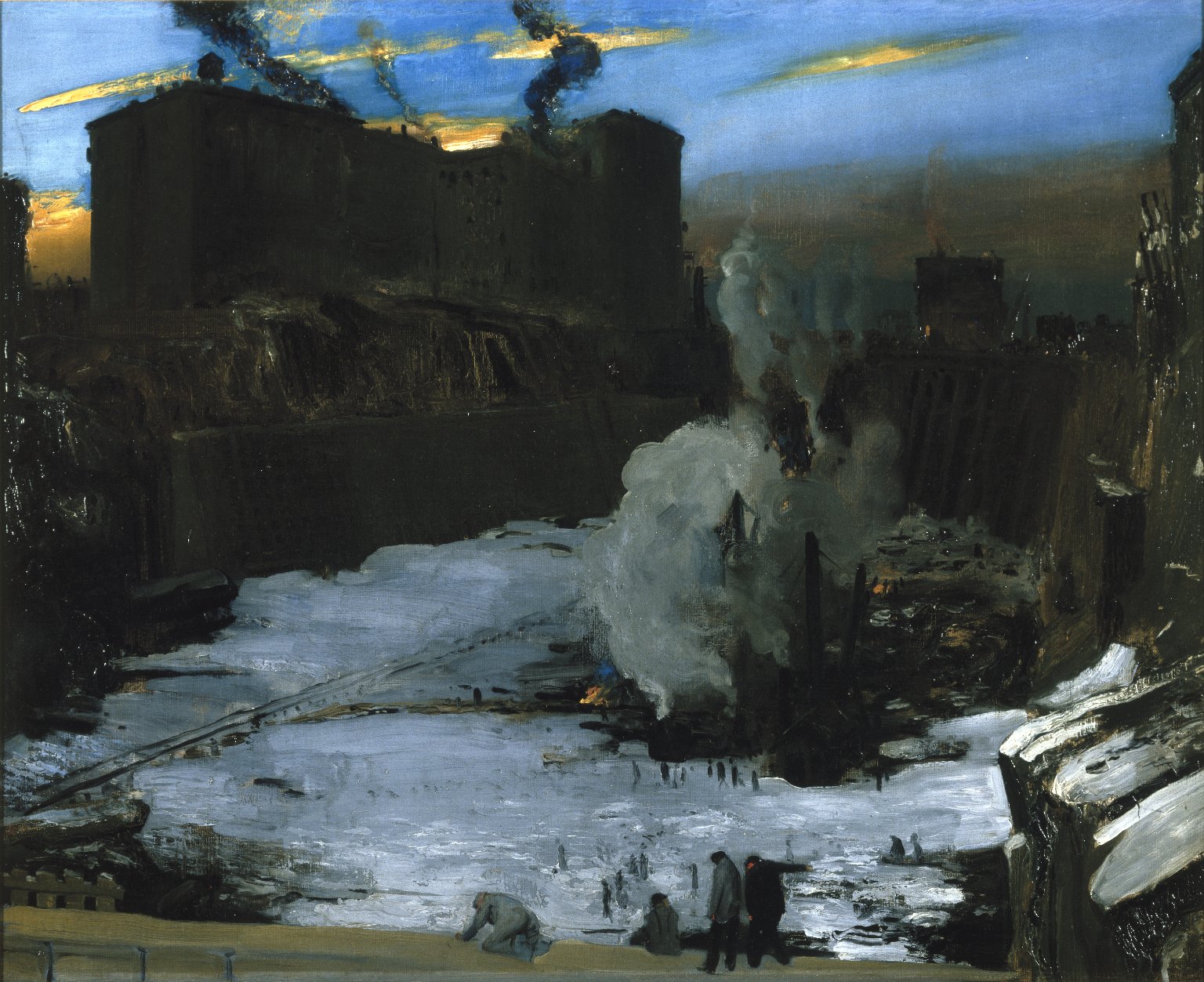 Until the early 20th century, the PRR's rail network terminated on the western side of the Hudson River (once known locally as the North River) at Exchange Place in Jersey City, New Jersey. Manhattan-bound passengers boarded ferries to cross the Hudson River for the final stretch of their journey. The rival New York Central Railroad's line ran down Manhattan from the north under Park Avenue and terminated at Grand Central Depot (later Grand Central Station, now Terminal) at 42nd Street. Many proposals for a cross-Hudson connection were advanced in the late 19th century, but financial panics in the 1870s and 1890s scared off potential investors. In any event, none of the proposals advanced during this time were considered feasible. An early proposal for a bridge was considered but rejected. The alternative was to tunnel under the river, but this was infeasible for steam locomotive use. The development of the electric locomotive at the turn of the 20th century made a tunnel feasible. In 1901, PRR president Alexander Cassatt announced the railroad's plan to enter New York City by tunneling under the Hudson and building a grand station on the West Side of Manhattan south of 34th Street. The station would sit in Manhattan's Tenderloin district, a historical red-light district known for its corruption and prostitution. Beginning in June 1903, the two single-track North River Tunnels were bored from the west under the Hudson River. A second set of four single-track tunnels, the East River Tunnels, were bored from the east under the East River, linking the new station to Queens, the PRR-owned Long Island Rail Road, and Sunnyside Yard in Queens, where trains would be maintained and assembled. Construction was completed on the Hudson River tunnels on October 9, 1906, and on the East River tunnels on March 18, 1908. 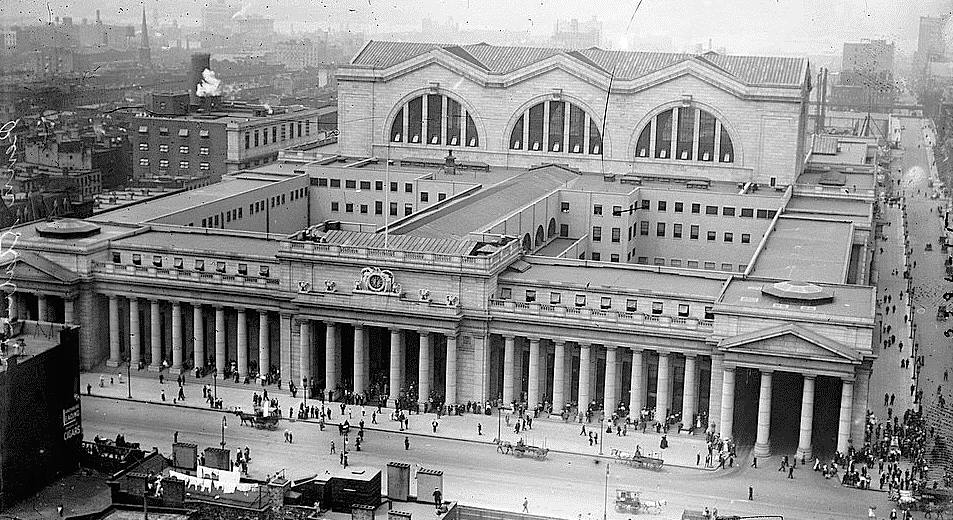 A small portion of Penn Station opened on September 8, 1910, in conjunction with the opening of the East River Tunnels, and LIRR riders gained direct railroad service to Manhattan. On November 27, 1910, Penn Station was fully opened to the public. With the station's full opening, the PRR became the only railroad to enter New York City from the south. During half a century of operation by the Pennsylvania Railroad (1910–1963), scores of intercity passenger trains arrived and departed daily to Chicago and St. Louis on “Pennsy” rails and beyond on connecting railroads to Miami and the west. Along with Long Island Rail Road trains, Penn Station saw trains of the New Haven and the Lehigh Valley Railroads. A side effect of the tunneling project was to open the city up to the suburbs, and within 10 years of opening, two-thirds of the daily passengers coming through Penn Station were commuters. The station put the Pennsylvania Railroad at comparative advantage to its competitors offering direct service from Manhattan to the west and south. Other railroads began their routes at terminals in Weehawken, Hoboken, Pavonia and Communipaw which required passengers from New York City to take the interstate Hudson Tubes (now PATH) or ferries across the Hudson River before boarding their trains. By 1945, at its peak, more than 100 million passengers a year traveled through Penn Station. By the late 1950s, intercity rail passenger volumes had declined dramatically with the coming of the Jet Age and the Interstate Highway System. The station's exterior had become somewhat grimy, and due to its vast scale, the station was expensive to maintain.