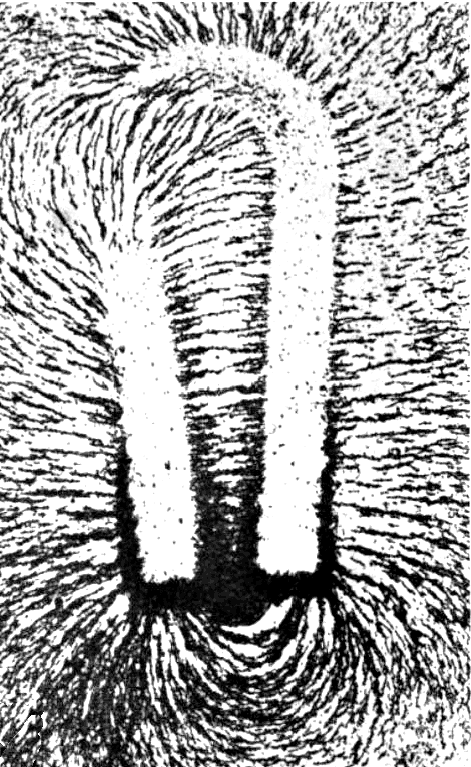 A magnetic field is a vector field that describes the magnetic influence on moving electric charges, electric currents, and magnetic materials. A moving charge in a magnetic field experiences a force perpendicular to its own velocity and to the magnetic field. A permanent magnet′s magnetic field pulls on ferromagnetic materials such as iron, and attracts or repels other magnets. In addition, a magnetic field that varies with location will exert a force on a range of non-magnetic materials by affecting the motion of their outer atomic electrons. Magnetic fields surround magnetized materials, and are created by electric currents such as those used in electromagnets, and by electric fields varying in time. Since both strength and direction of a magnetic field may vary with location, they are described as a map assigning a vector to each point of space or, more precisely—because of the way the magnetic field transforms under mirror reflection—as a field of pseudovectors. In electromagnetics, the term "magnetic field" is used for two distinct but closely related vector fields denoted by the symbols and . In the International System of Units, , magnetic field strength, is measured in the SI base units of ampere per meter (A/m). , magnetic flux density, is measured in tesla (in SI base units: kilogram per second2 per ampere), which is equivalent to newton per meter per ampere. and differ in how they account for magnetization. In a vacuum, the two fields are related through the vacuum permeability, ; but in a magnetized material, the terms differ by the material's magnetization at each point. Magnetic fields are produced by moving electric charges and the intrinsic magnetic moments of elementary particles associated with a fundamental quantum property, their spin. Magnetic fields and electric fields are interrelated and are both components of the electromagnetic force, one of the four fundamental forces of nature. Magnetic fields are used throughout modern technology, particularly in electrical engineering and electromechanics. Rotating magnetic fields are used in both electric motors and generators. The interaction of magnetic fields in electric devices such as transformers is conceptualized and investigated as magnetic circuits. Magnetic forces give information about the charge carriers in a material through the Hall effect. The Earth produces its own magnetic field, which shields the Earth's ozone layer from the solar wind and is important in navigation using a compass.

The force on an electric charge depends on its location, speed, and direction; two vector fields are used to describe this force. The first is the electric field, which describes the force acting on a stationary charge and gives the component of the force that is independent of motion. The magnetic field, in contrast, describes the component of the force that is proportional to both the speed and direction of charged particles. The field is defined by the Lorentz force law and is, at each instant, perpendicular to both the motion of the charge and the force it experiences. There are two different, but closely related vector fields which are both sometimes called the "magnetic field" written and . While both the best names for these fields and exact interpretation of what these fields represent has been the subject of long running debate, there is wide agreement about how the underlying physics work. Historically, the term "magnetic field" was reserved for while using other terms for , but many recent textbooks use the term "magnetic field" to describe as well as or in place of . There are many alternative names for both (see sidebar).

The magnetic field vector at any point can be defined as the vector that, when used in the Lorentz force law, correctly predicts the force on a charged particle at that point.: Here is the force on the particle, is the particle's electric charge, , is the particle's velocity, and × denotes the cross product. The first term in this equation is from the theory of electrostatics, and says that a particle of charge in an electric field experiences an electric force: : The second term is the magnetic force: : Using the definition of the cross product, the magnetic force can also be written as a scalar equation: : where and are the scalar magnitude of their respective vectors, and is the angle between the velocity of the particle and the magnetic field. The vector is ''defined'' as the vector field necessary to make the Lorentz force law correctly describe the motion of a charged particle. In other words, The field can also be defined by the torque on a magnetic dipole, . In SI units, is measured in teslas (symbol: T). In Gaussian-cgs units, is measured in gauss (symbol: G). (The conversion is 1 T = 10000 G.