Mae West (born Mary Jane West; August 17, 1893 – November 22, 1980) was an American actress, singer, playwright, screenwriter, comedian, and sex symbol whose entertainment career spanned seven decades. She was known for her lighthearted, bawdy double entendres and breezy sexual independence, and often used a husky contralto voice. She was active in vaudeville and on stage in New York City before moving to Los Angeles to pursue a career in the film industry. West was one of the most controversial movie stars of her day; she encountered many problems, especially censorship. She once quipped, "I believe in censorship. I made a fortune out of it." She bucked the system by making comedy out of conventional mores, and the Depression-era audience admired her for it. When her film career ended, she wrote books and plays, and continued to perform in Las Vegas and the United Kingdom, on radio and television, and recorded rock 'n roll albums. In 1999, the American Film Institute posthumously voted West the 15th greatest female screen legend of classic American cinema.

Mary Jane West was born on August 17, 1893, in Brooklyn (either Greenpoint or Bushwick, before New York City was consolidated in 1898). She was delivered at home by an aunt who was a midwife. She was the eldest surviving child of John Patrick West and Mathilde "Tillie" (later Matilda) Delker (originally Doelger; later Americanized to "Delker" or "Dilker"). Tillie and her five siblings emigrated with their parents, Jakob and Christiana (née Brüning) Doelger from Bavaria in 1886. West's parents married on January 18, 1889, in Brooklyn, to the pleasure of the groom's parents and the displeasure of the bride's, and raised their children as Protestants, although John West was of mixed Catholic–Protestant descent. West's father was a prizefighter known as "Battlin' Jack West" who later worked as a "special policeman" and later had his own private investigations agency. Her mother was a former corset and fashion model. Her paternal grandmother, Mary Jane (née Copley), for whom she was named, was of Irish Catholic descent and West's paternal grandfather, John Edwin West, was of English–Scots descent and a ship's rigger. Her eldest sibling, Katie, died in infancy. Her other siblings were Mildred Katherine West, later known as Beverly, and John Edwin West II (sometimes inaccurately called "John Edwin West, Jr.";). During her childhood, West's family moved to various parts of Woodhaven, as well as the Williamsburg and Greenpoint neighborhoods of Brooklyn. In Woodhaven, at Neir's Social Hall (which opened in 1829 and is still extant), West supposedly first performed professionally. West was five when she first entertained a crowd at a church social, and she started appearing in amateur shows at the age of seven. She often won prizes at local talent contests. She began performing professionally in vaudeville in the Hal Clarendon Stock Company in 1907 at the age of 14. West first performed under the stage name "Baby Mae", and tried various personas, including a male impersonator. She used the alias "Jane Mast" early in her career. Her trademark walk was said to have been inspired or influenced by female impersonators Bert Savoy and Julian Eltinge, who were famous during the Pansy Craze. Her first appearance in a Broadway show was in a 1911 revue ''A La Broadway'' put on by her former dancing teacher, Ned Wayburn. The show folded after eight performances, but at age 18, West was singled out and discovered by ''The New York Times''. ''The Times'' reviewer wrote that a "girl named Mae West, hitherto unknown, pleased by her grotesquerie and snappy way of singing and dancing". West next appeared in a show called ''Vera Violetta'', whose cast featured Al Jolson. In 1912, she appeared in the opening performance of ''A Winsome Widow'' as a "baby vamp" named La Petite Daffy. 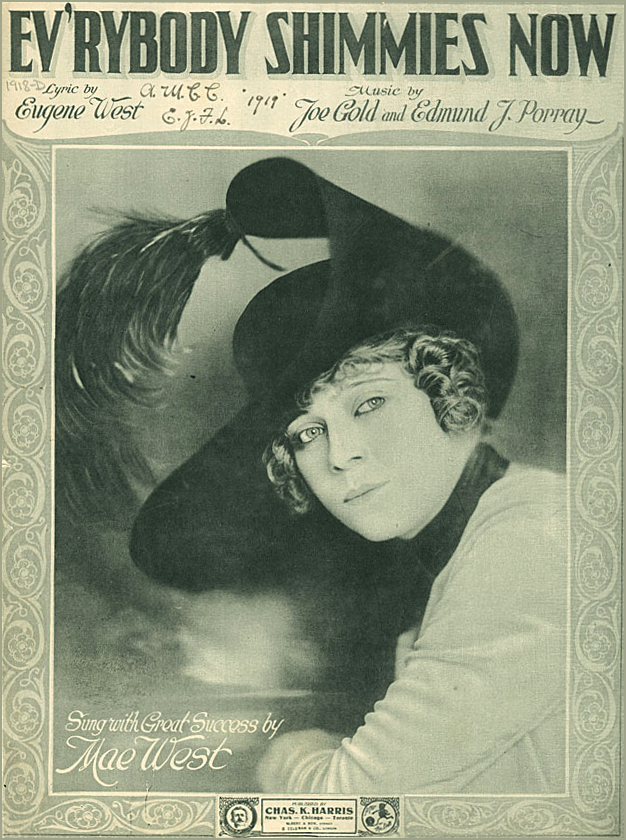 She was encouraged as a performer by her mother, who, according to West, always thought that anything Mae did was fantastic. Other family members were less encouraging, including an aunt and her paternal grandmother. They are all reported as having disapproved of her career and her choices. In 1918, after exiting several high-profile revues, West finally got her break in the Shubert Brothers revue ''Sometime'', opposite Ed Wynn. Her character Mayme danced the shimmy and her photograph appeared on an edition of the sheet music for the popular number "Ev'rybody Shimmies Now". Eventually, she began writing her own risqué plays using the pen name Jane Mast. Her first starring role on Broadway was in a 1926 play she entitled ''Sex'', which she wrote, produced, and directed. Although conservative critics panned the show, ticket sales were strong. The production did not go over well with city officials, who had received complaints from some religious groups, and the theater was raided, with West arrested along with the cast. She was taken to the Jefferson Market Court House, (now Jefferson Market Library), where she was prosecuted on morals charges, and on April 19, 1927, was sentenced to 10 days for "corrupting the morals of youth". Though West could have paid a fine and been let off, she chose the jail sentence for the publicity it would garner. While incarcerated on Welfare Island (now known as Roosevelt Island), she dined with the warden and his wife; she told reporters that she had worn her silk panties while serving time, in lieu of the "burlap" the other girls had to wear. West got great mileage from this jail stint. She served eight days with two days off for "good behavior". Media attention surrounding the incident enhanced her career, by crowning her the darling "bad girl" who "had climbed the ladder of success wrong by wrong".