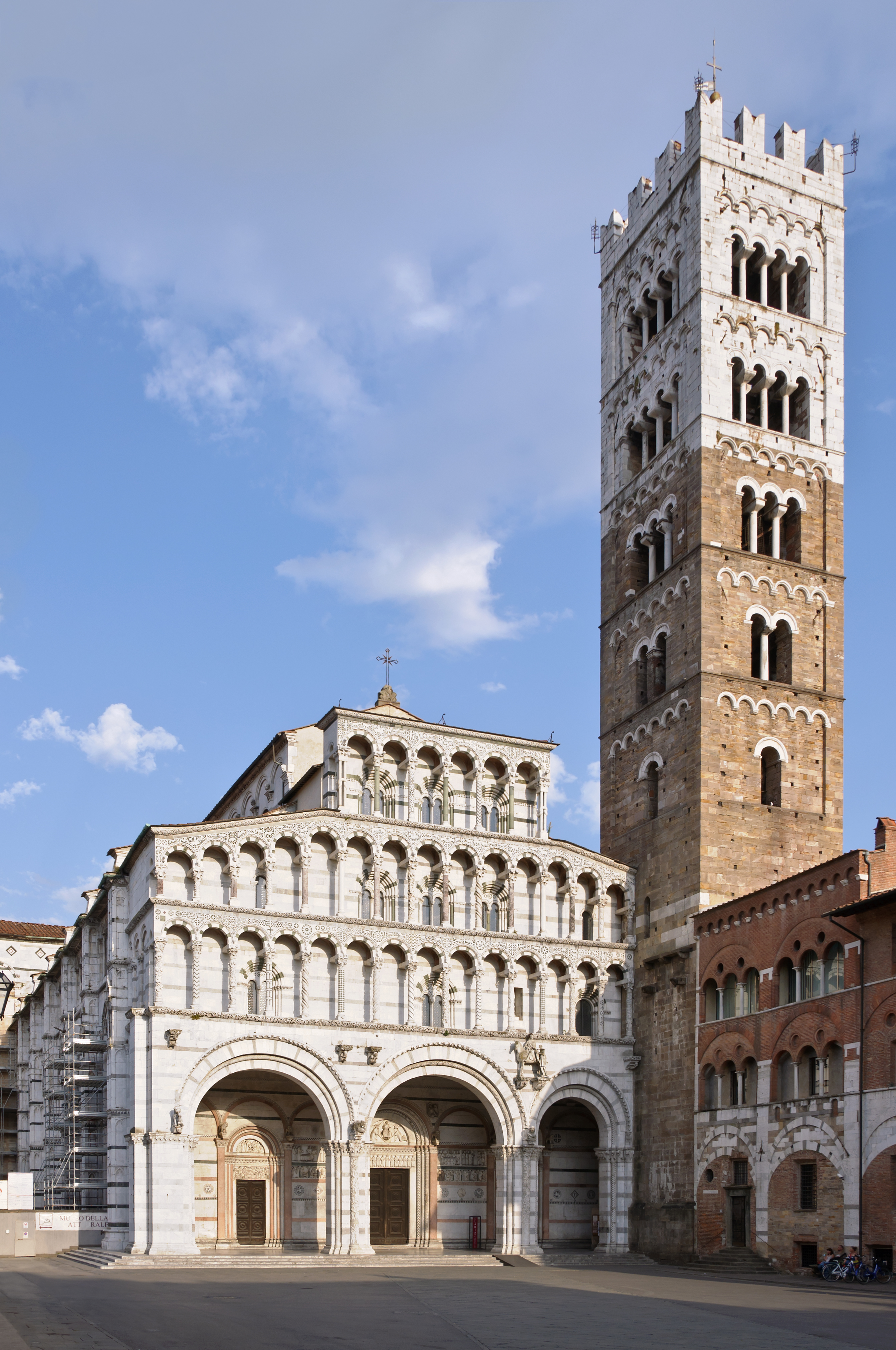 Lucca ( , ) is a city and ''comune'' in Tuscany, Central Italy, on the Serchio River, in a fertile plain near the Ligurian Sea. It is the capital of the Province of Lucca. It is famous for its intact Renaissance-era city walls.

Lucca was founded by the Etruscans (there are traces of an earlier Ligurian settlement in the 3rd century BC called ''Luk'' meaning marsh in which the name Lucca originated) and became a Roman colony in 180 BC. The rectangular grid of its historical centre preserves the Roman street plan, and the Piazza San Michele occupies the site of the ancient forum. Traces of the amphitheatre may still be seen in the Piazza dell'Anfiteatro. At the Lucca Conference, in 56 BC, Julius Caesar, Pompey, and Crassus reaffirmed their political alliance known as the First Triumvirate. Frediano, an Irish monk, was bishop of Lucca in the early sixth century. At one point, Lucca was plundered by Odoacer, the first Germanic King of Italy. Lucca was an important city and fortress even in the sixth century, when Narses besieged it for several months in 553. Under the Lombards, it was the seat of a duke who minted his own coins. The Holy Face of Lucca (or Volto Santo), a major relic supposedly carved by Nicodemus, arrived in 742. During the eighth-tenth centuries Lucca was a center of Jewish life, the community being led by the Kalonymos family (which at some point during this time migrated to Germany to become a major component of proto-Ashkenazic Jewry). Lucca became prosperous through the silk trade that began in the eleventh century, and came to rival the silks of Byzantium. During the tenth–eleventh centuries Lucca was the capital of the feudal margraviate of Tuscany, more or less independent but owing nominal allegiance to the Holy Roman Emperor.

After the death of Matilda of Tuscany, the city began to constitute itself an independent commune with a charter in 1160. For almost 500 years, Lucca remained an independent republic. There were many minor provinces in the region between southern Liguria and northern Tuscany dominated by the Malaspina; Tuscany in this time was a part of feudal Europe. Dante’s ''Divine Comedy'' includes many references to the great feudal families who had huge jurisdictions with administrative and judicial rights. Dante spent some of his exile in Lucca. In 1273 and again in 1277, Lucca was ruled by a Guelph ''capitano del popolo'' (captain of the people) named Luchetto Gattilusio. In 1314, internal discord allowed Uguccione della Faggiuola of Pisa to make himself lord of Lucca. The Lucchesi expelled him two years later, and handed over the city to another ''condottiero'', Castruccio Castracani, under whose rule it became a leading state in central Italy. Lucca rivalled Florence until Castracani's death in 1328. On 22 and 23 September 1325, in the battle of Altopascio, Castracani defeated Florence's Guelphs. For this he was nominated by Louis IV the Bavarian to become duke of Lucca. Castracani's tomb is in the church of San Francesco. His biography is Machiavelli's third famous book on political rule. Occupied by the troops of Louis of Bavaria, the city was sold to a rich Genoese, Gherardino Spinola, then seized by John, king of Bohemia. Pawned to the Rossi of Parma, by them it was ceded to Mastino II della Scala of Verona, sold to the Florentines, surrendered to the Pisans, and then nominally liberated by the emperor Charles IV and governed by his vicar. In 1408, Lucca hosted the convocation intended to end the schism in the papacy. Lucca managed, at first as a democracy, and after 1628 as an oligarchy, to maintain its independence alongside of Venice and Genoa, and painted the word ''Libertas'' on its banner until the French Revolution in 1789.

Lucca had been the second largest Italian city state (after Venice) with a republican constitution ("comune") to remain independent over the centuries. Between 1799 and 1800 it was contended by the French and Austrian armies. Finally the French prevailed and granted a democratic constitution in the 1801. Howeverer, already in 1805 the Republic of Lucca was converted into a monarchy by Napoleon, who installed his sister Elisa Bonaparte Baciocchi as "Princess of Lucca". From 1815 to 1847 it was a Bourbon-Parma duchy. The only reigning dukes of Lucca were Maria Luisa of Spain, who was succeeded by her son Charles II, Duke of Parma in 1824. Meanwhile, the Duchy of Parma had been assigned for life to Marie Louise, Duchess of Parma, the second wife of Napoleon. In accordance with the Treaty of Vienna (1815), upon the death of Marie Louise, Duchess of Parma in 1847, Parma reverted to Charles II, Duke of Parma, while Lucca lost independence and was annexed to the Grand Duchy of Tuscany. As part of Tuscany, it became part of the Kingdom of Sardinia in 1860 and finally part of the Italian State in 1861.

In 1942, during World War II, a prisoner-of-war camp was established at the village of Colle di Compito, in the municipality of Capannori, about from Lucca. Its official number was P.G. (''prigionieri di guerra'') 60, and it was usually referred to as PG 60 Lucca. Although it never had permanent structures and accommodation consisted of tents in an area prone to flooding, it housed more than 3,000 British and Commonwealth prisoners of war during the period of its existence. It was handed over to the Germans on 10 September 1943, not long after the signing of the Italian armistice. During the Italian Social Republic, as a puppet state of the Germans, political prisoners, foreigners, common law prisoners and Jews were interned there, and it functioned as a concentration camp. In June 1944 the prisoners were moved to Bagni di Lucca.