Guayaquil was founded on July 25, 1538 in the location of a native village with the name ''Muy Noble y Muy Leal Ciudad de Santiago de Guayaquil'' (Most Noble and Most Loyal City of Santiago of Guayaquil) by Spanish conqueror Francisco de Orellana. In 1687, Guayaquil was attacked and looted by English and French pirates under the command of George d'Hout (English) and Picard and Groniet (French). Of more than 260 pirates, 35 were killed and 46 were wounded; 75 defenders of the city died and more than 100 were wounded. In 1709, the English captains Woodes Rogers, Etienne Courtney, and William Dampier, along with a crew of 110, looted Guayaquil and demanded ransom; however, they departed suddenly and without collecting the ransom after an epidemic of yellow fever broke out. In colonial times Guayaquil was the chief Spanish shipyard in the Pacific, although some navigators considered that Valdivia (now in Chile) had better conditions. On October 9, 1820, almost without bloodshed, a group of civilians, supported by soldiers from the "Granaderos de Reserva" battalion quartered in Guayaquil, overwhelmed the resistance of the Royalist guards and arrested the Spanish authorities. Guayaquil declared independence from Spain, becoming Provincia Libre de Guayaquil, and José Joaquín de Olmedo was named ''Jefe Civil'' (Civilian Chief) of Guayaquil. On July 26, 1822, José de San Martín and Simón Bolívar held a meeting in Guayaquil to plan the future of the independent South America. In 1829, the city was invaded by the Peruvian Army, which occupied it for seven months. In 1860, the city was the site of the Battle of Guayaquil, the last of a series of military conflicts between the forces of the Provisional Government, led by Gabriel García Moreno and General Juan José Flores, and the forces of the Supreme Chief of Guayas, General Guillermo Franco, whose government was recognized as possessing sovereignty over the Ecuadorian territory by Peruvian president Ramón Castilla. Moreno's forces were victorious, countering Peruvian influence over Ecuador. In 1896, large portions of the city were destroyed by a major fire. On July 8, 1898, the Guayaquil City Hall "Muy Ilustre Municipalidad de Guayaquil" officially recognized the anthem written by José Joaquín de Olmedo in 1821, with the music composed by Ana Villamil Ycaza in 1895, as the "Himno al 9 de Octubre" Canción al Nueve de Octubre, most widely known now as the "Himno a Guayaquil" (Guayaquil Anthem). In 1922, workers in the city went on a general strike lasting three days, ending after at least 300 people were killed by military and police. In 2020, the city was hit hard by the coronavirus pandemic. Its medical and mortuary services were overwhelmed to the point where bodies lay in the streets. Almost 6,000 more deaths were recorded in the first two weeks of April than the average for the time of year.

''Guayaquileños main sources of income are formal and informal trade, business, agriculture and aquaculture. Most commerce consists of small and medium businesses, adding an important informal economy occupation that gives thousands of guayaquileños employment. The Port of Guayaquil is Ecuador's most important commercial port; most international import and export merchandise passes through the Gulf of Guayaquil. As the largest city in the country, most industries are located either in the city or its peripheral areas. Ongoing projects seek urban regeneration as a principal objective of the growth of the city's commercial districts, as the increase of capital produces income. These projects in the city driven by the recent mayors have achieved this goal after investing large sums of money. The current municipal administration aims to convert Guayaquil into a place for first-class international tourism and multinational businesses.

Guayaquil's mayor was Cynthia Viteri, the second elected female mayor in the city's history, the first being Elsa Bucaram in 1988. Previous mayor Jaime Nebot supported her. He began a campaign of construction projects for the city in the early 2000s to attract tourism, that included the "urban regeneration" plan which reconstructed the city's main tourist streets' sidewalks and upgraded the city's chaotic transit system with multiple infrastructure projects (speedways, bridges, overhead passages, tunnels, etc.). In August 2006, the city's first rapid transit bus system, Metrovia, opened to provide a quicker, high-capacity service. One of the main projects was called ''Malecón 2000'' , the renovation of the waterfront promenade (''malecón'') along the Guayas River. Another project was the creation of the'' Nuevo Parque Histórico'', a park in a housing development area that is called ''Entre Ríos'' because it lies between the Daule and Babahoyo Rivers (which merge to form the Guayas River), in a mangrove wetland area. The park cost the city about US$7 million. In 2013, the national government led by Rafael Correa built two pedestrian bridges connecting downtown Guayaquil, Santay Island, and the town of Durán, to allow people to make ecotourism trips and return the same day.

Guayaquil is the nation's largest city and the capital of Guayas Province. It is on the Guayas River about north of the Gulf of Guayaquil, near the Equator. Guayaquil is constantly facing tsunami and major earthquake threats due to its soil stratigraphy and location near the Gulf of Guayaquil and the south of the North-Andean subduction zone. The city can be easily damaged by earthquakes as its weak and compressible soil is composed of deep soft sediments over hard rocks and deposits in a brackish environment. Also, the city itself is strongly affected by the subduction of the active Ecuadorian margin, an intraplate region where active faults locate; and the Guayaquil-Babahoyo strike-slip fault system, formed as the North Andean Block drifts northward. The tsunami threat is caused by the nearby Gulf of Guayaquil which also is one of the major locations on the Earth where earthquakes tend to happen all the time. It has complex tectonic features such as the Posorja and the Jambeli –two major east–west trending detachment systems; the Puna-Santa Clara northeast-southwest trending fault system; and the Domito north-south trending fault system; that have developed since the Pleistocene times. Tsunami threats are only predicted for coastal farming zones, not the main populated areas. 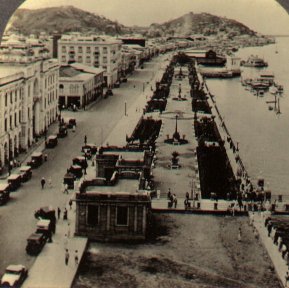 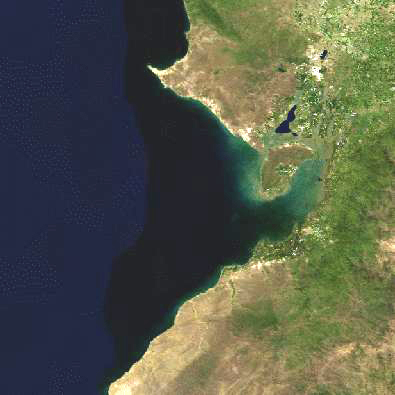 thumb|Las Peñas neighborhood. Here you can find the list o
Neighborhoods and Parishes of Guayaquil

Guayaquil features a tropical savanna climate (Köppen: ''Aw''). Between January and April, the climate is hot and humid with heavy rainfall, especially during El Niño years when it increases dramatically and flooding usually occurs. The rest of the year (from May through December), however, rainfall is minimal due to the cooling influence of the Humboldt Current, with usually cloudy mornings and afternoons, and evening breezes. Guayaquil, along with most of the coastal region, was impacted by the April 16, 2016 earthquake of 7.8 magnitude. A bridge that was above a major artery, Avenida de las Americas, collapsed in the early evening of April 16, killing two people. 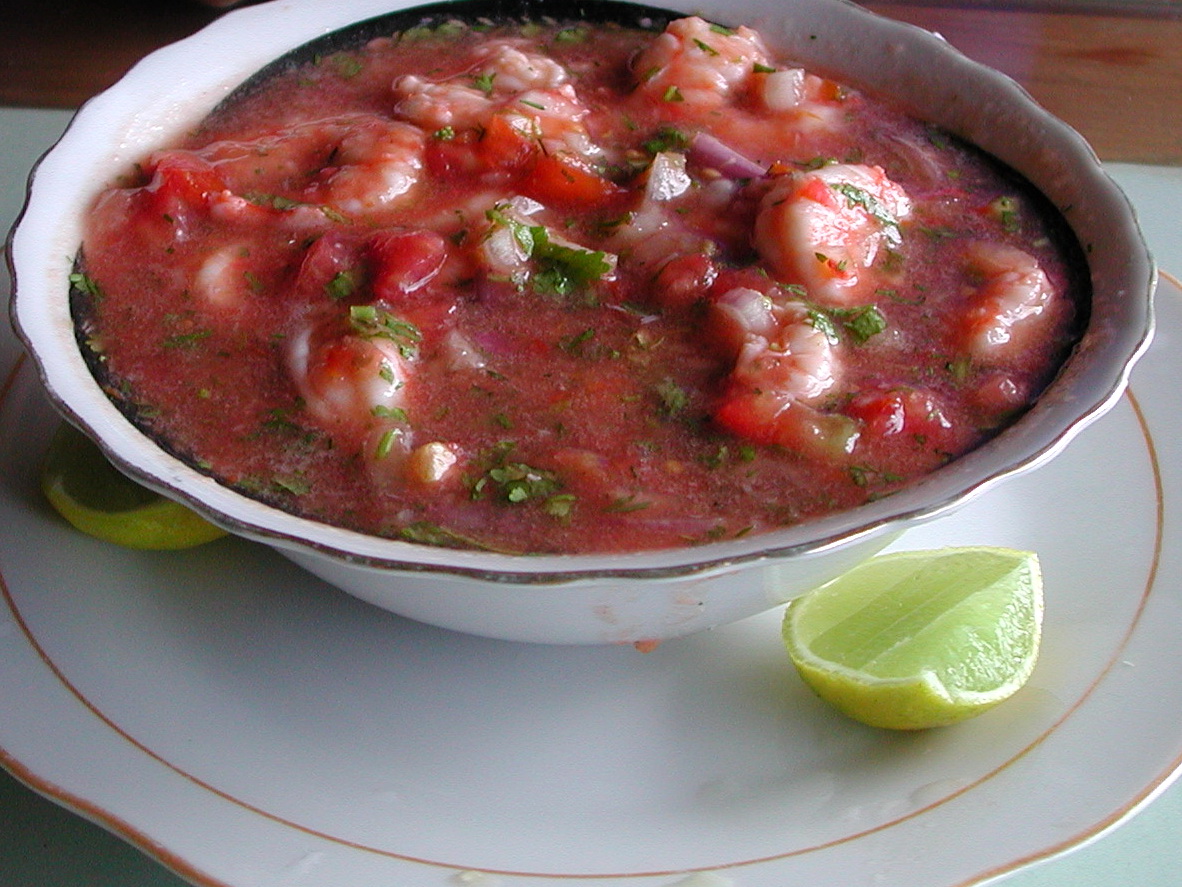 Typical Guayaquil cuisine includes mostly seafood dishes such as encebollado, ceviche, cazuela, and encocado (shrimp or tuna with a coconut sauce and rice). During breakfast, Patacones and bolon (fried plantain with cheese mashed and given a rounded shape) play a big role. Pan de yuca is a typical snack in Guayaquil. Some other typical dishes of Guayaquil are the ball soup (based on peanuts and green plantains creating a green plantain ball filled with meat and other ingredients). El bollo is another typical dish of this city that also the main ingredient is the green plantain and seafood. Just to mention others are the biche, sango de mariscos, Arroz con pezcado frito (rice with fried fish), Arroz con menestra y carne asada (rice with stew and roast meat), Ayaca, Guatita, Caldo de mondongo, Humitas, Maduro lampriado, Maduro con queso, Tripita, and many more. The gastronomy of Guayaquil has put Ecuador as one of the countries, if not the first country with the best recognition in food worldwide.

The largest religion in Guayaquil is Roman Catholicism.

There are two major association football clubs; the Barcelona Sporting Club and the Club Sport Emelec. Each club has its own stadium; the Estadio Monumental Banco Pichincha is the home of the "Barcelonistas" while the Estadio George Capwell is the home of the "Emelecistas". These two teams have a long history of rivalry in Guayaquil and when these two teams play against each other the game is called "El Clásico del Astillero". The city is the birthplace of Francisco Segura Cano; and Andrés Gómez and Nicolás Lapentti, Ecuador's two most successful tennis players, now both retired. The "Abierto de Tenis Ciudad de Guayaquil" is a tennis tournament organised in Guayaquil by Gómez and Luis Morejon, and held annually in November. Another major event in the city is the Guayaquil Marathon, which has been held every year on the first weekend of October since 2005. These race is certified by the (AIMS) Association of International Marathons and Distance Races. The sports & Ecological Park calle
Parque Samanes de Guayaquil
is a park with courts for soccer, tennis, volleyball, and basketball, two lakes, a soccer stadium and an amphi theatre for open air concerts and events. It is connected to a forest reserve with trails for cycling and walking, as well as installations for Climbing and zip-lining.

Th
Malecón 2000
is a restoration project of the historic Simón Bolívar Pier. It will be a symbolic centre of the city, a mix of green areas and shopping. The tall ship ''Guayas'' has its home base here. The Palacio Municipal is located in front of the Malecón and holds the political offices of city and provincial officials. Built in a neoclassical style, it is considered one of the most important architectural works in the country. E
Barrio las Peñas
is a neighbourhood in the northeast corner of the city centre; is the artistic centre of the city. Many of the area's 400-year-old houses have been converted into art galleries and several notable artists have studios in the area. The Mercado Artesanal is the largest artisan market in the city. The market is housed in a 240-shop building that takes up an entire block. Parque Centenario is located on ''Av. 9 de Octubre'', between ''Lorenzo de Garaycoa'' and ''Pedro Moncayo''. This is the largest park in the town centre, occupying four city blocks. A large Statue of Liberty dominates the central area of the park.
Parque Seminario
(also known a
''Parque de Las Iguanas'' or Iguana Park
is home to many iguanas (''Iguana iguana''), some of which approach in length. Tourists and locals alike often feed the iguanas mango slices from park vendors. An equestrian statue of Simón Bolívar is located in the centre of the park. Urdesa is a traditional neighborhood, for stores an
restaurants in Guayaquil
. There are a number of forest reserves in and around the city, among them Cerro Blanco Forest, nearby Parque Lago with a big lake where kayaking is practised, Cerro Colorado with the botanical garden, the forest reserve of Samanes, Cerro Paraíso with a viewpoint, the small park Palo Santo in the city, and at the outskirts Papagayo, Prosperina, and Bosqueira. Close to the city there are Isla Santay and the Parque Histórico in Samborondón with a zoo. Guayaquil Municipal Museum Montañita (also known as "Little Amsterdam") is a small surfer town located in Santa Elena Península. Known for its nightlife, Montañita attracts thousands of tourists from all over the world (mainly Western Europe) with its incessant partying, affordable food and drinks, and its key location by the beach.

Guayaquil is located along national Highway 40 and is near Highway 25. Among Guayaquil's major trading points are the seaport, the largest in Ecuador and one of the biggest handlers of shipping on the shores of the Pacific; and José Joaquín de Olmedo International Airport. José Joaquín de Olmedo International Airport, though using the same runways, had its passenger terminal completely rebuilt in 2006 and was renamed. The old passenger terminal is now a convention centre. Guayaquil is served by a bus rapid transit system, Metrovia, which opened in 2006. The system has three lines and is supplemented by 35 feeder routes, carrying a total of 400,000 daily passengers.

*
Images of Guayaquil before and After