The Great Basin is the largest area of contiguous endorheic watersheds in North America. It spans nearly all of Nevada, much of Oregon and Utah, and portions of California, Idaho, Wyoming, and Baja California, Mexico. It is noted for both its arid climate and the basin and range topography that varies from the North American low point at Badwater Basin in Death Valley to the highest point of the contiguous United States, less than away at the summit of Mount Whitney. The region spans several physiographic divisions, biomes, ecoregions, and deserts. 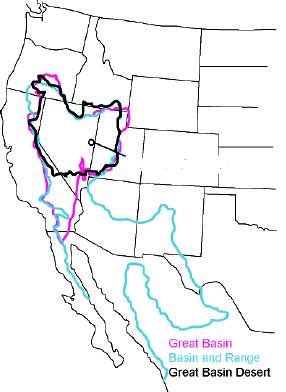 The term "Great Basin" is applied to hydrographic,