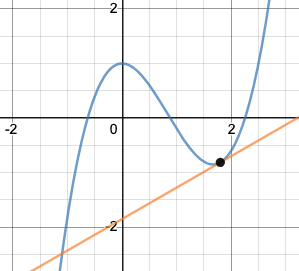 The concept of a derivative in the sense of a tangent line is a very old one, familiar to Greek geometers such as Euclid (c. 300 BC), Archimedes (c. 287–212 BC) and Apollonius of Perga (c. 262–190 BC). Archimedes also introduced the use of infinitesimals, although these were primarily used to study areas and volumes rather than derivatives and tangents; see Archimedes' use of infinitesimals. The use of infinitesimals to study rates of change can be found in Indian mathematics, perhaps as early as 500 AD, when the astronomer and mathematician Aryabhata (476–550) used infinitesimals to study the orbit of the Moon. The use of infinitesimals to compute rates of change was developed significantly by Bhāskara II (1114–1185); indeed, it has been argued that many of the key notions of differential calculus can be found in his work, such as "Rolle's theorem". The Islamic mathematician, Sharaf al-Dīn al-Tūsī (1135–1213), in his ''Treatise on Equations'', established conditions for some cubic equations to have solutions, by finding the maxima of appropriate cubic polynomials. He proved, for example, that the maximum of the cubic occurs when , and concluded therefrom that the equation has exactly one positive solution when , and two positive solutions whenever . The historian of science, Roshdi Rashed, has argued that al-Tūsī must have used the derivative of the cubic to obtain this result. Rashed's conclusion has been contested by other scholars, however, who argue that he could have obtained the result by other methods which do not require the derivative of the function to be known. The modern development of calculus is usually credited to Isaac Newton (1643–1727) and Gottfried Wilhelm Leibniz (1646–1716), who provided independent and unified approaches to differentiation and derivatives. The key insight, however, that earned them this credit, was the fundamental theorem of calculus relating differentiation and integration: this rendered obsolete most previous methods for computing areas and volumes, which had not been significantly extended since the time of Ibn al-Haytham (Alhazen).